5 from 1 vote
Published Dec 17, 2022Last Updated Dec 17, 2022
Jump to Recipe
Pin RecipeLeave a Comment
A Coconut White Russian is a perfectly festive twist on a classic cocktail that features equal parts of Kahlúa, vodka, and cream, or in this case coconut milk. This Coconut White Russian is served in a rocks glass rimmed with toasted coconut and honey and delivers max cozy vibes.
Prep Time: 5 minutes 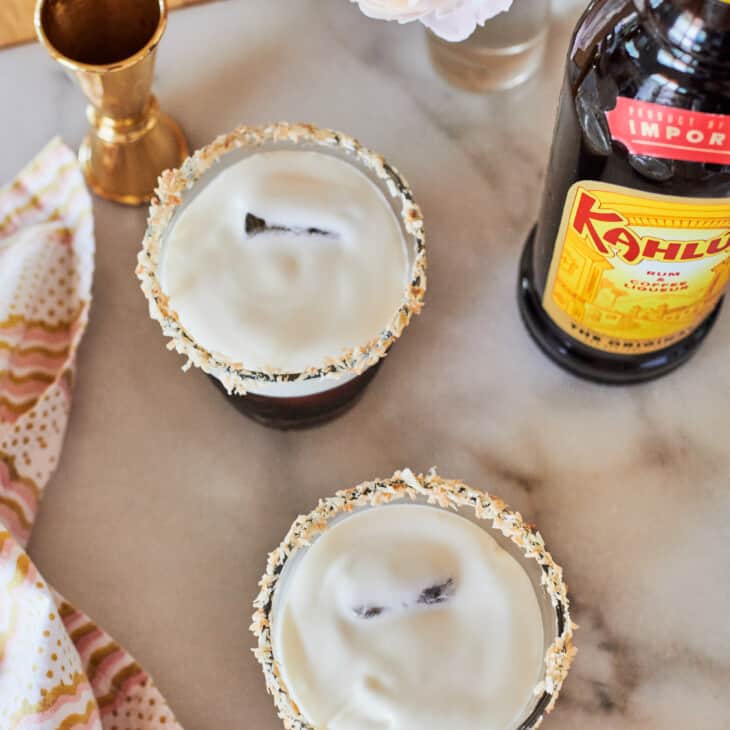 You may have discovered this drink from The Dude in the Coen Brothers’ “The Big Lebowski”. He drank many White Russians, or “Caucasians” as he called them while wearing his iconic bathrobe.

WHAT IS A WHITE RUSSIAN?

A White Russian is a classic cocktail made with three ingredients: Kahlúa, vodka, and cream, which is believed to have been created sometime in the 1950s or 1960s and was popular during the disco era. It fell out of fashion shortly after but regained some notoriety after the Coen Brothers’ film “The Big Lebowski” in 1998 thanks to the main character, The Dude’s, love for the beverage.

According to the official Kahlua website, the drink is made with equal parts Kahlúa, vodka, and cream, though I’ve seen many variations in ratios. I’ve decided to keep with equal parts, but feel free to make this recipe your own and play with the ratios.

WHAT IS A COCONUT WHITE RUSSIAN?

HOW TO MAKE A COCONUT WHITE RUSSIAN

As with most recipes that have short ingredient lists, the quality of ingredients matters so use your favorite brand of Vodka and canned coconut milk. I recommend chilling your coconut before frothing for best results. A handheld frothing wand is very inexpensive and makes quick work of cold foams for this drink and any other cold foam beverage.