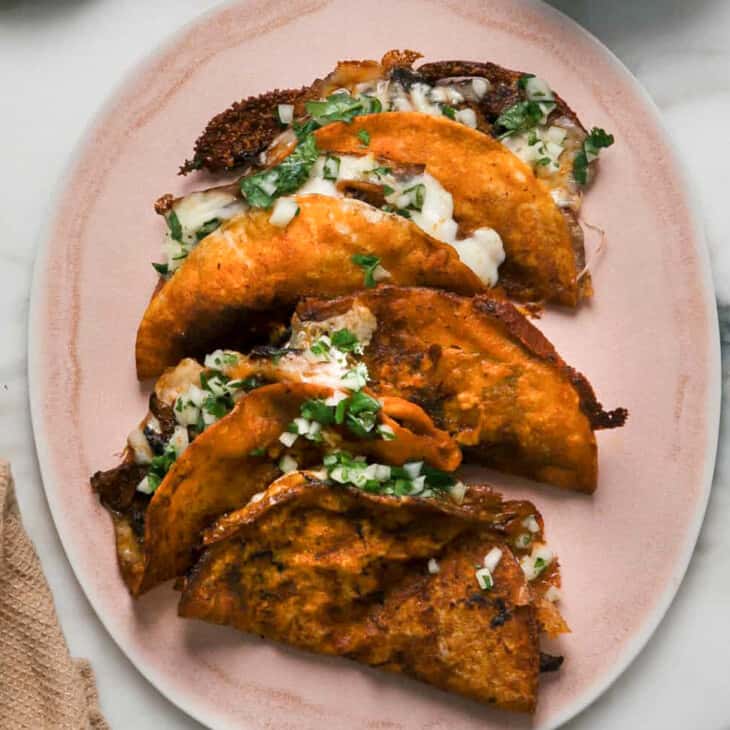 This Birria Tacos (tacos de birria aka quesatacos) recipe is juicy, cheesy, delicious—a true showstopper. It begins with braising a birria de rez and then making a consomé and frying up tacos with Oaxacan (or mozzarella) cheese. Instructions for oven, Instant Pot and slow-cooker methods are all included!

I first saw these very famous Birria Tacos on Tiktok during qu*rantine when I was looking for mini adventures to go on. I was like, hmm, what are birria tacos?!? Obviously I knew what birria was.

So, after I saw someone eat them from a taco truck on Tiktok and quickly googled “Birria tacos near me” and luckily there were some results! I hopped in my car and headed to the valley. I consumed them, consome dripping down my chin and it was HEAVEN.

Traditionally there is no chicken in sight, but if you wanted to use chicken, you absolutely could!

Birria Tacos (tacos de birria and sometimes called quesabirria tacos) consists of the braised meat inside a corn tortilla that’s been pan-fried in the fat that sits at the top of the birria. You may be asking yourself: are birria tacos spicy? I say not really. BUT, please keep in mind that I am Peruvian and this means I grew up with spicy food so my tolerance is quite high.

All of these ingredients can be found at your local Latin market and you’re truly not making tacos de birria without these dried peppers. They are essential!

Looking for more Latin recipes? Here are a few favorites: