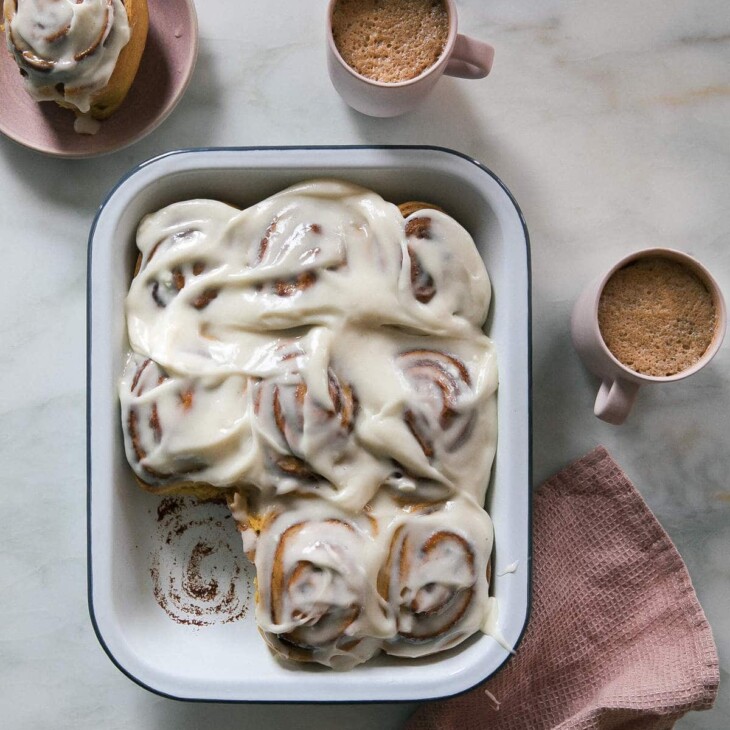 Pumpkin Cinnamon Rolls with Maple Frosting are the perfect autumnal breakfast treat. A fluffy yeasted dough is rolled up with a cinnamon filling and topped with a cream cheese frosting spiked with maple syrup. Make them ahead by preparing the dough the day before and assembling them on the morning of!

Fall is almost here and I can’t wait. Every year it takes so much self-control to not make pumpkin everything once Labor Day is over. I was waiting until we were in proper fall. No pre-matureness here! It’s time for these Pumpkin Cinnamon Rolls with Maple Frosting to shine!

The Amount of Pumpkin Pie Spice Needs to Be On Point

Too much and it tastes medicinal and just tacky. Too little and you’re like THIS IS BLAND. One of the first recipe tests was a bit bland so we added more. We went for balance so there’s a bit in the dough and some in the filling. The pumpkin pie spice also accentuates the pumpkin flavor.

How to Make Pumpkin Cinnamon Rolls with Maple Frosting

How to Make the Best Filling for Cinnamon Rolls

A lot of cinnamon rolls recipes will have you melt butter and then spread it over the dough. Then you’ll just sprinkle sugar on. Look, this works. I just find it to be super messy and I think it’s MUCH easier to make a paste.

It spreads easier, it won’t leak out of the cinnamon roll. I also read recently that doing this will make some dry cinnamon rolls because the melted butter will absorb into the dough and the center won’t be buttery. I dunno if this is true, I just find this method easier. It does take the foresight to make sure you have a good amount of room temperature butter ready.

If you make these rolls, let me know on Instagram!

Looking for more recipes? Here are some favorites:

To Assemble the Cinnamon Rolls:

To Make the Cream Cheese Icing:

To Make these Ahead of Time:  You are more than welcome to make them ahead a few different ways. The first way is the make the dough/filling/cream cheese frosting and place them all separately in the fridge overnight. The dough will proof slowly in the fridge. You can continue the recipe in the morning, rolling the dough straight from the fridge, cold. This makes it easier to handle and slice. You will need to bring the filling and frosting to room temperature first before using.  Another way is to assemble the cinnamon rolls and instead of setting them out on the counter to proof, transfer them to the fridge to proof overnight. You can bake them straight from the fridge as long as they have doubled in size.