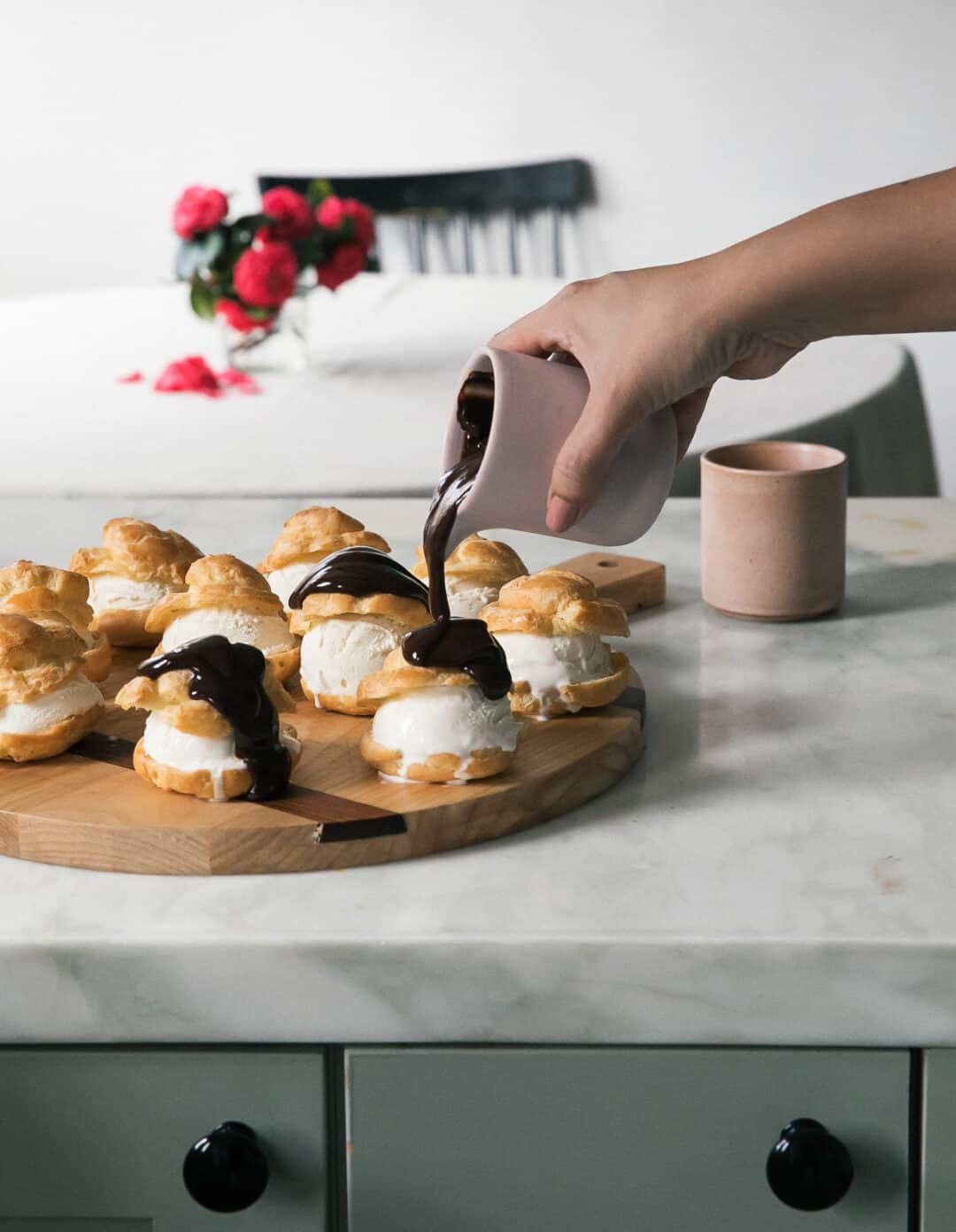 Profiteroles are made from choux pastry and are piped out and baked until they’re tall and fluffy! I like to slice them in half, add a scoop of ice cream to the center and drizzle them with warm ganache! Yum. 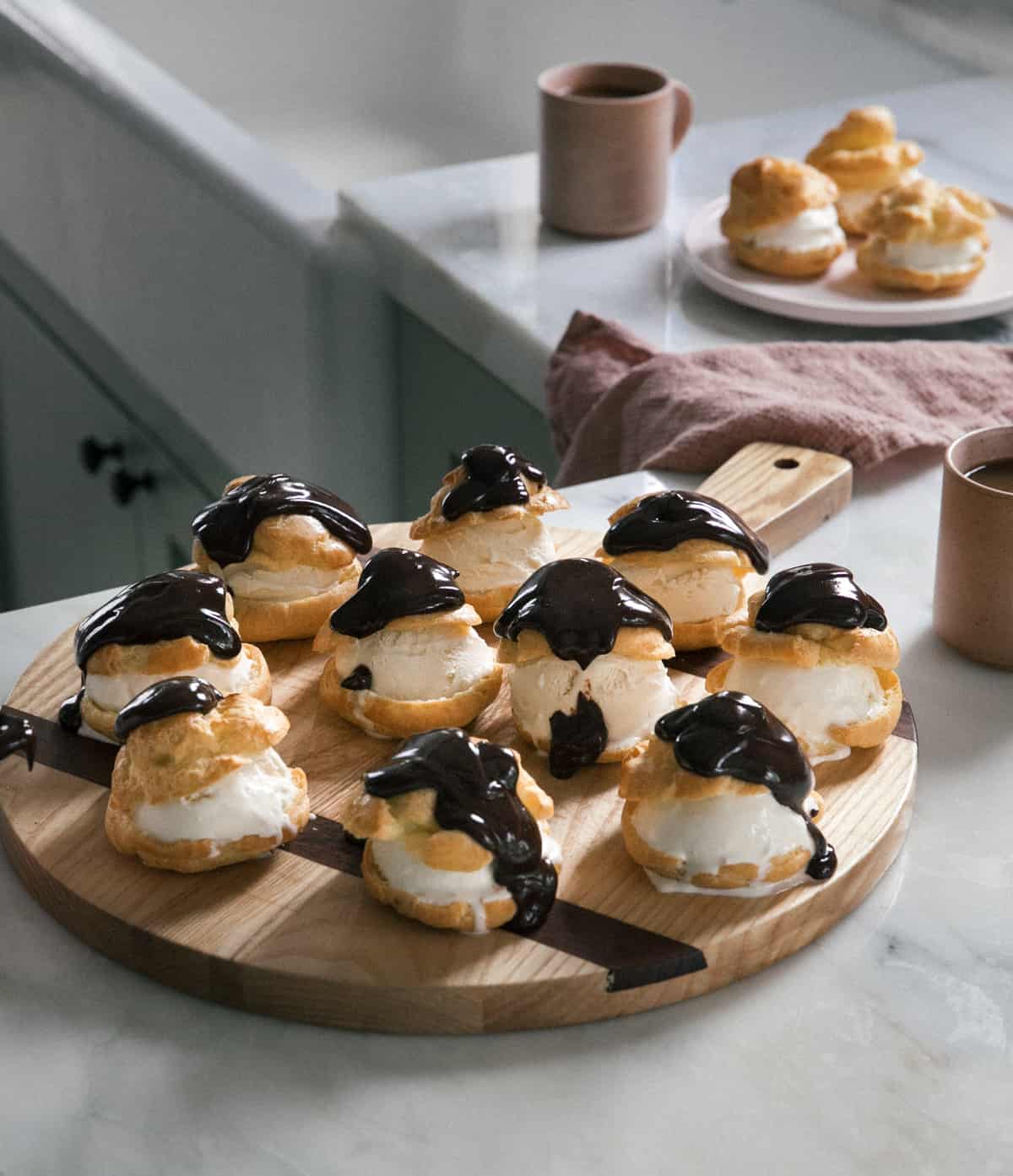 Let’s make some Profiteroles! Have you ever made one? What is the difference between a Profiteroles vs. Cream Puffs.

Well, they’re pretty similar. They’re made from a choux pastry. Very French! Choux pastry is a gateway to so many magical things. For instance, once you get this down you can make Profiteroles (see above), eclairs and all sorts of other pastries.

You see, when you open them up there’ll be a gigantic, gaping whole. It’s meant for you to fill it with all sorts of custards, cremes, or in this case, ice cream.

Amazing. And surprisingly not too, too difficult. 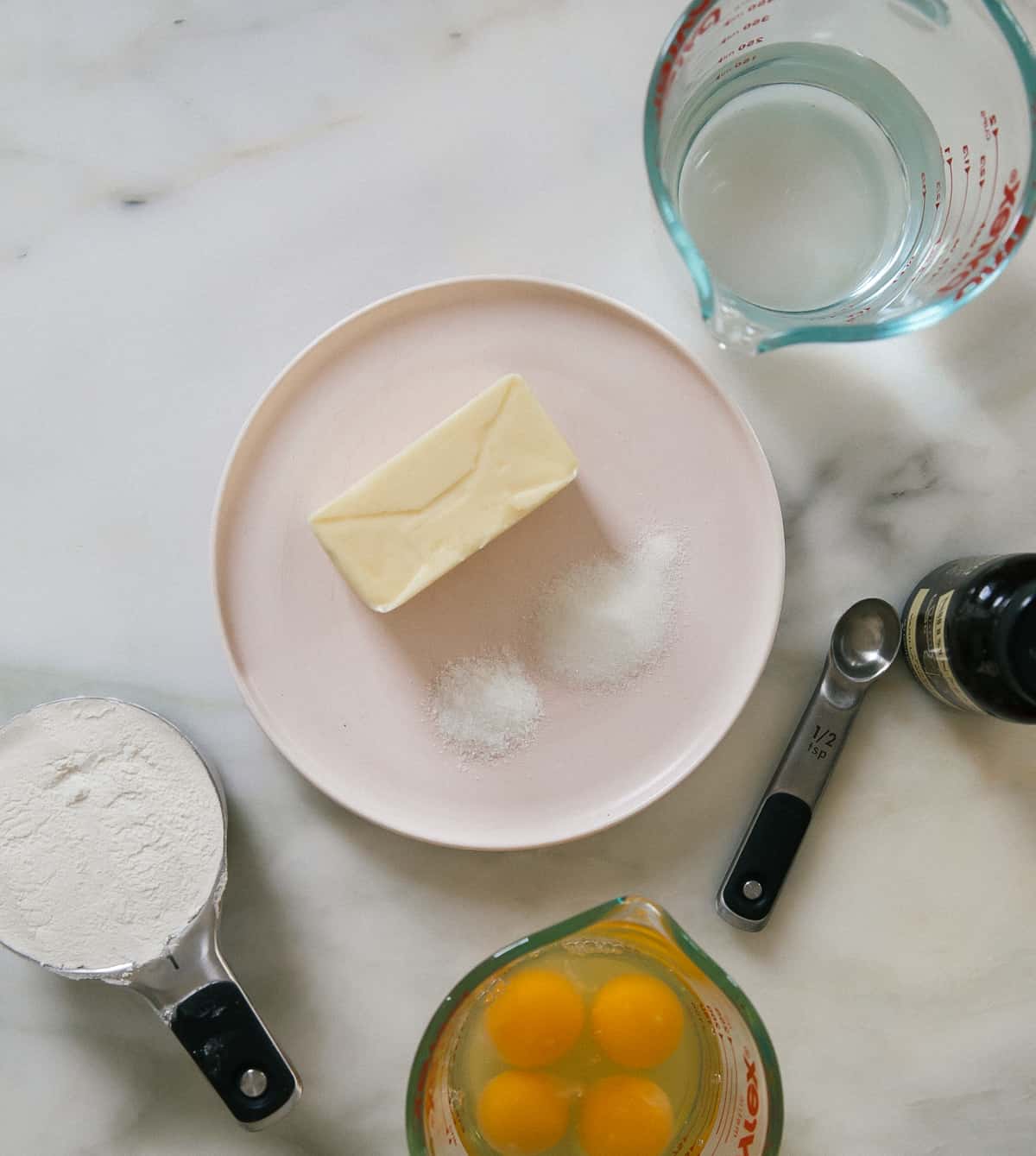 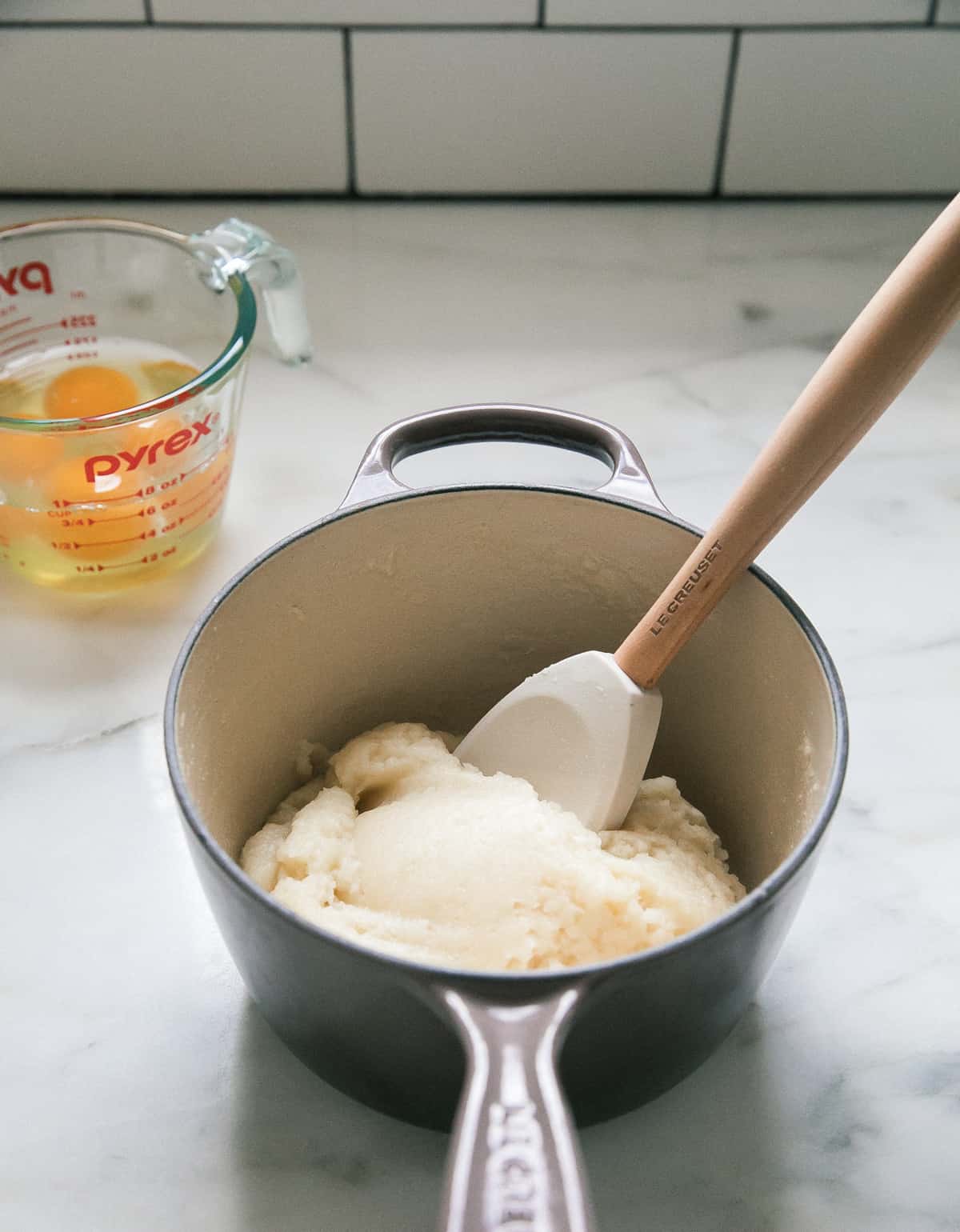 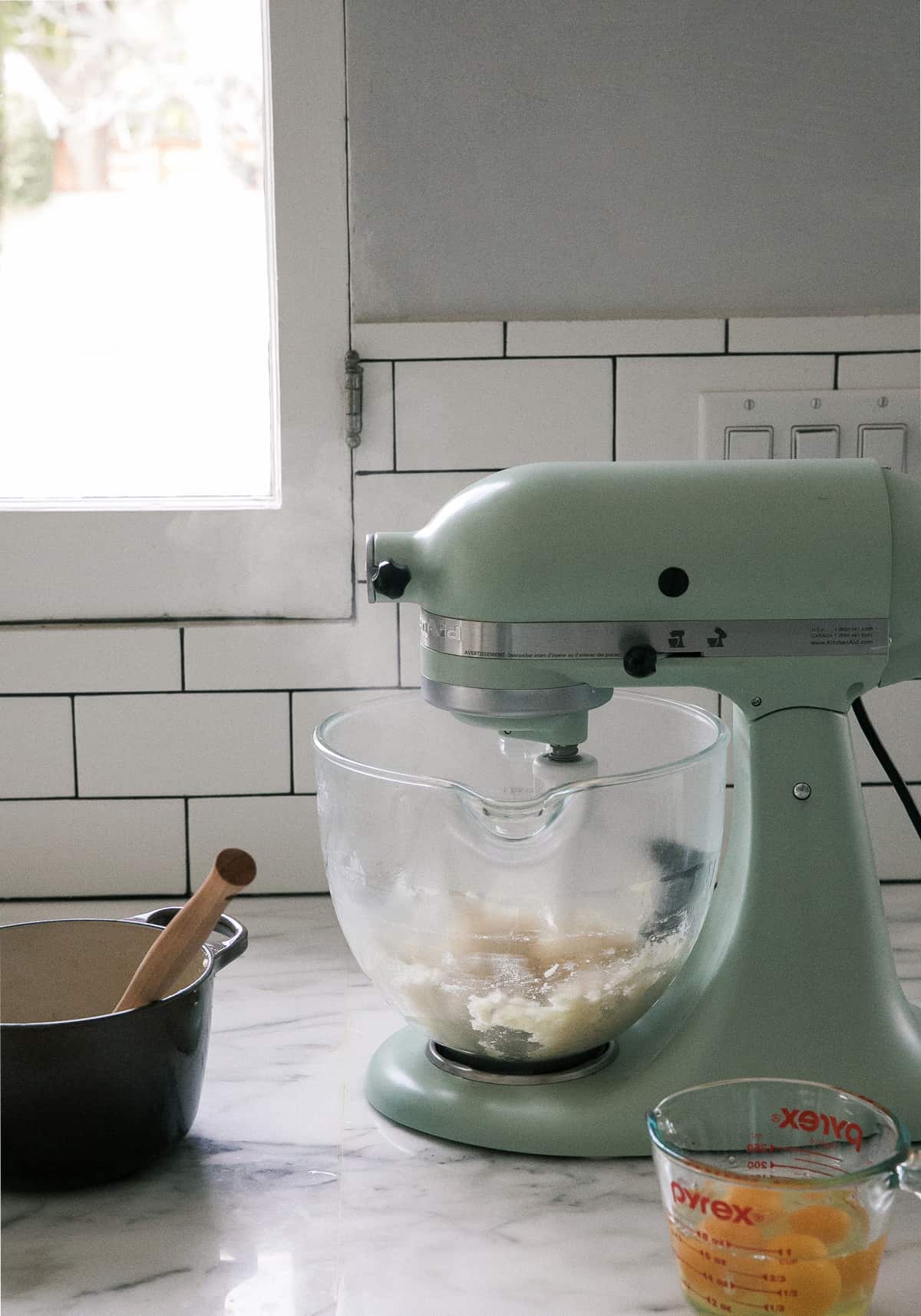 How to Make Profiteroles 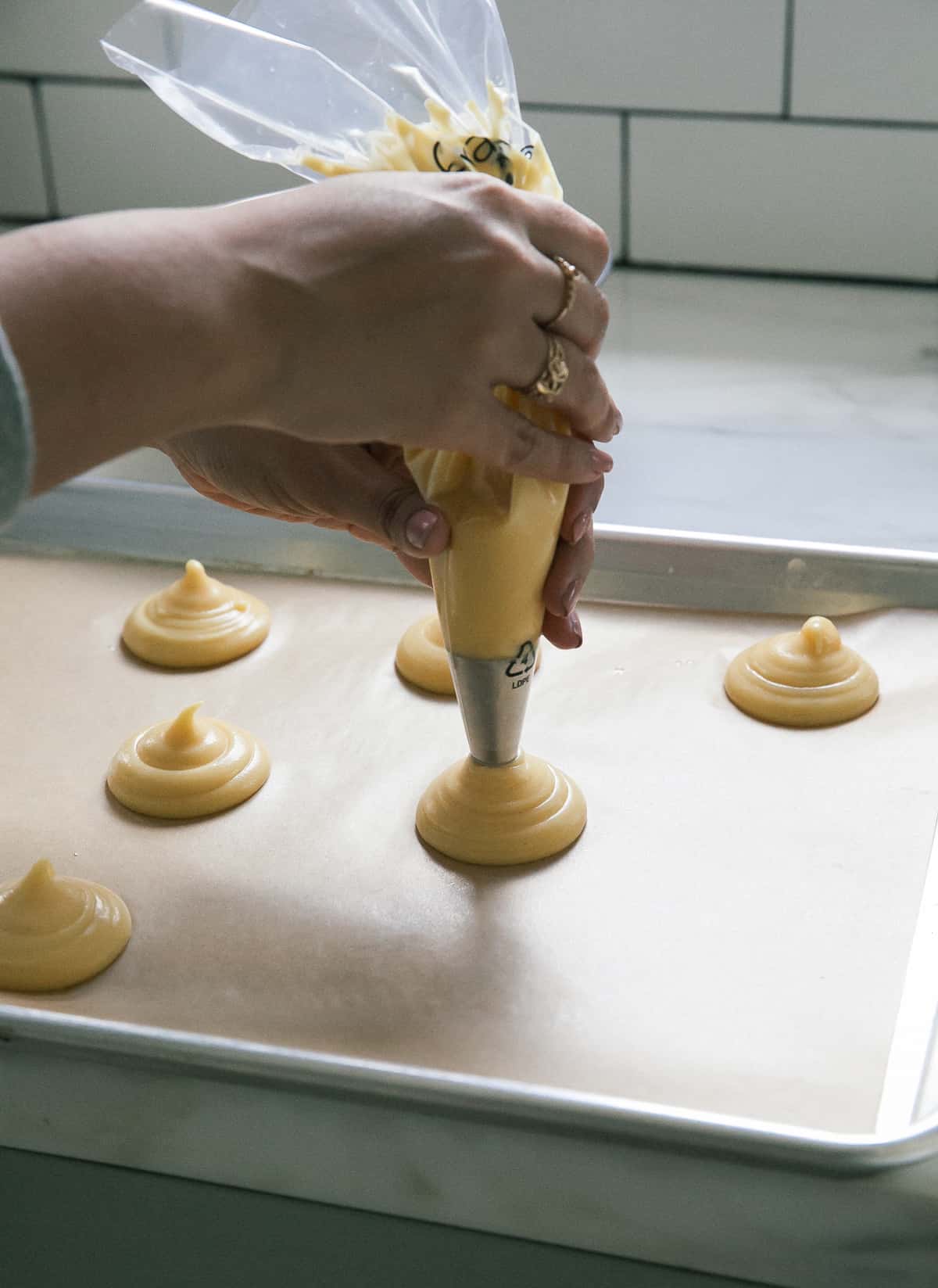 What Makes a Profiterole Light and Tall 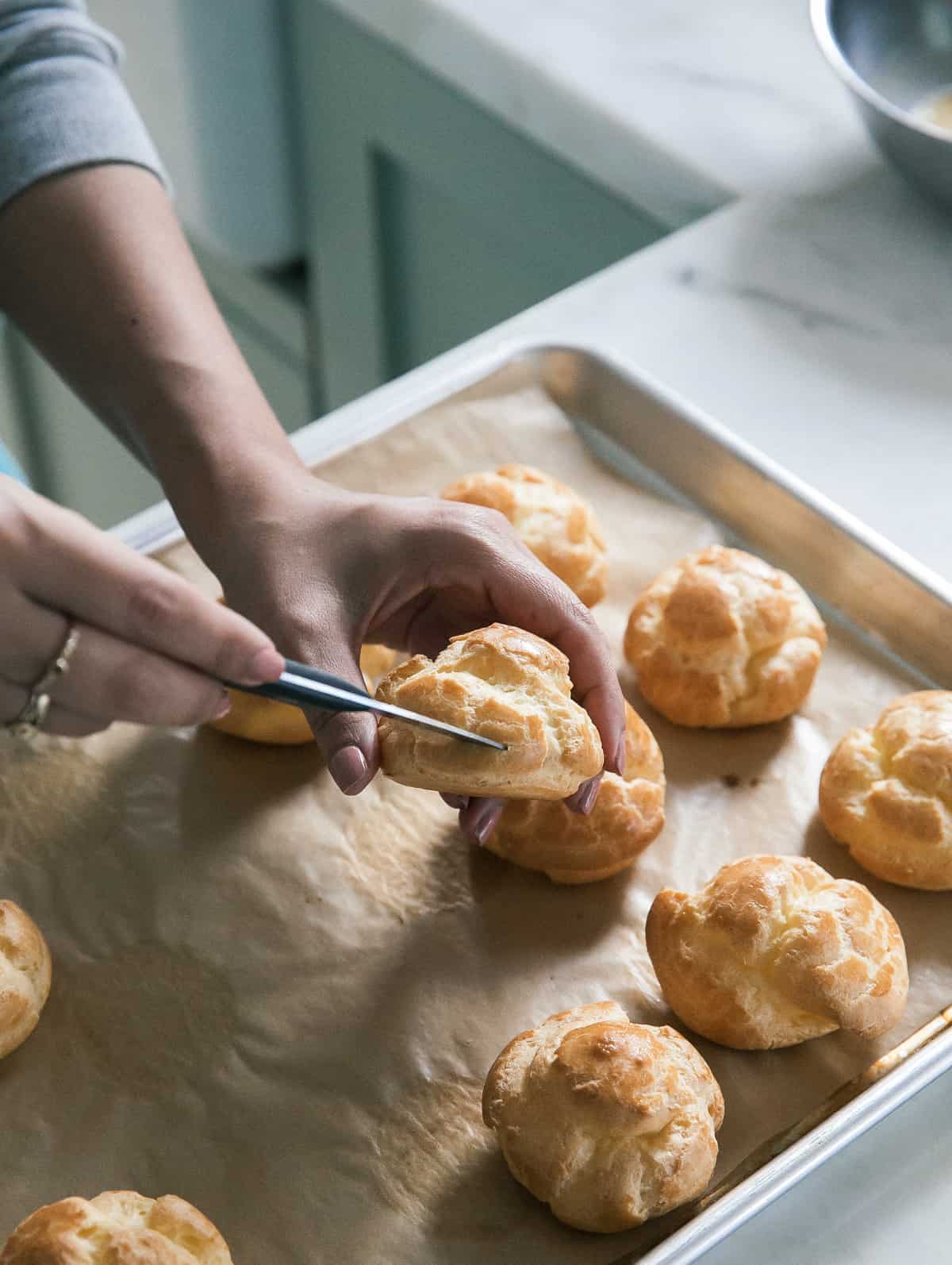 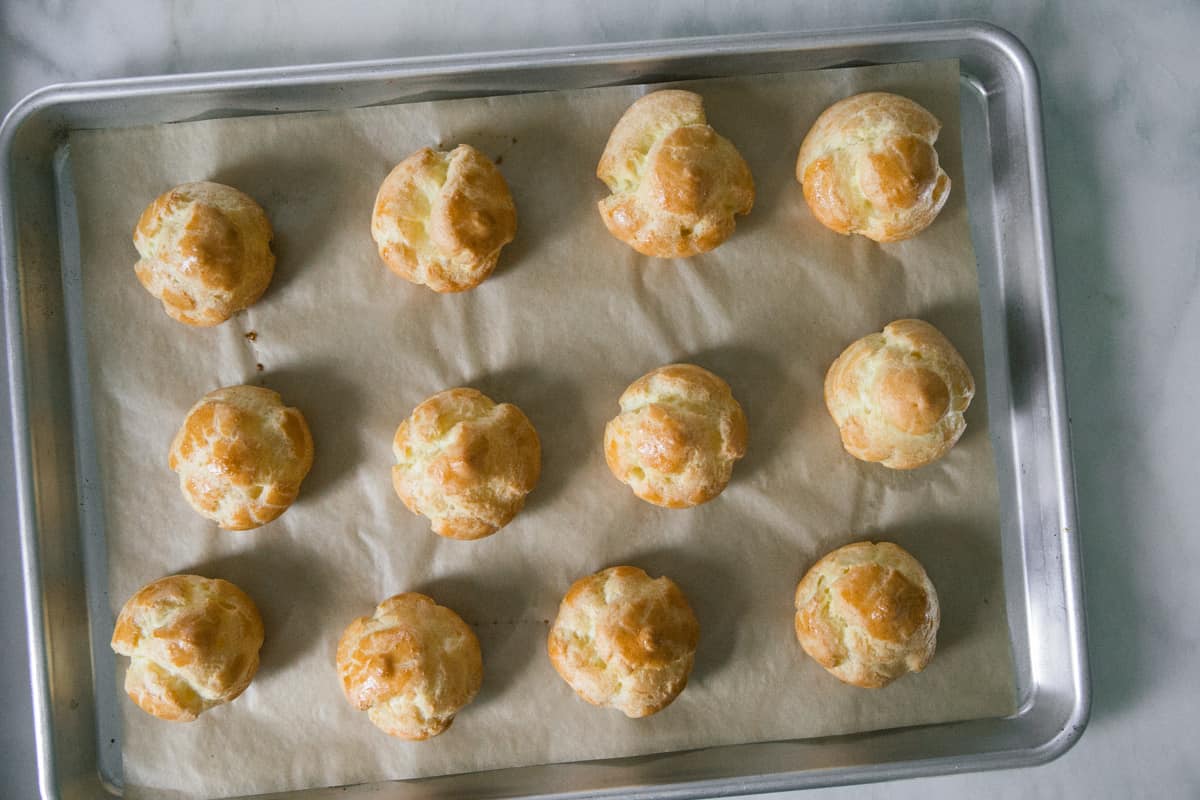 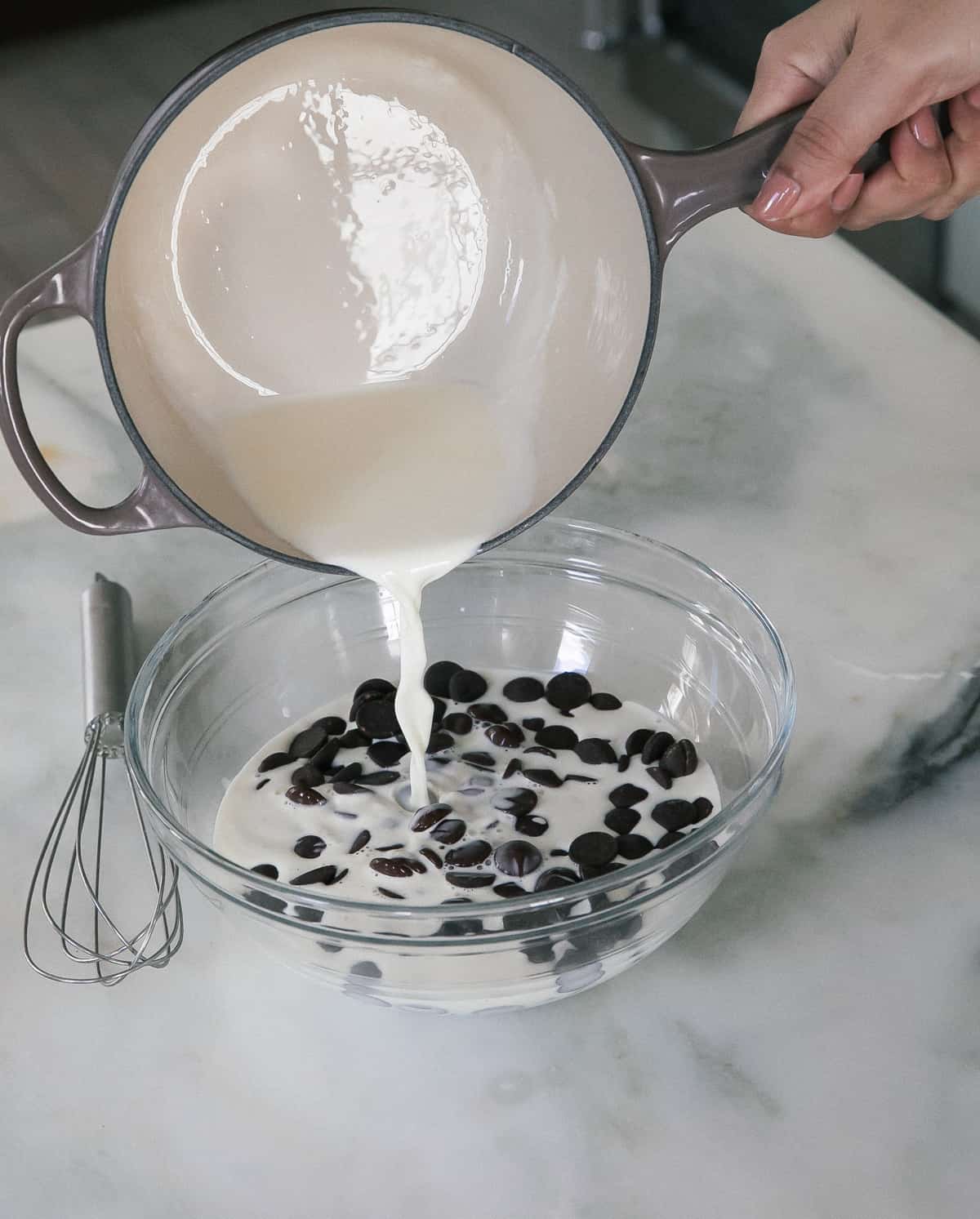 What to Serve with Profiteroles

Most often times, people stuff these with fluffy whipped cream. I like to place a scoop of ice in a profiterol and then top them with chocolate sauce. YUM! The warm and cold combination is delightful.

I’ve also seen people make a cake with these, and ummm, that’s a GREAT IDEA. 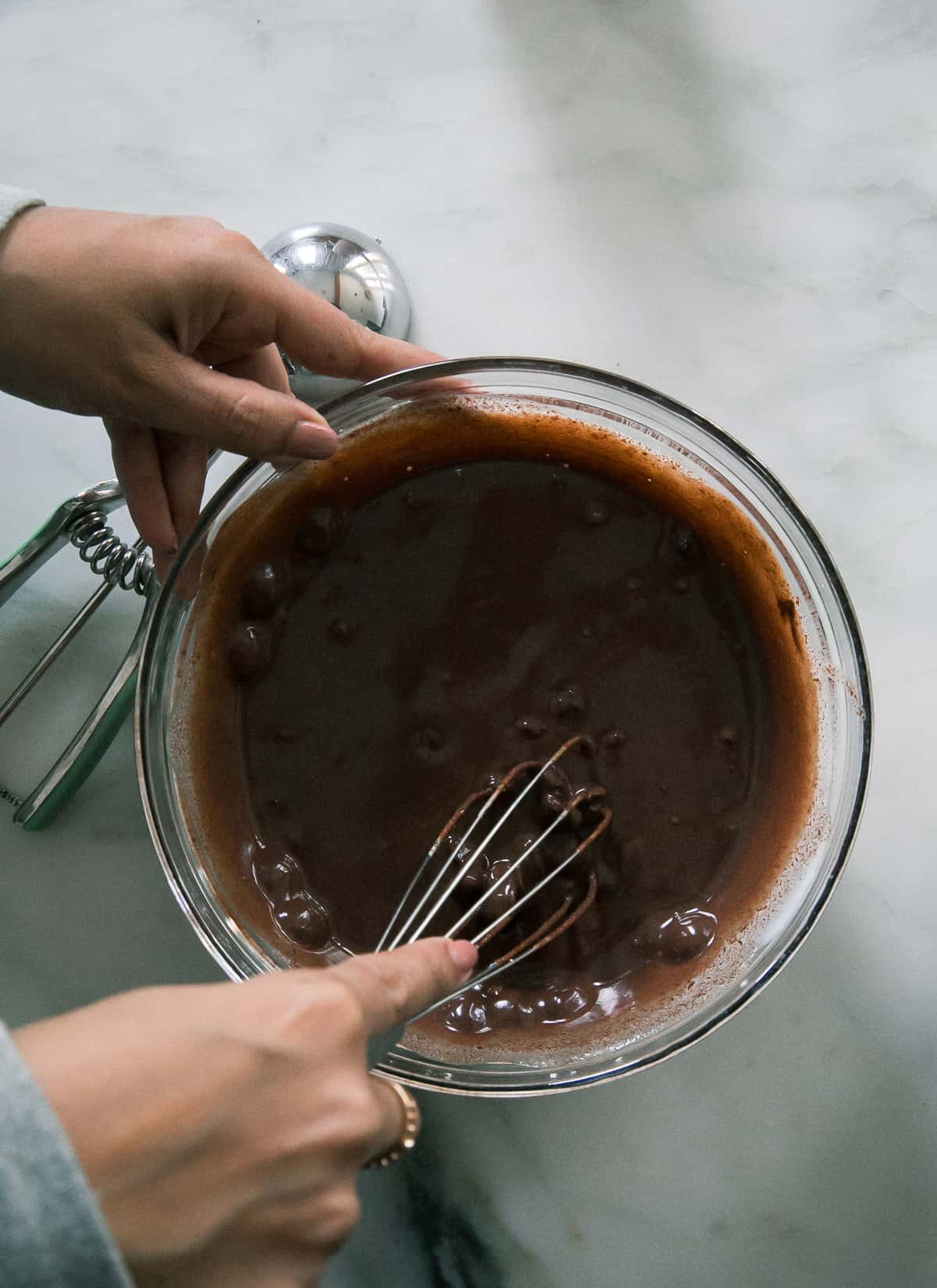 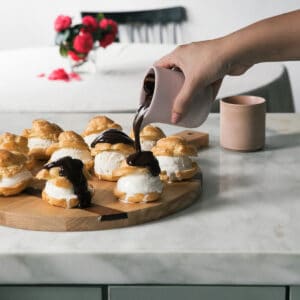 PRINT
5 from 8 votes
Prep Time: 15 minutes
Cook Time: 35 minutes
Cooling Time 10 minutes
Total Time: 1 hour
Serving Size: 18
Calories: 340kcal
Author: Adrianna Adarme
Profiteroles are made from choux pastry and are piped out and baked until they're tall and fluffy! I like to slice them in half, add a scoop of ice cream to the center and drizzle them with warm ganache! Yum.

To Make the Pâte à Choux: 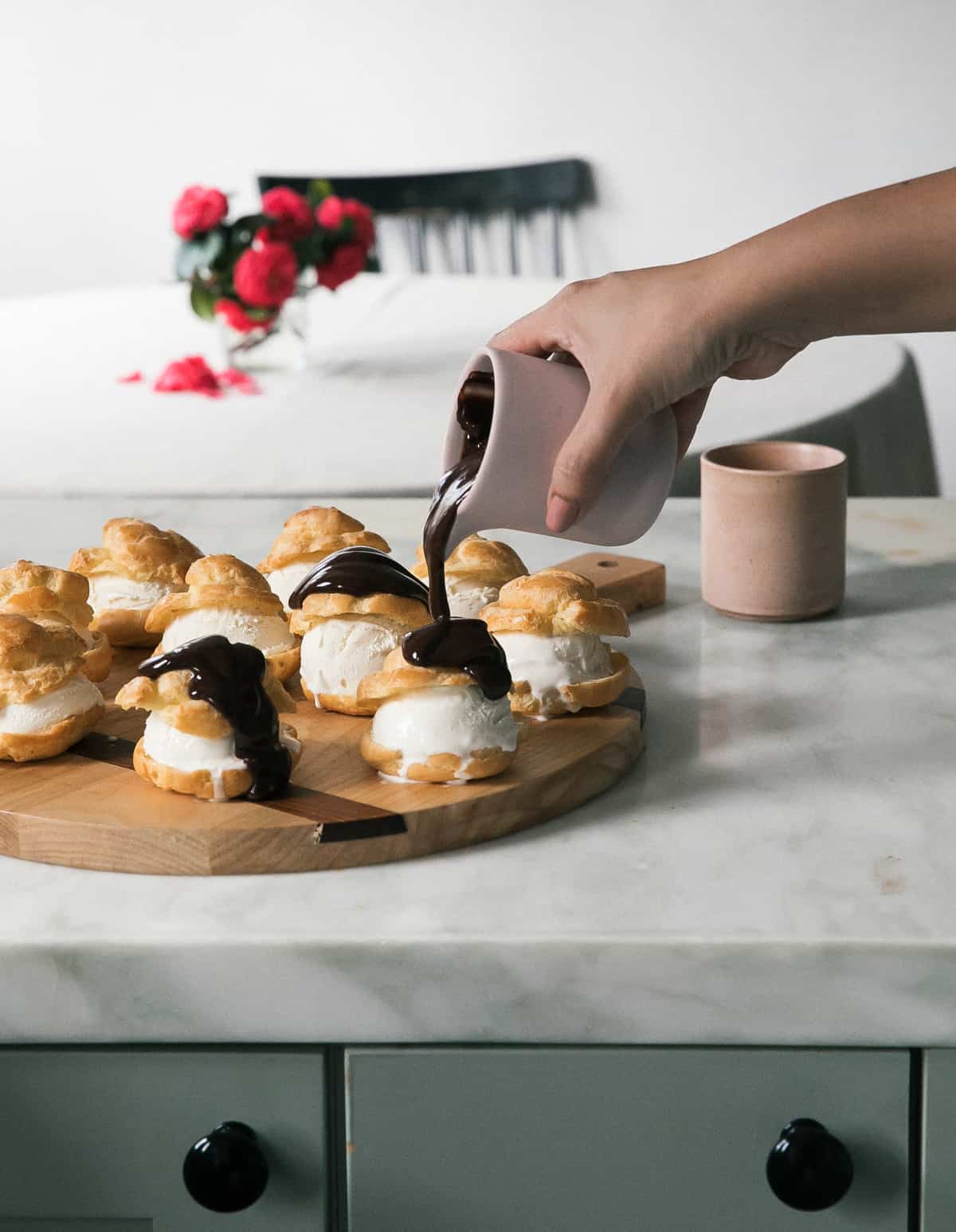 If you make these Profiteroles, let me know on Instagram!

Looking for more chocolate dessert recipes? Here are some favorites: 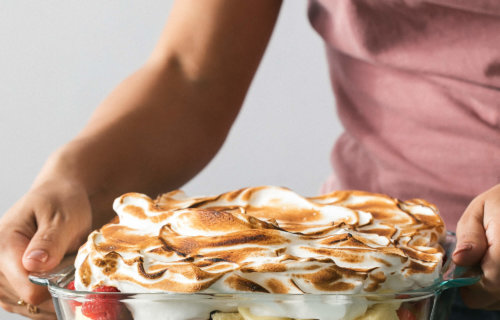 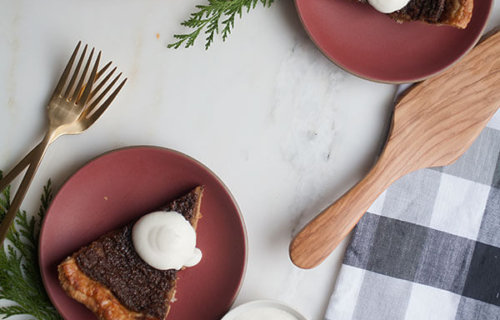