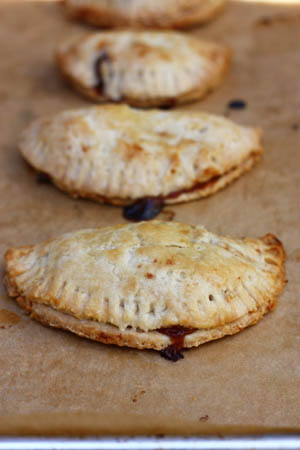 I have a friend. His name is Ryan (see the gentleman below with the good form) and he hates cake. But looooves pie. So when he invited me to his birthday party, which promised three-legged races, sack in the hole and an egg and wooden spoon race, I figured it’d be nice to bake him a pie.

And since I spent the whole summer dreaming about some variety of Hand Pies, I thought this was the perfect opportunity. Hand Pies are basically the cuter, smaller version of bigger pies. They’re portable and perfect for things like fall picnics in the park…or eating in bed with one hand while typing with the other. Whatever. 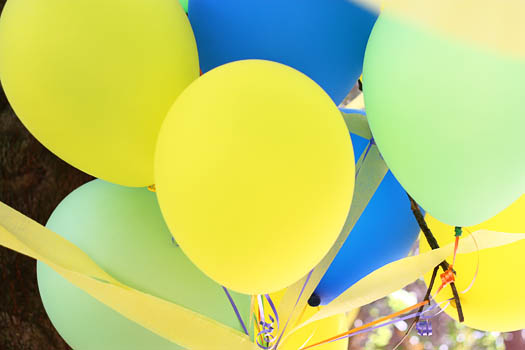 Oh can we talk about something? It’s been bugging me for awhile…it’s about pie…

“Easy as pie” is probably the dumbest and most inaccurate idiom that exists. Because anyone that’s made a pie knows it’s the farthest thing from easy.

Eating it is totally easy, making it…not so much.

The thing that makes pie a little tough is the crust. That’s where the main source of stress comes from. Mainly because pie dough has a total attitude. It can be uncooperative, unpredictable and fickle. 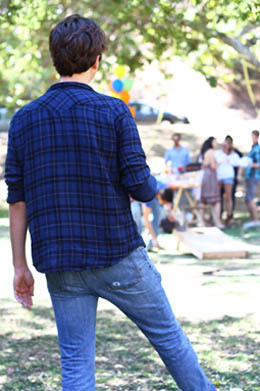 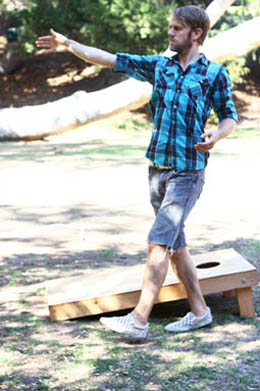 Remember last season on Top Chef when all of those amazing chefs were scrabbling and all stressed out over pie? Yeah, that was me Saturday morning. I was sweating, covered in flour, cinnamon and nutmeg, hoping and crossing my fingers that these Apple Hand Pies worked out…or else I would’ve had to revert to my plan b: go to this place, buy one and attempt to pass it off as my own. Awkward.

Luckily they worked out. And I learned the only thing that can make a pie work is patience, care, a whole lot of hope and a few good tips…and I have them! 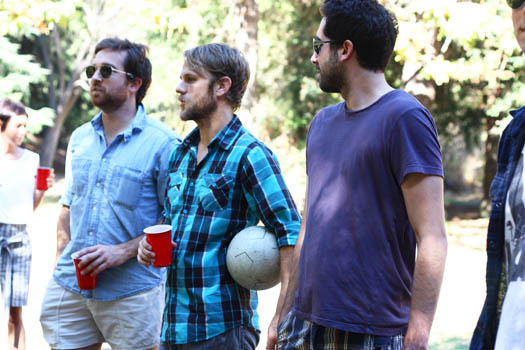 Okay, this is when the pictures of how to make the crust are supposed to come in…but I don’t have ’em. BUT if you hop over to Joy the Baker, she has some step-by-step photos, which are super helpful.

After a whole lot of research, I settled on her Buttermilk Pie Crust. I highly recommend it. It was super tender and flakey and it didn’t use shortening! I also made it the night before which made my life a whole lot easier. It took me about 20 minutes from start to finish. Amazing. 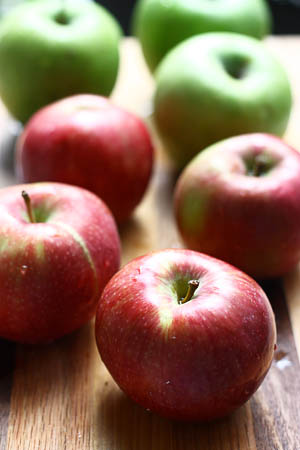 I used a mix of McIntosh and Granny Smith. Pretty straightforward, right? I peeled them, cut them in half, cut out the core (since I don’t own a corer) and diced them up. I’d actually recommend dicing them as small as you can get them (I’ll explain later). 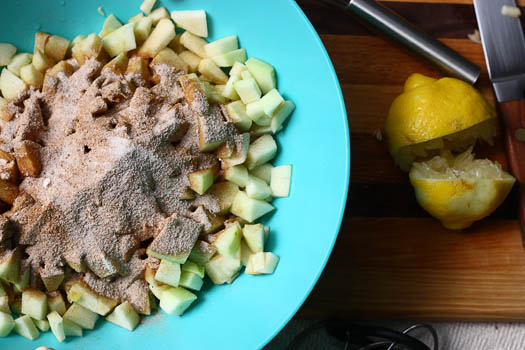 Then I took out my first wrapped pie dough out of the fridge. I let it sit for 2-3 minutes on the counter to warm up a bit. It was easier to roll out. It was still kinda crumbly so I kneaded it a bit to distribute the moisture.

I rolled it out to about 1/6-inch thickness and cut out 5-inch circles using the cup from my juicer machine. If you have a biscuit cutter that size, then you’re officially more awesome than me.

After I cut them out, I put ’em on a baking sheet lined with parchment and stuck them back in the fridge for 15 minutes. If you peek back in the fridge and you see little bits of butter in the dough then just close it and pat yourself on the back. That means the dough is gonna be awesome. 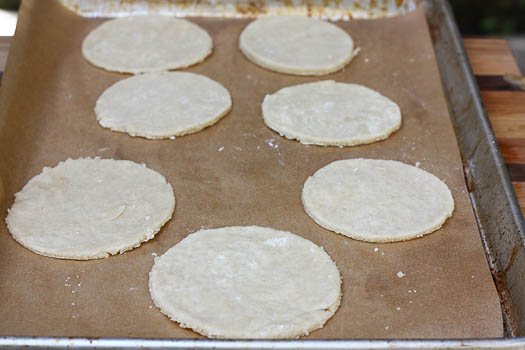 I took them out and let them sit for 2 minutes so they’d be easier to fold. If they’re too cold, they’ll just crack when you try to fold them.

Two things that I had on hand that are not pictured: a ramekin of water and a ramekin of egg wash. Both things will be needed. Oh and a fork! You’ll need a fork.

I took a small spoonful of the diced apples and put them on one side of the dough. I stuck my finger in the ramekin of water and ran it all along the edge of the dough. This is gonna seal the two halves together. (If you look closely you can see a bit of moisture along its edge. Good eye.) 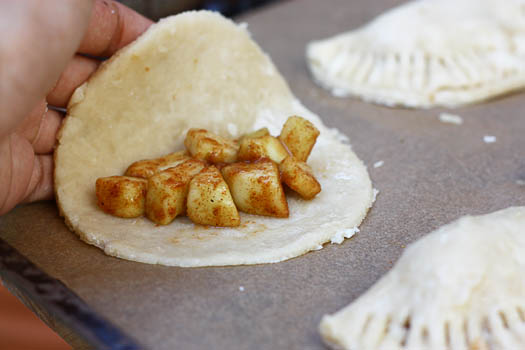 Then fold it down and press them together using a fork. If I didn’t have to simultaneously take pictures, I swear they would’ve been a little neater…maybe. I’m not blaming you or anything…

You’re gonna then brush them with some egg wash, make a slit in the top and then stick them back in the fridge for another 15 minutes. 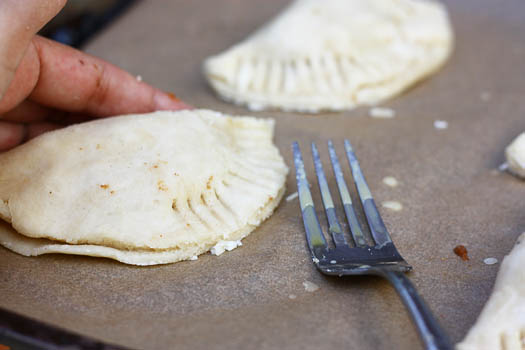 When they’re nice and cold, you’ll then transfer them to a piping hot oven for 20-30 minutes, or until beautiful and brown… 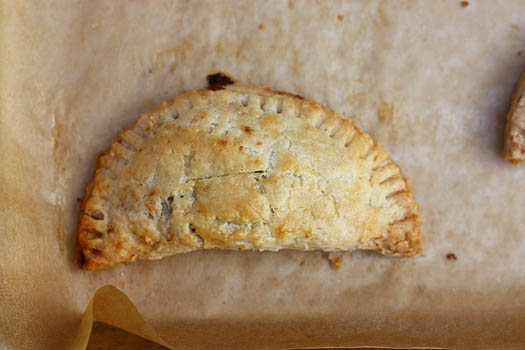 Sift together the flour, sugar and salt in a large bowl. Take the cold butter from the freezer and toss it with the flour mixture.

Dump the cold butter cubes and flour mixture onto a large work area for rolling. With a rolling pin, roll the mixture, flattening the butter cubes with the flour into long, thin, floured butter sheets. Work quickly to ensure that the butter stays cold. Below is what the rolled butter and flour look like after I’ve gathered them together on the work surface a bit.

Place the flour and flattened butter back in the large bowl and chill for 10 minutes. When the butter is cold, remove the bowl from the refrigerator, make a small well in the center of the flour and butter mixture. Add the cold buttermilk to the bowl all at once. Begin to bring the dough together with one hand (keep the other hand free to answer the phone).

Moisten all of the flour with the milk, using your hand to break up large clumps of milk and flour. The dough will be rather shaggy, but you can add another tablespoon of buttermilk, if you see that all your flour isn’t moistened. Form the dough into two disks. The disks will be rough, and hard to shape together, but once they rest in the fridge for an hour, they’ll be easier to roll out.

Peel, core and cut apples in half, and dice. You want the dice to be rather small. It’ll make it easier to fill your hand pies. Then toss the diced apples with the lemon juice and zest. In a small bowl, mix sugar, flour, salt and spices together and toss with the diced apples. Set aside.

Okay, now…remove one half of your pie dough from the refrigerator and let it sit on the counter for 2-3 minutes. Roll the dough out to a 1/6-inch thickness. Grab a 5-inch biscuit cutter (I used the cup from my juicer machine) and cut out as many circles as possible. I had to re-roll the dough a few times to use it all up. Place your dough circles out onto a baking sheet lined with parchment paper. Return the baking sheet to the refrigerator for 15-20 minutes. Take out your second pie dough half from the refrigerator and repeat the steps above. You should end up with 13-15 dough circles.

Grab a ramekin of water, ramekin of egg wash and the bowl of the apple pie filling. Remove the first baking sheet of dough circles from the fridge. You might want to let the dough sit for a 1-2 minutes so they’re a bit more pliable. If the dough is too cold, then it’ll break and crack when you try and fold it over.

Take a tablespoon of the apple pie filling and place it on one half of your dough circle. Brush the bottom edge with a small amount of water and fold over the top half so it’s now a half moon shape. Take a fork and press the edges to bind them together. Brush with egg wash and make a slit on the top. Repeat over and over until you’ve assembled all of your hand pies. Place them back onto the parchment lined baking sheet and put them back in the fridge for another 15-20 minutes to chill.

At this time, pre-heat the oven 375 degrees. When the hand pies are done chilling, remove from the refrigerator and place in the piping hot oven for 20-30 minutes, or until golden brown.

You’ll know when they’re just about done because your house will be engulfed with the most amazing smell of spices and apples!

Place them on a cooling rack…or eat warm like I did! 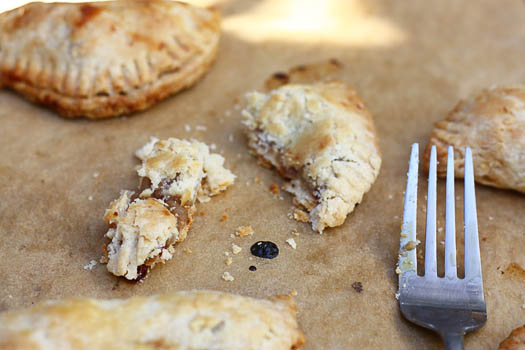