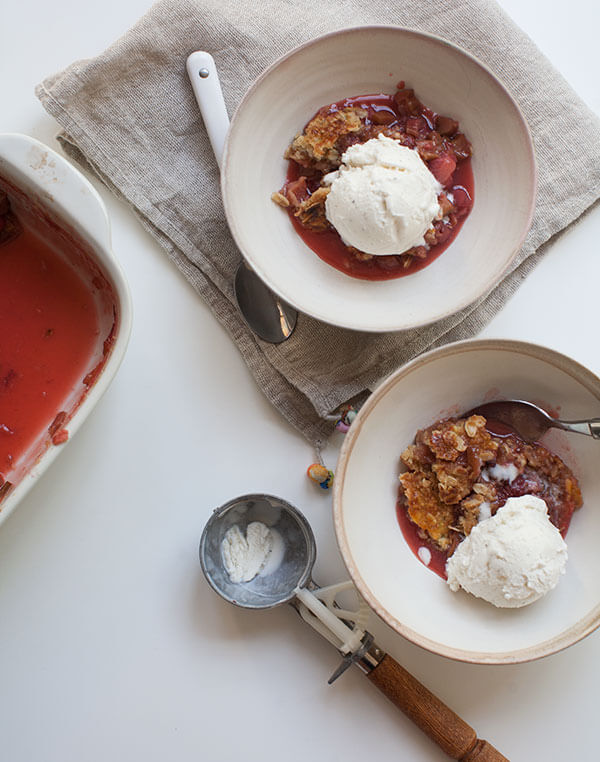 When I was a kid, my mom was big on dishes and meals that utilized an assembly line. For instance, taco night, huge assembly line situation. Beef in one big bowl, toppings like lettuce, guacamole, cheese and tomatoes all in an array of small bowls. My mom didn’t stop at cooking; she was huge on creating assembly lines with the laundry too. She believed in making us pitch in…at least a little. Surprisingly my brother and I hardly ever complained. I think it’s because she always did it in a way that made it seem like a game, it seemed fun.

Today I share with you the third part of my series with Wolf and their initiative to #reclaimthekitchen. As I mentioned in my last post within this series, reclaiming your kitchen can mean cooking simple meals, setting aside time to cook more often, and taking the time to cook with friends and family. This includes getting them to be involved; it’s so much more fun that way anyway and is a great way to share tips and tricks in the kitchen. To see other recipes that would be a good fit for any sort of assembly line situation, check out the Wolf’s Reclaim the Kitchen website. 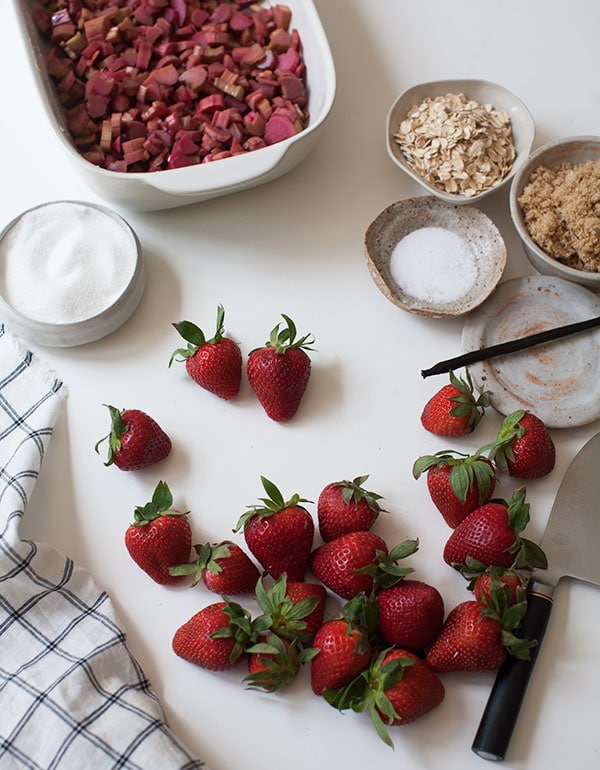 This rhubarb crisp is a good recipe, too, since it has a few super easy components. There’s enough work for everyone! Just kidding, but seriously, everyone could have their own separate little job so they feel useful and like they’re contributing.

The first step is hulling the strawberries and slicing the rhubarb into thin slices. Couldn’t be easier but it does take a bit of time getting through those strawberries. I find prep work is done quickly alongside gossip, music or podcasts. 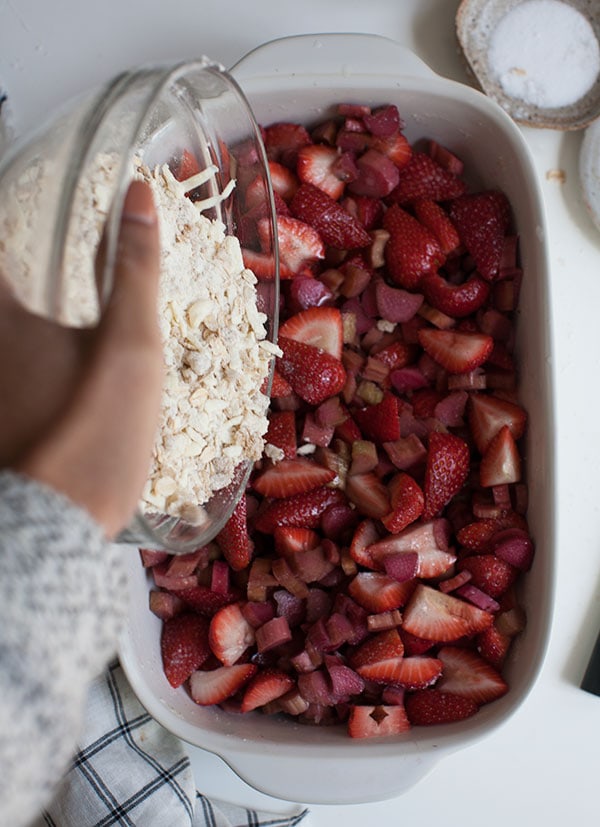 Next, the vanilla bean caviar and sugar are mixed together. This way the vanilla thoroughly incorporates and you won’t be eating a whole big clump of vanilla.

The strawberries and rhubarb are mixed with the vanilla sugar goodness, lemon juice and salt, and left to sit while the topping is made. Yum!

The crumble topping is almost made like pie dough but a million times less difficult. I like to use a box grater to grate the butter into the flour. The rest of the ingredients are added and then it’s dumped on top of the rhubarb and strawberries. 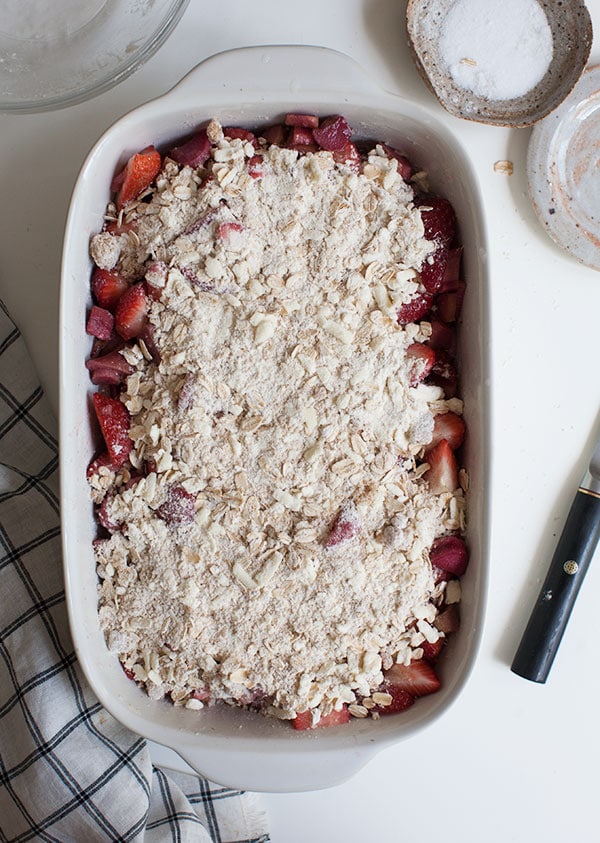 Another person could whisk the egg yolk and milk together to create the egg wash. Egg wash isn’t super common in crisps, but I swear it created the most beautiful color and actually made the top crispy and glorious.

This rhubarb crisp is everything you want from a spring dessert: it’s tart and perfectly sweet and warm (we’re not in summer yet!). I like a bowl of this rhubarb and strawberry crisp warm, straight from the oven. The juice will be flowing (notice there’s no cornstarch) but it’s delicious this way. Plain vanilla ice cream sets it over the edge. 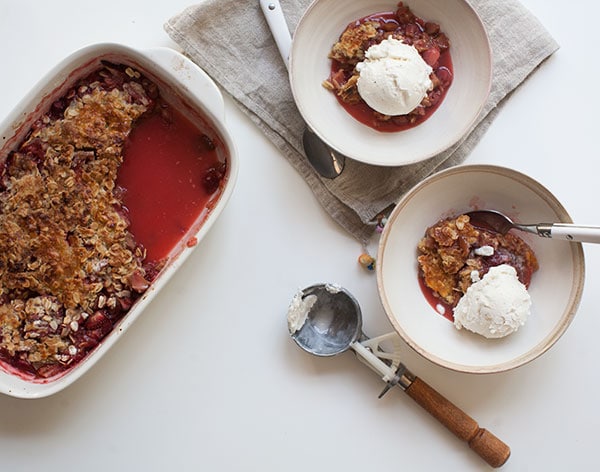 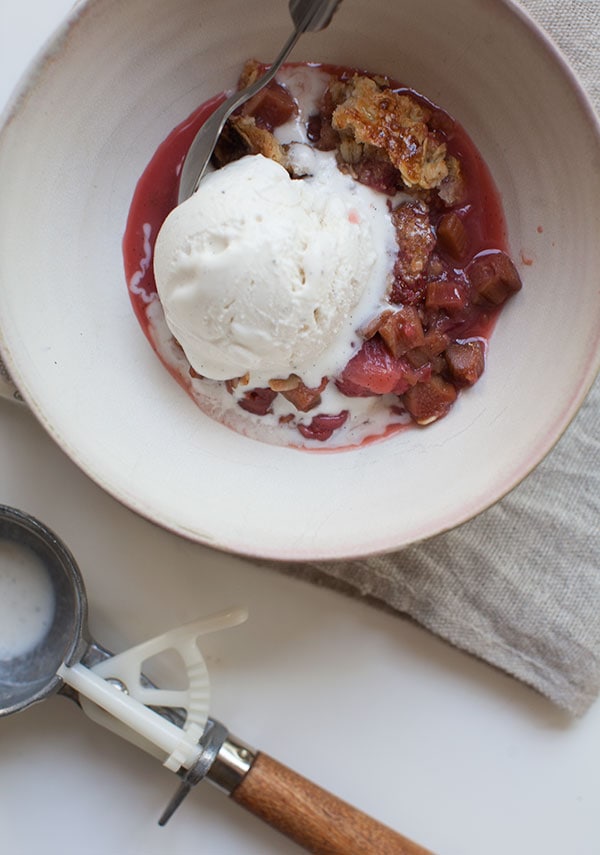 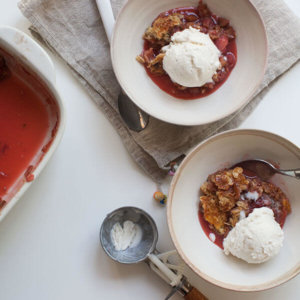 Nutrition Facts
Classic Rhubarb Strawberry Crisp
Amount Per Serving (6 g)
Calories 0
* Percent Daily Values are based on a 2000 calorie diet.
Did you make this recipe?Tag @acozykitchen on Instagram and hashtag it #acozykitchen

(This blog post is part of a paid SocialMoms and Wolf blogging program. The opinions and ideas expressed here are my own.) 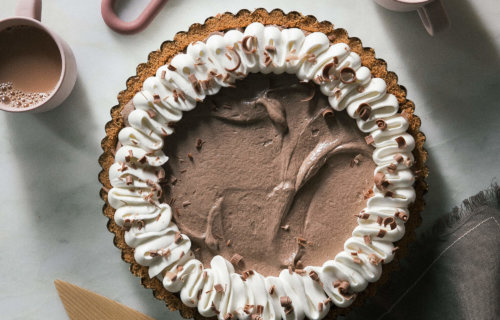 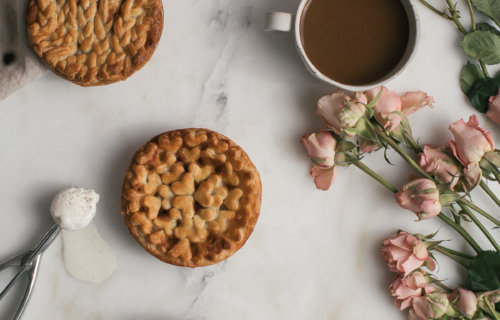 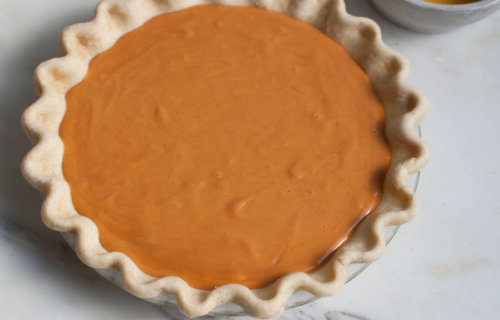