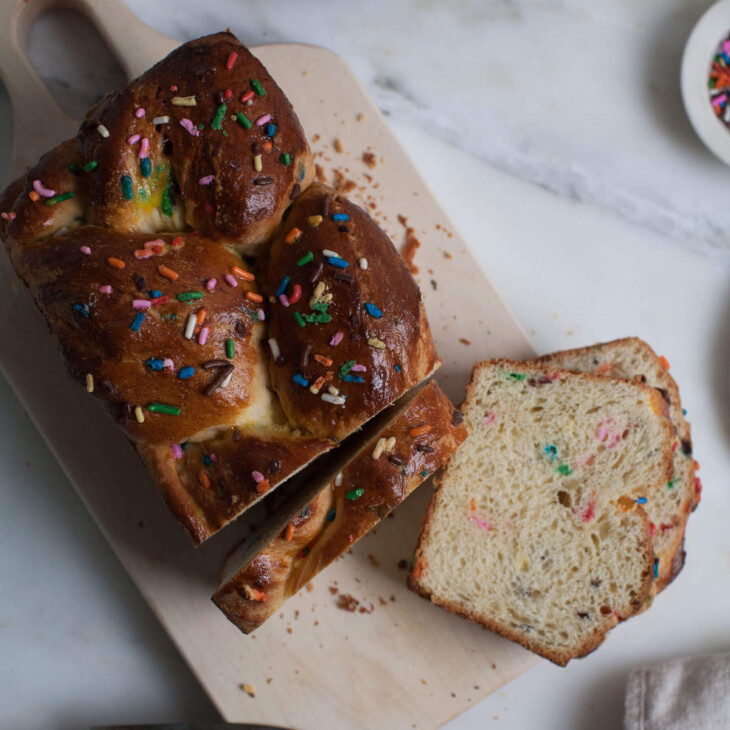 Today we are here to celebrate with Funfetti Brioche Bread!

After a year hiatus, I’ve gotten back into ceramics and I’m making plates! And bowls and all the things. I’m super excited. One of the best parts about ceramics class is that I get to take it with my friend Lara. She’s Australian and I alway ask her questions about Australia. I recently brought up fairy bread and she was like “Oh yeah, for kids’ birthday parties!”

Well, today is the day I take a turn around the earth one more time, so I figured what better way to celebrate than with re-imagined fairy bread. If you’re unfamiliar, fairy bread goes like this: margarine or butter smothered on soft bread…and then topped with sprinkles! That’s it. Couldn’t be simpler and kewt!!

This is different because instead of the sprinkles sprinkled on top, which you could do, the sprinkles are dotted throughout the buttery brioche.

How to Incorporate Sprinkles in a Warm Dough!

Sounds simple…umm…but this took me like a week to figure out. One secret I learned: FREEZE YO SPRINKLES. Back in February, I made funfetti souffles (after my friend, Sam, was like dude funfetti souffles) and the sprinkles were a nightmare in the egg white. They created a big ol’ mess and I sort of just abandoned the project. Now I know the secret thanks to Joshua. (This has been a community effort!) 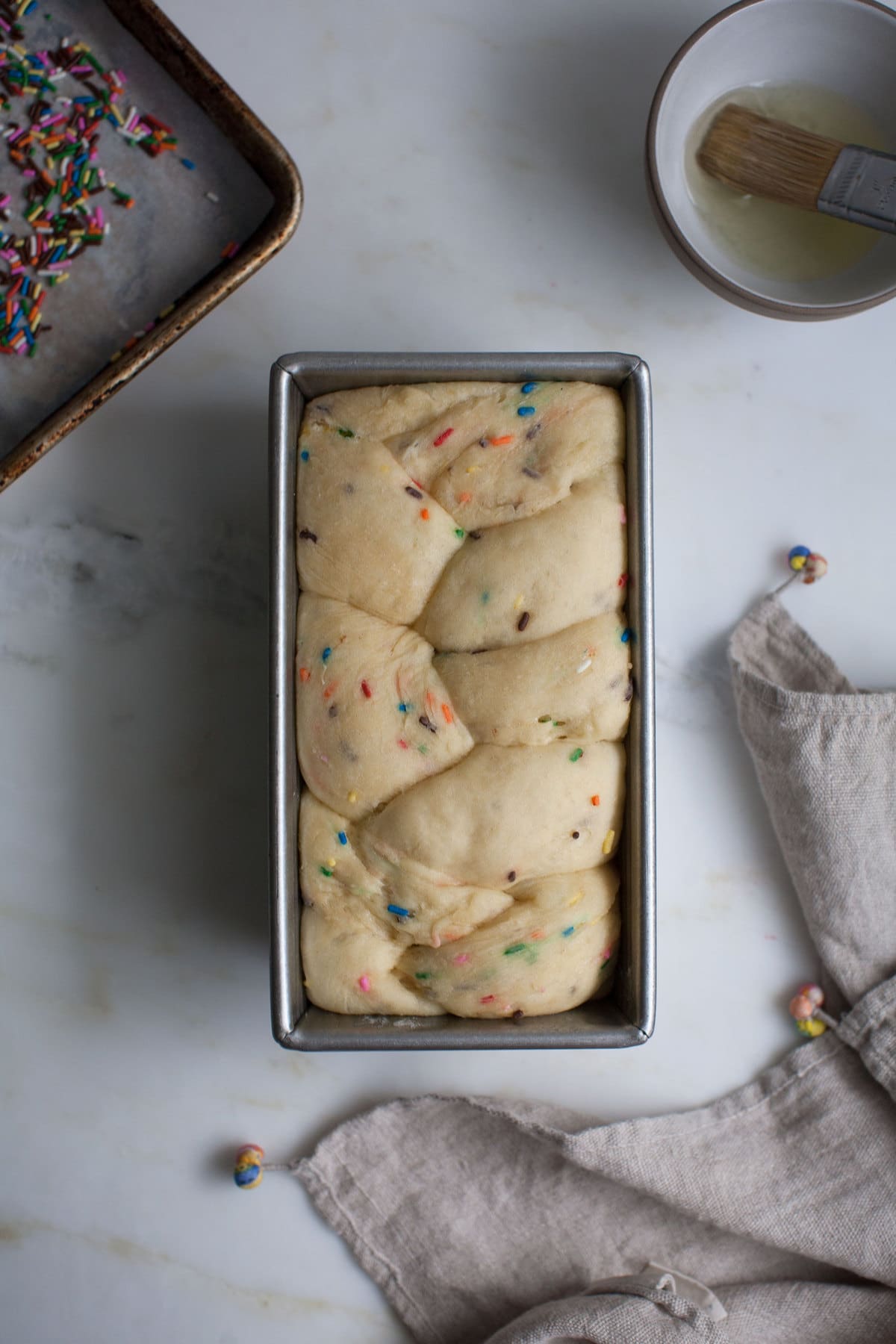 I tried this bread lots of different ways and here is the workflow that works best:

1. Make da dough but stop 5 minutes before it’s totally done kneading. Let it rise for 1 hour. Put it in the fridge overnight to have a slow rise. Freeze da sprinkles.

2. In the morning, put the dough back in the stand-up mixer and knead in the sprinkles in two batches. Braid the brioche. And let it rise again. 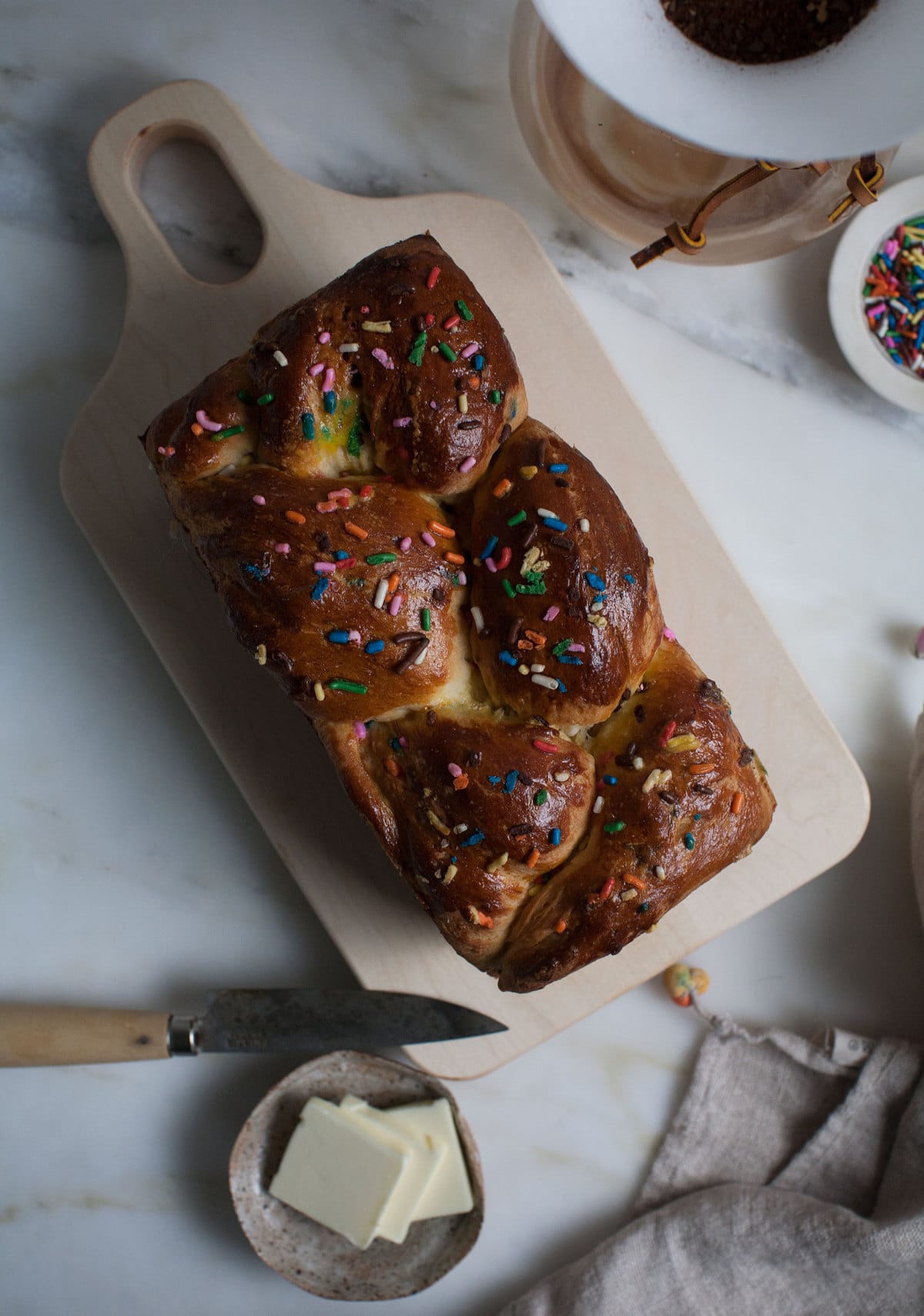 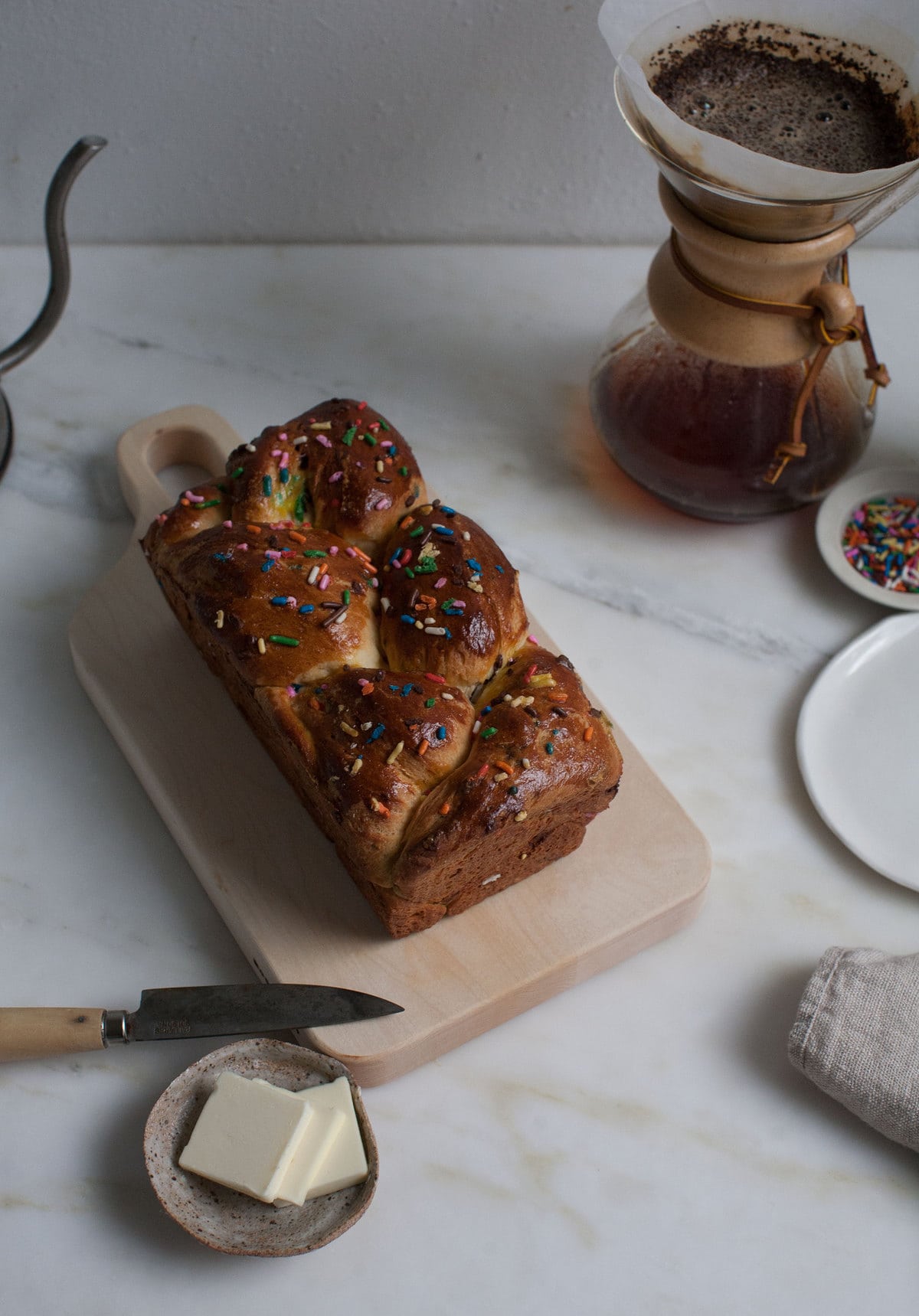 I started with King Arthur’s brioche recipe, figuring that would be my starting point but, man, it’s such a solid recipe so I’ve only really adjusted it to make way for the sprinkles. I also found out that the milk powder is totally optional because I forgot like an idiot to add it a few times when testing this and it was totally fine.

The only thing I didn’t take a picture of was making this as French toast. I mean, c’mon…it’s dying to be used like this. Can you imagine Funfetti Brioche Bread…but French toast? YAS. 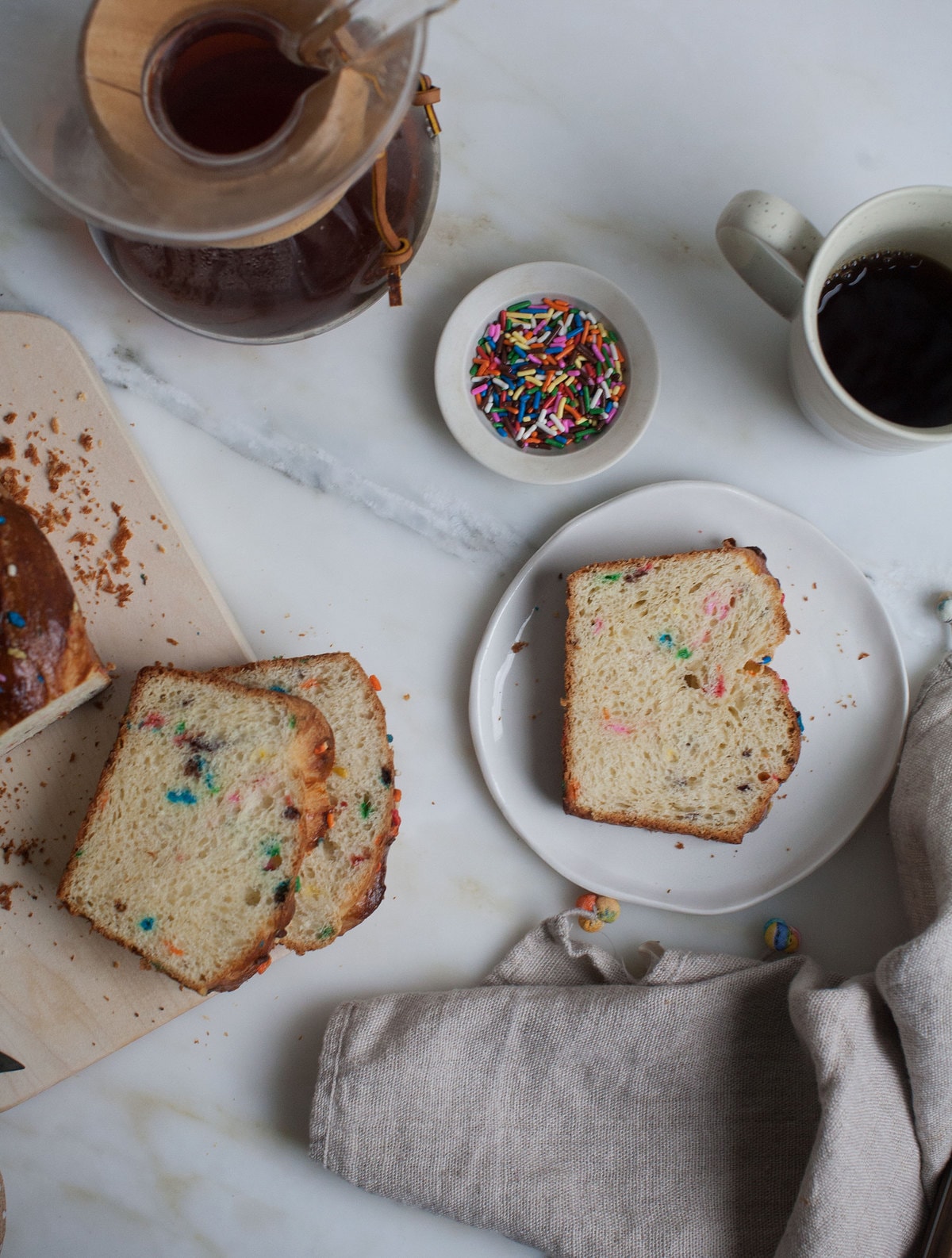 Thanks for all your support this week. I absolutely adore seeing photos of your books on The Instagram and The Twitter #TheYearofCozy. 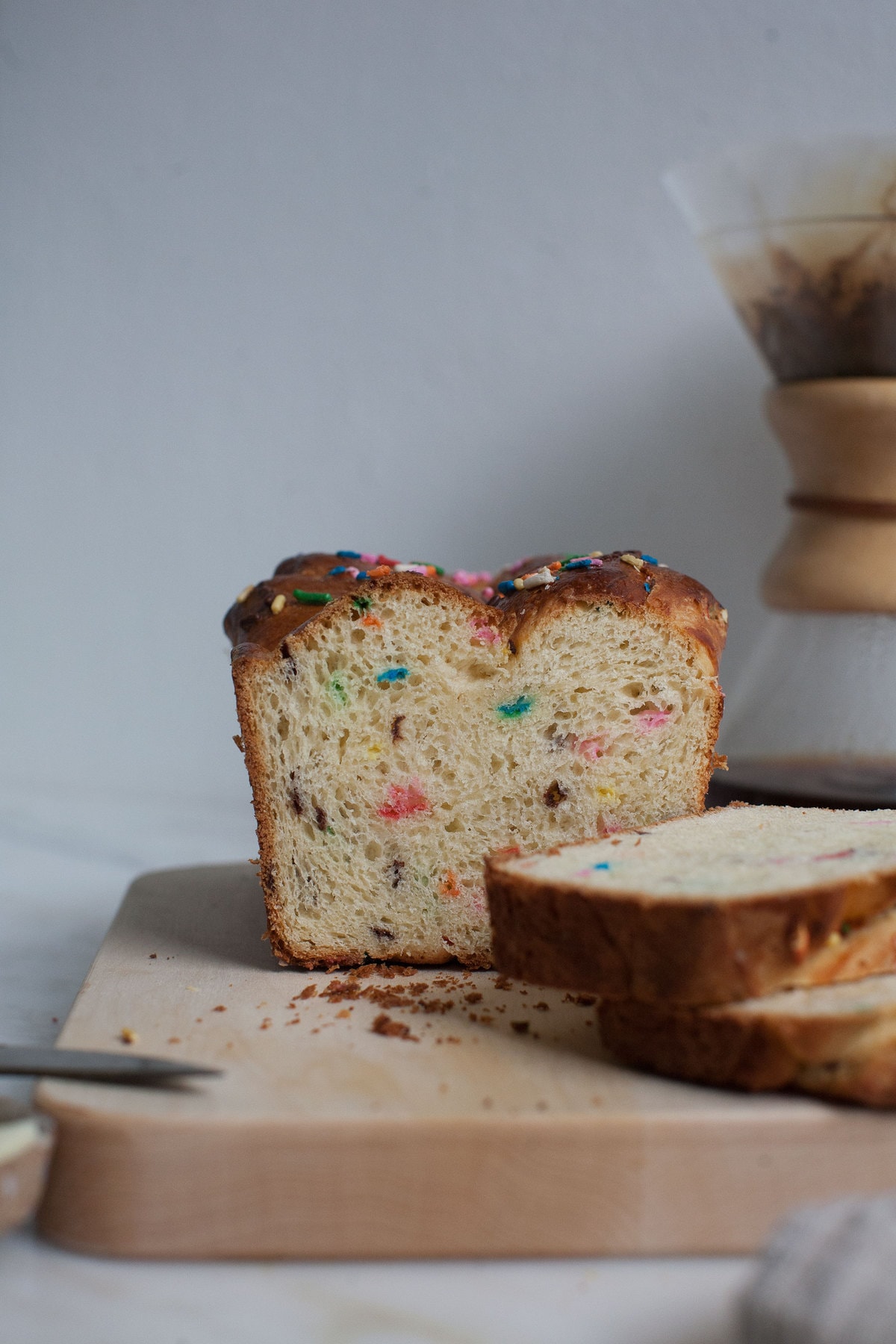 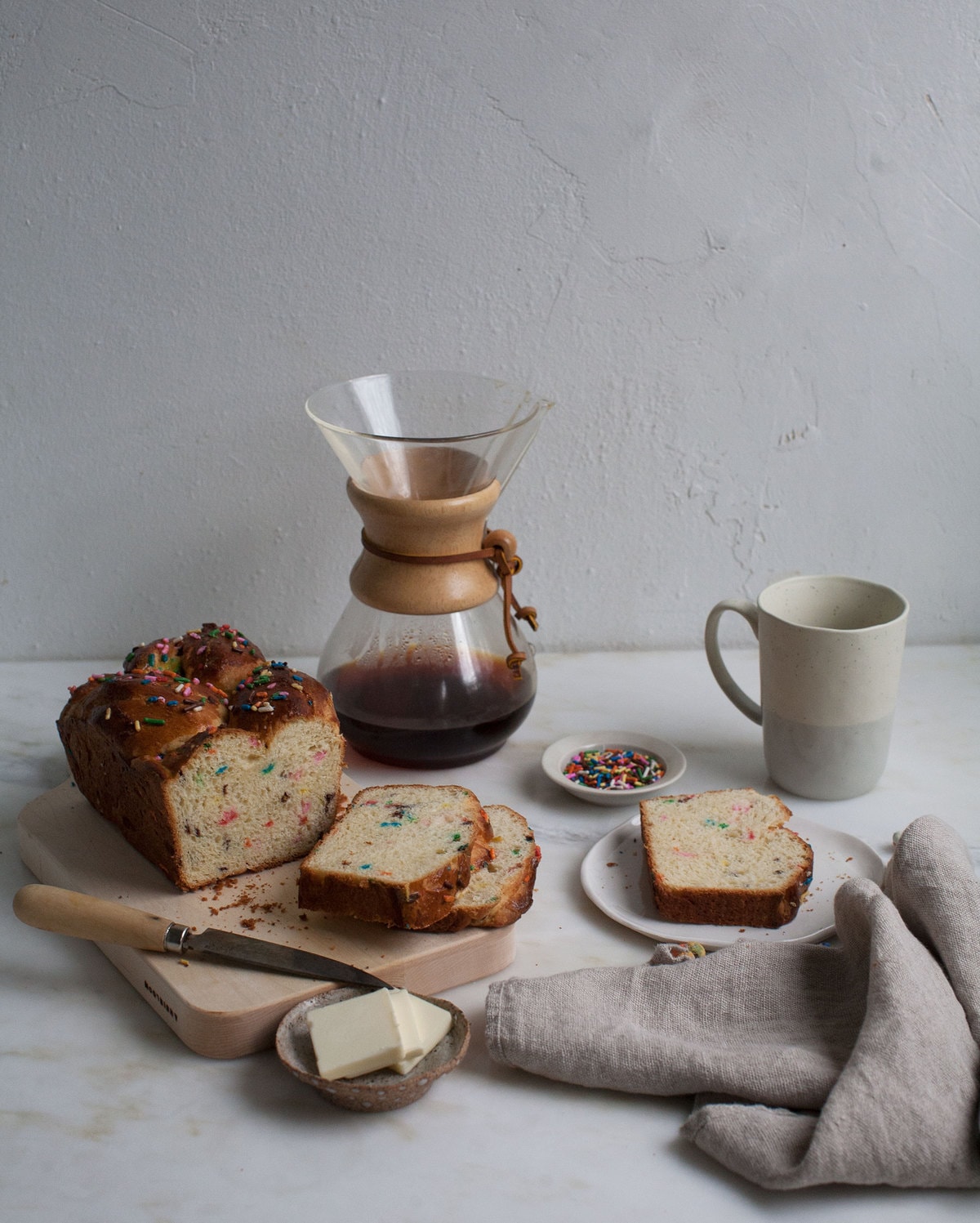 *In my testing, I found that the milk powder was optional. If you're at the store, buy it--it adds a bit of a creamier texture to the milk. But if you have everything at your house right now, you can skip it and the bread will still totally be delicious.