5 from 1 vote
Published Jul 10, 2017Last Updated Dec 22, 2018
Jump to Recipe
Pin RecipeLeave a Comment
I always feel blessed that I have a career where I get to make things every single day (basically any creative person’s ultimate goal). Sometimes it doesn’t always feel all that romantic, particularly when I’m wiping… 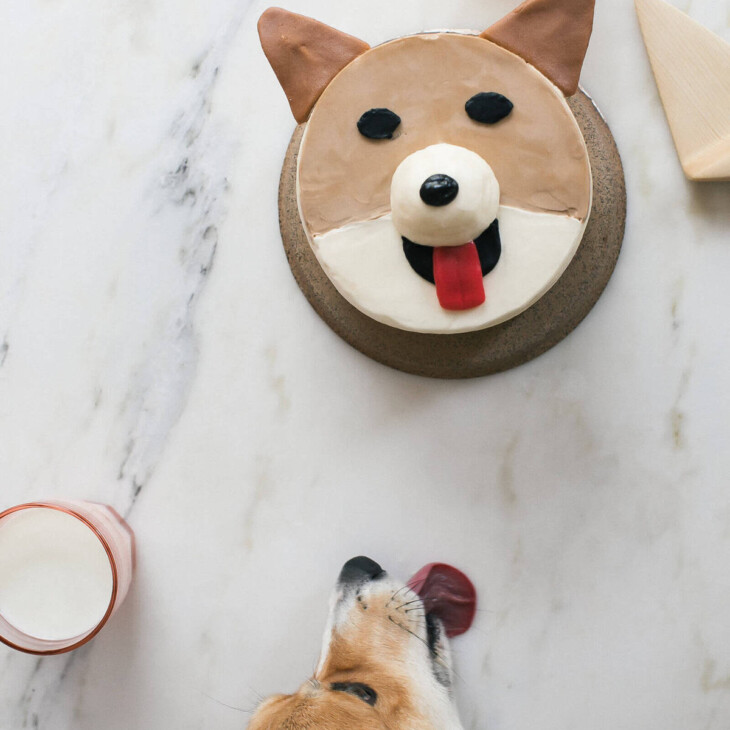 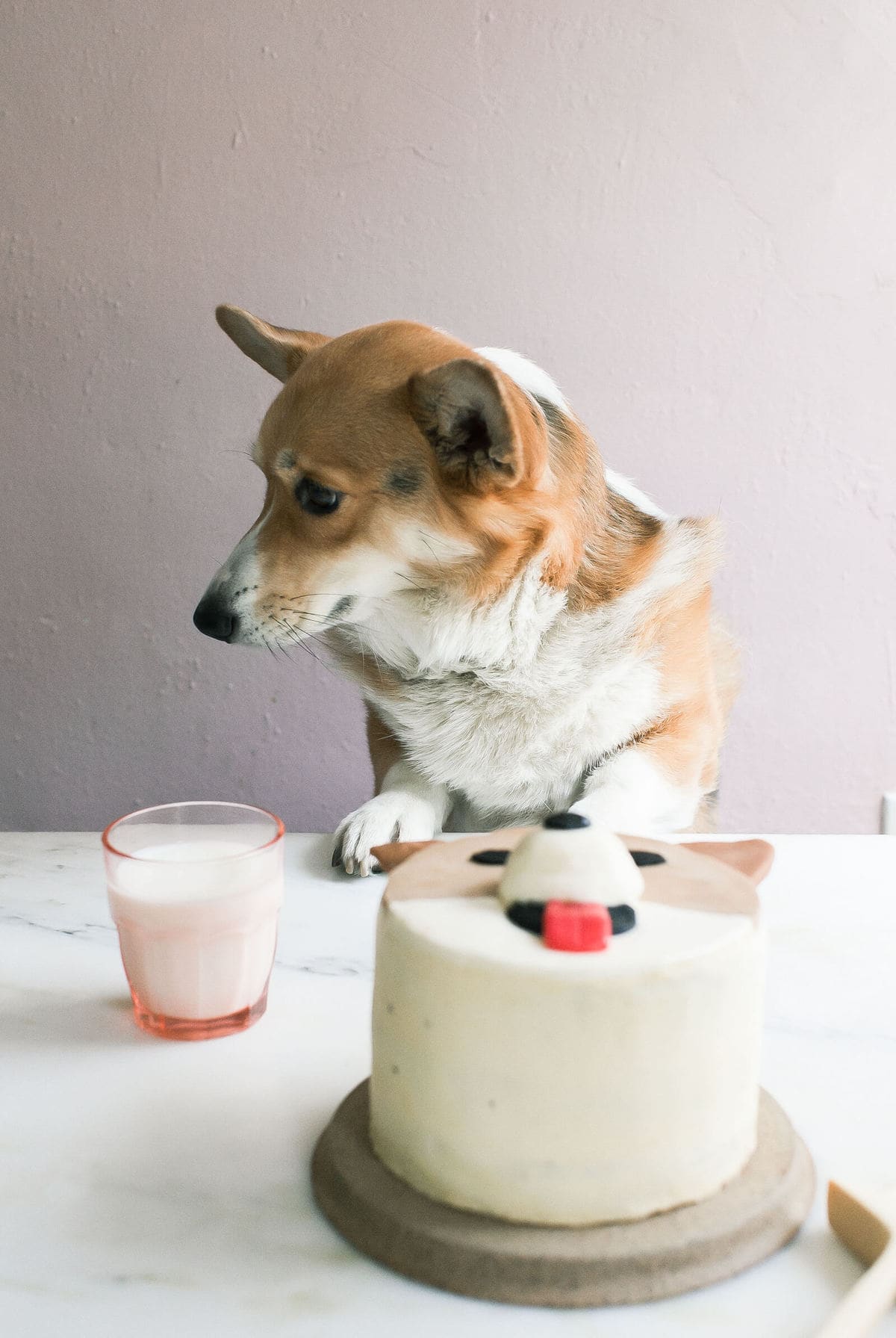 I always feel blessed that I have a career where I get to make things every single day (basically any creative person’s ultimate goal). Sometimes it doesn’t always feel all that romantic, particularly when I’m wiping grease off my kitchens’ walls or washing an absurd amount of dishes, but even in those moments, if I think kinda hard, I’m pretty happy.

Another plus about this creative world called blogging, I get to meet other creative people, too. Last week, I drove like five minutes away to hang out with Alana and make this cake. 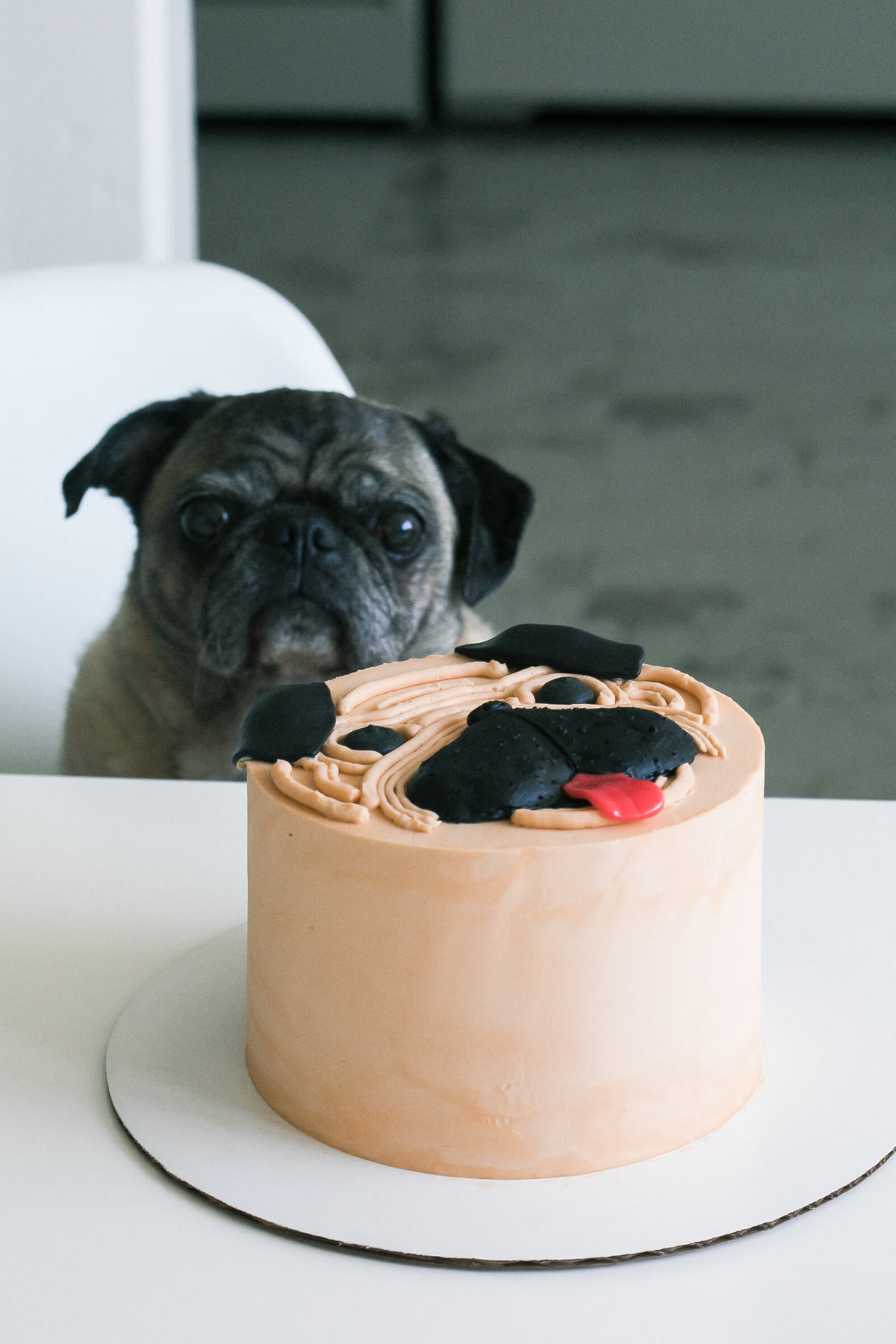 She makes the most unreal cakes. A lot of them are just total pieces of art that I would be shy to eat. A bonus, her cakes taste SO good. I was at a friend’s bbq and she brought some corgi cupcakes and they were so fluffy and so soft. I was in love.

SO, we thought it would be fun to make side-by-side dog cakes. I did the corgi, inspired by that feral beast I own, Amelia. And she made a pug cake, inspired by her two baby pugs. 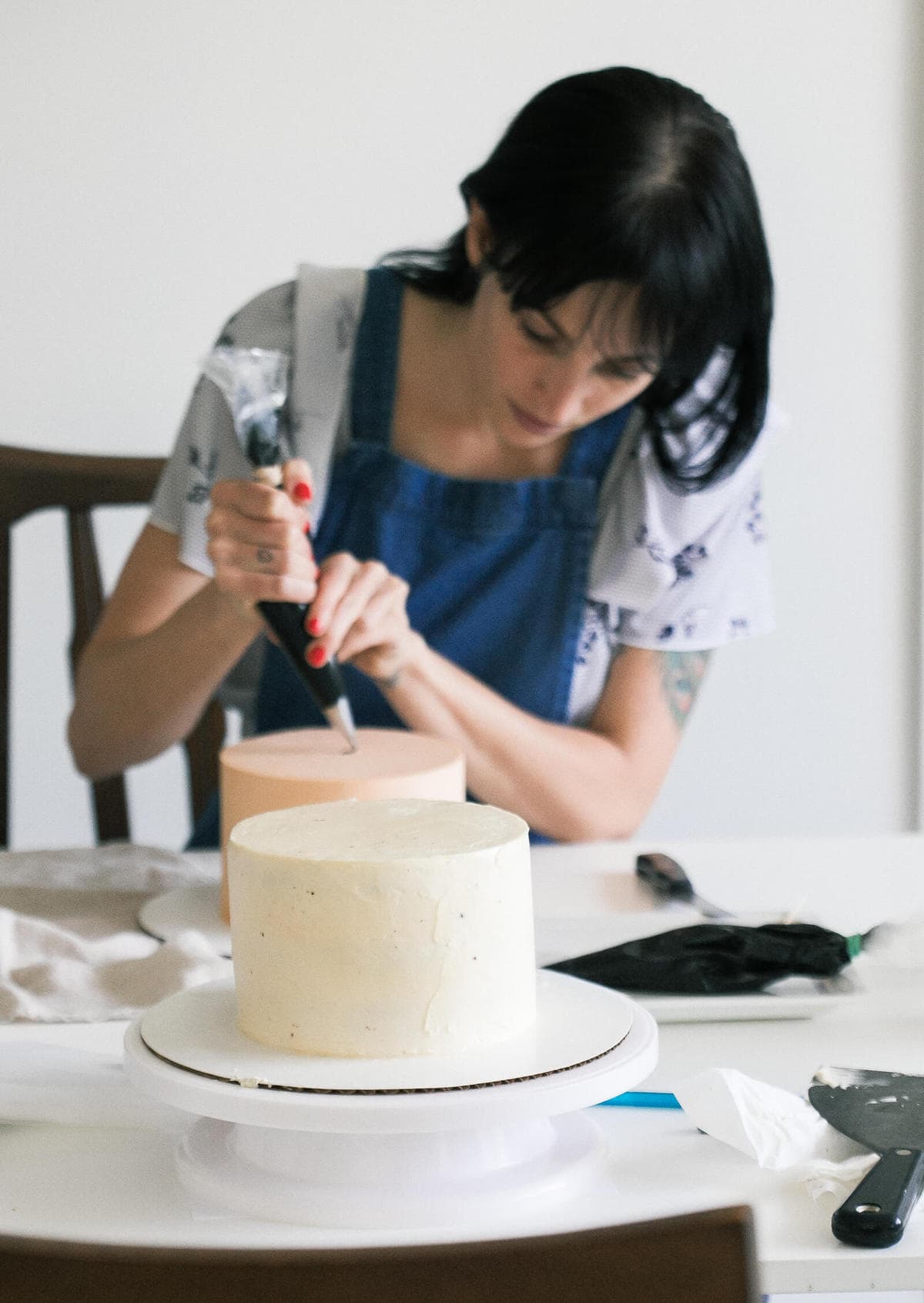 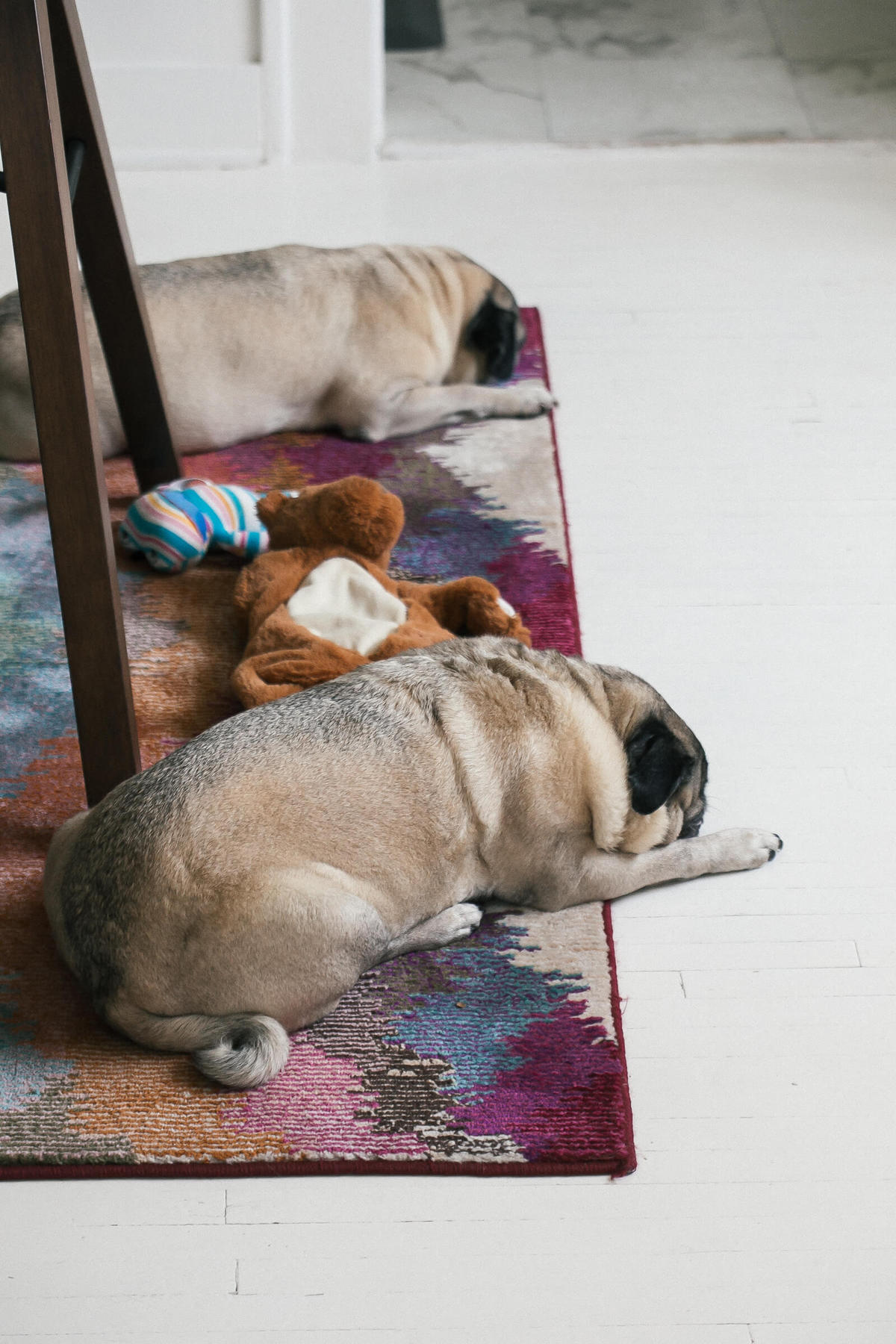 One-Bowl Chocolate Cake: To start things off, I made a three-layer (6-inch) chocolate cake. I used my one-bowl chocolate cake recipe because it is SO easy and delicious. 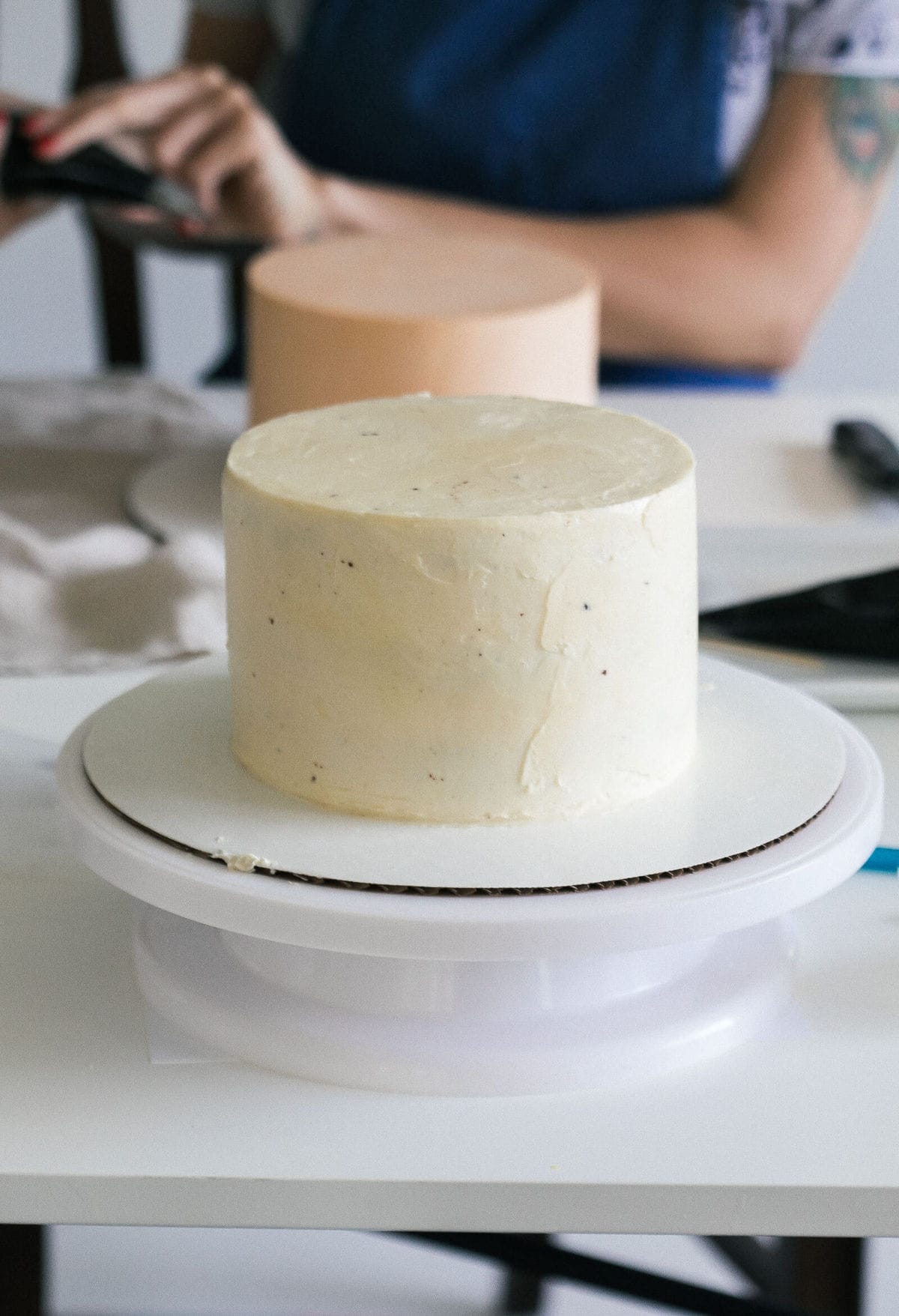 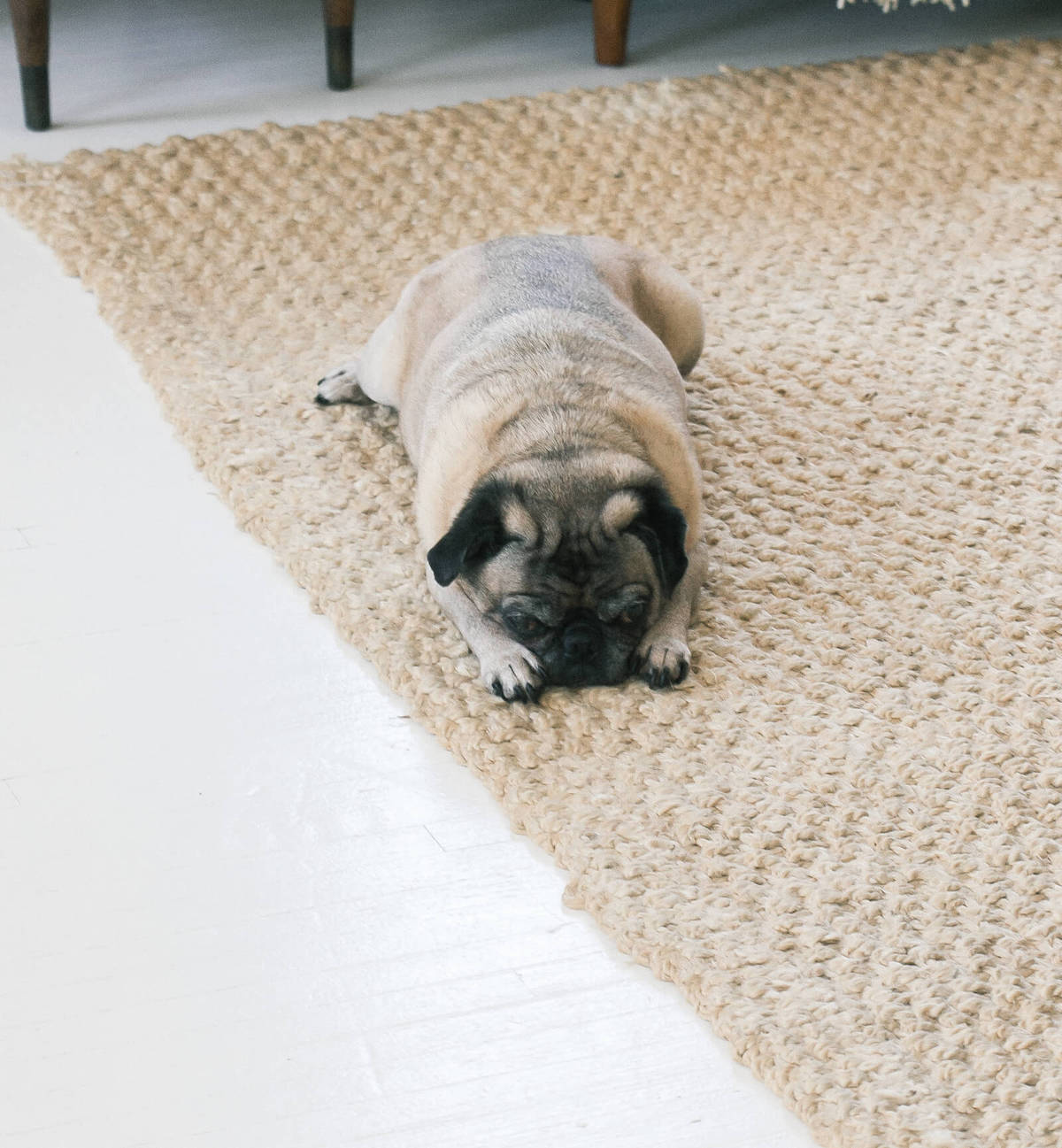 Big Batch of American Buttercream: The outside is a simple American buttercream (butter + powdered sugar) that Alana made. Here’s a link to a solid recipe. Alana separated the big batch into three different bowls and made a light brown color, black and white.

The Foundation of the Face: To start, I wanted to emphasize that corgis are usually light brown or sometimes black on the top part of their face and white on the lower half. (All corgis are different tho!) 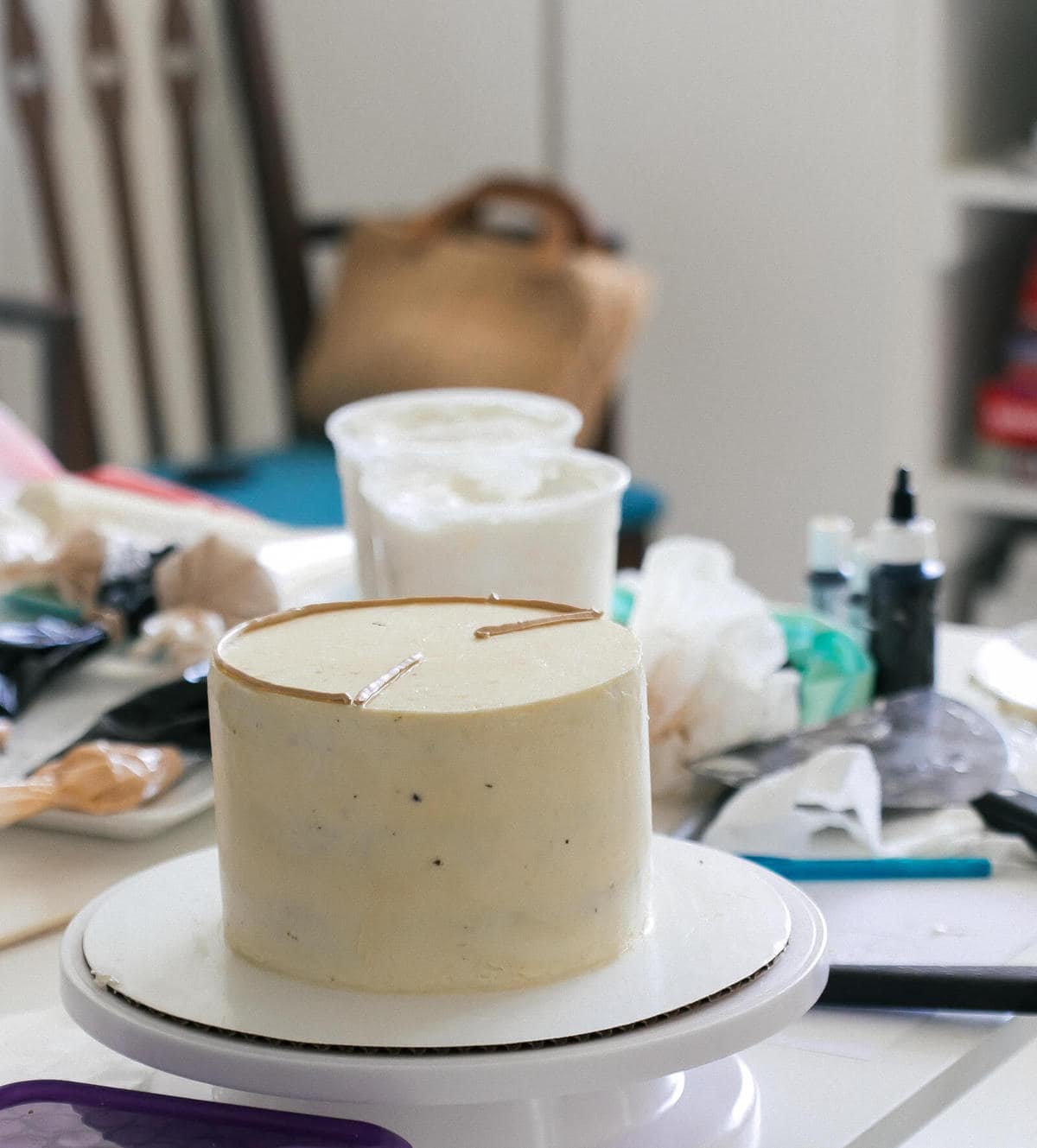 So I made a sort of slanted V outline. And then filled it in with the frosting. I smoothed it out using a small offset spatula and then stuck it in the freezer for about 10 minutes. 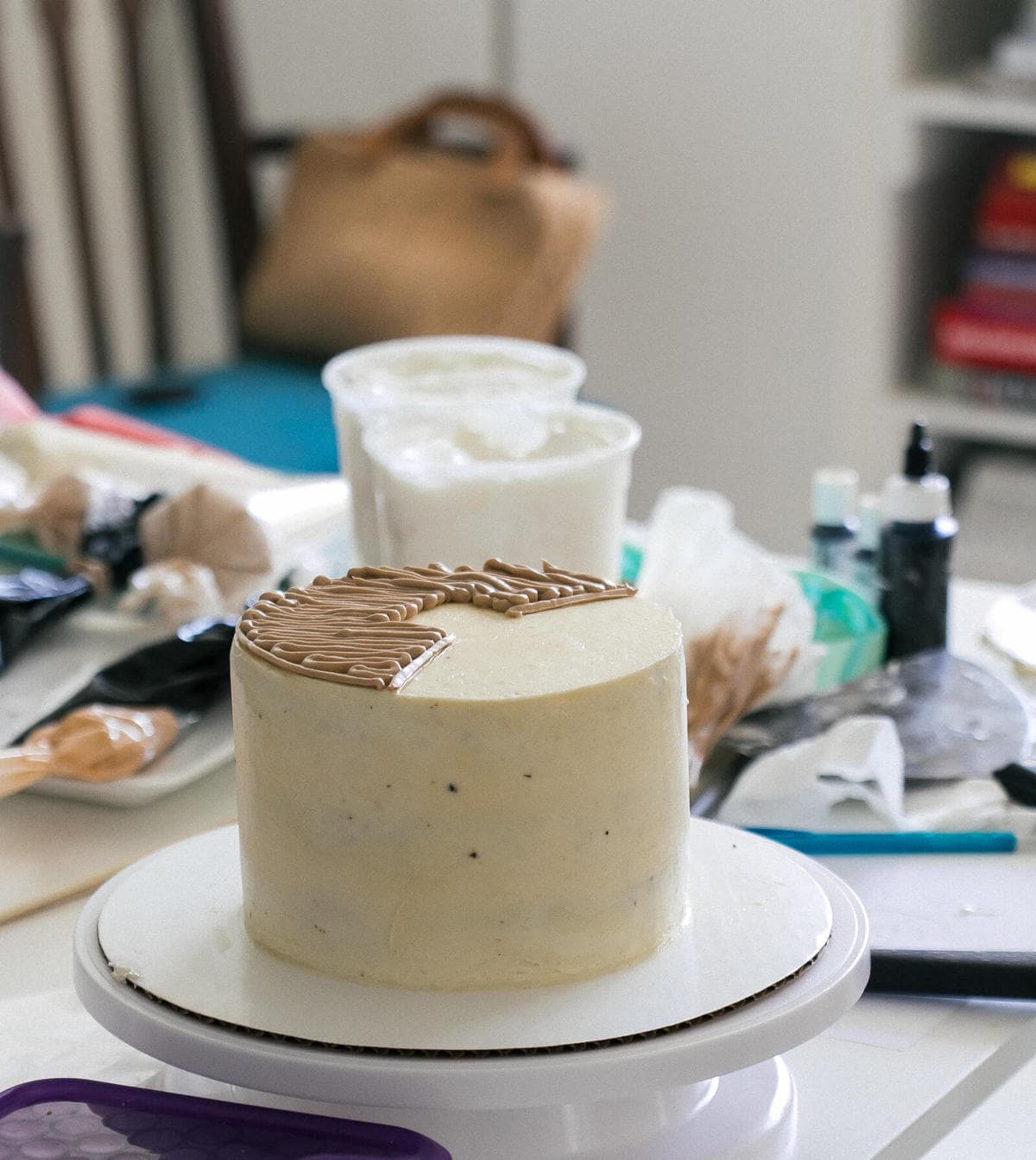 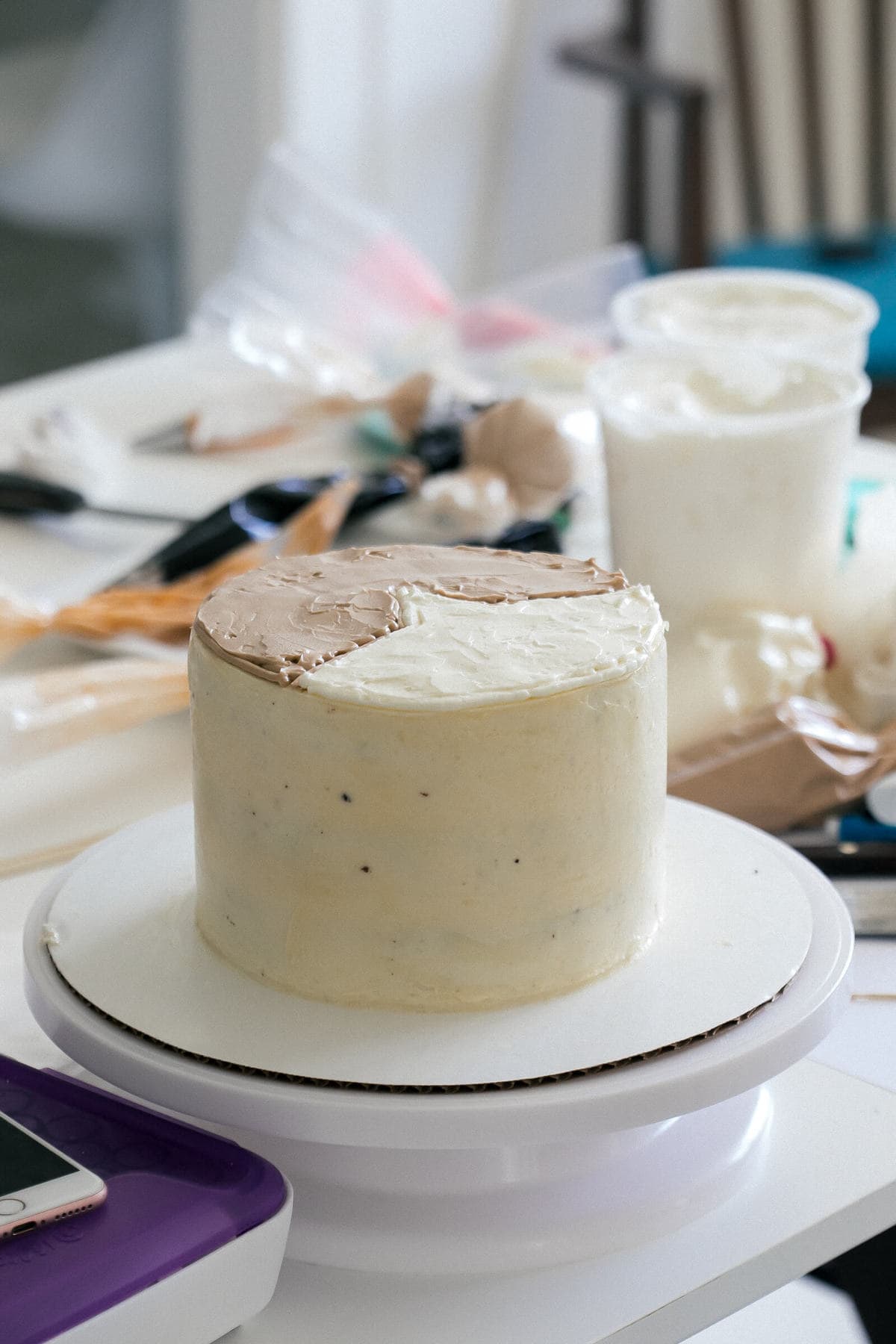 Note: during this assembly, you’ll notice that the freezer/fridge is your friend.

The Ears: While the cake was in the freezer chilling out, I made the ears.

I made these with marzipan! I’m not gonna lie, I sort of can’t stand the flavor of marzipan but it really worked in creating a stable ear. I mixed a drop of black food coloring and a drop of yellow food coloring and mixed it all together until it turned into the perfect shade of brown. 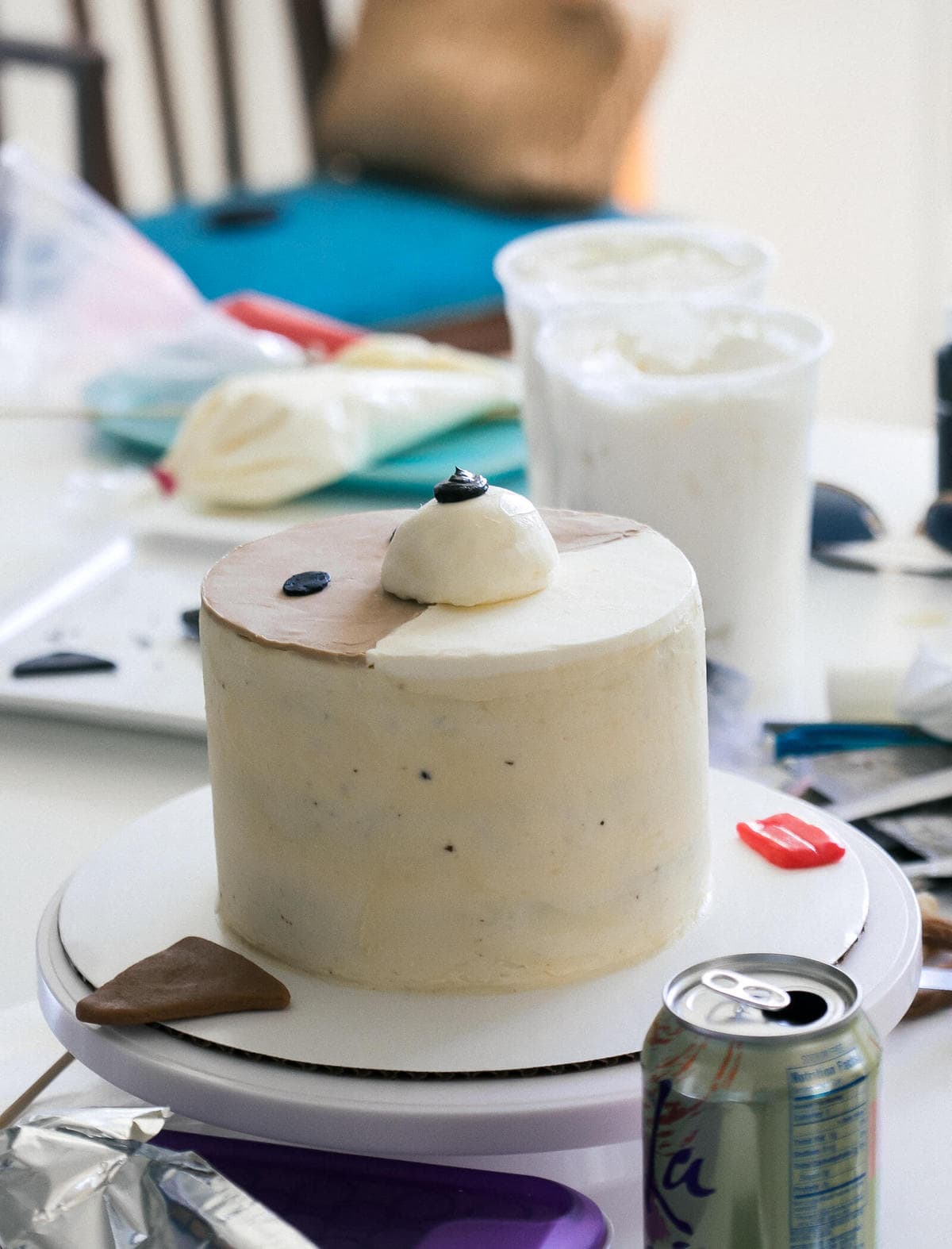 I sliced them with a knife to be the perfect shape. And then used my fingers to smooth the edges out a bit. If you don’t do this, then the ears will look a bit too fox-like.

The Nose: It was Alana’s idea to make the nose a bit more pronounced and 3-dimensional and I think it really works. She plopped on a round ball of frosting as the nose and then we stuck in the freezer to set.

I smoothed it out with my finger and then piped on the tip of the nose with black and piped out two almond shaped-eyes. Amelia’s eyes are my favorite part about her because they’re so big and she has the prettiest eyelashes. I wanted to attempt to include those but I got a bit overwhelmed with the idea of adding those.

The Mouth: Using the black frosting, I added the base for the tongue. It was sort of a U-shape and was super easy to pipe on. 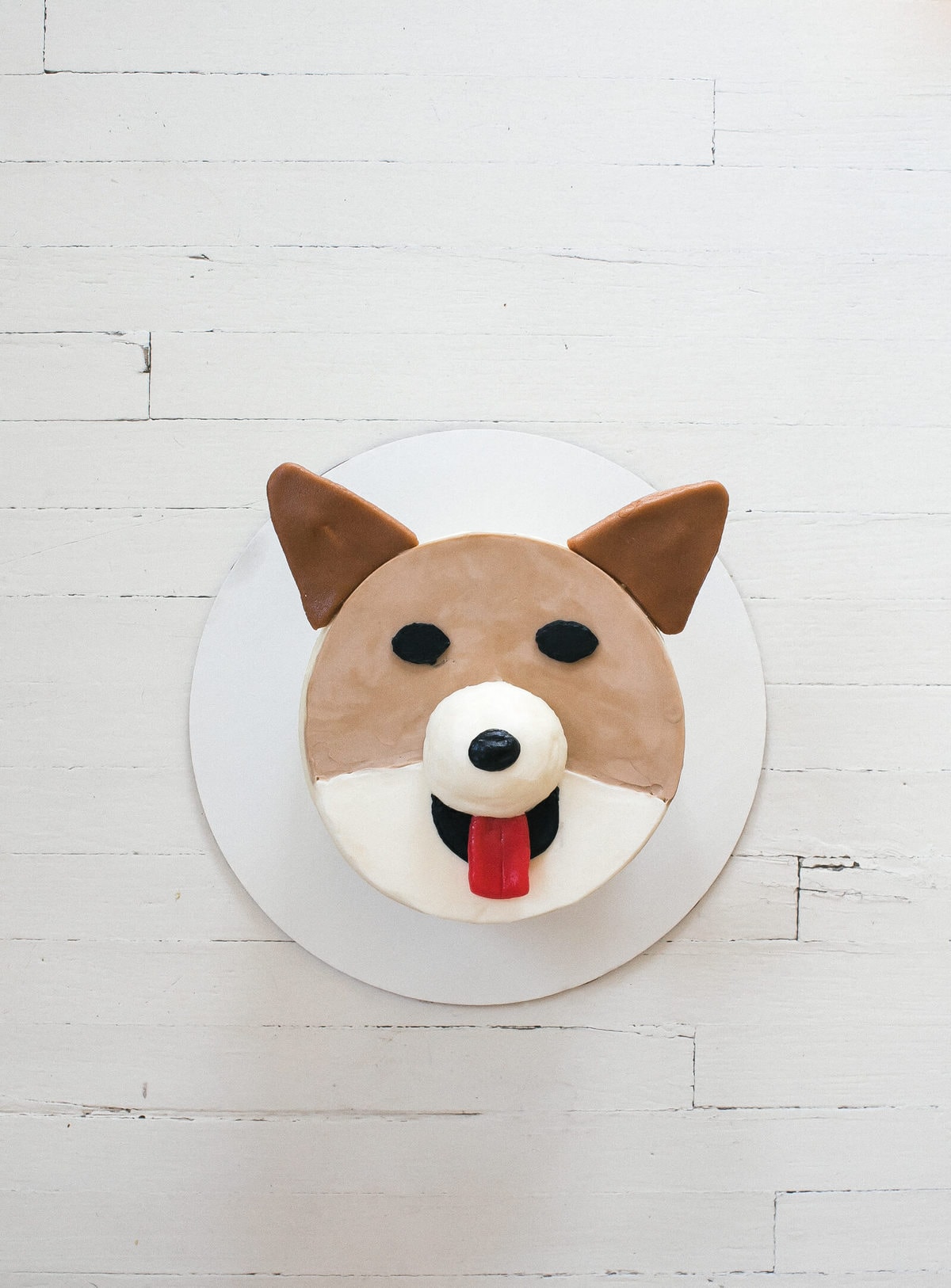 The Tongue: Alana bought Airheads. Yes, those gross/delicious things we ate as kids! I thought it was a genius idea because the cherry flavor looks exactly like a tongue.

All it needed was a slice down the center so it looks a bit more like a tongue and some rounded edges. 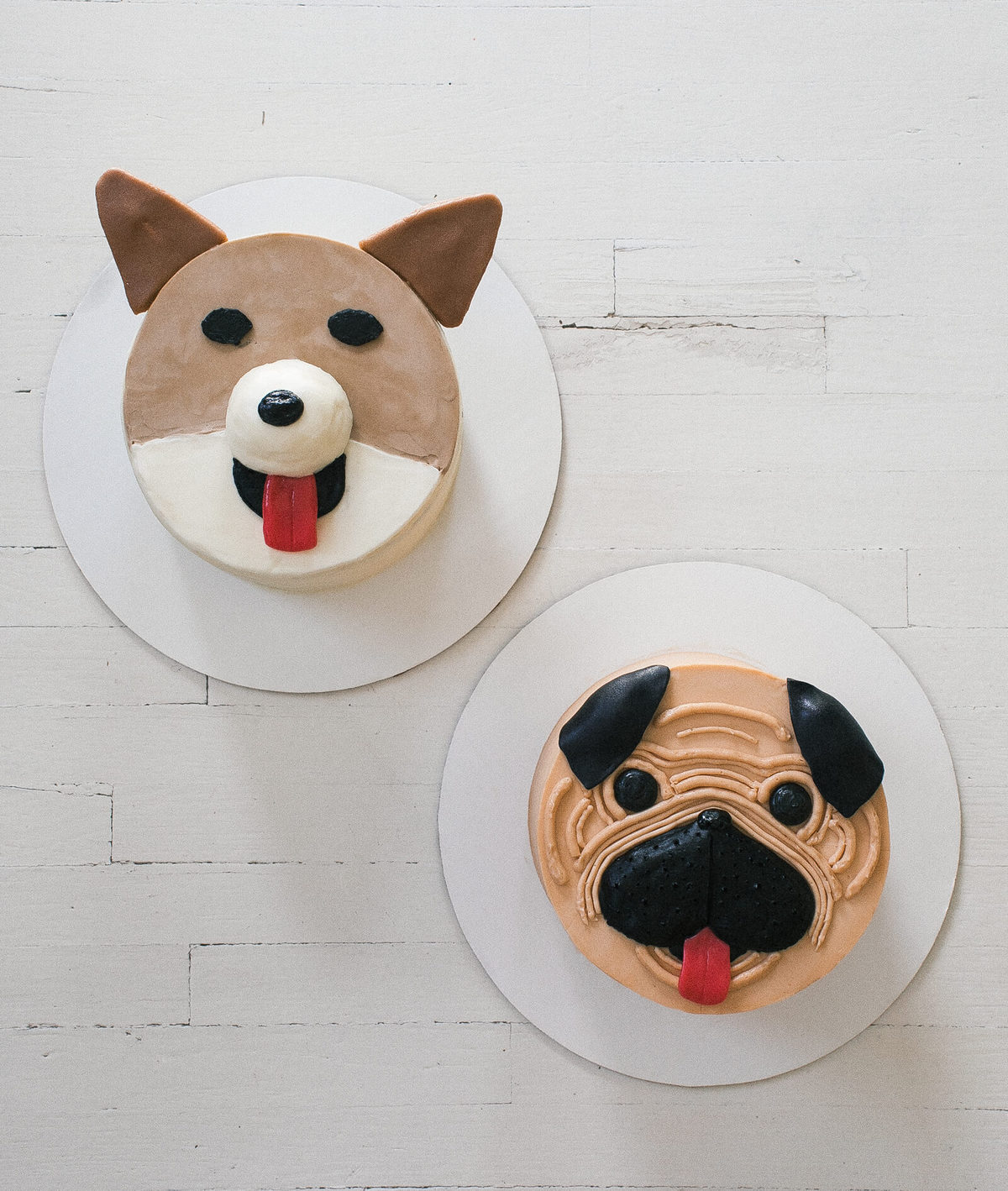 I secured that on and placed the ears onto the cake and BOOM! 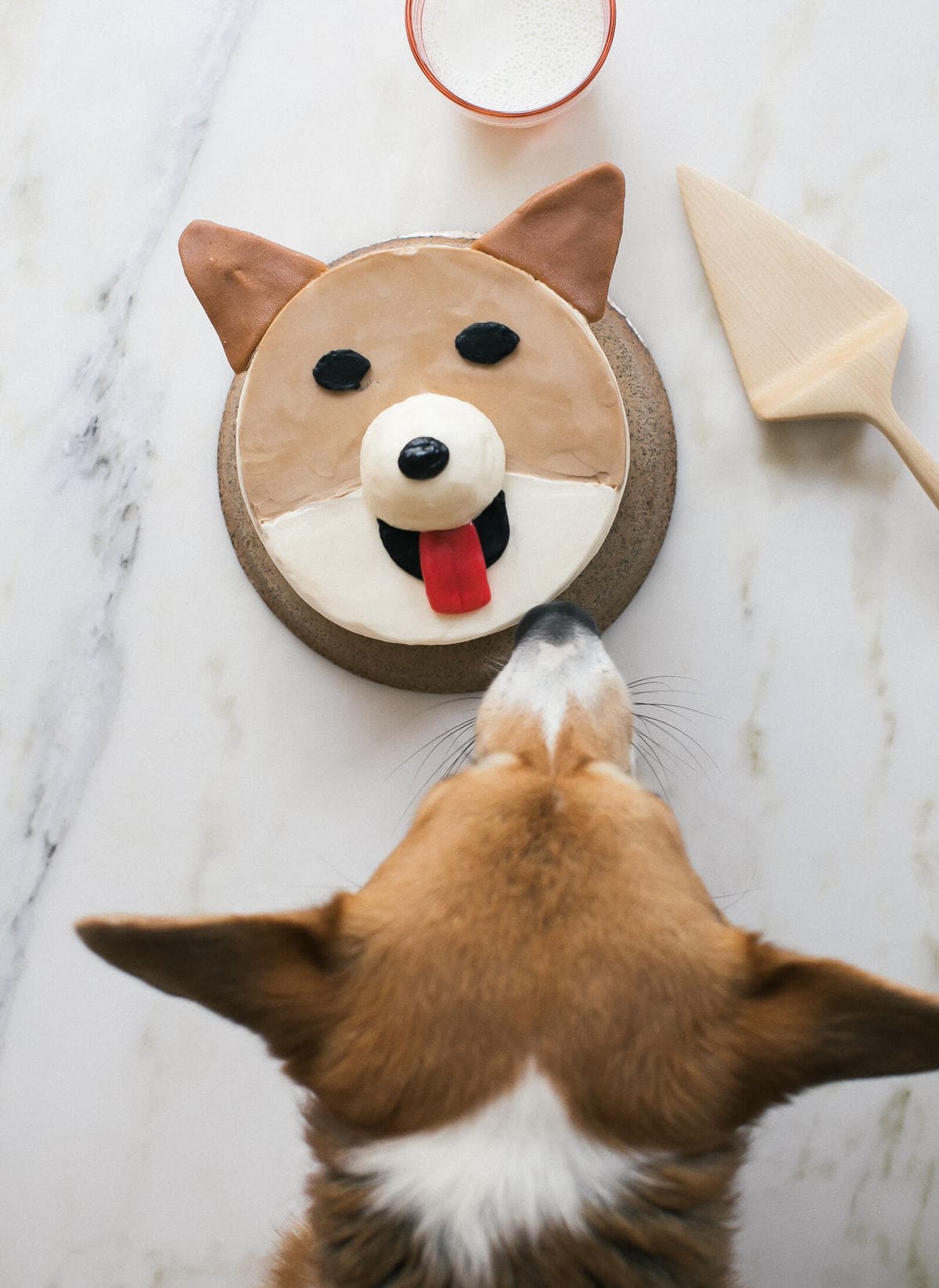 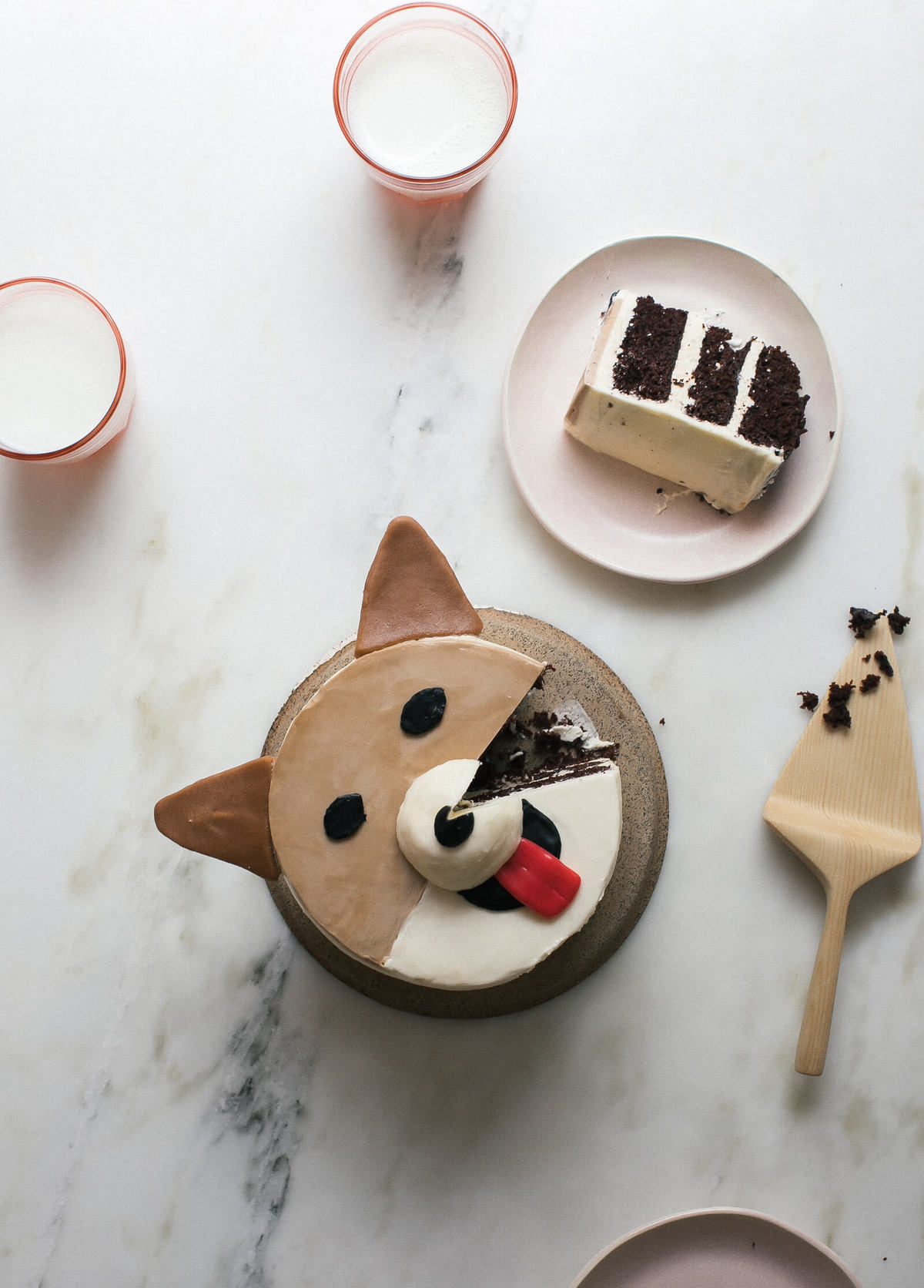