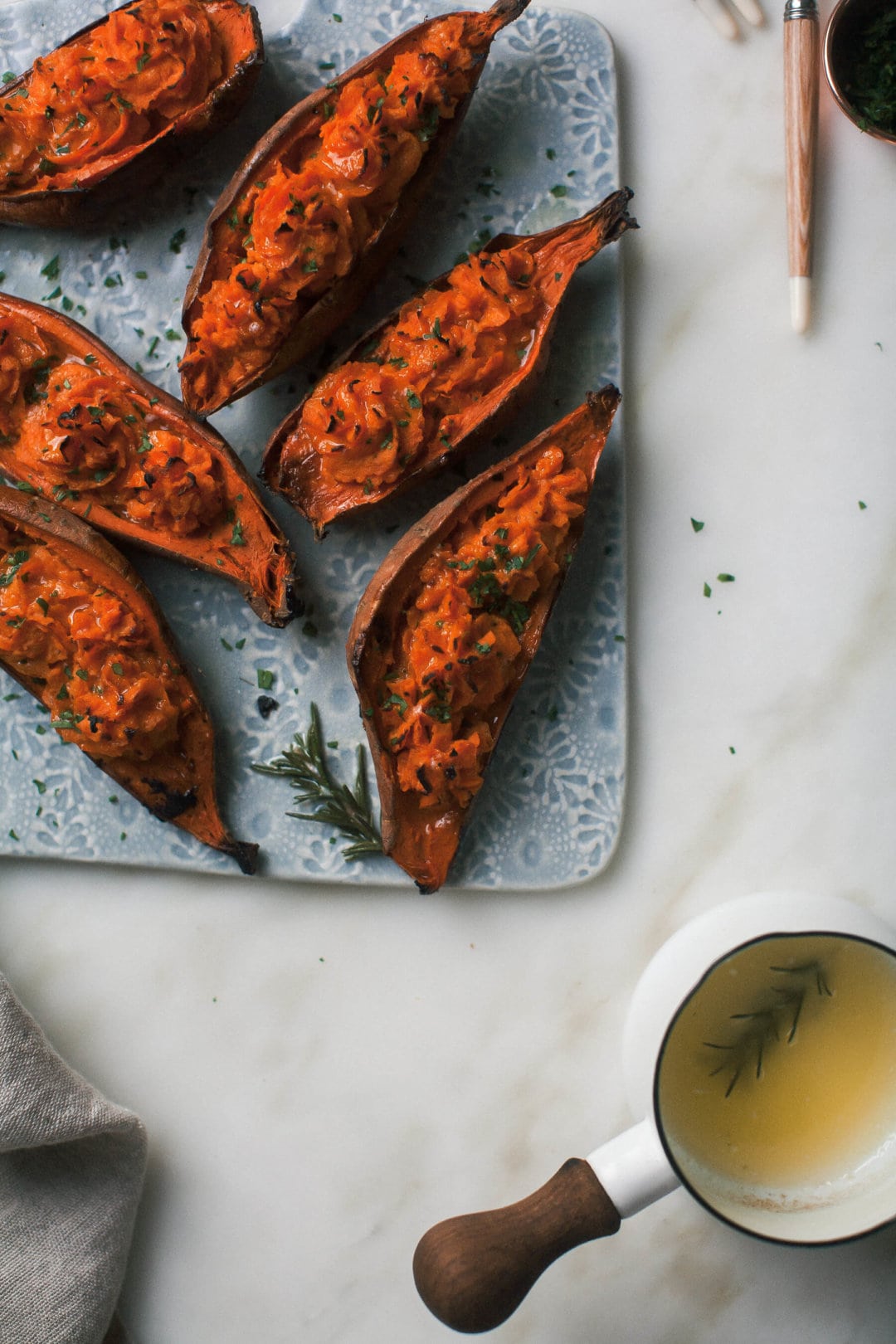 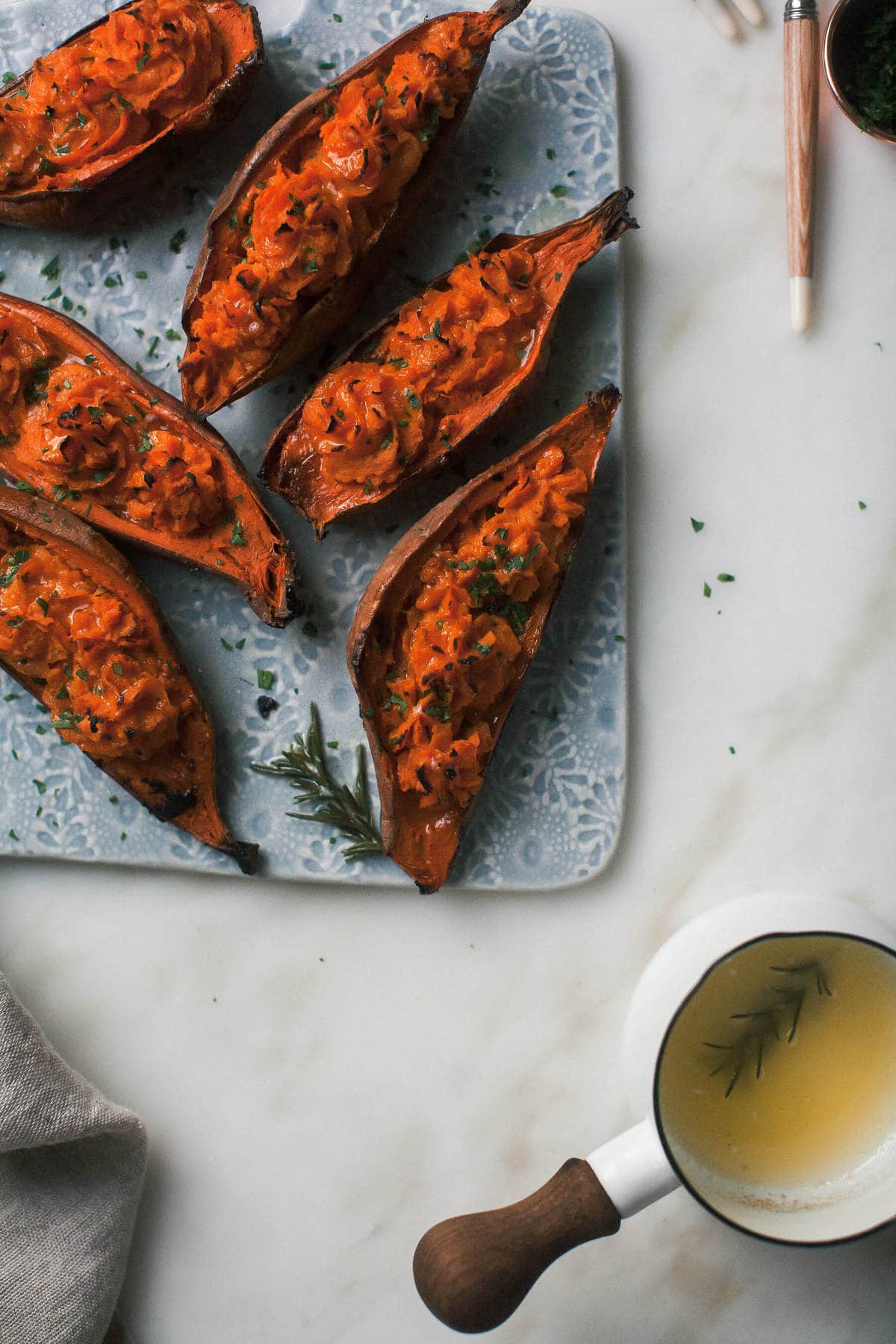 Thanksgiving is next week! I kinda don’t have plans. Is that weird? I think it’s going to be a Friendsgiving situation.

Usually Josh and I do something family-oriented for Thanksgiving but this year I wasn’t in the mood to travel (and plus I’ll be in Seattle next Saturday!) so we’re in LA with our friends.

We were thinking of going out to a restaurant, which I did once (I think when I was a kid) and LOVED IT, mainly because that meant zero dishes, but then some friends invited us over and I think it’ll be nice to be in a home around a bunch of people. 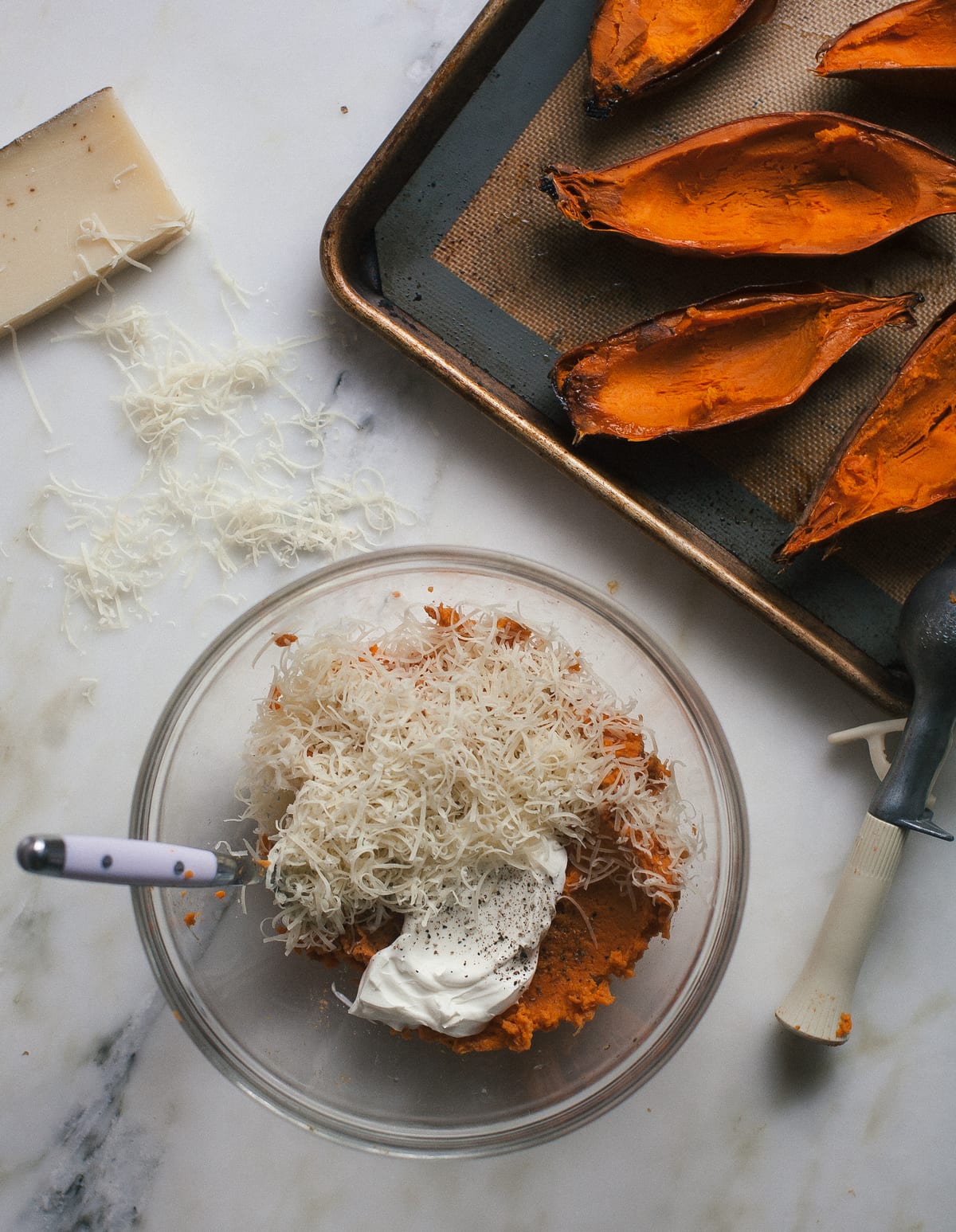 I made this yesterday because I remember how much I love sweet potato and comté cheese together. But I switched it up by adding caramelized onions into the mix and drizzled a bunch of rosemary butter all on top of ‘em. Dreamy! 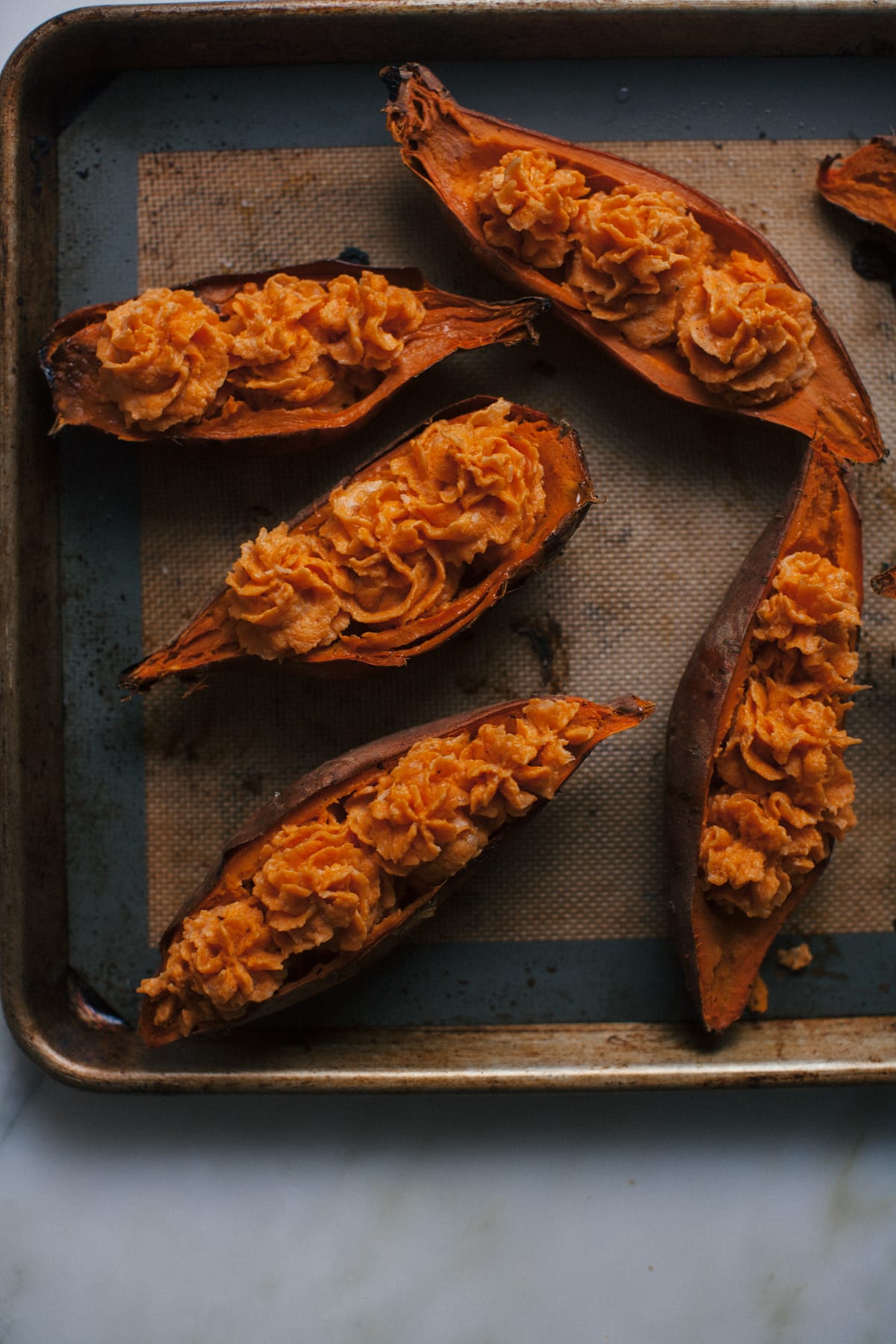 The trick to making twice baked sweet potatoes pretty is adding the mixture to a star piping tip. Star piping tips are a gift from the baking gods because even if you’re a terrible piper, the star-tip makes everything look pretty!

After I made these yesterday, I decided that this is dish I’m bringing to Friendsgiving. I’m also thinking of bringing this fennel dip because I remember last year we ate it SO fast after it was shot.

Are you guys planning everything yet? 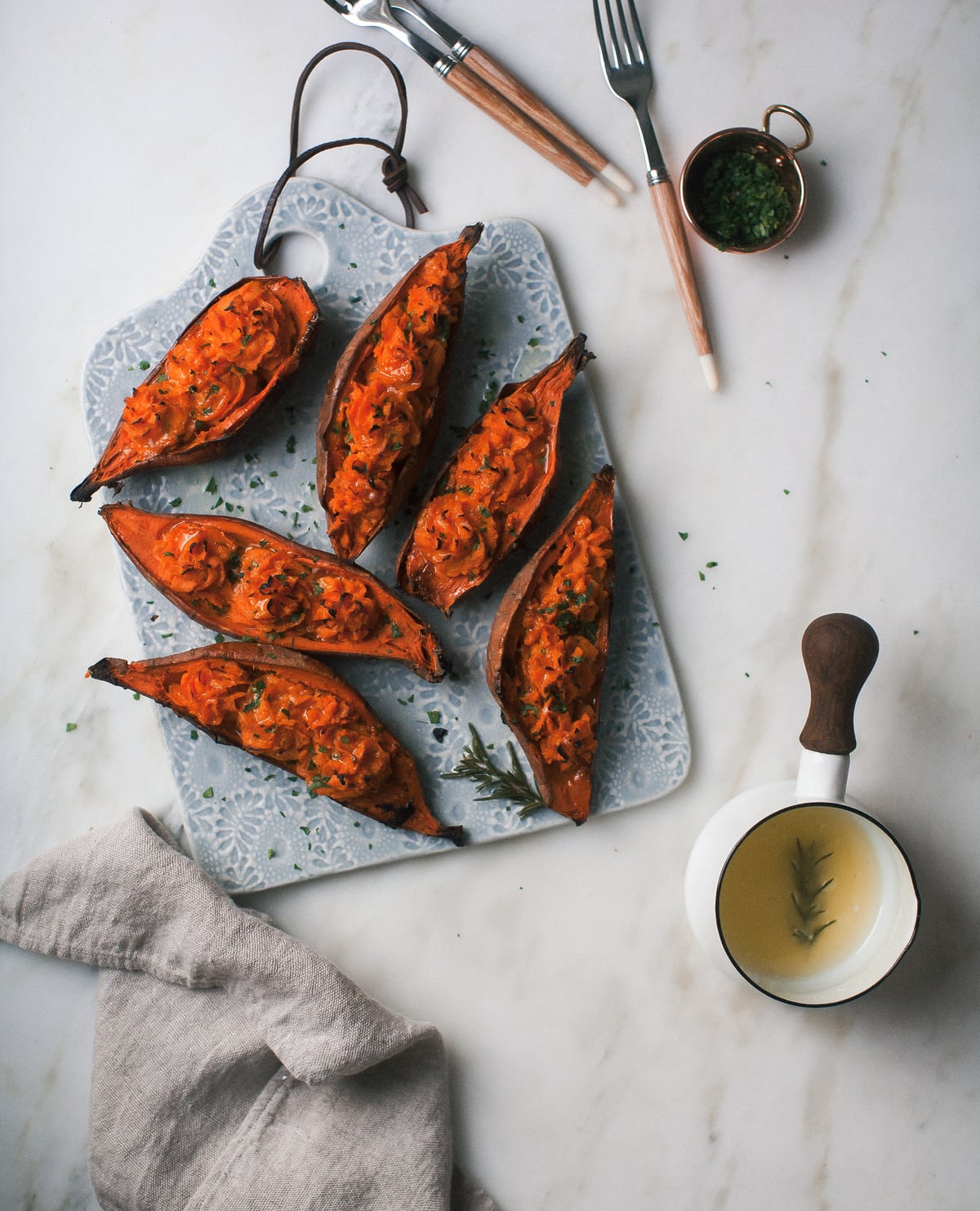 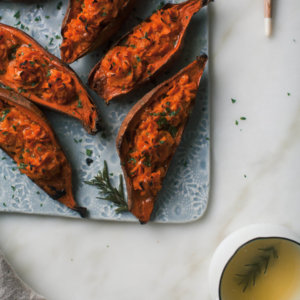 *To caramelize onions, add a teaspoon or two of oil to a medium skillet, set over medium-low heat. Add sliced onion to the pan, moving then and stirring them, every 2 to 3 minutes or so, until caramelized, about 25 minutes. Remove from the heat and transfer to a small bowl. *If you can’t find comté cheese (I found mine at Trader Joe’s), Gruyere is a good substitute! And I also think smoked gouda would be delicious.
Serving: 7g
Did you make this Recipe? Tag me Today!Tag @acozykitchen on Instagram and hashtag it #acozykitchen
November 16, 2016 by Adrianna Adarme 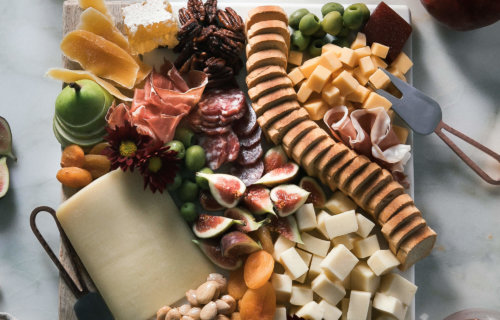 How to Build a Fall/Winter Cheese Board 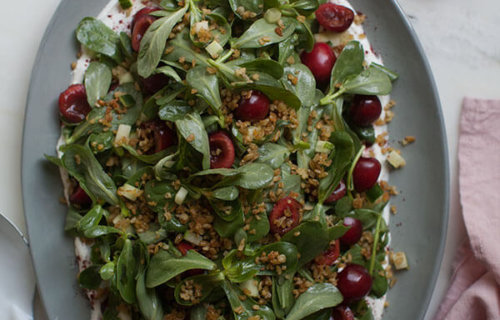 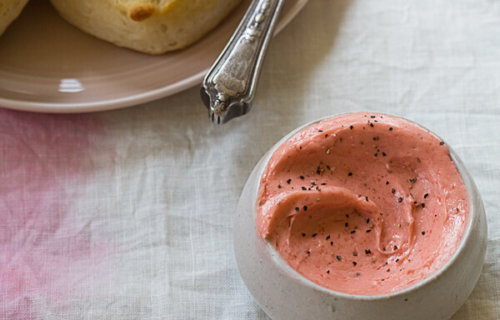