Published Feb 19, 2016Last Updated Jan 27, 2019
Jump to Recipe
Pin RecipeLeave a Comment
I’m pretty sure there’s a law somewhere that states that if you’re in a cabin in the middle of the woods, you have to bake biscuits in a cast iron with fluffy socks on. I did…
Prep Time: 15 minutes
Cook Time: 17 minutes 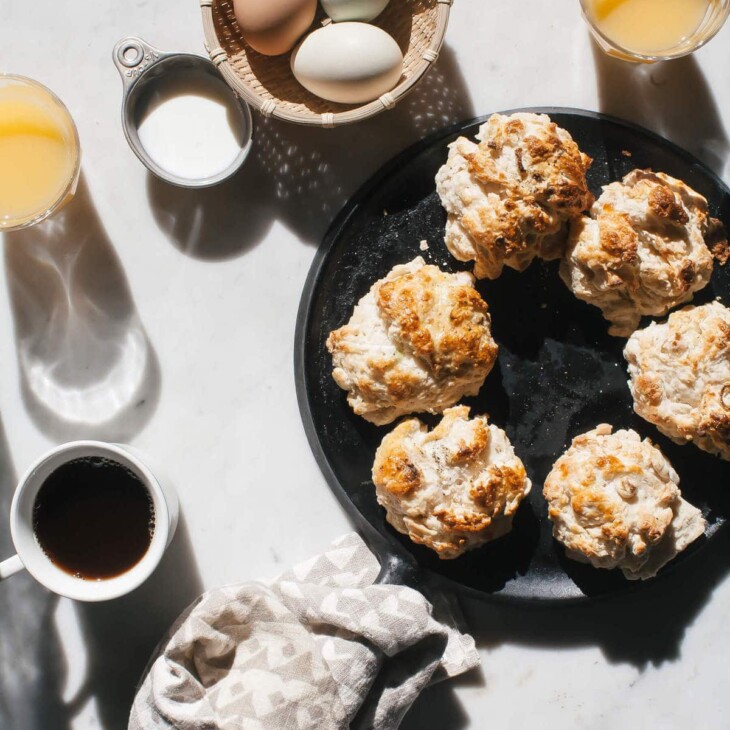 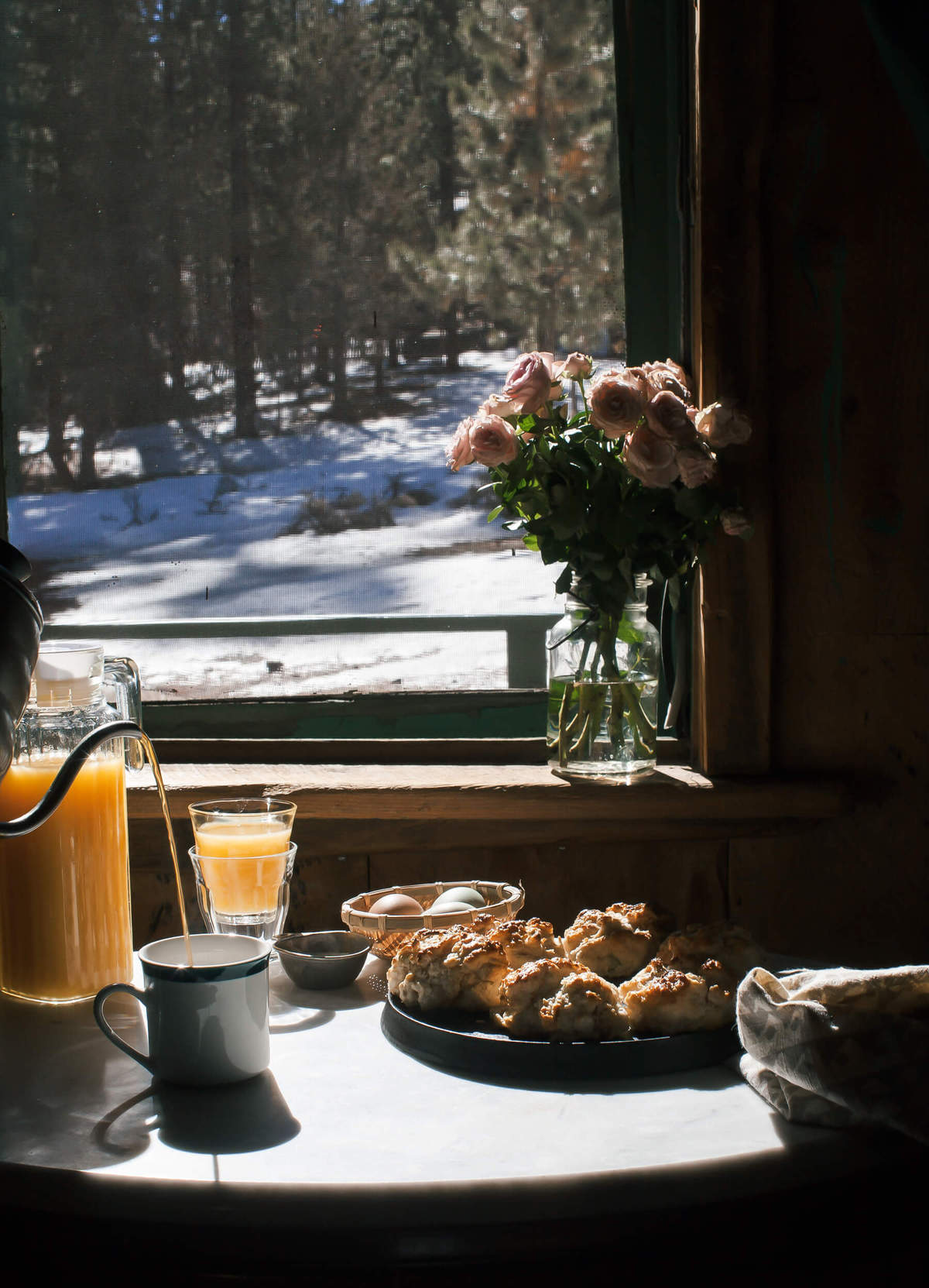 I’m pretty sure there’s a law somewhere that states that if you’re in a cabin in the middle of the woods, you have to bake biscuits in a cast iron with fluffy socks on.

I did just that this past weekend when Josh, Amelia and I headed to Big Bear for the Valentine’s Day/President’s Day weekend situation. 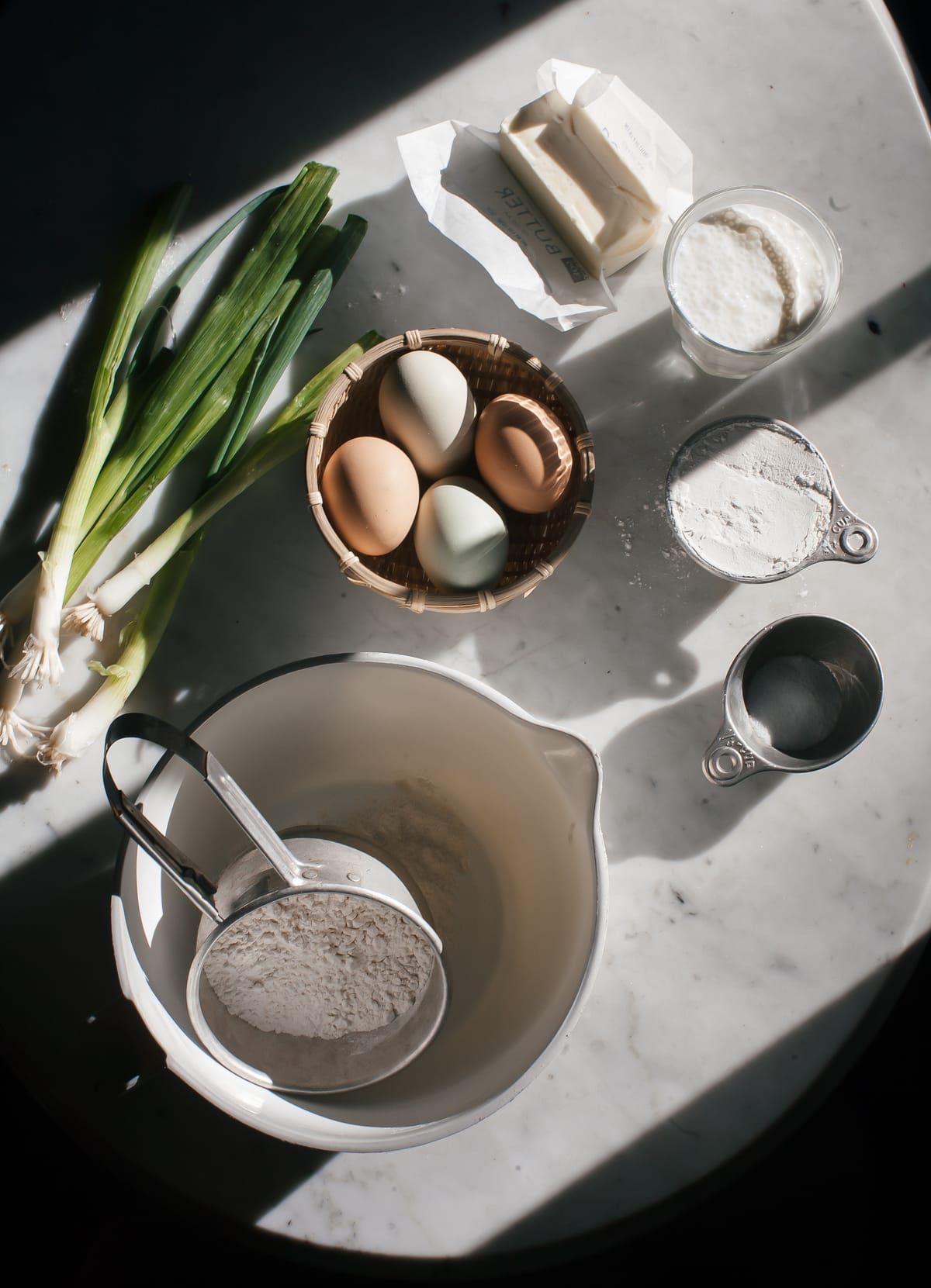 I found this old, cozy cabin on AirBnB and booked it a month ago, when snow had just fallen and I was dreaming of a very snowy time. Unfortunately temperatures have warmed and a lot of the snow melted but it didn’t stop me from making a cozy ass breakfast for two (errr…three bc Amelia had half a biscuit).

Look at her in this parka. I mean….she hates me/it but also she loved the snow. I’d turn around and find her with her head buried in the snow and trying to bite it. 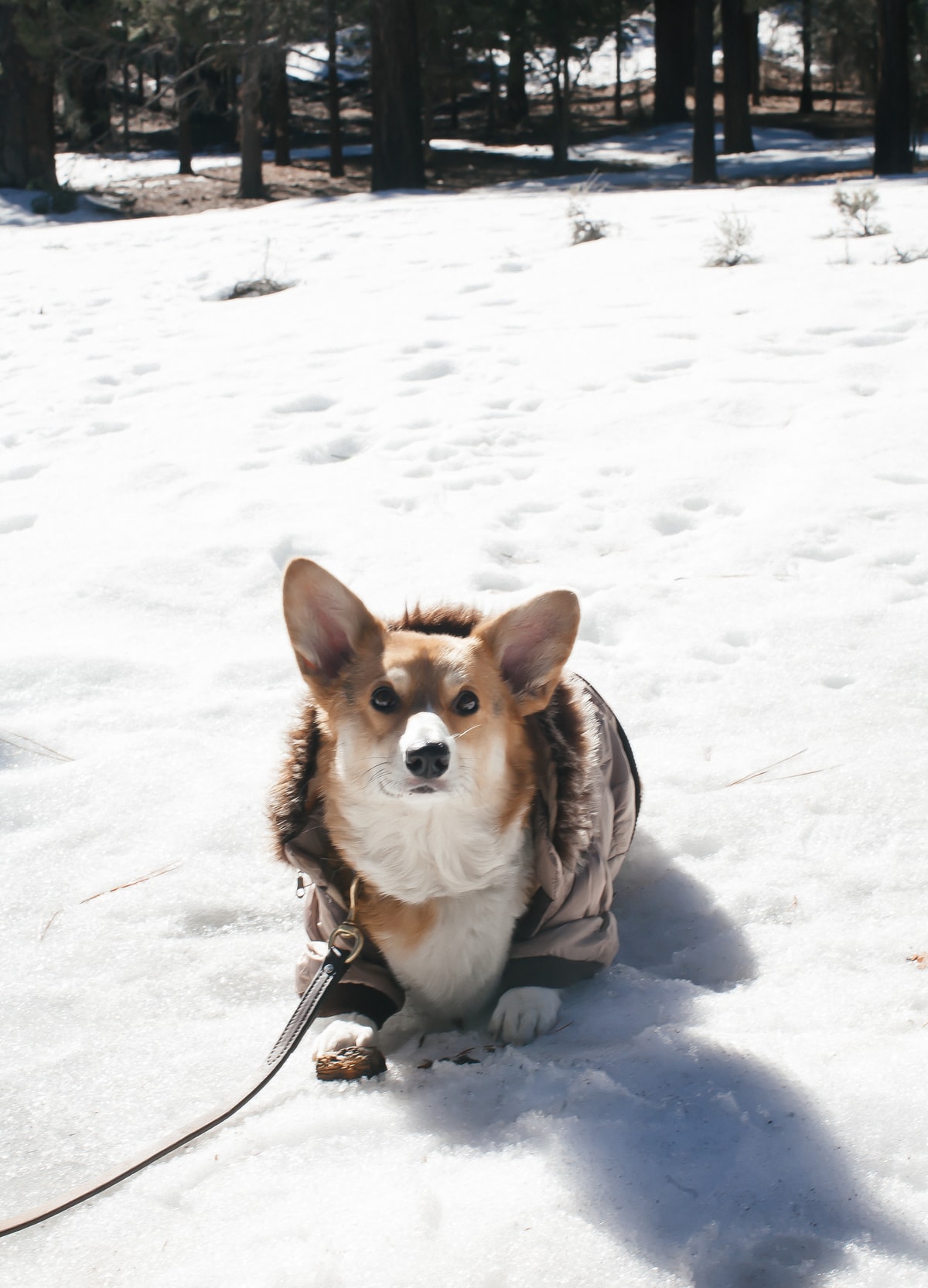 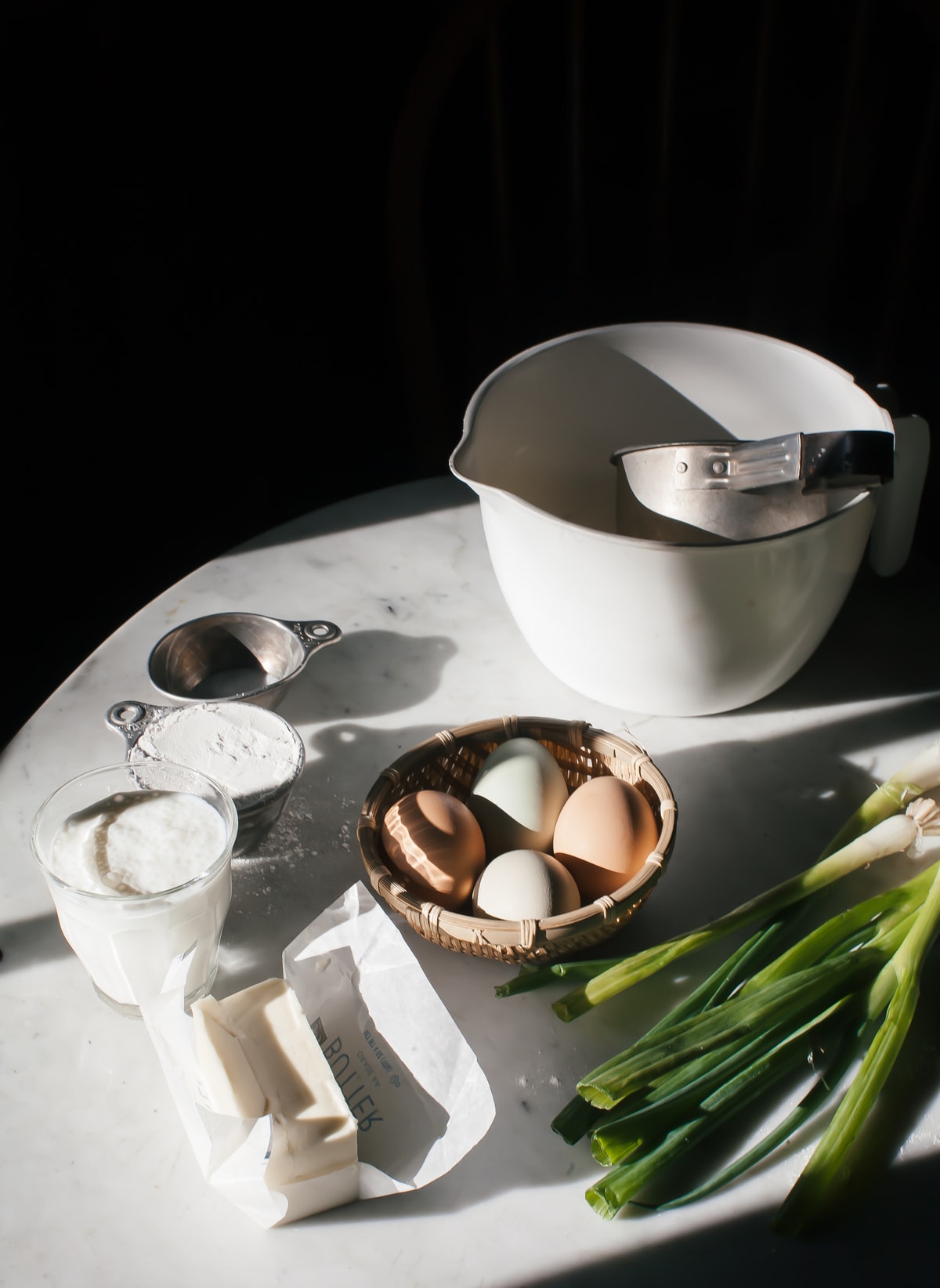 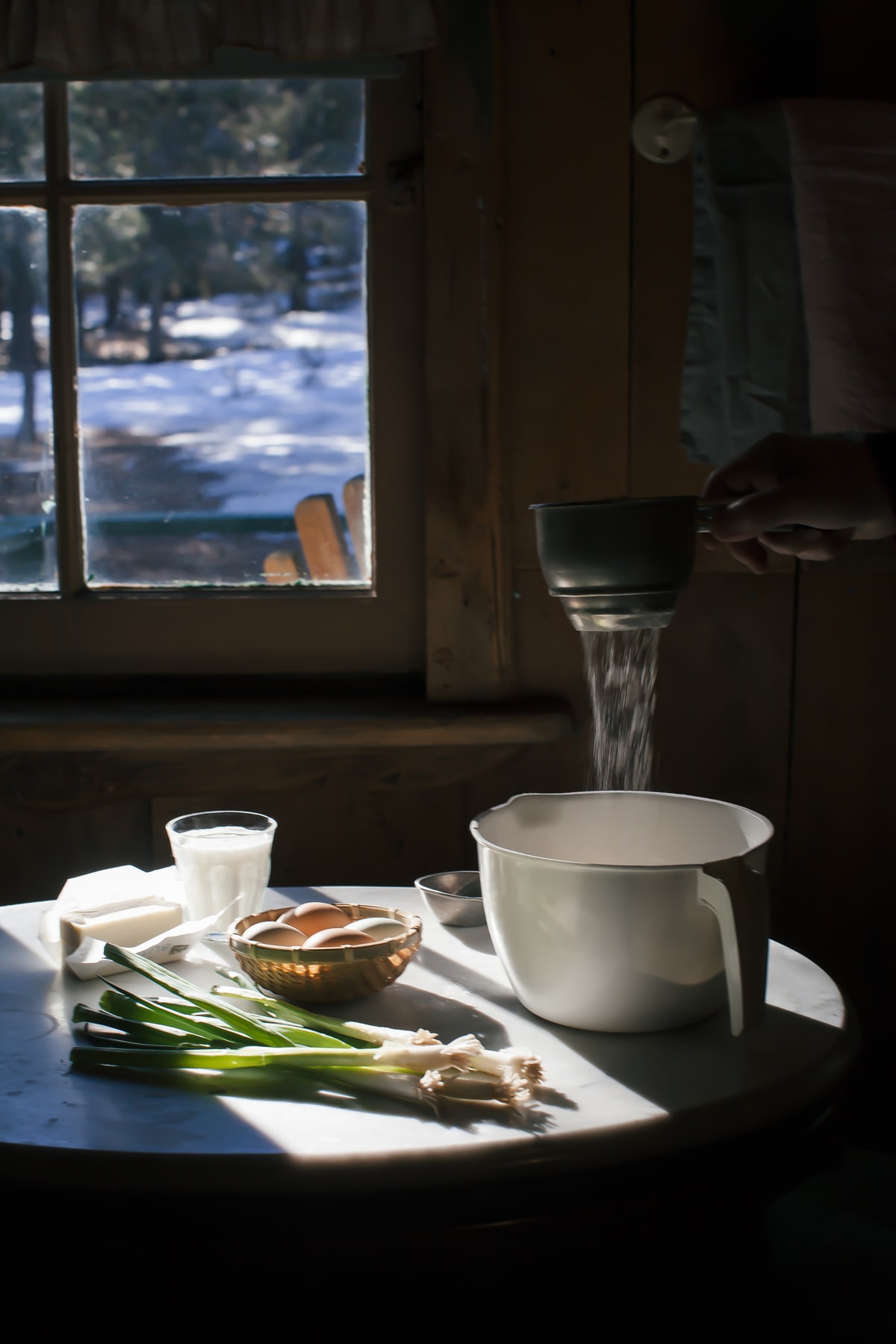 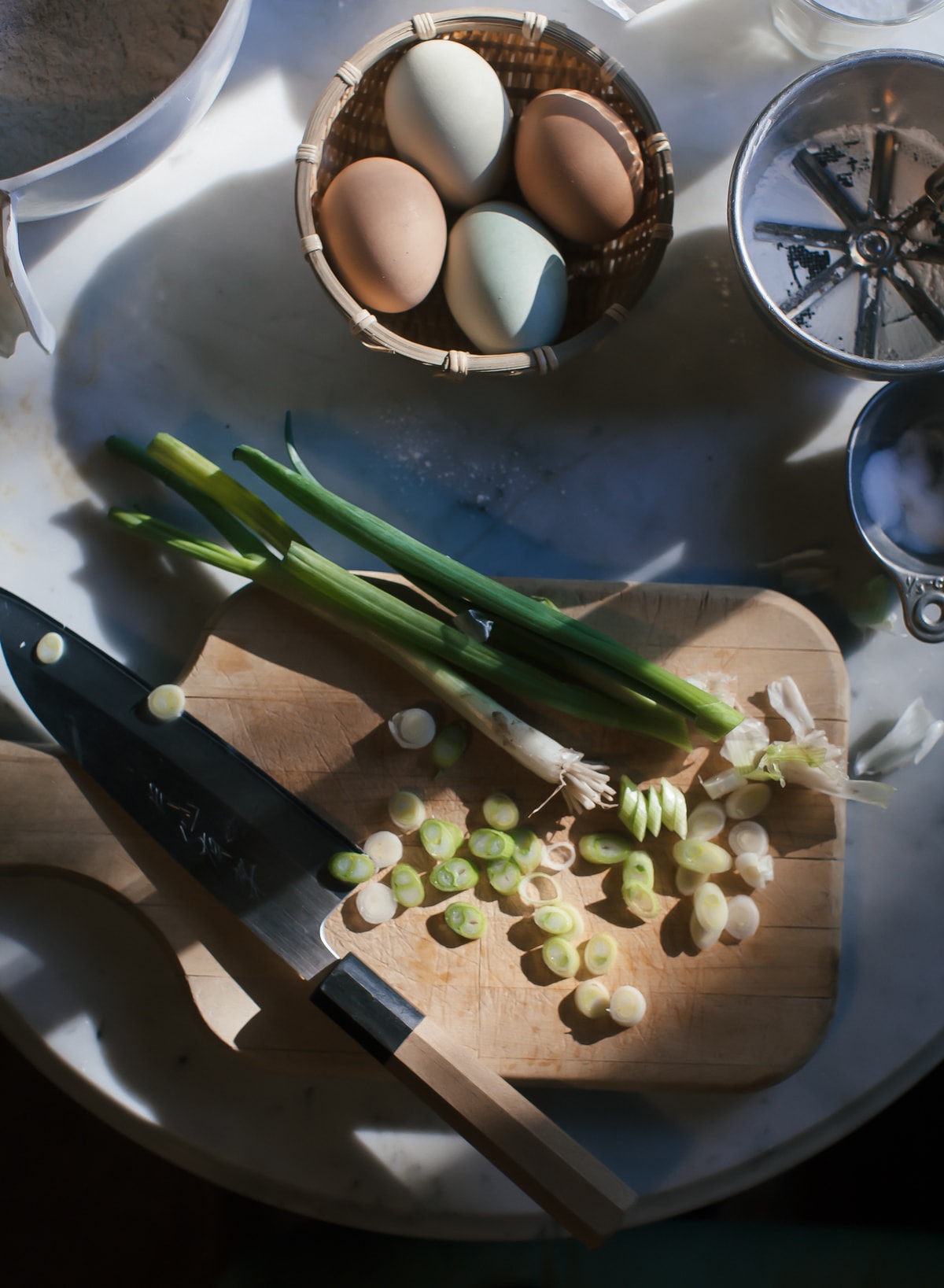 This actually was supposed to be scallion benne seed (sesame seed) biscuits but I forgot the sesame seeds at home. I actually forgot flour too but luckily the cabin came with a small bag.

I actually thought of hauling a bunch of my props and stuff to the cabin to make it feel more “me” but then I was just like whatever, it’ll be fine. And I’m glad I didn’t do that because I loved using what the kitchen had on hand. 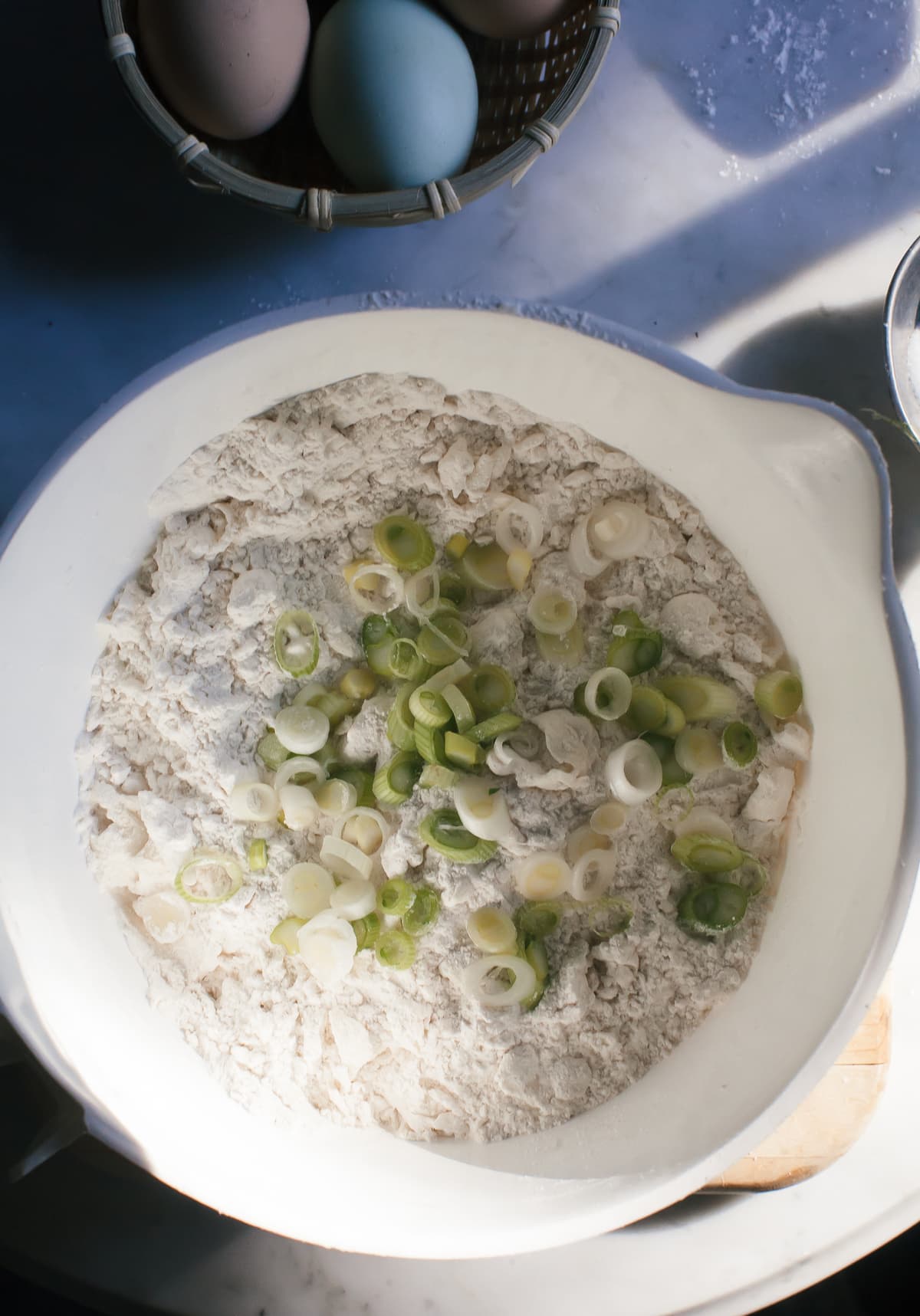 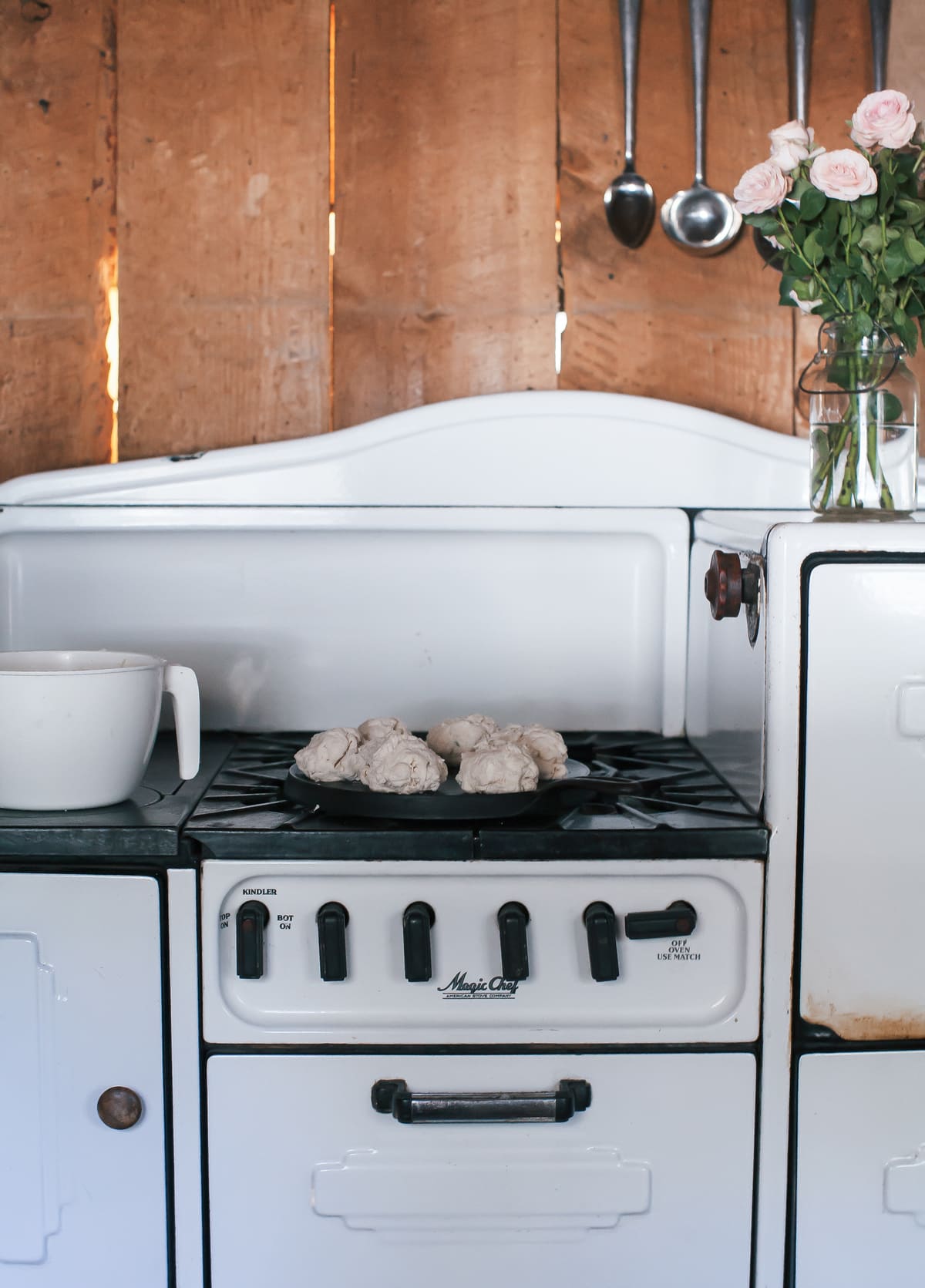 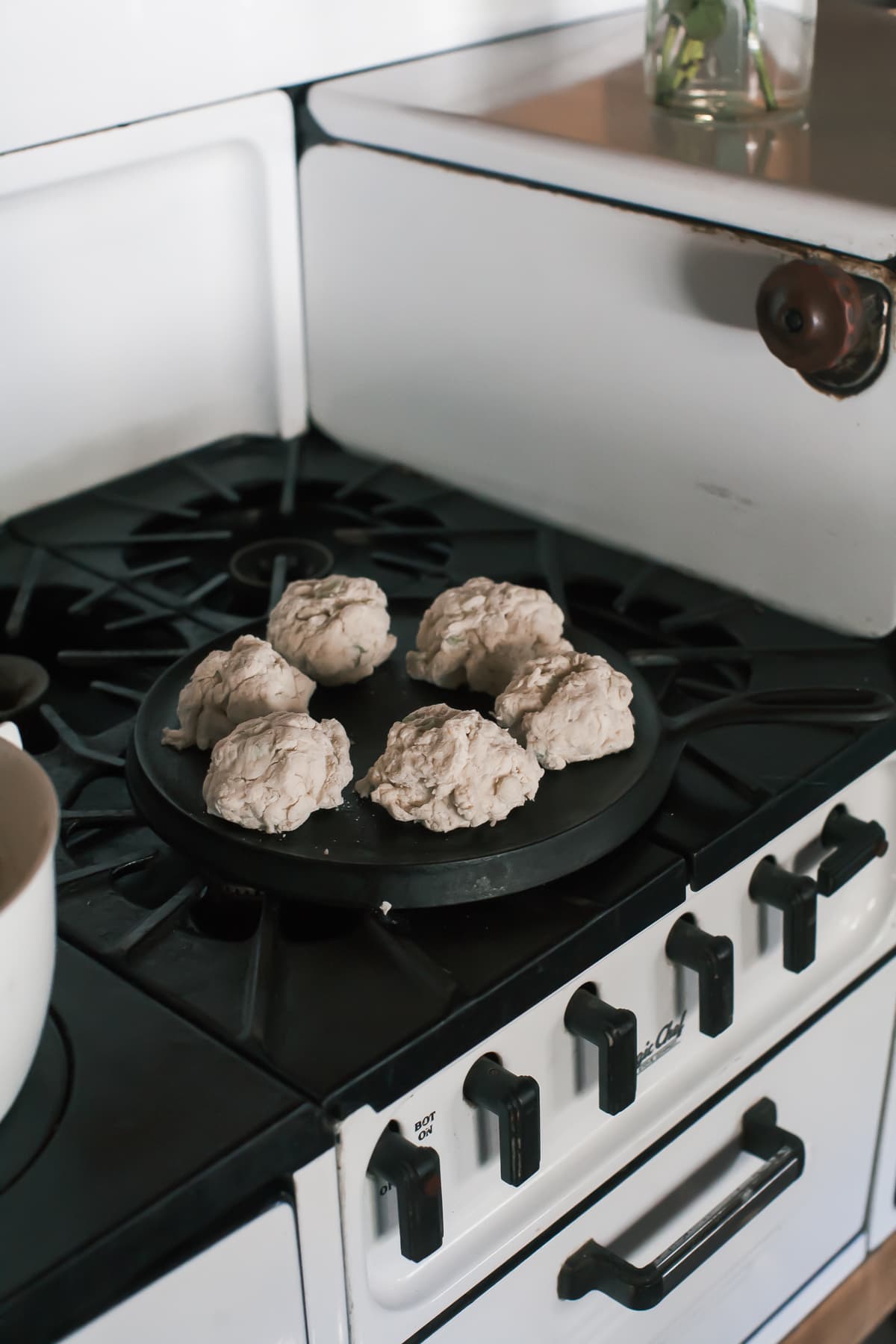 The eggs were a gift from the host who just took them out of her chicken coop where she had like 10 chickens hanging out in the snow.

Amelia met them and was terrified. 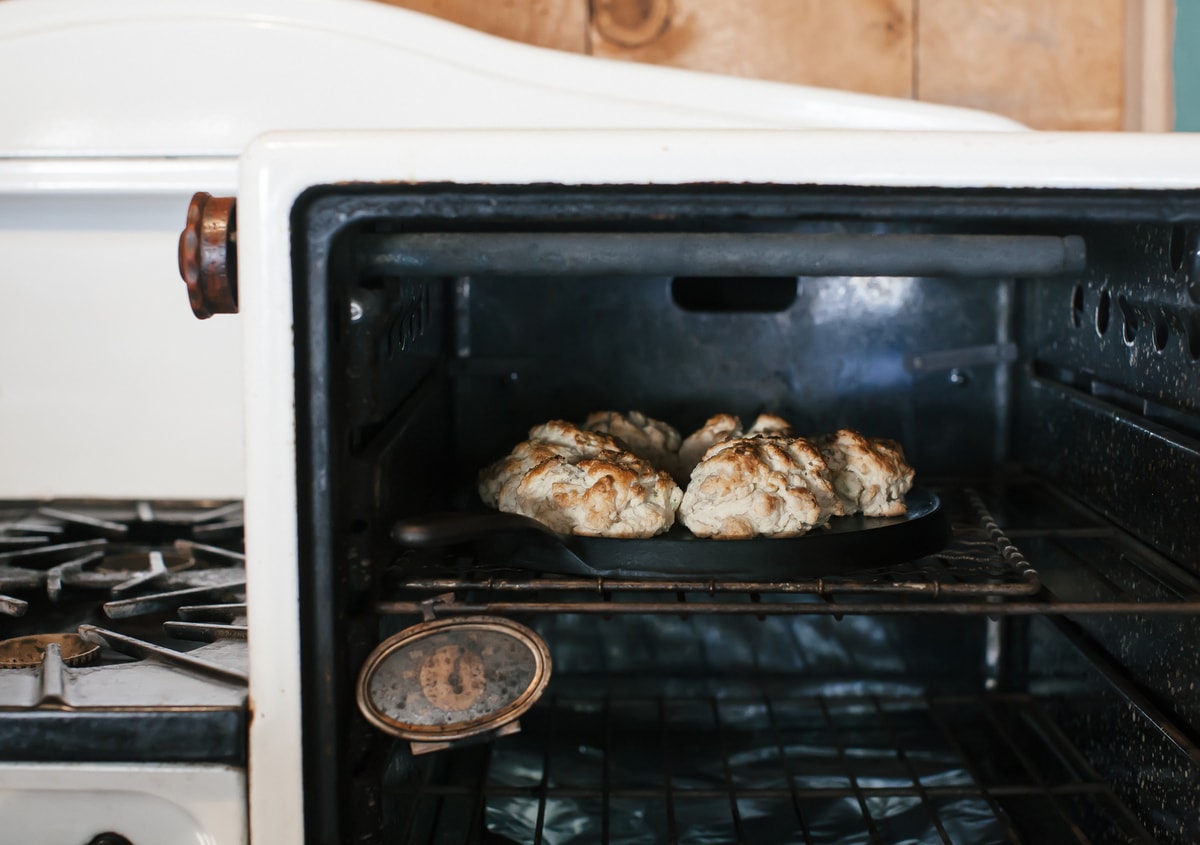 I made these biscuits in like an hour; the ease of drop biscuits always surprises me and is a constant reminder that they’re one of the best throw-together-breakfast things.

It was maybe the best two days in recent memories. We watched the entire Chelsea Handler special on Netflix, played Scrabble, took the sleds down the hill and I ran into a bunch of tree branches (luckily it wasn’t the tree trunk) while Amelia barked and ran after me (she was worried). 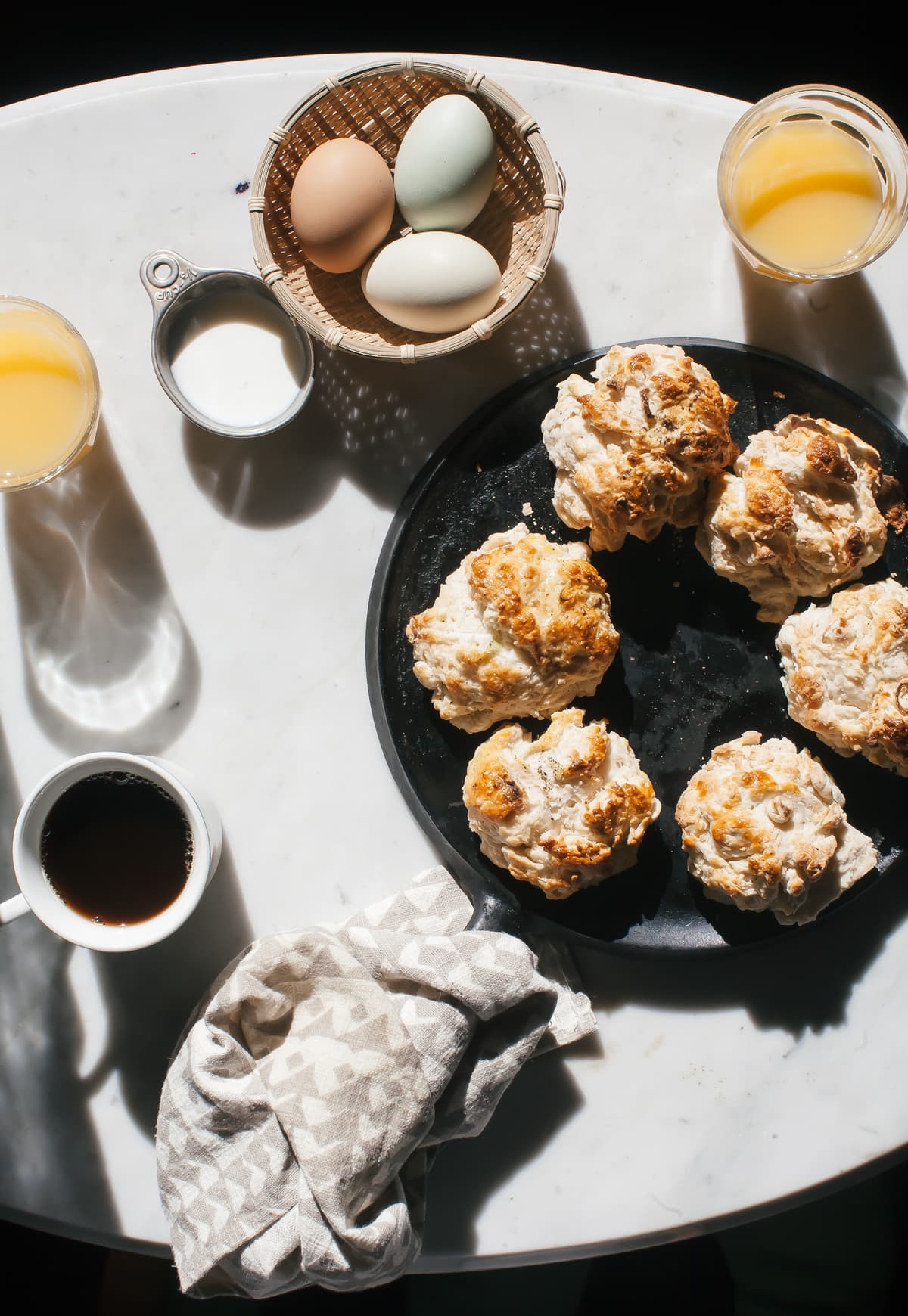