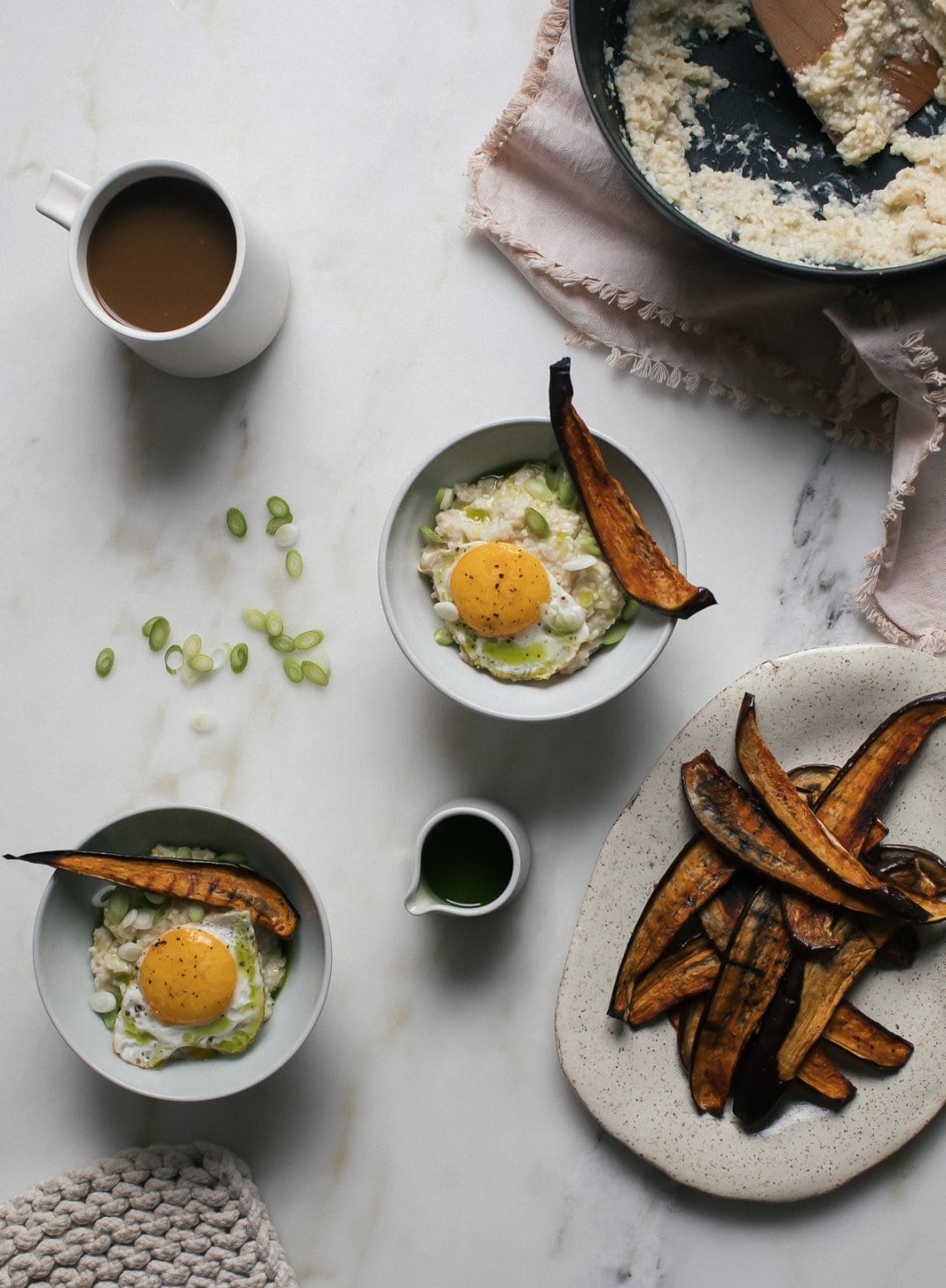 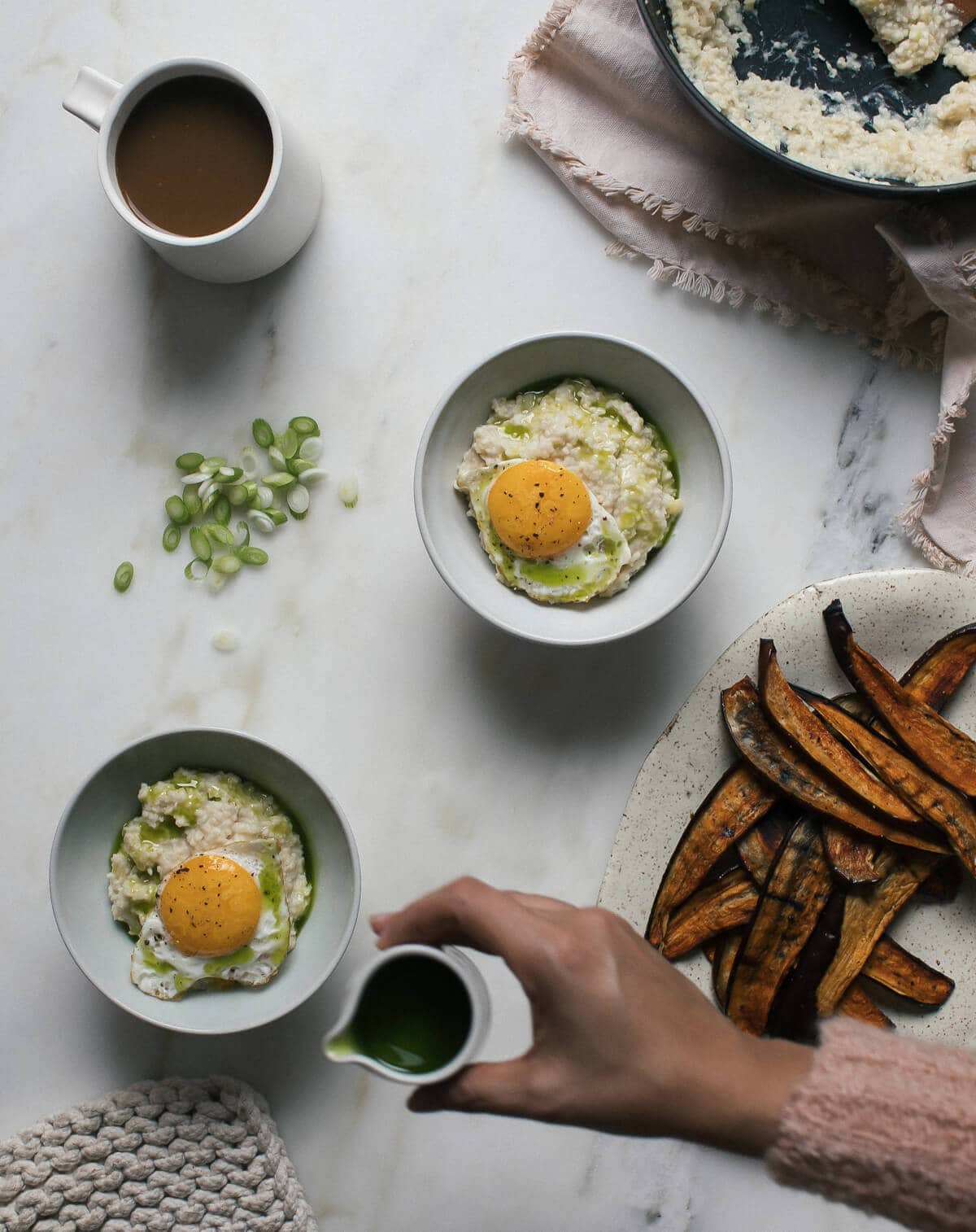 This past Monday it was rainy and stormy. I spent the entire day cooking in fluffy socks from two new vegan books and loved every single second of it!

The first up is a book, The First Mess. Every single thing she cooks I want to eat.

If you’ve followed this blog for a little while, you know that I am the furthest thing from a vegan human. I love cooking things in butter and ghee. I love dairy. I love cheese. But from time to time, I’ll steer clear of all of that, especially if things aren’t sold to me as such and they’re just presented to me as delicious and healthy-ish. 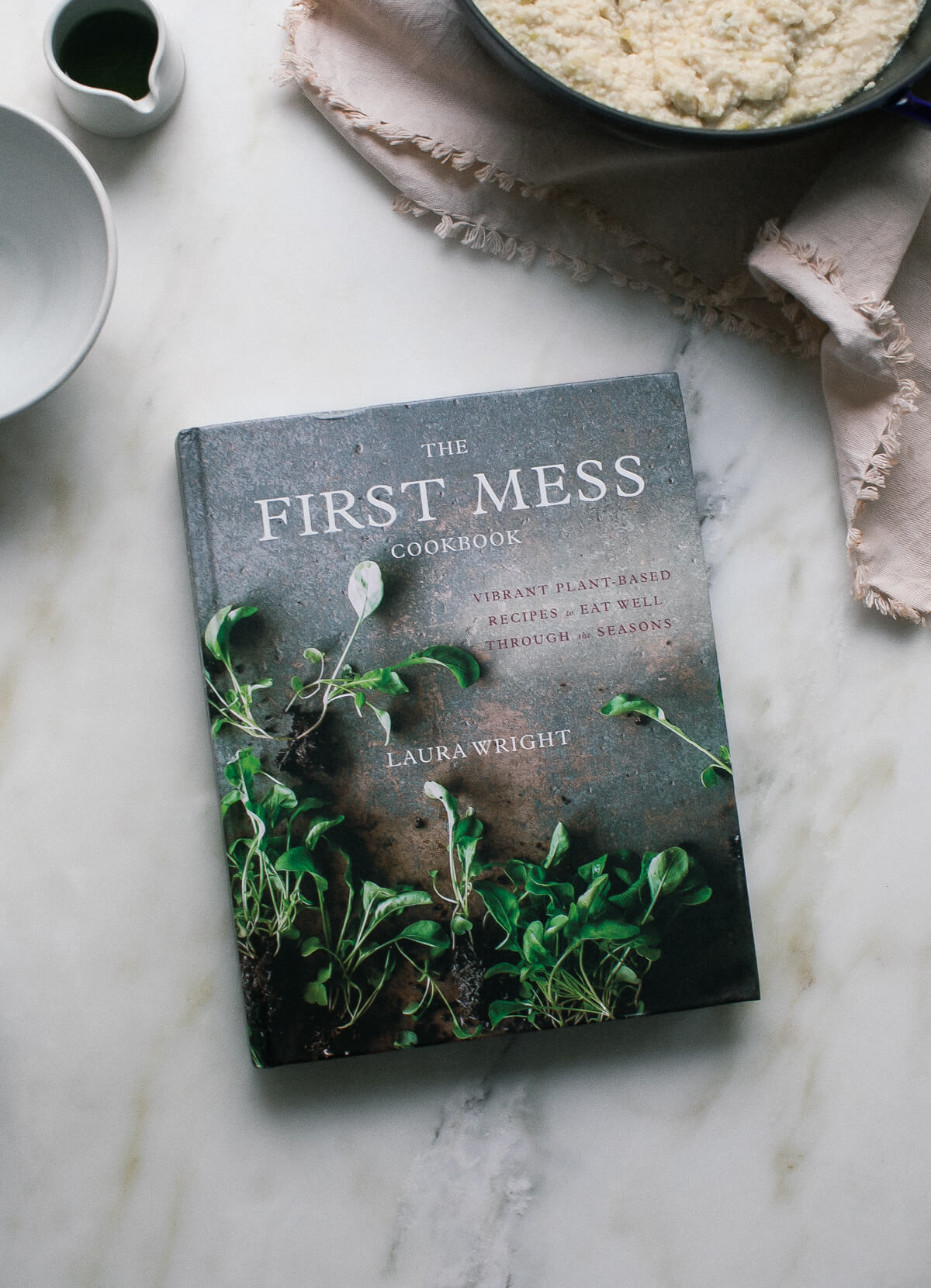 I feel like all of Laura’s food is that way. I like to think of it as food that just so happens to be vegan and healthy; it’s not forced. It’s food that naturally is vegan and doesn’t really feel or taste like health food. All of the recipes I’ve tried from her are done with ease and finesse. And my favorite part is that all of her food is cozy and comforting. 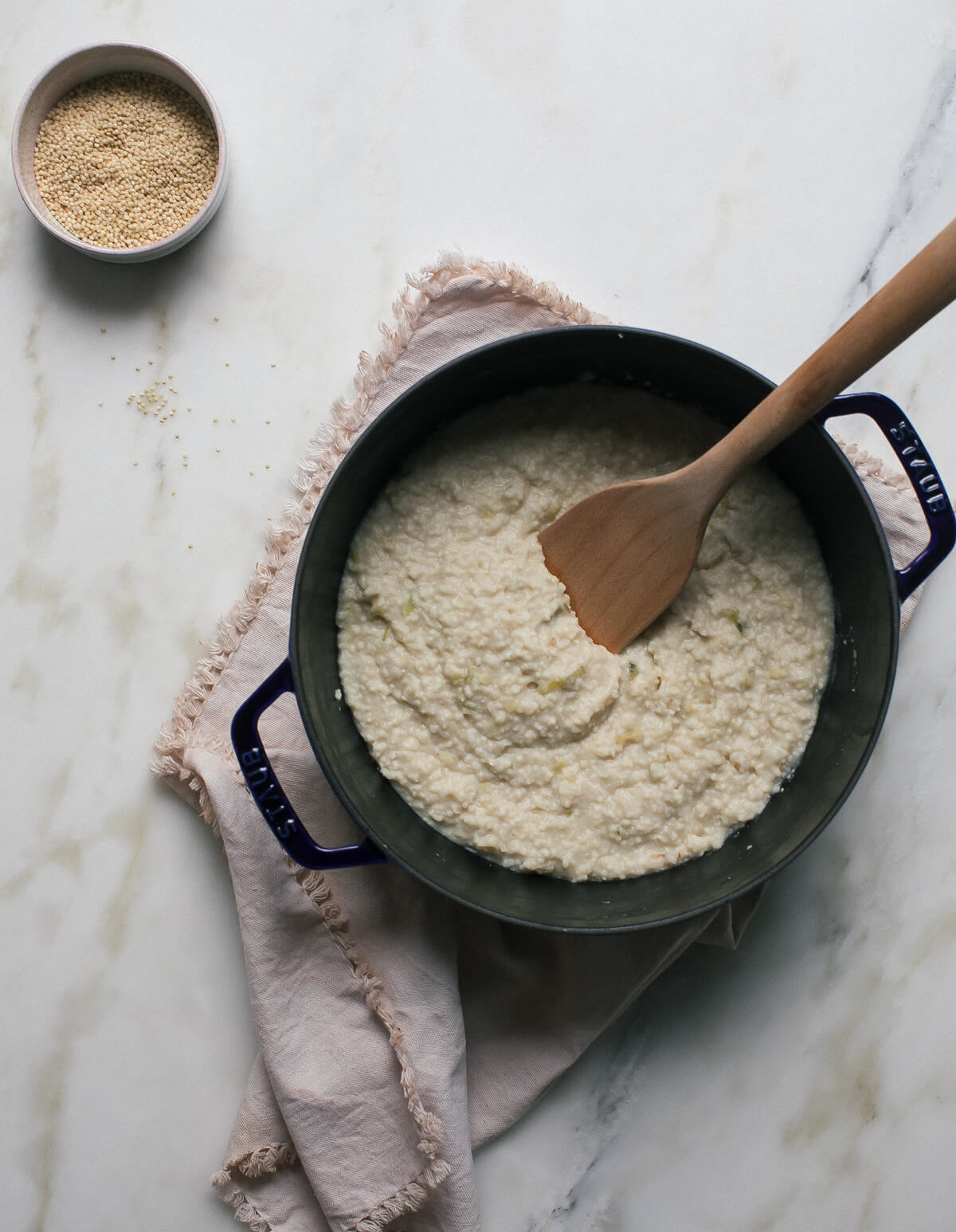 As I was flipping through the book, there were SO many dishes I wanted to try (and will try), but the one that intrigued me the absolute most was this millet “polenta.” It’s such a smart idea and one I hadn’t come across ever. You take millet (which I happened to have a ton of in my pantry), grind it up and make it into a “meal.”

It’s boiled the same way that polenta is and boom! Polenta! but without the corn and all that. (Remember when I found out I was sorta kinda allergic to corn?) 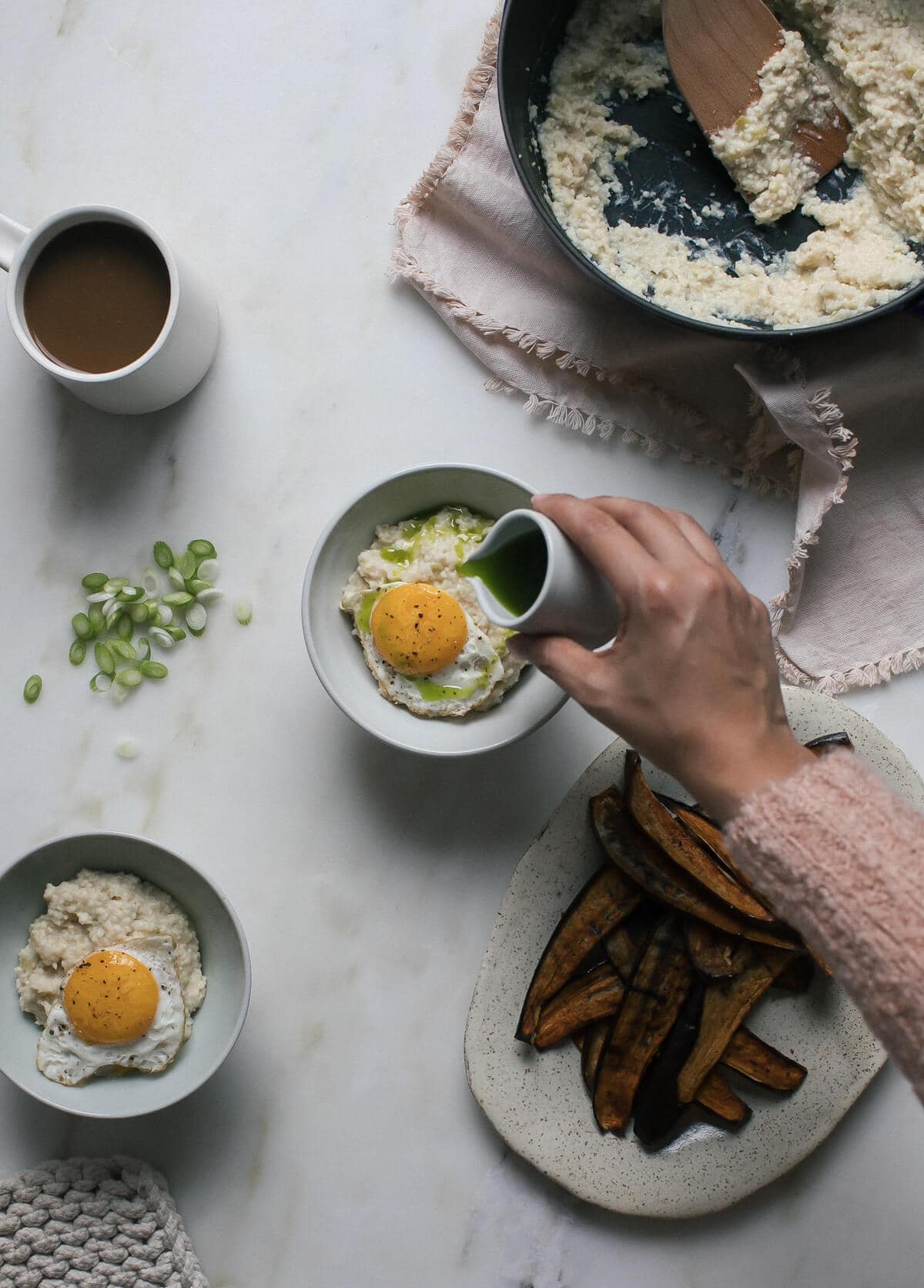 I paired it with some eggplant “bacon” from the book, which was also SO good. Eggplant already has sort of a “meaty” quality to it. Laura has you add a sauce that’s so full of flavor. Does it taste like bacon? No way! Bacon is bacon. But it is super delicious and flavorful and it’s a million times more healthy.

I served this as breakfast and since I’m not a real vegan human, I topped each bowl of millet polenta with a baby fried egg and ate it with a whole lot of milky coffee. 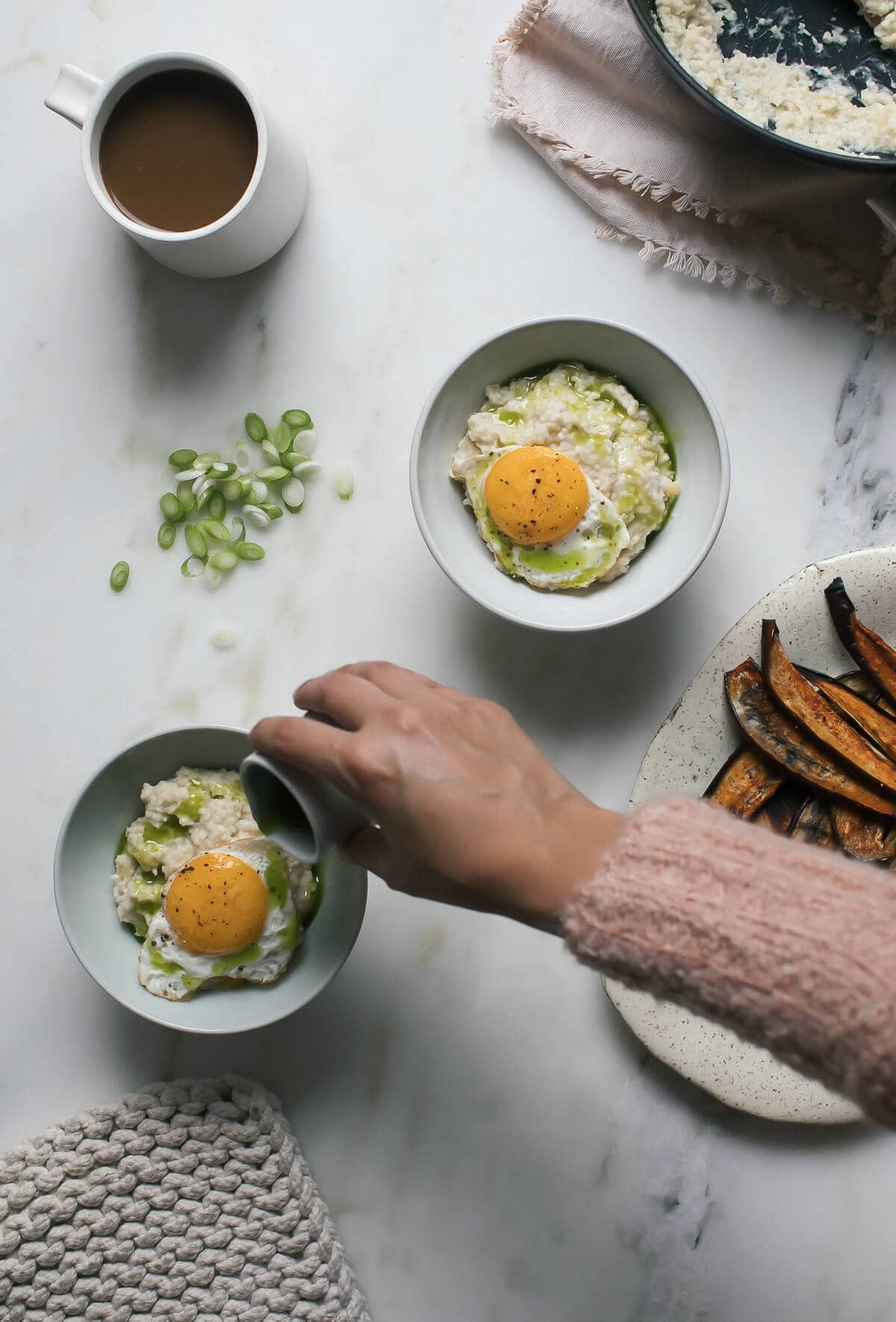 This tofu dish is what I’m making later this week. 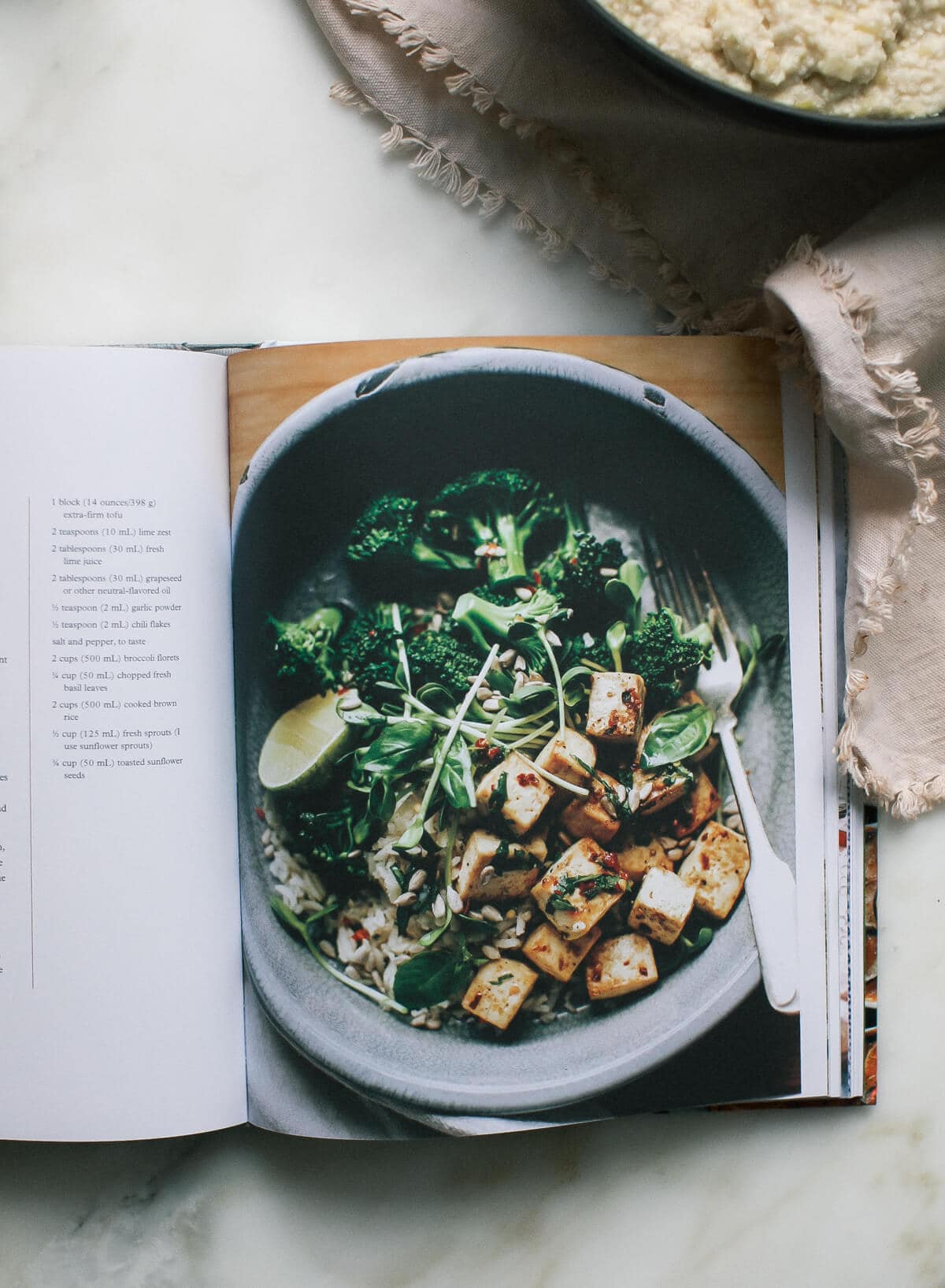 And this salad is all I want for lunch tomorrow and the next day! 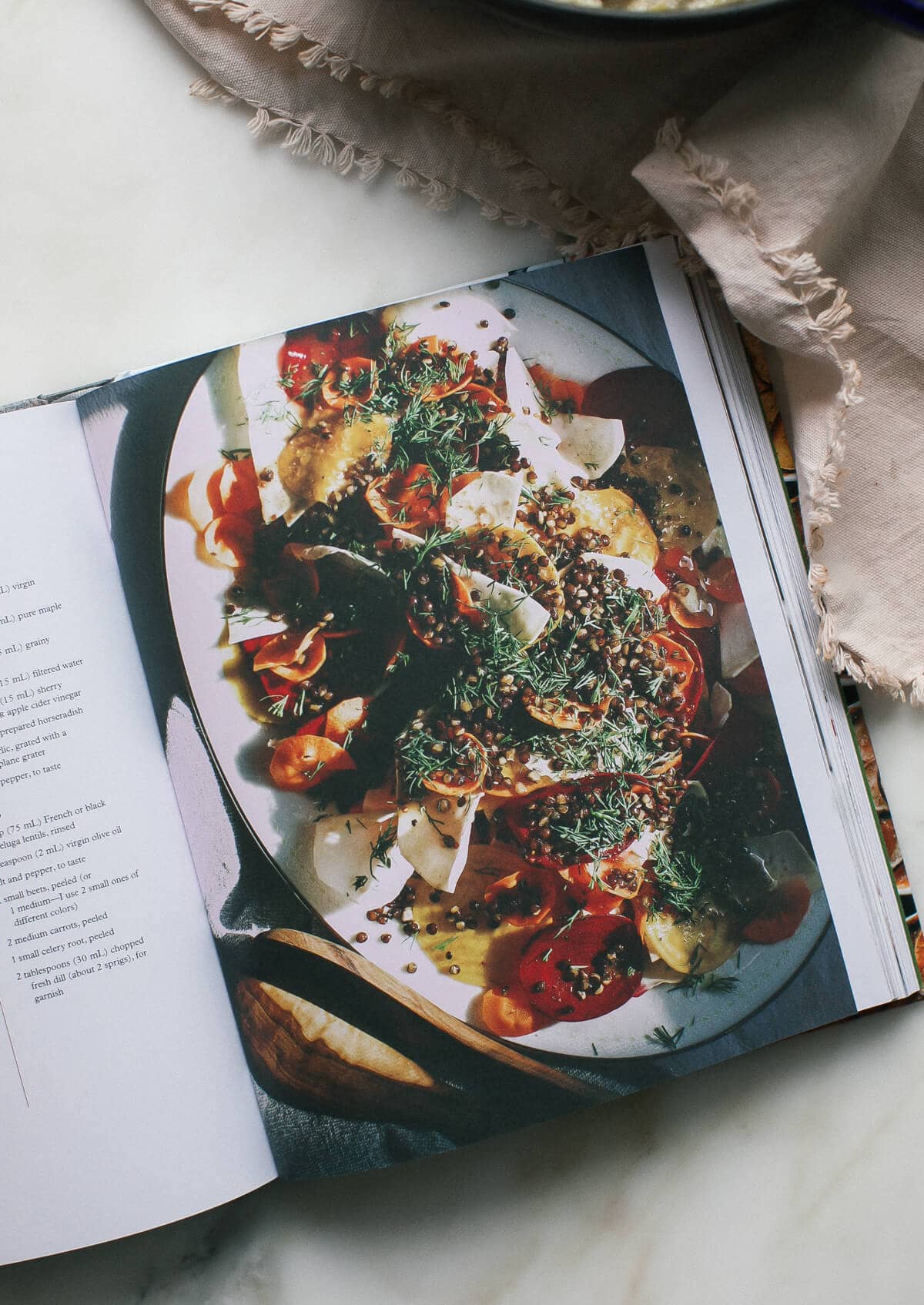 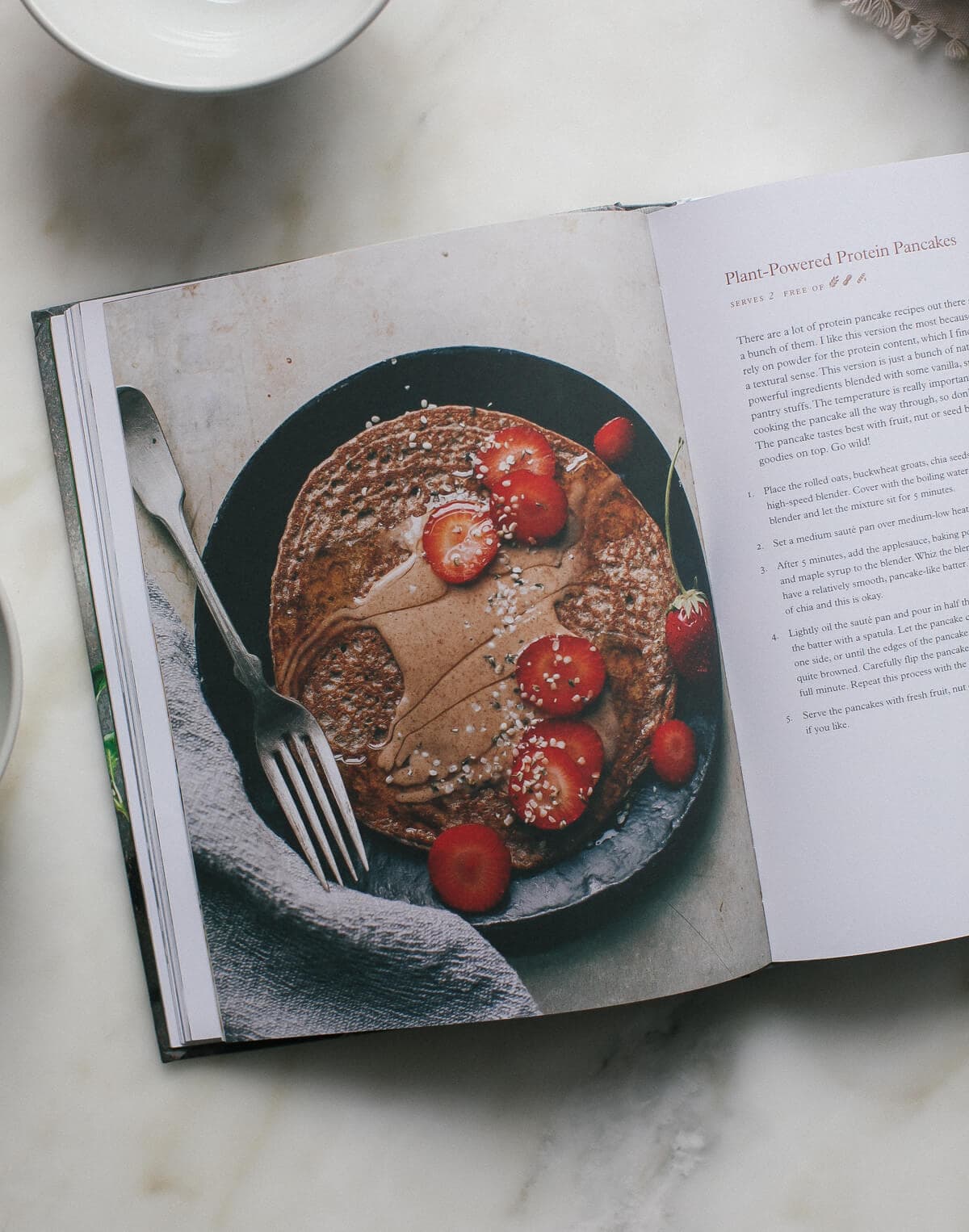 I feel like her food is the food I should be eating at the end of a long day, especially when my days have consisted of cakes and pies and indulgent things I have to try and taste-test.

Here’s a link to her book and blog! 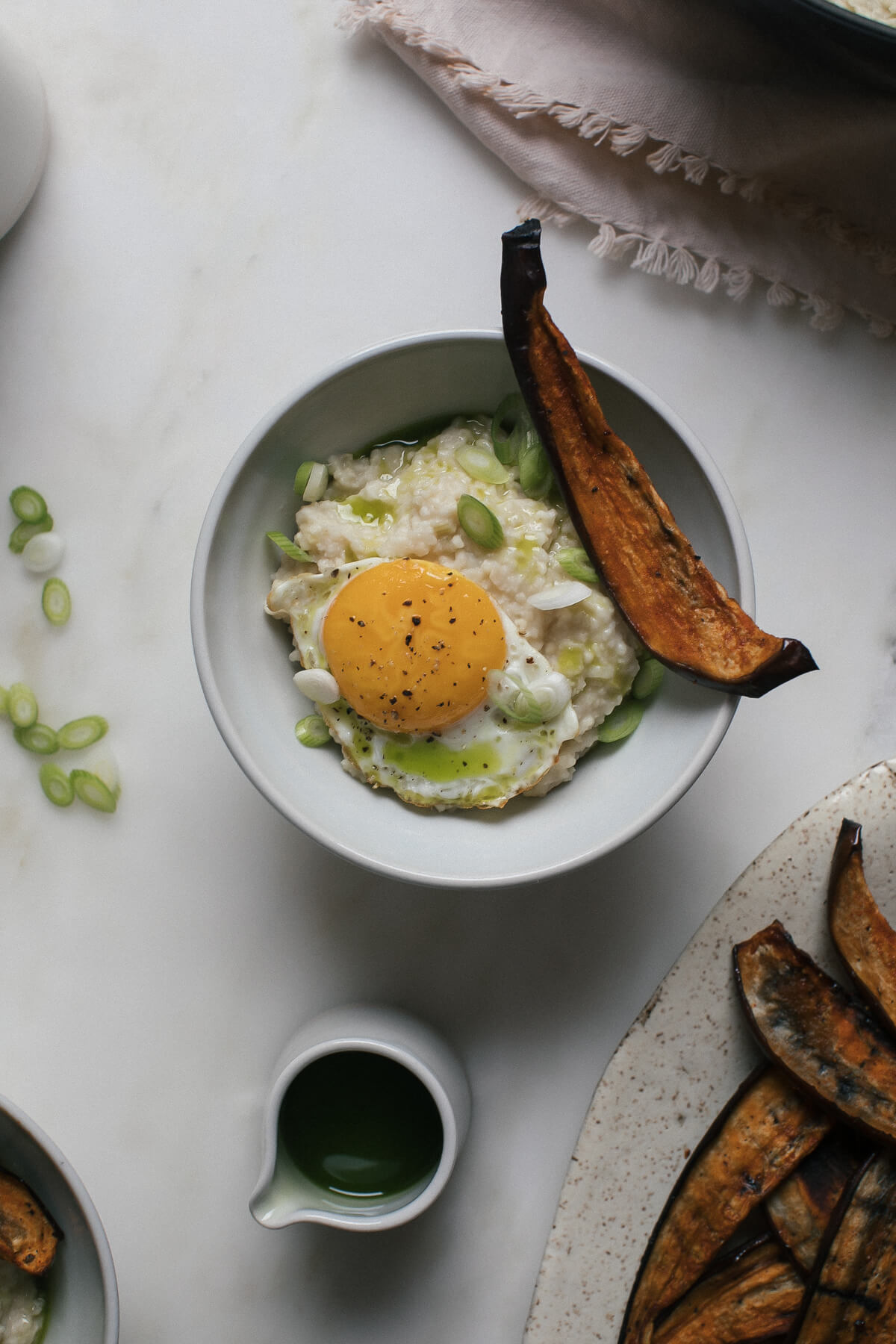 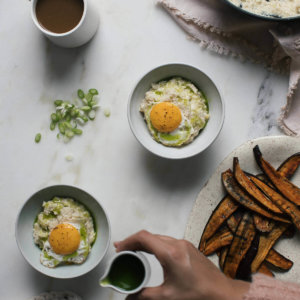 To Make the Eggplant Bacon:

To Make the Green Onion Oil:

To make the Millet Polenta: 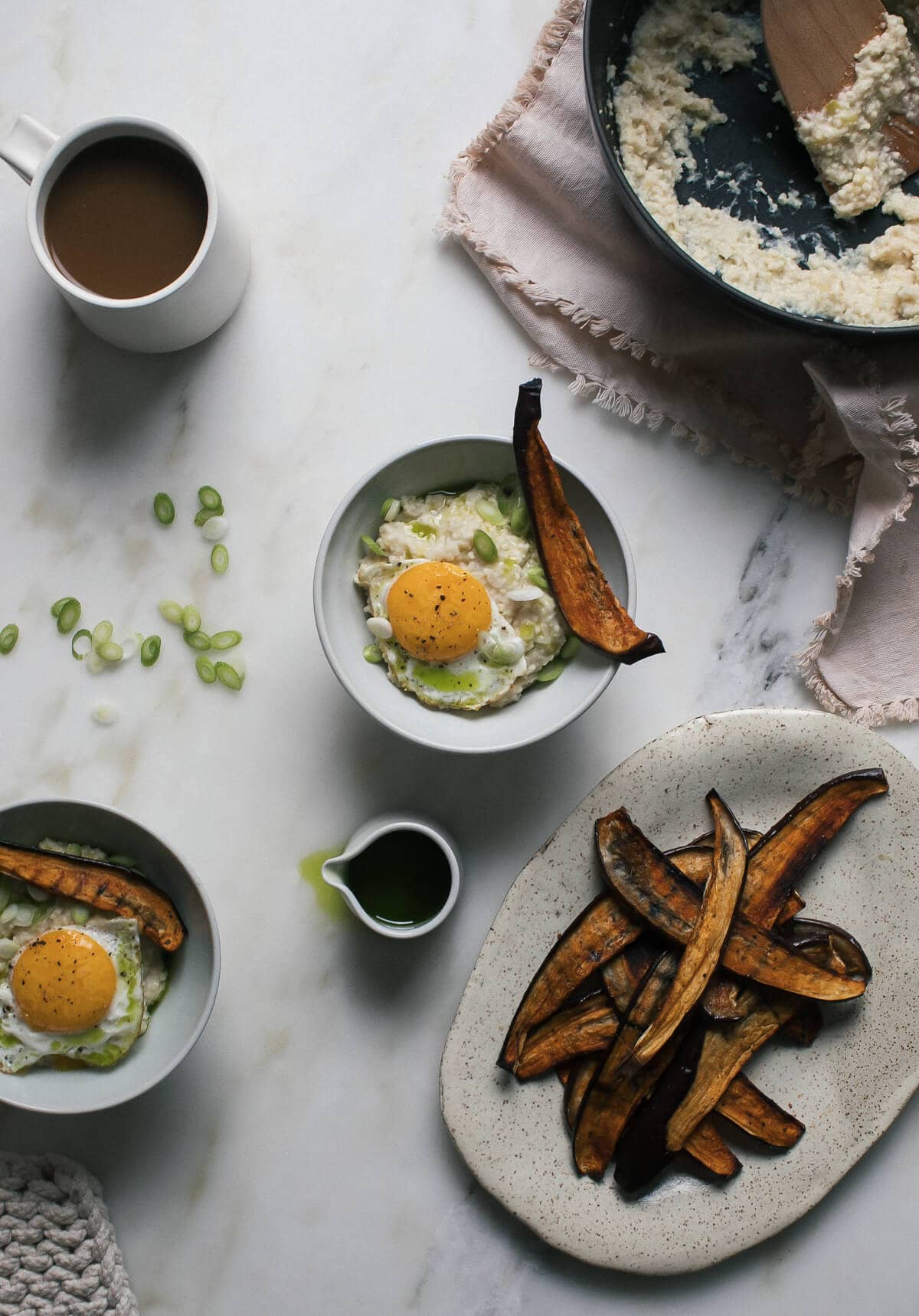 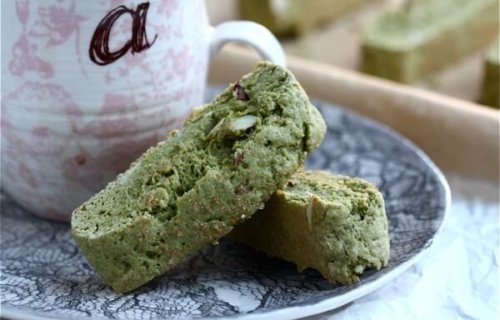 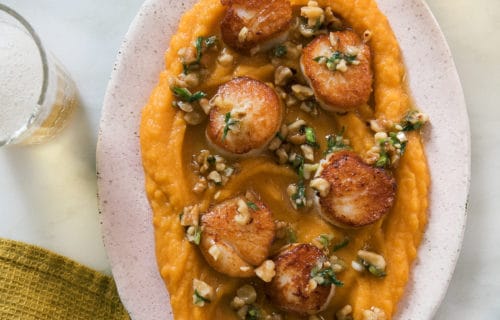 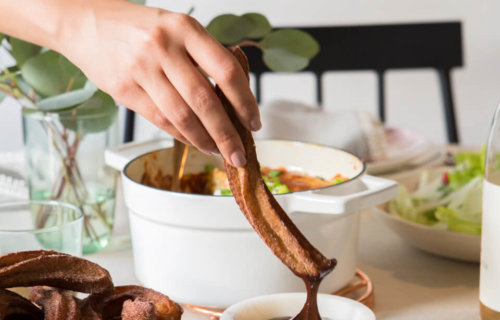