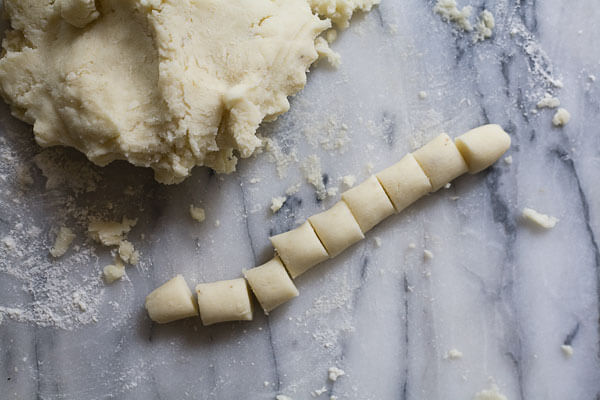 Growing up I had an obsession with gangster movies. It started when I was like ten years old and my film buff of an uncle showed me Reservoir Dogs. When my parents picked me up from his house later that day and I started telling them my favorite lines from the too-grown-up-for-me movie I had just seen, they knew he had corrupted me. My parents were pretty bummed that I now wanted to trade in my Disney princesses for mob dudes, but I’m happy they let me watch all the shoot-’em-up movies I wanted. It made me a more well rounded child, I think.

So, When I used to think of gnocchi, my brain would first think of The Godfather 3, which, by the way, never see. Truly awful. It was the world’s first introduction to Sofia Coppola. She was sitting on a table in a velvet black dress, looking drop dead gorgeous, rolling gnocchi. While the movie was a total bust and super sad because it could’ve been good, the gnocchi scene is still one of my favorite food scenes.

If you’ve ever made gnocchi, it’s hardly diffcult, but much like pupusas, it’s very touch and feel. And I do think making it for the first time might be a little intimidating, so I figured doing a little how to on making gnocchi might be helpful.