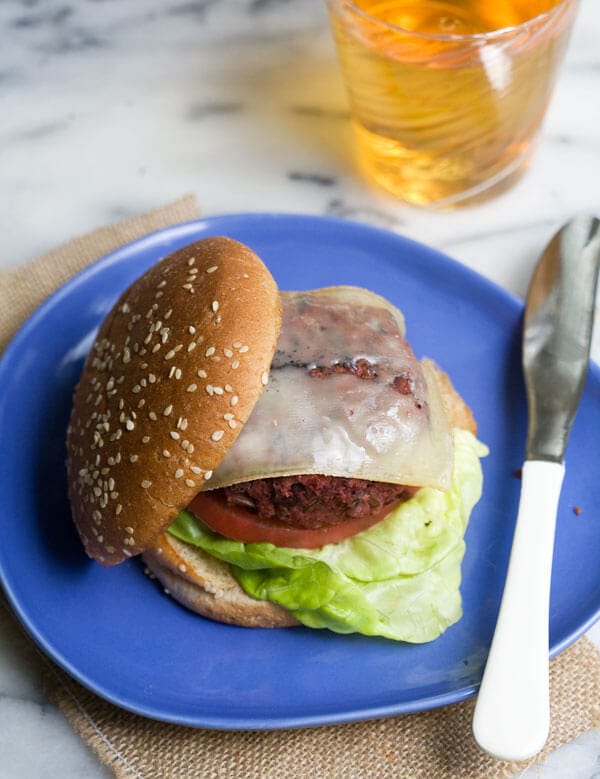 Ugh. What a cocky recipe title. But I’m serious. This trust is the best veggie burger recipe! I have sort of an attitude about veggie burgers because most restaurants don’t treat veggie burgers with the proper respect they deserve. They’re generally just some sad afterthought, a requirement for burger establishments so vegetarians don’t starve to death while at their restaurant. Can you tell I’m passionate about the subject?

As a meat-eater, I eat veggie burgers all the time because I love them. I would never say that a veggie burger is necessarily better than a meaty, bacon-loaded burger with melty cheese on top, but I would say they’re just different – you can’t really compare the two. I don’t always want that kind of burger; sometimes I want to go lighter, fresher but still want to feel full. 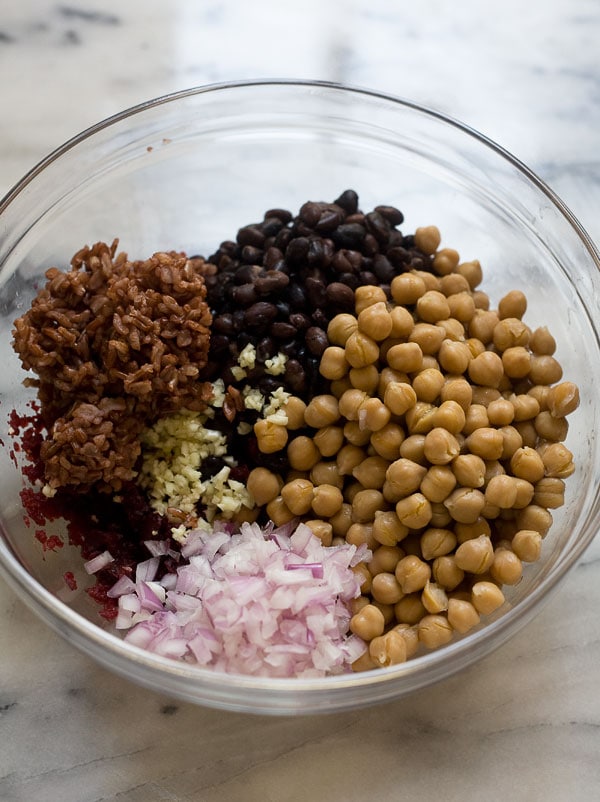 The Mix Is Important!

These veggie burgers are a mix of garbanzo beans, black beans, beets (!!), heirloom pink rice (can we talk about my love affair with fancy rice?), a bunch of spices and some red onion. They’re vegan, too! No egg to hold them together – the coldness from the fridge helps bind them. It’s vegan science. You can actually keep the mixture in the fridge for up to three days. You’re welcome to make it ahead and then assemble them when you want to cook them up!

Since I’m not a vegan, I love adding cheese to every burger ever, meat or no meat. Obviously this 100% optional AND there are a lot of really good vegan cheeses out there now that have zero palm oil and actually melt. They’re magical! I would head to your local health food store and seek out one that’s perfect for this veggie burger.

I love these things so much. I hope you get a chance to make: The Best Veggie Burger Recipe . Get at it! 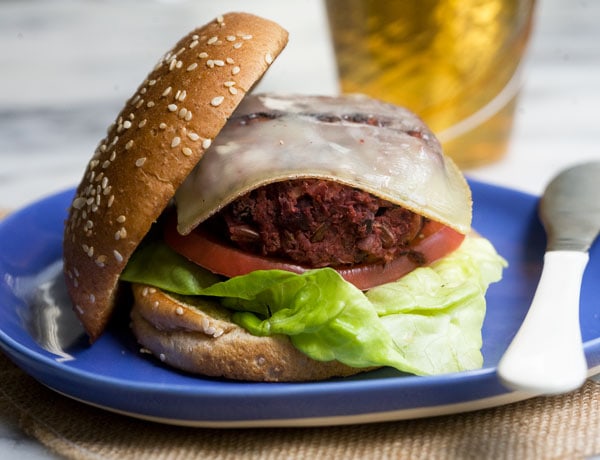 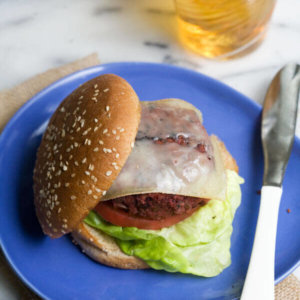 To make the patties:

*Many grocery stores sell roasted beets. If you’d like to roast them yourself, here’s how: Preheat the oven to 400? Fahrenheit. Trim the beets. Place them in a casserole dish, add a splash of water, cover with foil and roast for 30-45 minutes, until beets are tender when scored with a fork. Allow to cool to room temperature, then peel. **You can buy oat flour, or you can make it at home. To make oat flour, add 1/4 cup of rolled oats to the jar of a food processor. Pulse until the mixture is very fine. Measure out 1/4 cup (you may end up with a few tablespoons more) and proceed with the recipe.
CourseDinner
CuisineAmerican, Vegan, Vegetarian
Keywordbest veggie burger, plant based burger, vegan burger, vegan veggie burger, vegetarian burger, veggie burger
Serving: 4g | Calories: 276kcal
Did you make this Recipe? Tag me Today!Tag @acozykitchen on Instagram and hashtag it #acozykitchen
August 2, 2013 by Adrianna Adarme