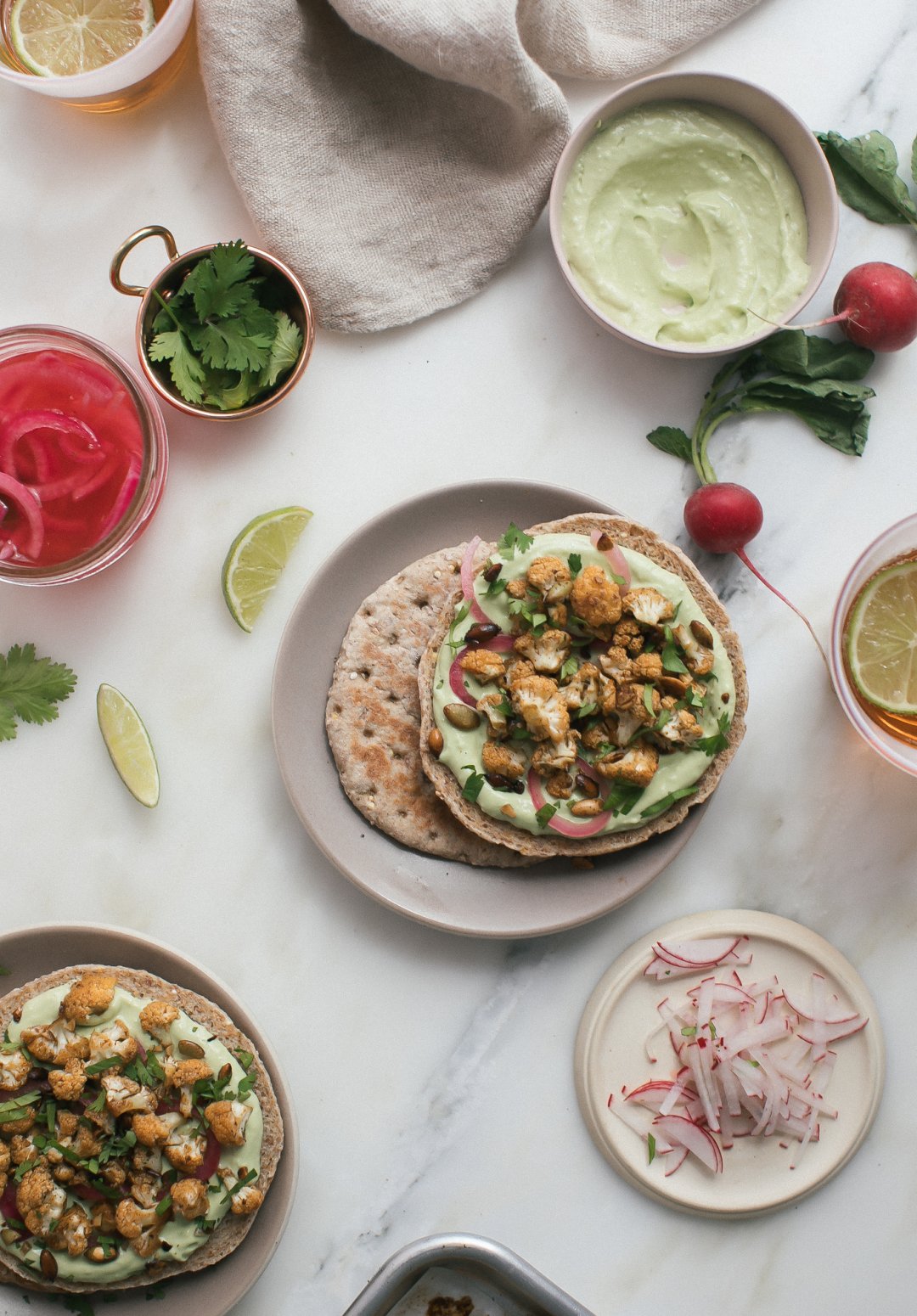 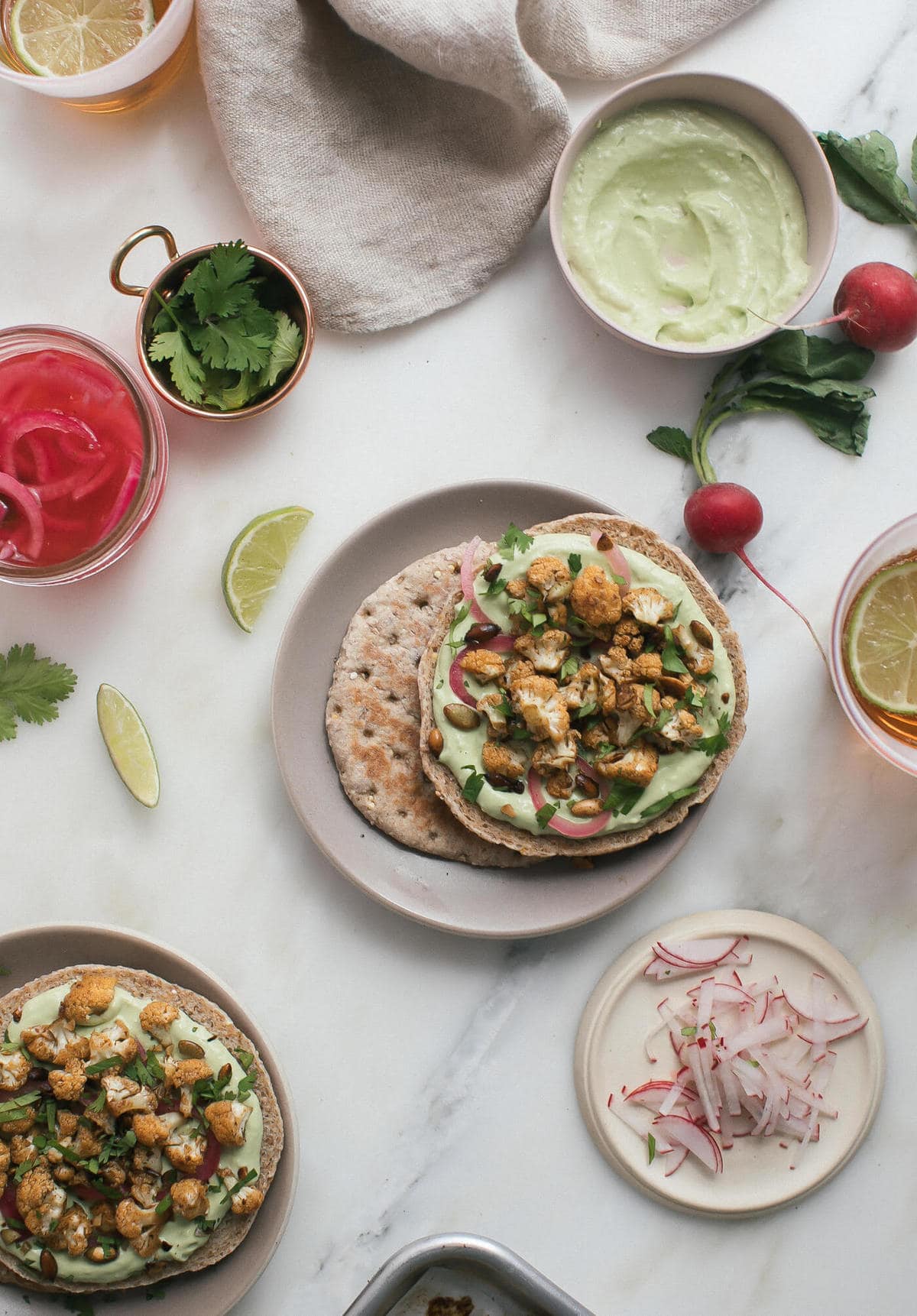 Why didn’t you guys tell me I’ve been making nothing but pink food lately?! Good gracious, I looked at the first page of this blog the other day and was GIRL, get it together. Consider this dish/post a big gigantic break from all things strawberries/rhubarb/raspberries, etc. Woohoo!

When I went to college, my roommate was this Dominican girl from Queens named Kim. She cooked the best chicken; it was her mom’s chicken. I remember she offered me a plate and I almost passed out it was so good. Whenever she would cook, I would always make sure to linger around so she’d offer me some and she always did because she was the best. 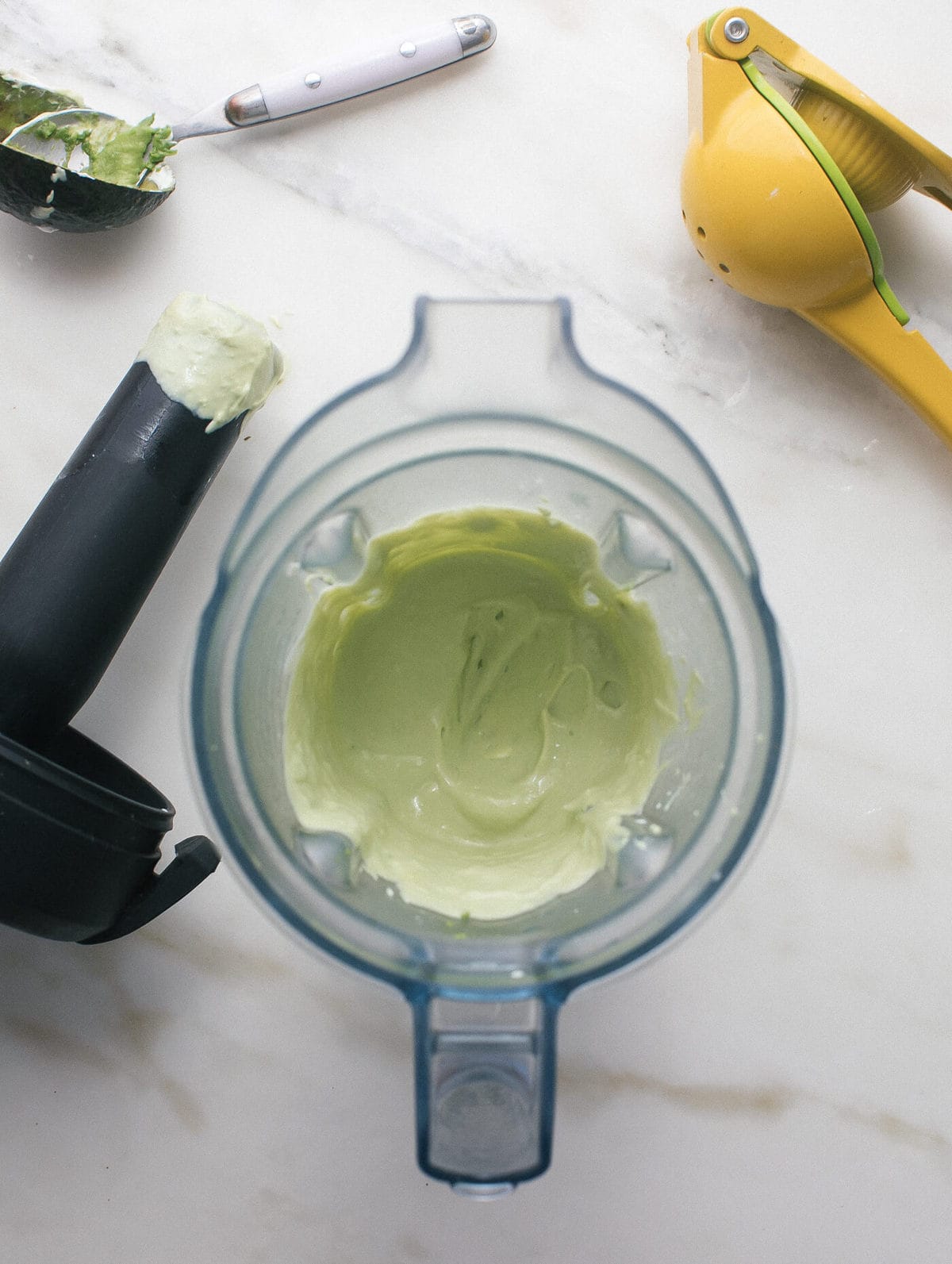 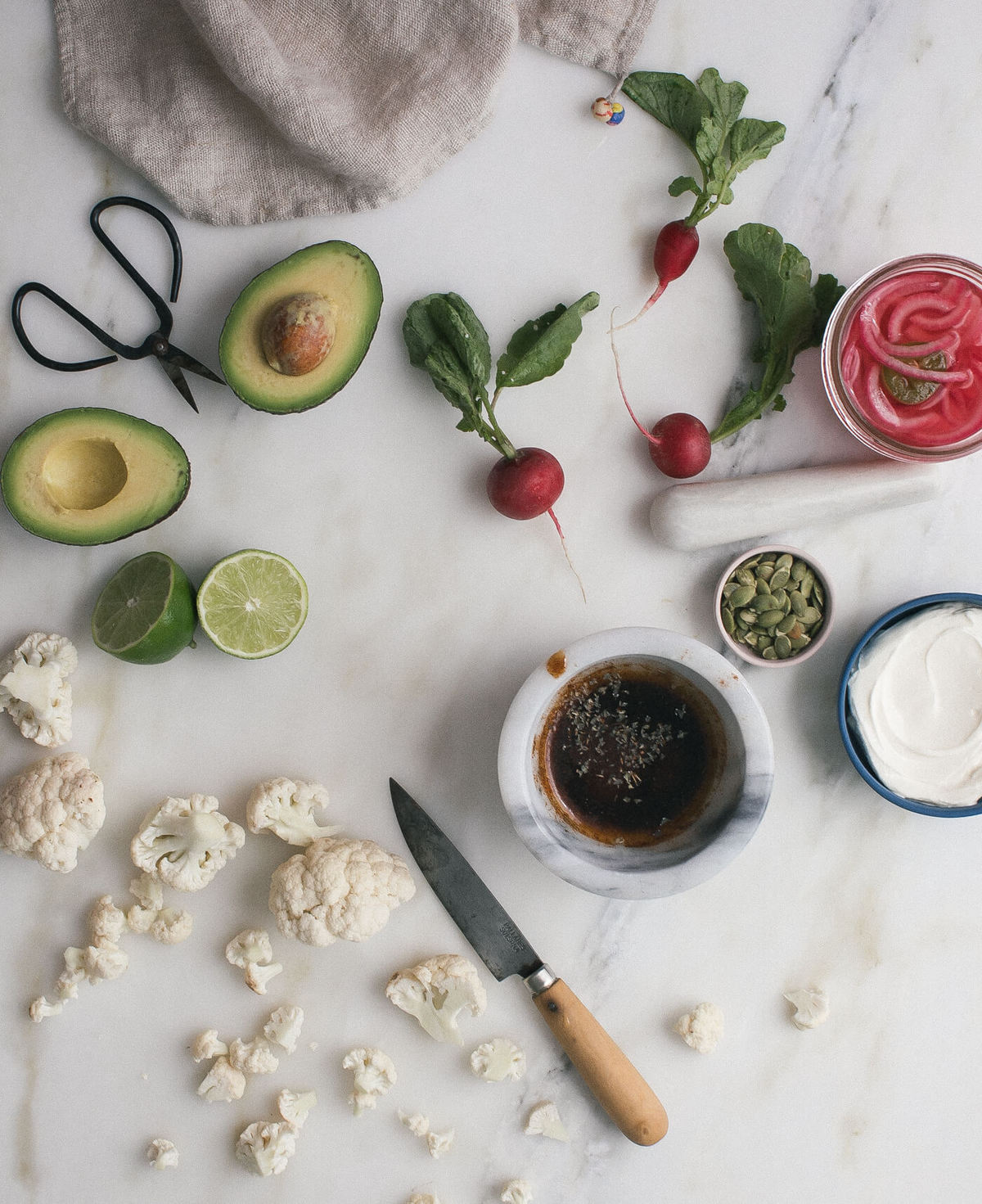 When I finally asked her why it was so good she told me the spices. The one thing she said her mom always told her was to add A LOT of spice to everything.

And I’ll never forget that because my mom cooked with lots of spices too. I also remember thinking oh I guess that what us Latinas do—we cook lots of spices. Ok!

For this recipe, I teamed up with Ozery Bakery and their delicious bread. My favorite part about them is that I keep them in the freezer so I don’t feel the need to eat all of the bread within a few days (because I will). 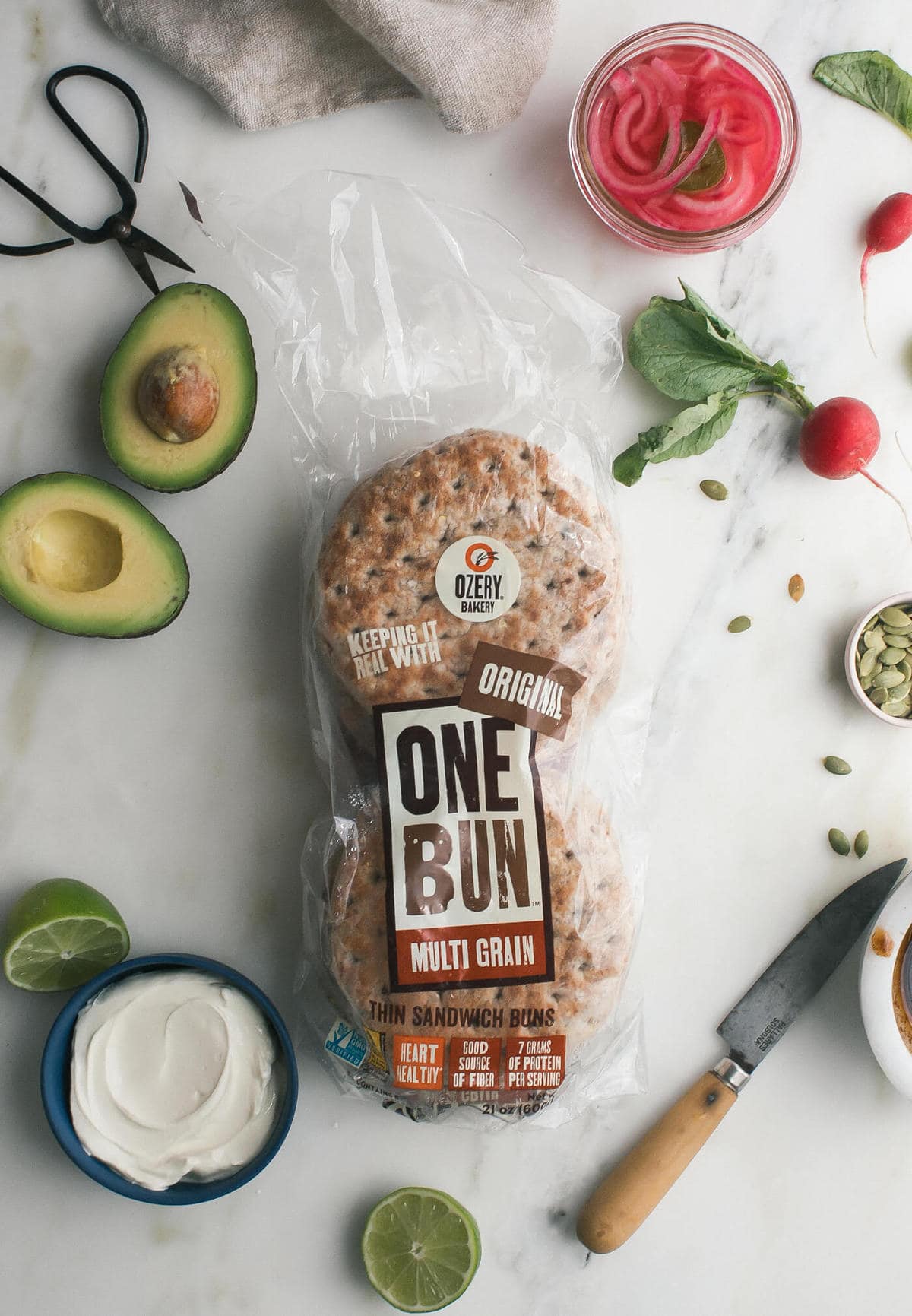 Whenever I want one, I just remove it from the freezer and warm it up. And the bread is SO soft. I like to think of it almost like as soft as a hamburger bun but half the thickness which is great for this type of arrangement. Also the ingredient list is great—nothing scary and all non-GMO.

They have a bunch of different types of breads but for this recipe, I chose the OneBun Multi-Grain.

The recipe starts with a spice oil mixture all mixed together. There is ancho chile powder, which is an all-time favorite spice of mine because it has a rich nuttiness (and subtle spiciness), cumin, salt, cayenne and dried Mexican oregano. 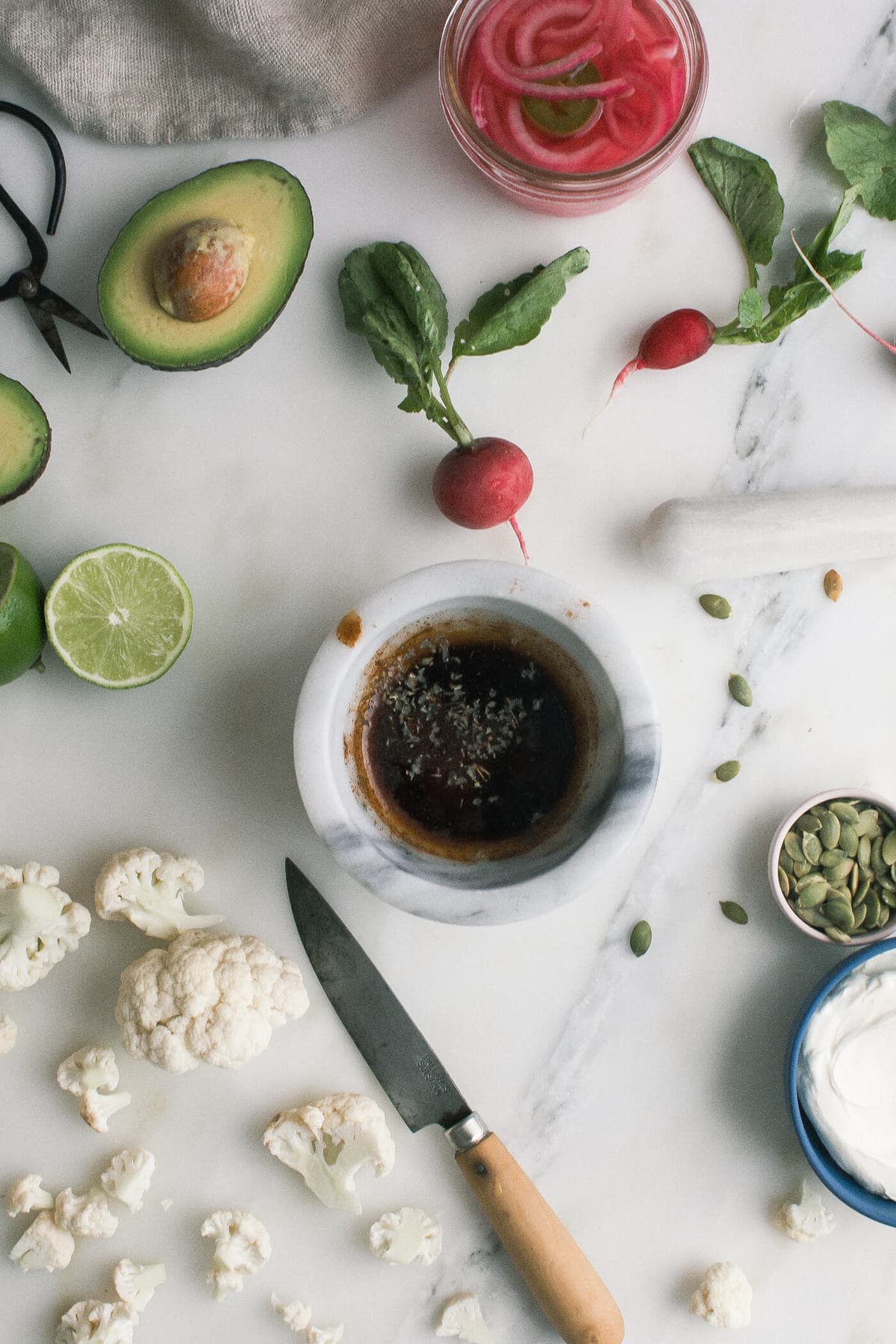 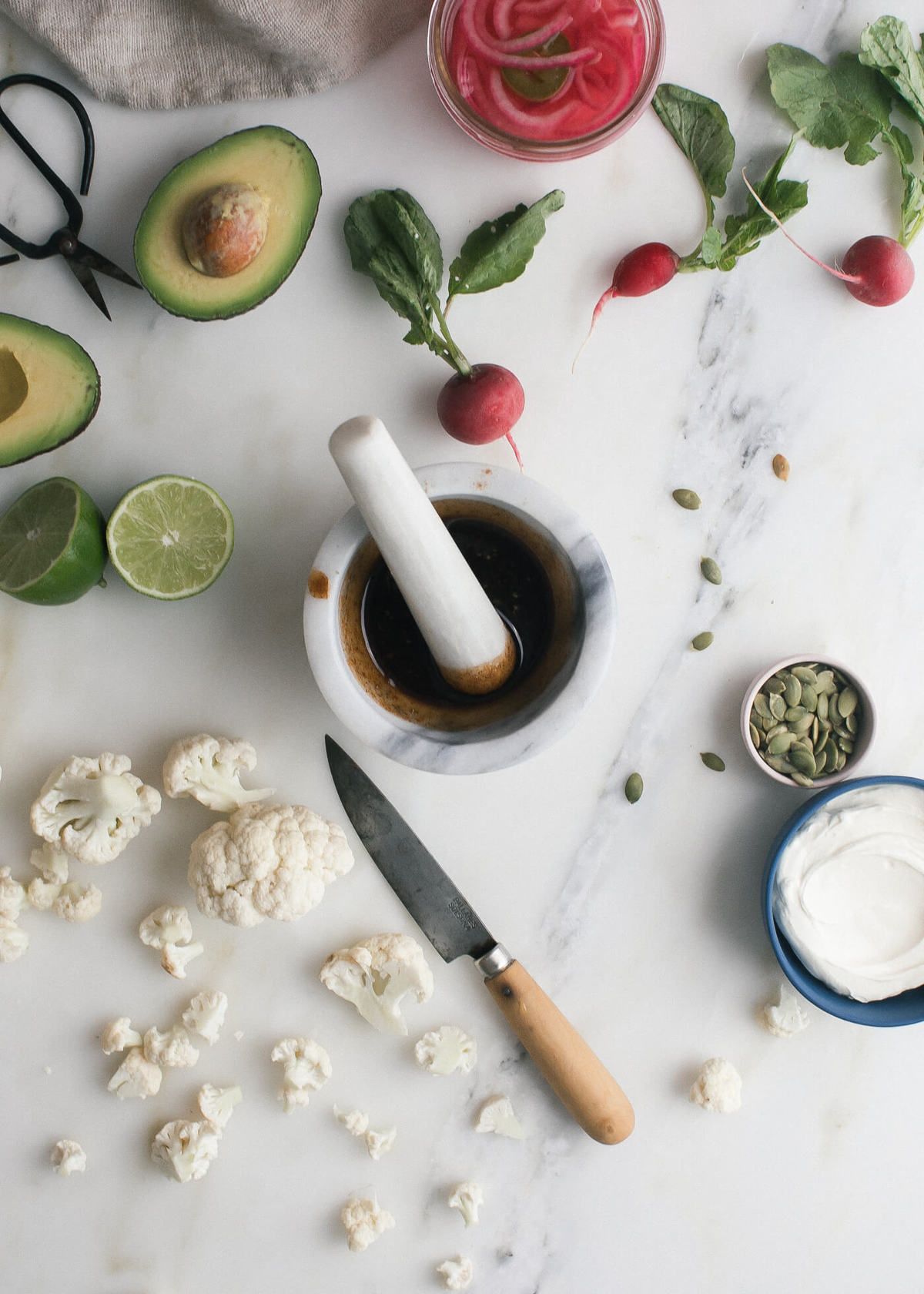 The cauliflower is tossed in this spice mixture and then roasted. It is SO good, I could almost just eat the cauliflower by itself. Cauliflower doesn’t have a ton of flavor on its own so it really requires a lot of flavor to be added. I like to think of like the vegetable equivalent to tofu.

I made an avocado crema, which was way better than I could have imagined. I put sour cream and avocado and jalapeño, salt and lime juice in a blender and it was SO good. If you wanted to go a healthier route, you could do this with yogurt (it would be bomb—I’ve done it!). 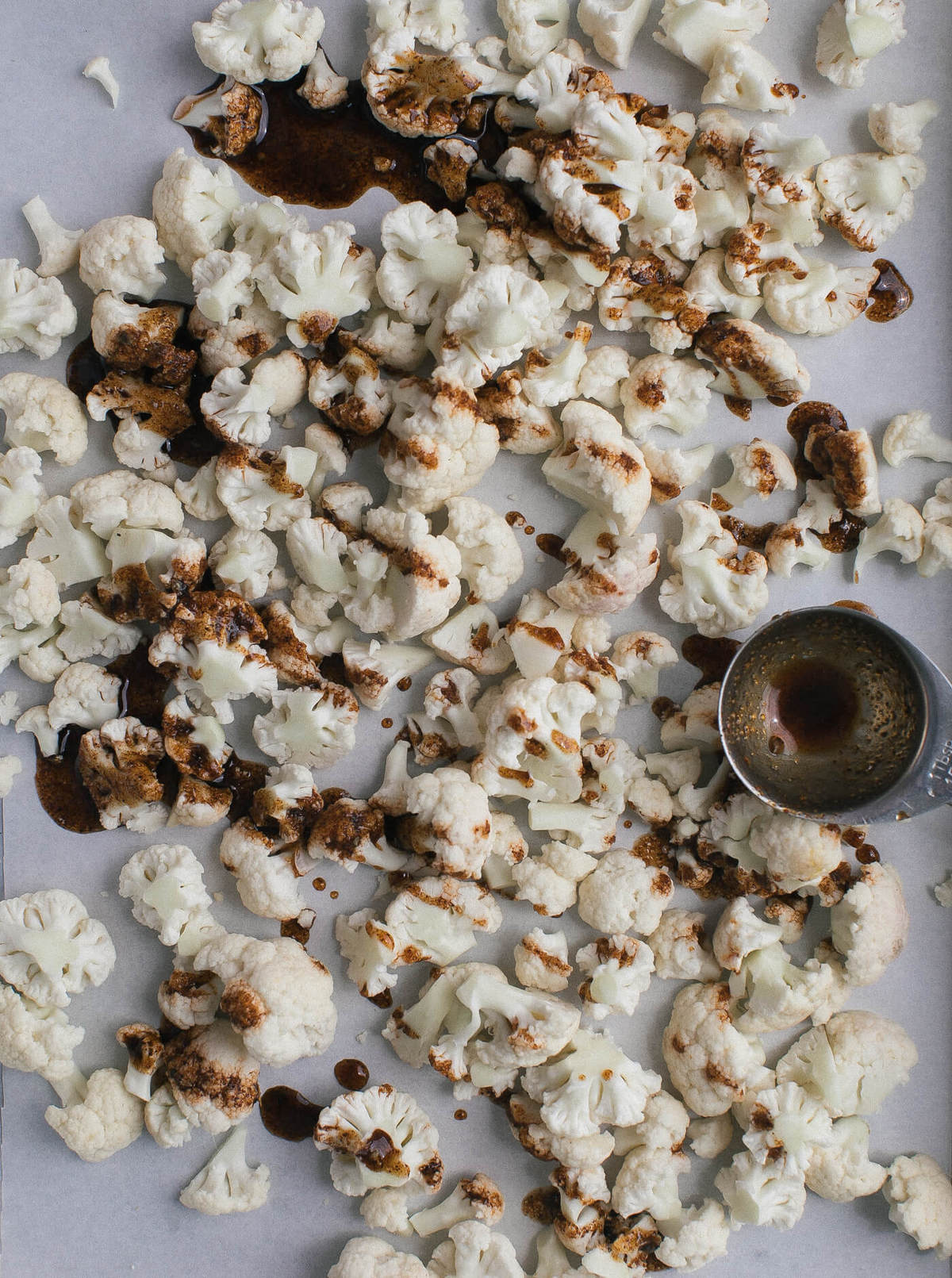 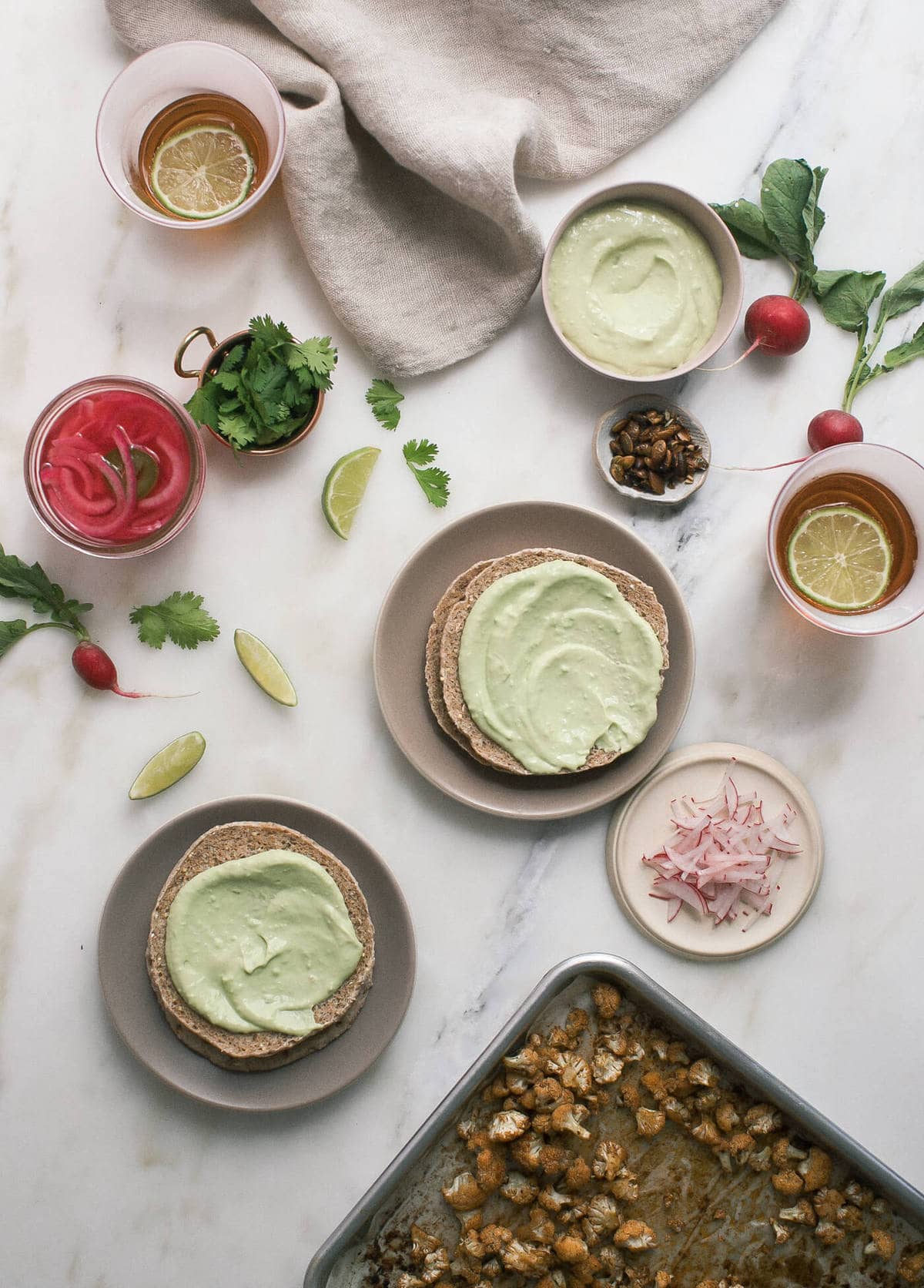 To assemble the whole thing, I took a few buns, smothered that avocado crema on top, added the cauliflower, some pickled red onions, cilantro and toasted pepitas (that were cooked in that spice mixture).

This is the best thing I’ve cooked up in a LONG time and it’ll take you under 30 minutes, too. Big bonus! 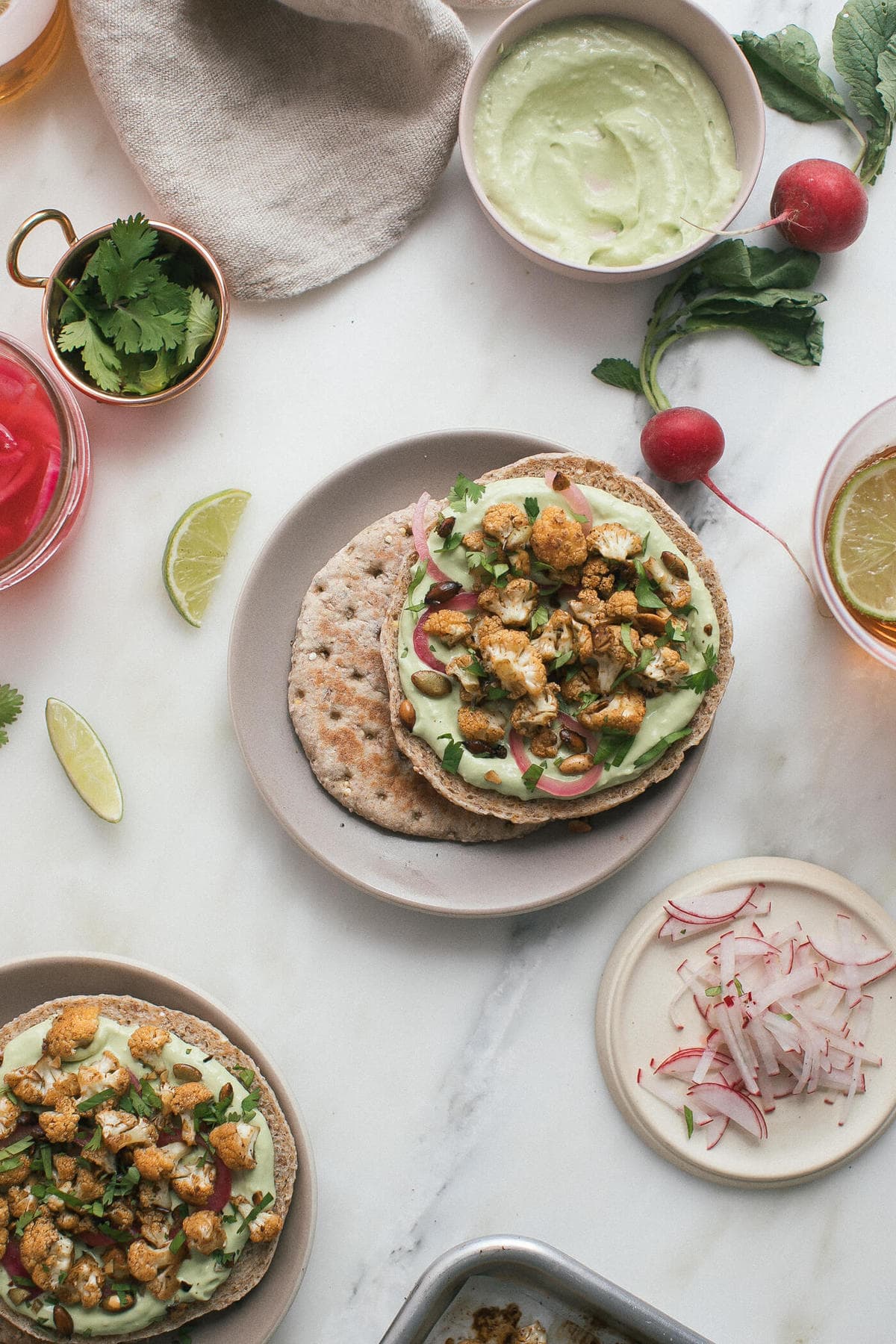 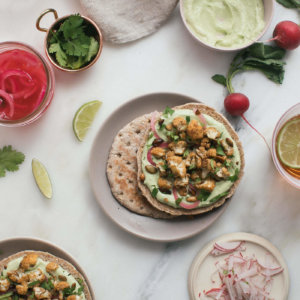 To make the Quick-Pickled Onions:

To make the Avocado Crema:

To make the Cauliflower + Pepitas: 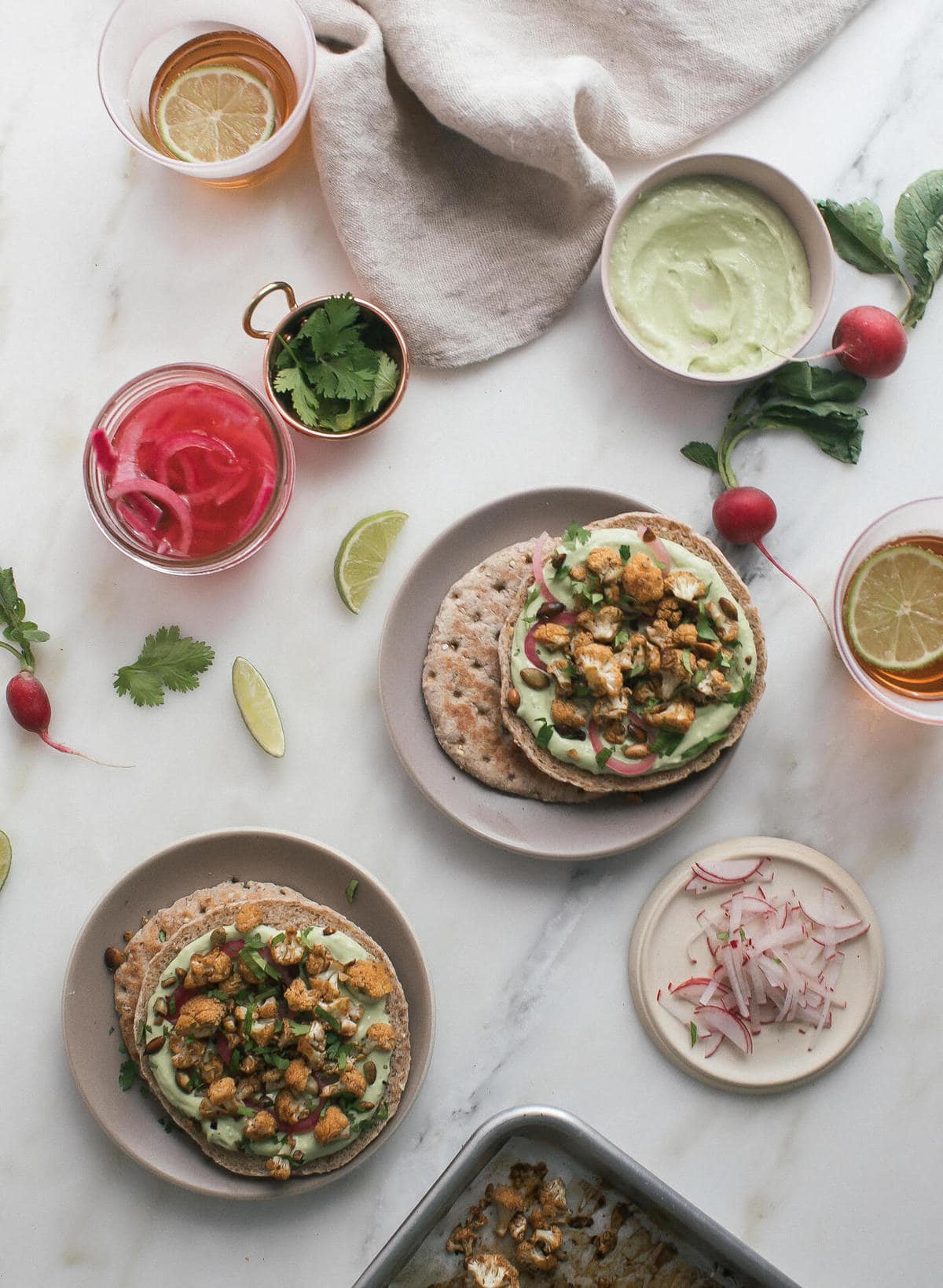 (This post is sponsored by Ozery Bakery. Thank you for supporting the sponsors that keep A Cozy Kitchen cozy!) 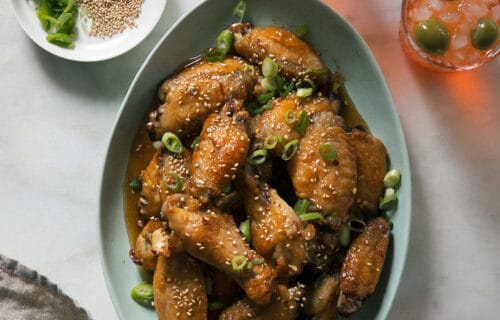 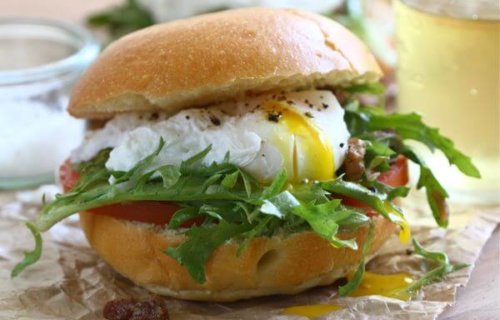 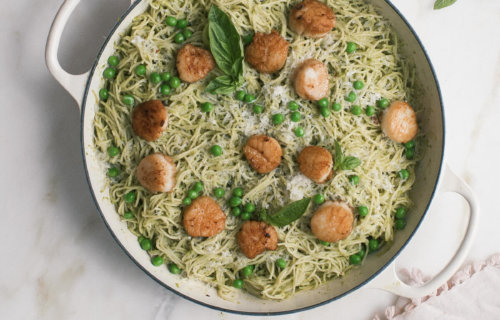