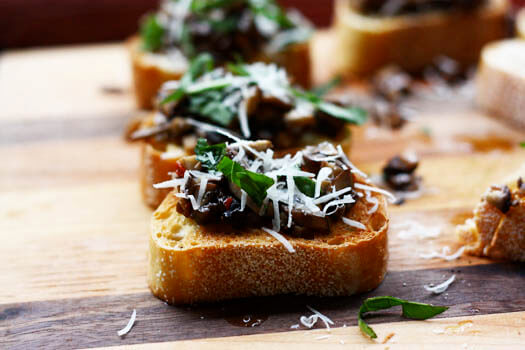 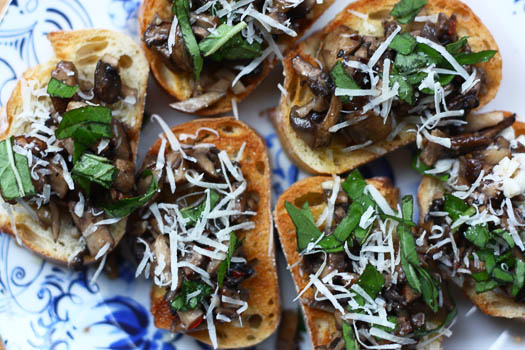 You know that meditation part in a yoga class when you’re only supposed to concentrate on your breathing?

Yeah, I’m really bad at that part. I always get distracted and think about the randomest of things. Like really random stuff. A few days ago I thought about the following:

#1. Step-by-Step! Do you remember that show? All I can remember is that weird intro with the beach next to the roller coaster. Who thought that was a good idea?!

#2. How grateful I am that The Real Housewives of Atlanta is back on! I love how Nene pronounces the word “expensive.” It’s amazing.

#3. Umm…Sweet Potato Tater Tots! Yeah, I made ’em and failed. But don’t worry because I’m gonna make them work. Any tips? I’m open.

#4. And bruschetta…but with mushrooms instead of tomatoes. Tomatoes are SO last season. Literally. 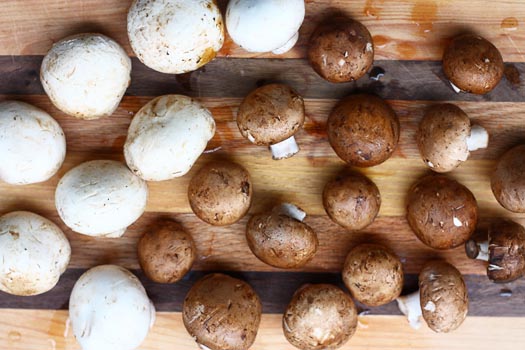 Umm…do you wanna make Mushroom Bruschetta with me? Of course you do!

You’ll need mushrooms. I used a mix of cremini and white button mushrooms. You can use just white buttons ones if you want. It’ll still taste awesome. 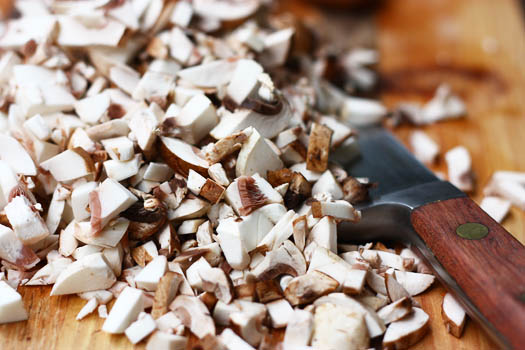 And then I diced them up. 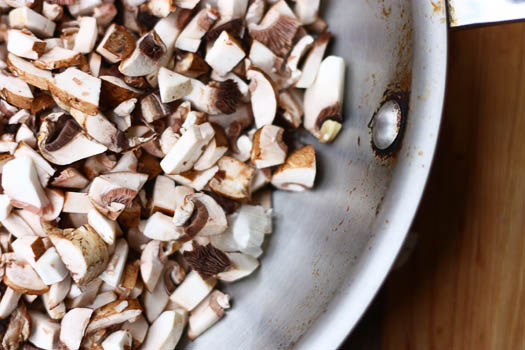 I heated up some olive oil in a pan and added some minced garlic. After that was done heating up, I threw in the diced mushrooms.

While they were cooking I turned my attention to the baguette I bought. 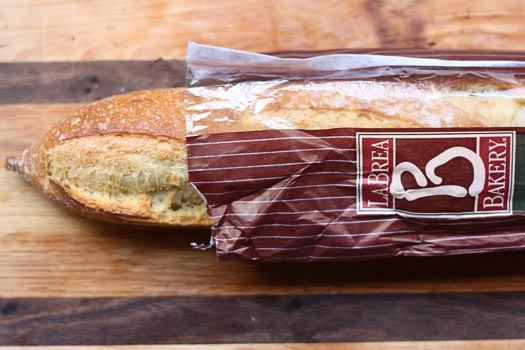 You should use good bread. It’s the right thing to do. This French baguette is from La Brea Bakery. Fancy. This is me name dropping, by the way. 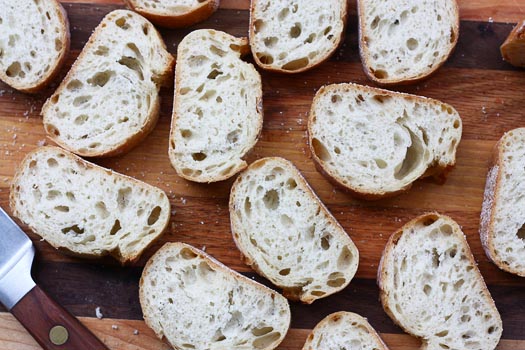 Then slice it up and put it in the oven on a baking sheet. I used my conventional oven because it was easier. 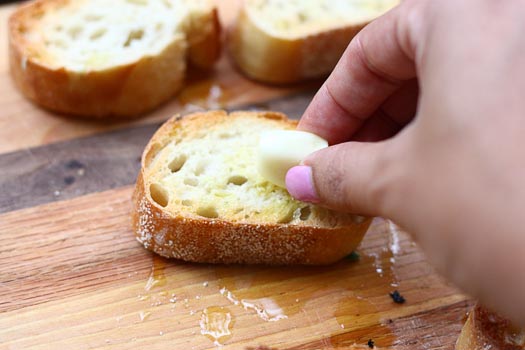 Then drizzle some olive oil over the toasted pieces of bread and rub with a garlic clove.

This is my favorite step. I loooved the background flavor of garlic. Really good. 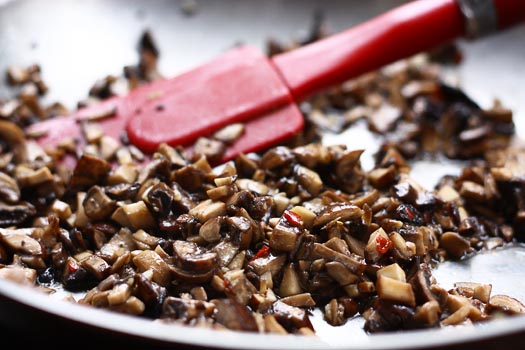 After a few minutes, the mushrooms will be all cooked up. Season them with salt and pepper. I also threw in some crushed red pepper, which I literally put on everything. 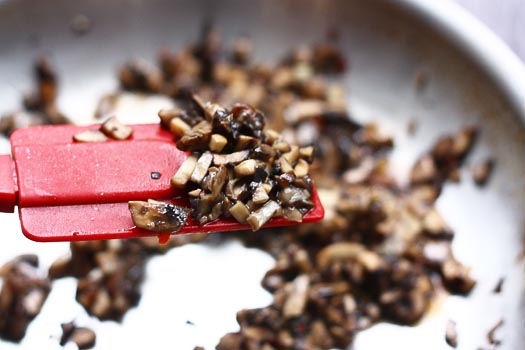 Then put it on your bread and top with some basil and parmesan cheese. 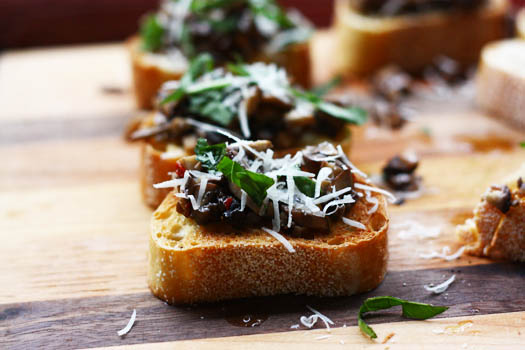 salt and pepper to taste

A handful of basil leaves

Start by taking the stems out of the mushrooms and cleaning them. I ran them under light water and wiped off any dirt with a damp paper towel.

After they’re clean and pretty, dice them up. In a skillet, heat a few tablespoons of olive oil over medium heat. Mince up a clove of garlic and add it to the olive, being sure it doesn’t burn. Then throw in your diced mushrooms, stirring them and making sure they’re all coated in olive oil.

Grab your French baguette and slice it up! Put in an oven (you would’ve needed to pre-heat the oven at 400F) or in a conventional oven for a 2-3 minutes, or until golden brown. Remove them and drizzle with olive oil. Rub the other garlic clove over its surface.

When the mushrooms are done cooking, season with salt, pepper and add the 1/4 teaspoon of crushed red pepper.

Scoop a tablespoon of the mushrooms over each piece of bread. Top with pieces of basil and grated Parmesan cheese. 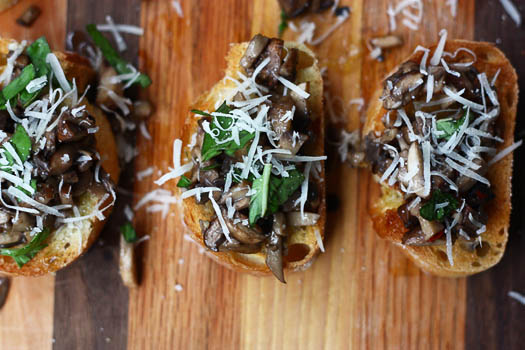 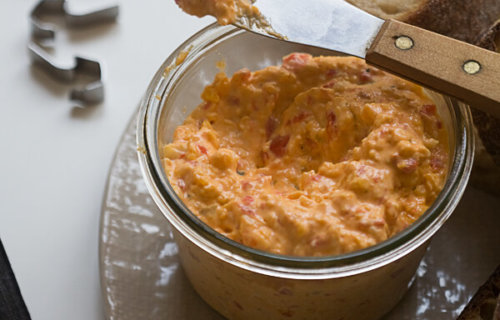 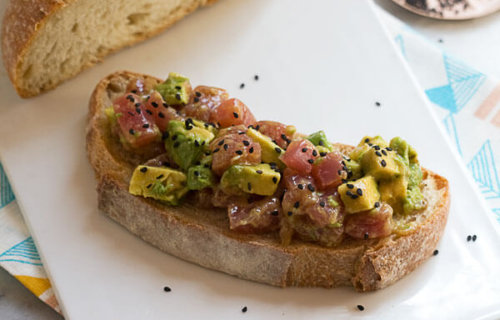 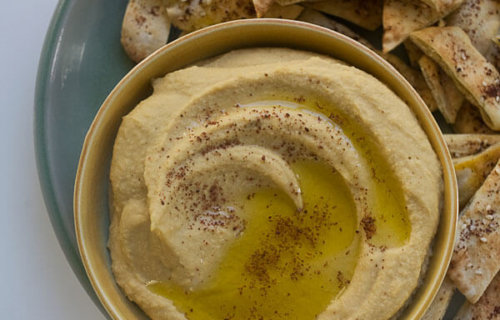