Published Aug 29, 2011Last Updated Dec 23, 2018
Leave a Comment
Sometimes I do things I’m not so proud of. This is true. Like…putting ice cubes in white wine. I’m impatient. I dunno…in the privacy in my own house I like “mom” wine. Gross. I sometimes buy… 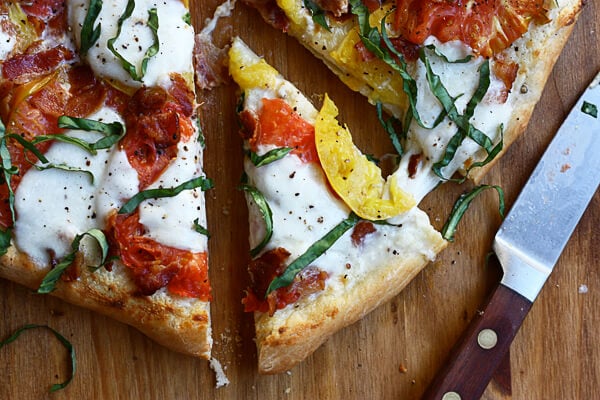 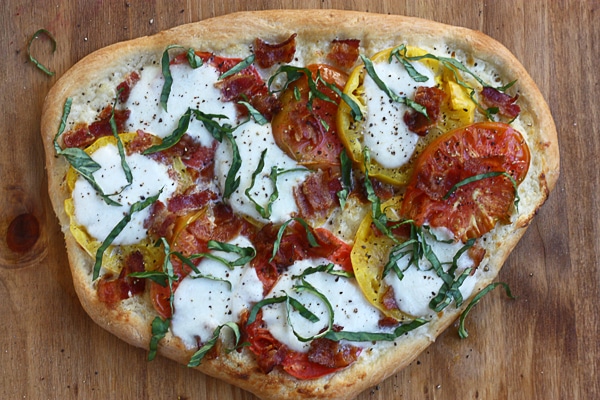 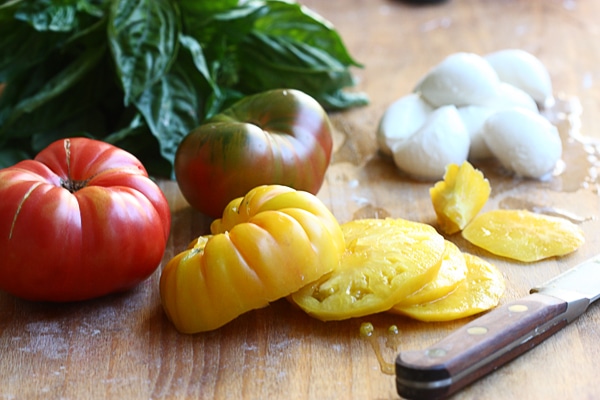 Do you bake your bacon? (That sounds like a personal question, doesn’t it?) 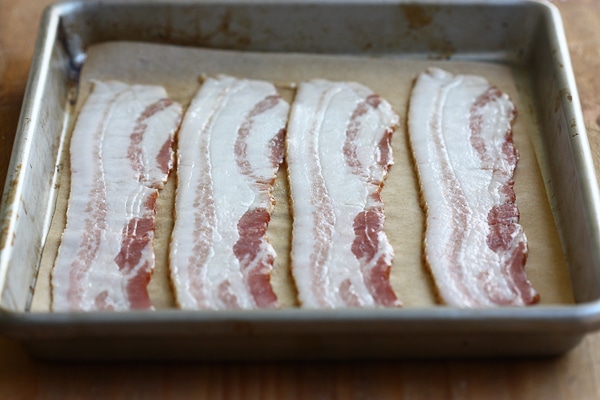 But seriously it’s the only way to go. It’s easy, no mess. In the oven for 15-20 minutes. No bacon grease splattering all over the place–just perfect bacon every time. 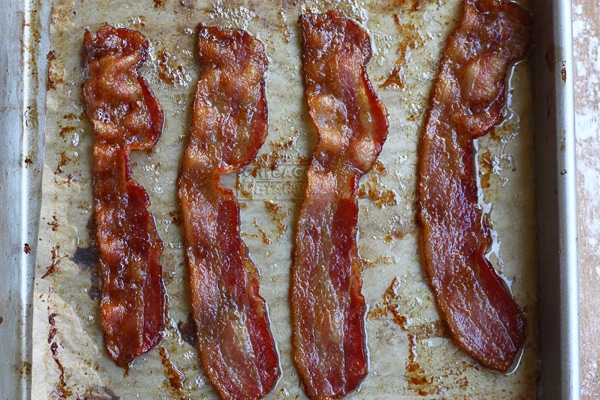 I used Peter Reinhart’s pizza dough recipe again. It’s so SO good. It has a slow rise in the fridge.

General rule of thumb: the slower the rise, the more time flavors have to develop.

That’s why this slow rise in the fridge yields such delicious results. If you don’t have the time, I suggest just letting it rise for a few hours in a warm place in your kitchen. It’ll totally be better than most pizza doughs. Trust.

You’ll know when it’s ready to be baked up when it makes that adorable belly-button situation when you stick your finger in the center. If it bounces back, it’s not ready. If it keeps its shape, it’s ready. 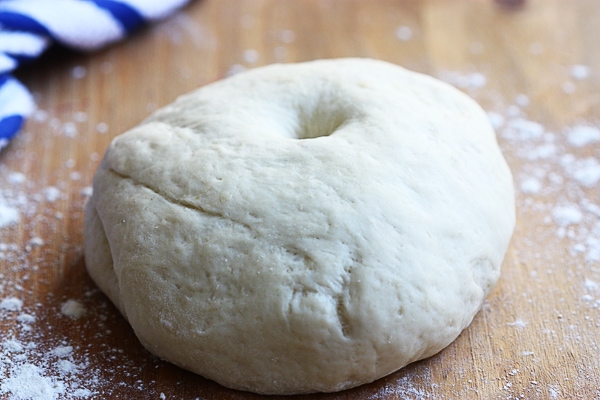 My brain wanted to really turn this sandwich into a pizza. So I wanted to work the mayonnaise situation into this pizza, too. Since having a base of mayo would be just gross (wait, would it?), I swapped that out with a goat cheese alfredo sauce. Hello! Yum!!

There’s a little roux action, half & half (because we all have that in the fridge) and the goat cheese. Delicious. Rich. 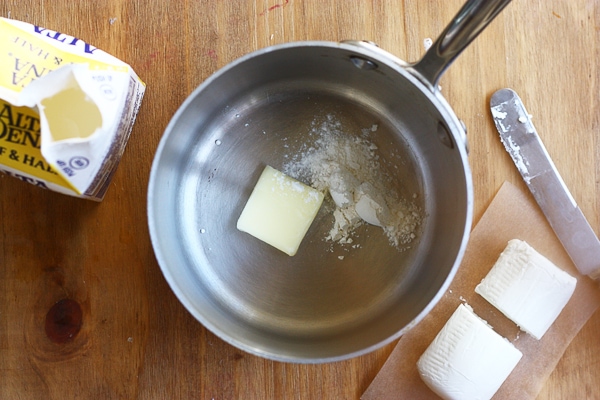 When your pizza dough is all good, stretch it out into an oval or circle or a rectangle. Or the shape of dinosaur. I wanna eat a pizza the shape of a T-Rex.

So whatever shape you’re into is cool.

Spread around the alfredo sauce and stick it in the oven. We’re gonna par-bake this thang for 10 minutes or so. 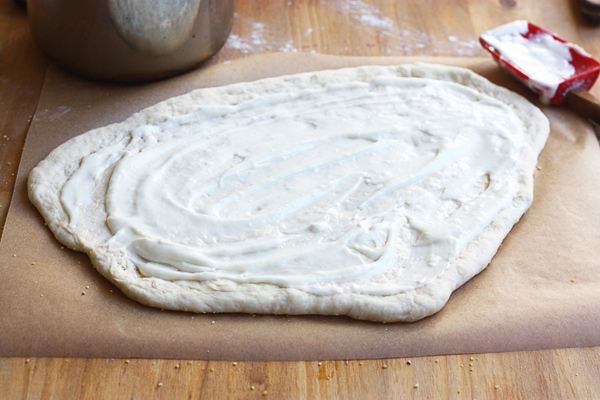 Since tomatoes release so much water we only want to bake them for a little bit. We want them a little warm. And soft. If we bake them for the full 20 minutes, our pizza will be totally watery. Not cute. Totally not cute. 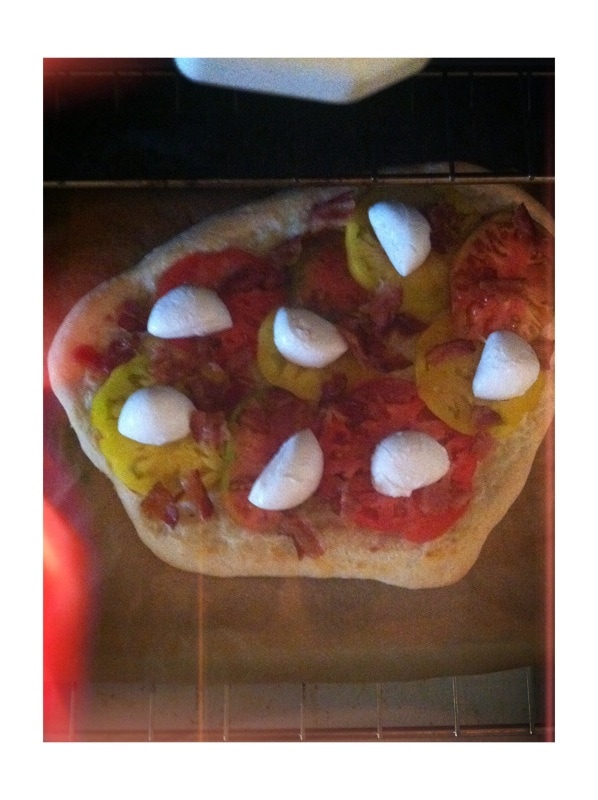 So 10 minutes in, I opened up the oven and put on the tomato slices, mozzarella and bacon. Baked it for 7-8 more minutes and tadaaaaaa…. 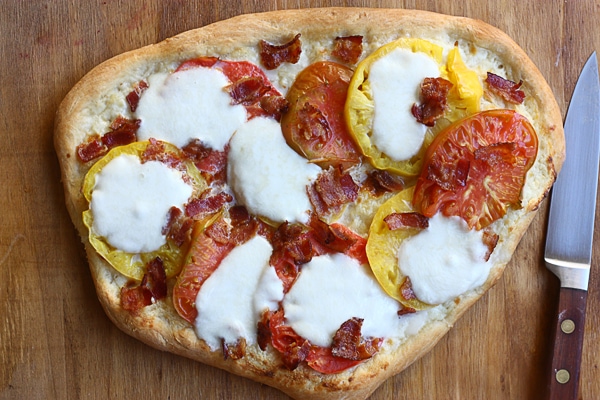 That doesn’t look nearly as cute as it should. Let’s rev up the cuteness.

Crack some pepper all over it and sprinkle on some salt. Yum.

Sandwich in pizza form. Dooooo it! 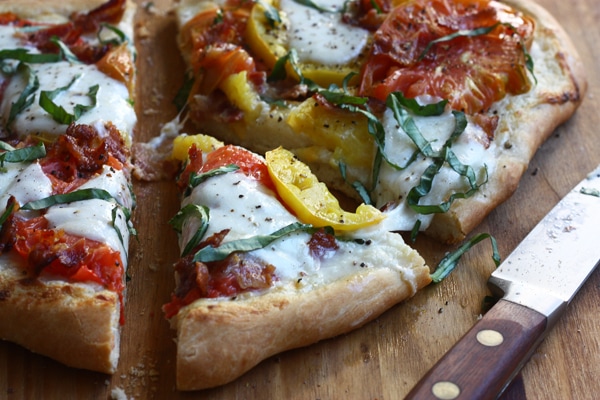 Goat Cheese Alfredo sauce:
1 tablespoon of butter
4 teaspoons of flour
3/4 cup of half and half
1 oz. goat cheese
3/4 teaspoon of salt

1. Prepare the pizza dough.
2. Pre-heat oven to 450F.
3. In a medium sauce pan, over medium heat, melt the butter. Add the flour, stirring constantly with a wooden spoon for 2 minutes. Pour in the half and half and stir until it comes to a boil. Boil, whisking constantly, for 1 minutes, or until thickened. Take it off the heat and mix in the goat cheese and salt. Set aside.
4. Stretch (or roll) dough into circular shape. Add a thin layer of goat cheese sauce on its surface and bake for 10 minutes.
5. While that’s baking slice up your tomatoes, bacon and mozzarella. And get ready. It’s almost game time.
6. At the 10 minute mark, open the oven and carefully (it’s hot!) arrange the tomatoes, bacon and mozzarella on the dough.
7. Bake for another 7-8 more minutes, or until dough is golden brown and cheese is melted.
8. Remove and top with thinly sliced basil and salt and pepper.
9. And then EAT. That step is obvious.