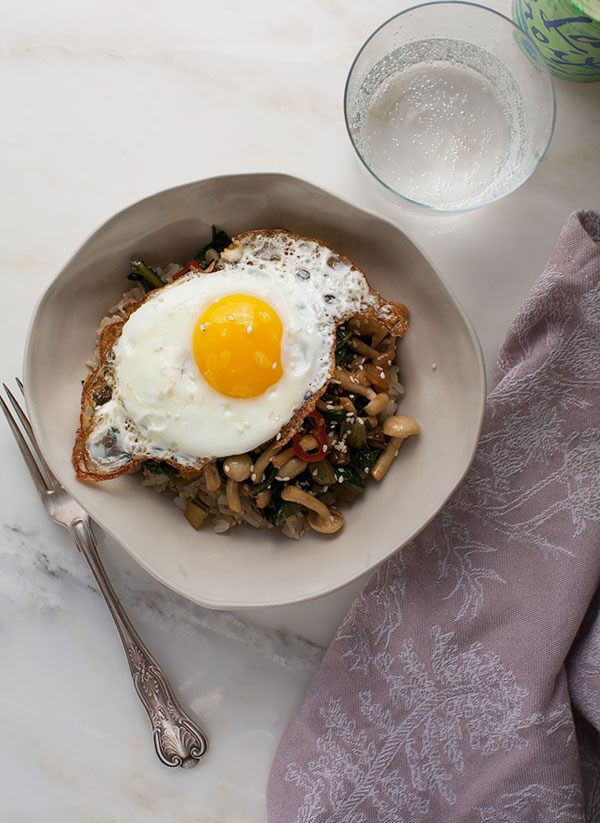 This Enoki Mushroom Stir-Fry is the ideal meal for one person. This vegetarian stir-fry is flavorful, quick, delicious and the perfect weeknight meal for a single person. Easily double or quadruple it for a crowd. 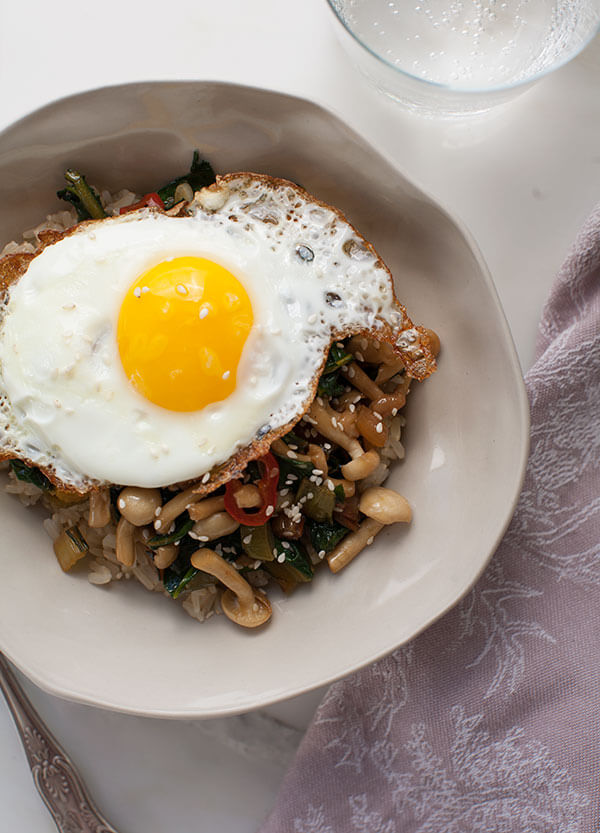 If there’s one thing I’ve always wanted to do is create a bunch of recipes for one person because A LOT of the time, I eat alone. And it’s not sad, it’s actually glorious! I make dinner, I pour myself a glass of wine or beer, or I pour some iced tea over ice, put a trashy TV show on and eat. It’s super chill!

Cooking for one isn’t always easy. I’m not a big leftovers person so I don’t really care to eat the same thing the next day for lunch.

This stir fry is full of flavor thanks to the soy sauce and mirin (Japanese cooking wine), ginger, lime and lots of garlic. 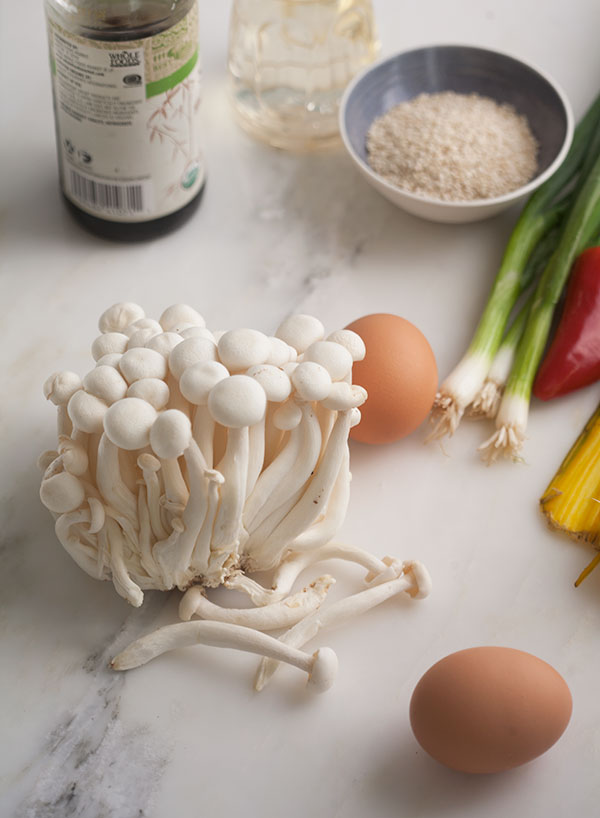 What Are Enoki Mushrooms?

Enoki Mushrooms are a variety of mushroom from Japan which also goes by the name of “enokitake.” Wild enoki mushrooms can vary but the farm-raised enoki mushrooms you’ll most likely find at the grocery store is generally very thin and sold in clusters. They’re delicious in everything from soups to stir-frys. Like this one!

If you don’t have access to enoki mushrooms, feel free to substitute them with creminis or oysters or even button mushrooms would be fine. I found mine at an Asian supermarket for about a dollar for a bunch. If you’re only seeing them at your gourmet super market for $6, I say go with creminis. That’s highway robbery! 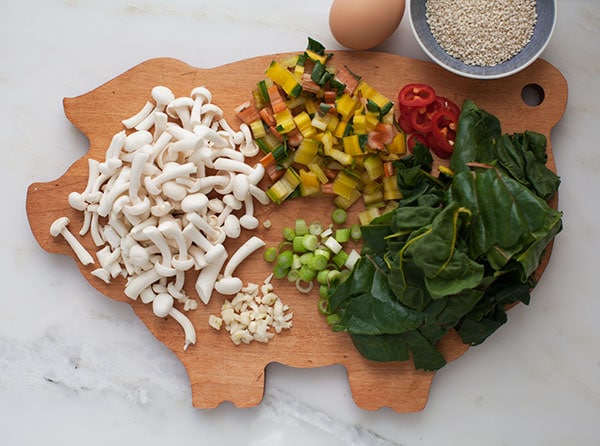 How to Make Enoki Mushroom Stir-Fry 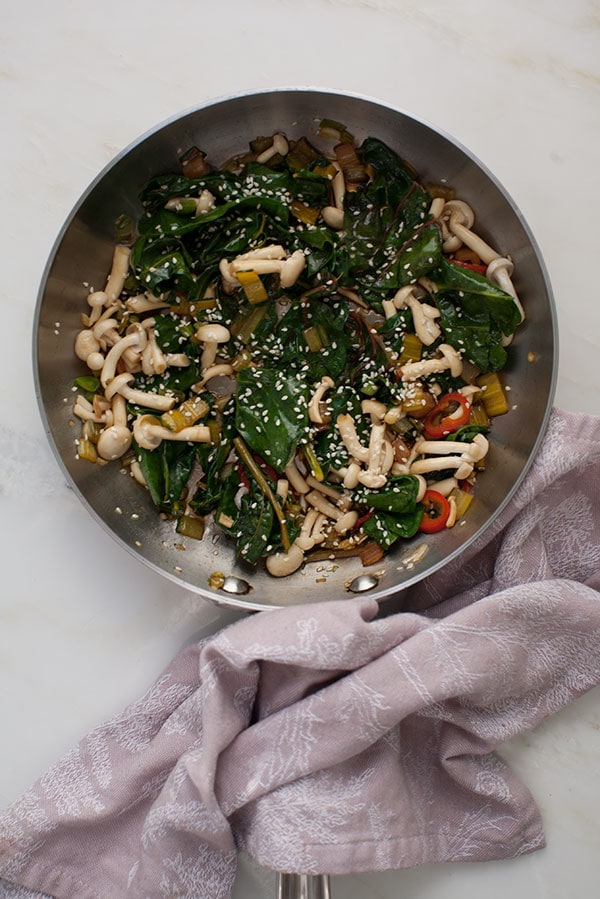 I like to serve mine with white or brown rice but if you’re staying away from it for whatever reason, you could always do cauliflower rice!

And like all things, an additional fried egg is best. For instance, this stir-fry ALSO benefits tremendously with a fried egg on top.

If you end up making this Enoki Mushroom Stir-Fry, let me know on Instagram! 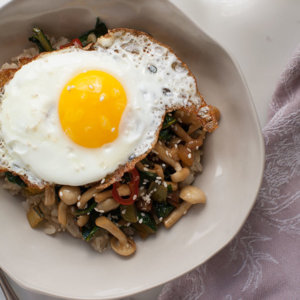 Swiss chard works in this dish, though other greens would be awesome, too. Think savoy or napa cabbage, baby bok choy, mustard greens and even kale. If you don’t have low-sodium soy sauce, just regular, I’d suggest bringing down the soy sauce to 1/2 tablespoon.
Nutrition Facts
Enoki Mushroom Stir Fry
Amount Per Serving (1 g)
Calories 0
* Percent Daily Values are based on a 2000 calorie diet.
Did you make this recipe?Tag @acozykitchen on Instagram and hashtag it #acozykitchen

If you’re looking for more Asian-inspired recipes, here are some favorites:

Dinner for OneGluten-FreeHealthyPut An Egg On It
March 10, 2015 by Adrianna Adarme 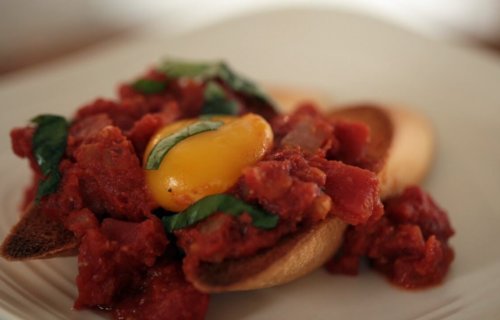 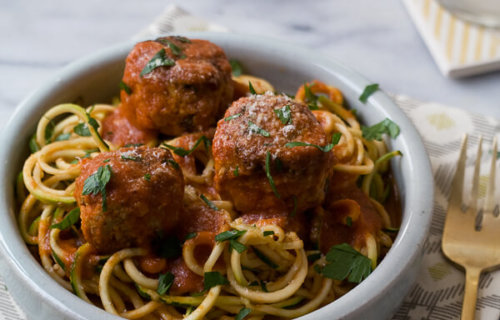 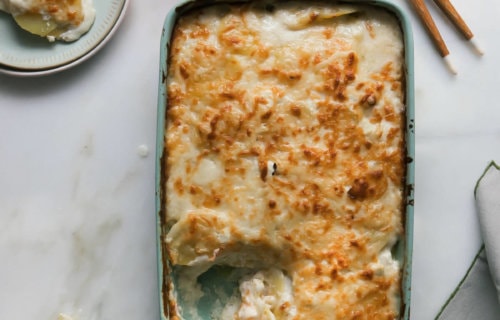