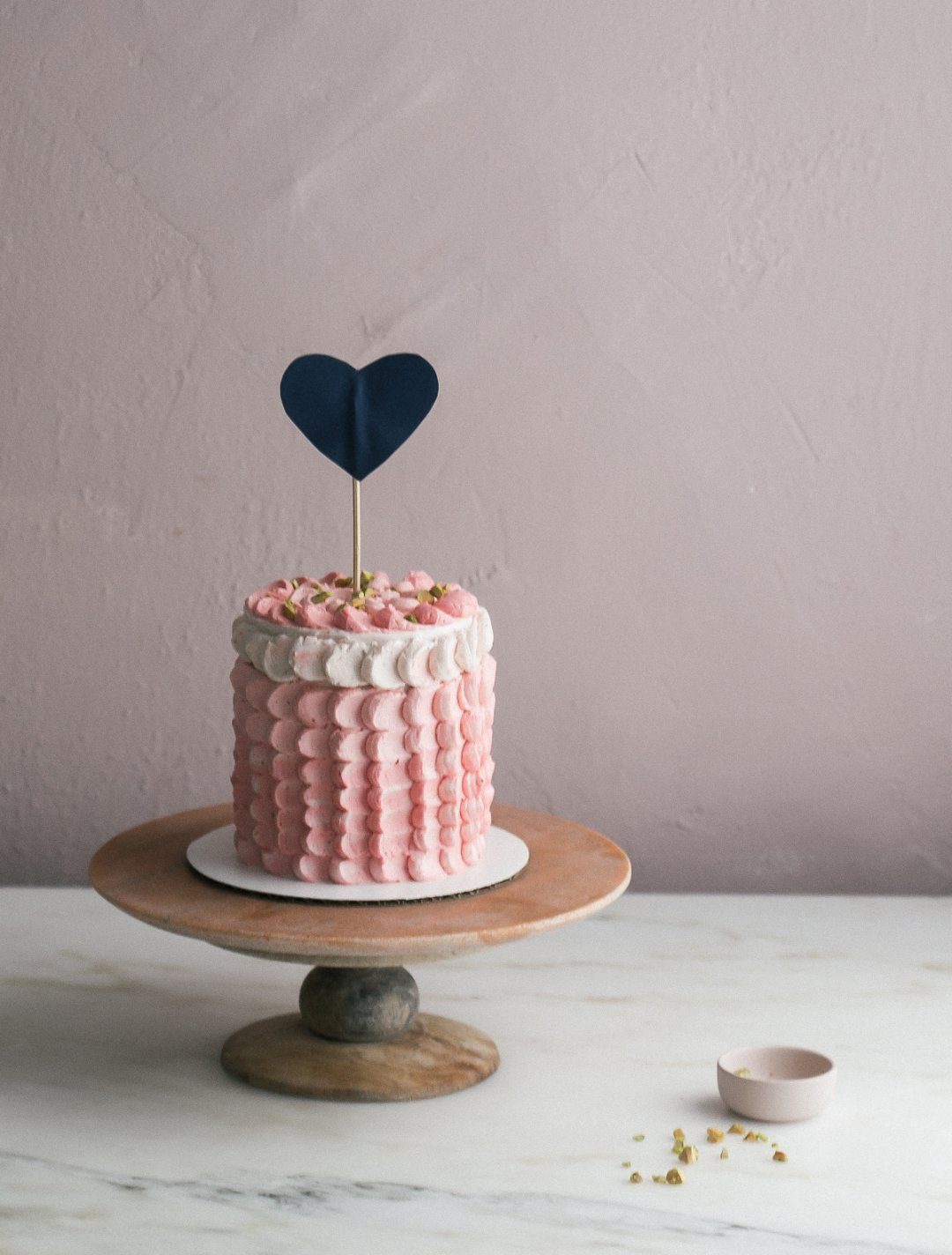 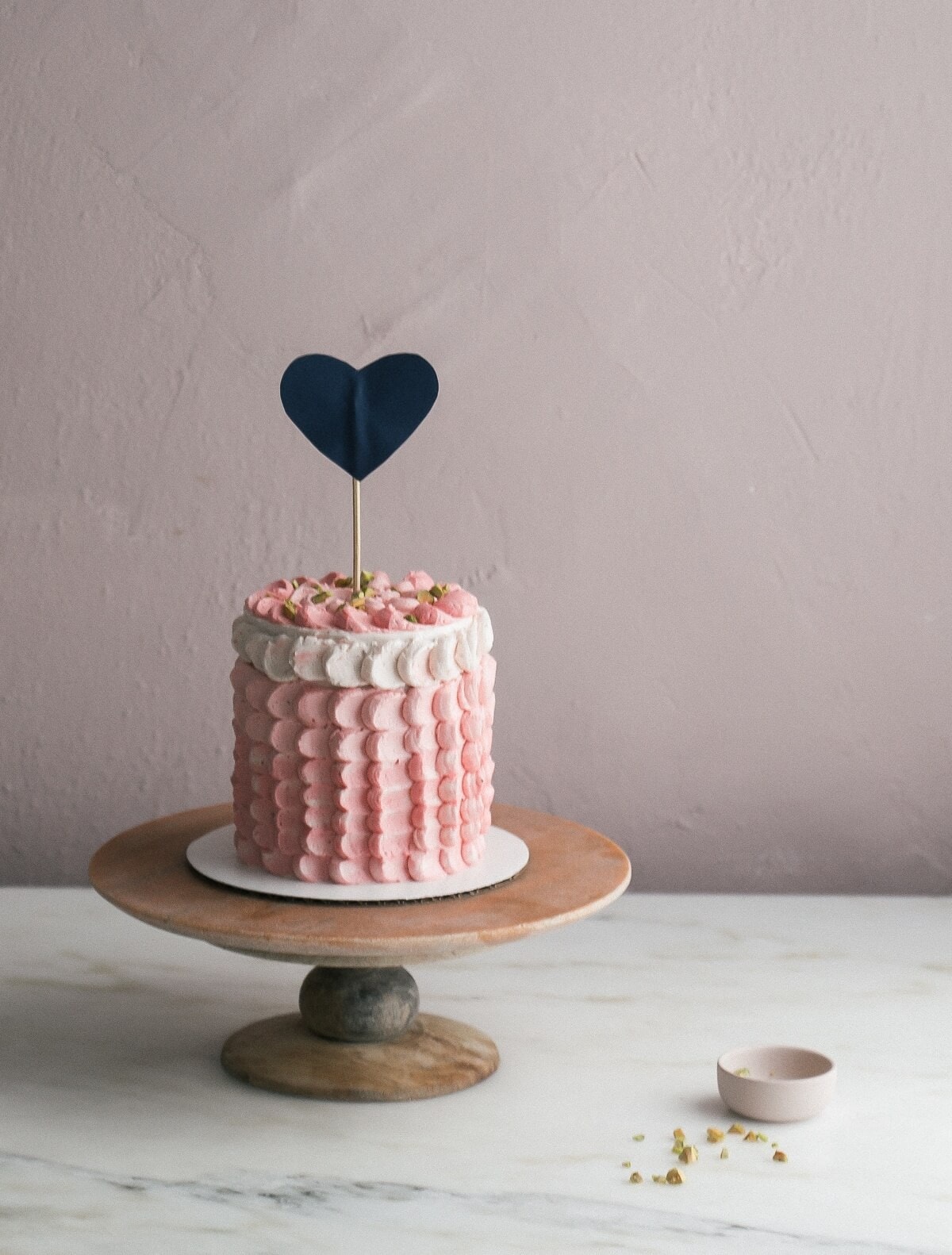 A month ago or so I got a friend from my old friend Chris who was like, “Hey I’m getting married, will you make a cake for us.”

Of course, I responded with OMG YES!

Not only was I excited because making stuff for friends is fun–especially for such a super cute and special occasion–but because it liked the challenge of doing something I’d never done before: making an important cake and then driving up and down the hills of Echo Park with it in tow. SO STRESSFUL!

Josh’s mom was a pastry chef and early in her career she made a lot of wedding cakes. He told me that one time she delivered the cake, decorated on the wedding site and then it fell over when they wanted it moved to another table! LIKE STRAIGHT UP ON THE FLOOR. 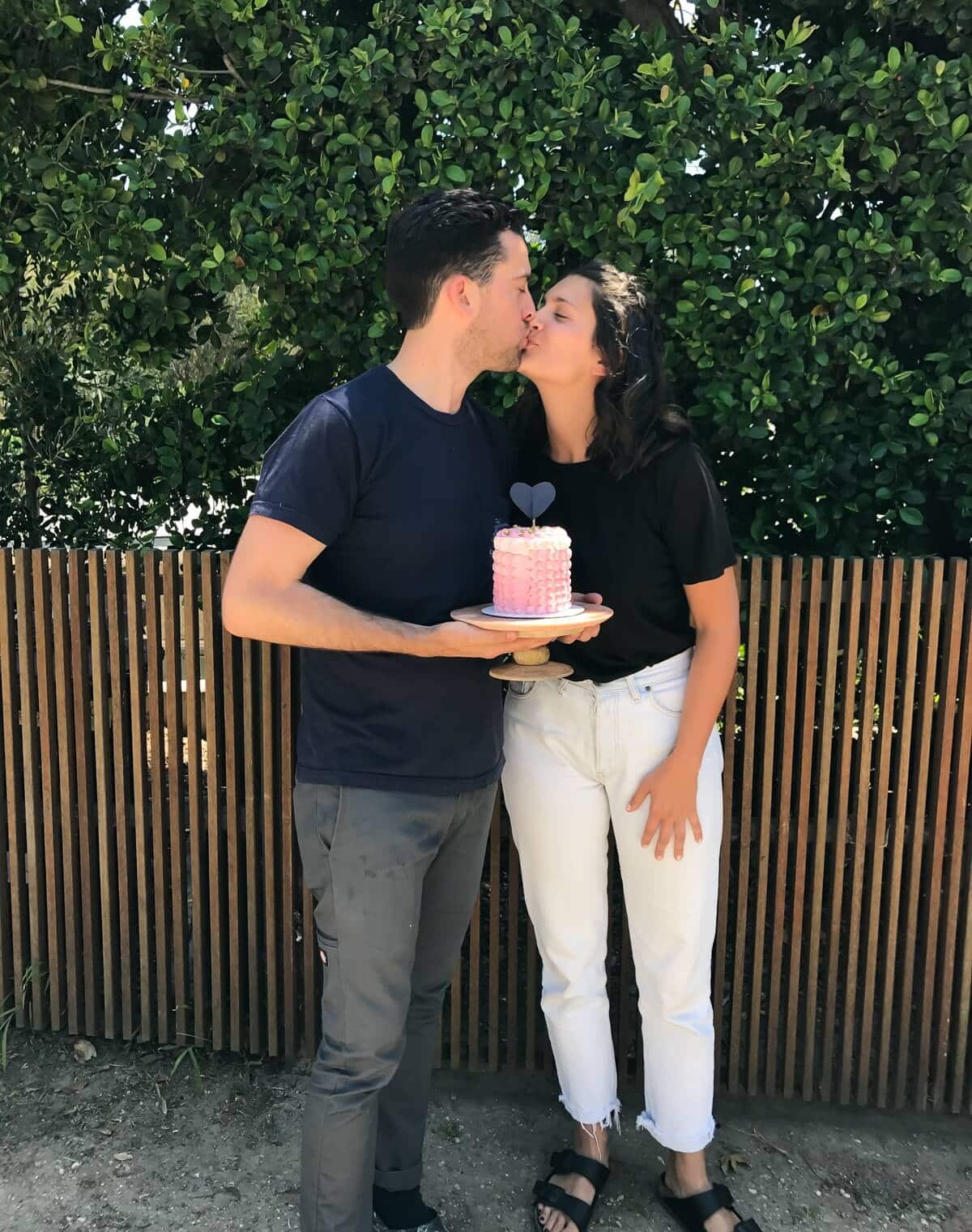 I would cry. I’m sure she did. Josh told me she eventually had to stop because the stress of transporting the cakes just didn’t end up being worth it and I completely understand now—it’s a lot. Luckily this was a small lil’ cake so transporting it wasn’t that hard.

I’ve known Chris for a long time and as of last year, he’s kind of become Amelia’s babysitter when we go out of town. He is so very patient when she wakes him up at 6am for breakfast and he takes her on long walks and last year, when we went to Seattle, they packed her up and took her to Malibu to eat oysters. 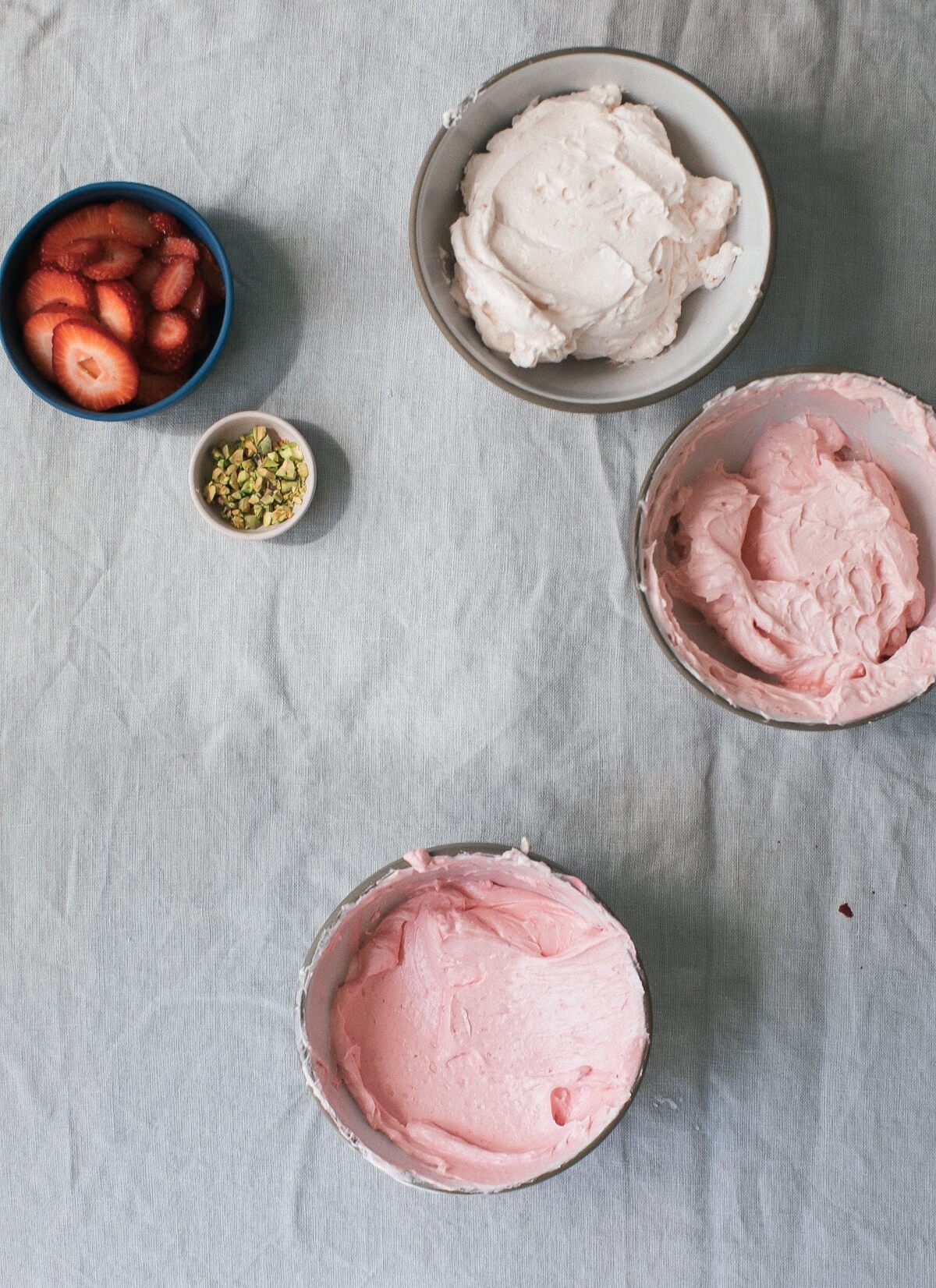 She loves them so much and they’re both so sweet that I wanted to make something cute. Camille, his wife, said she wanted something ombre but spring-y. I turned to one of my favorite cakes, this pistachio cake and decided to pair it with sweet strawberries.

The frosting is strawberry frosting that I tinted in an ombre effect. I divided it into three bowls and no food coloring to the first bowl (it had strawberry puree in it tho!), like 3 drops to the second and 4 to the last one. 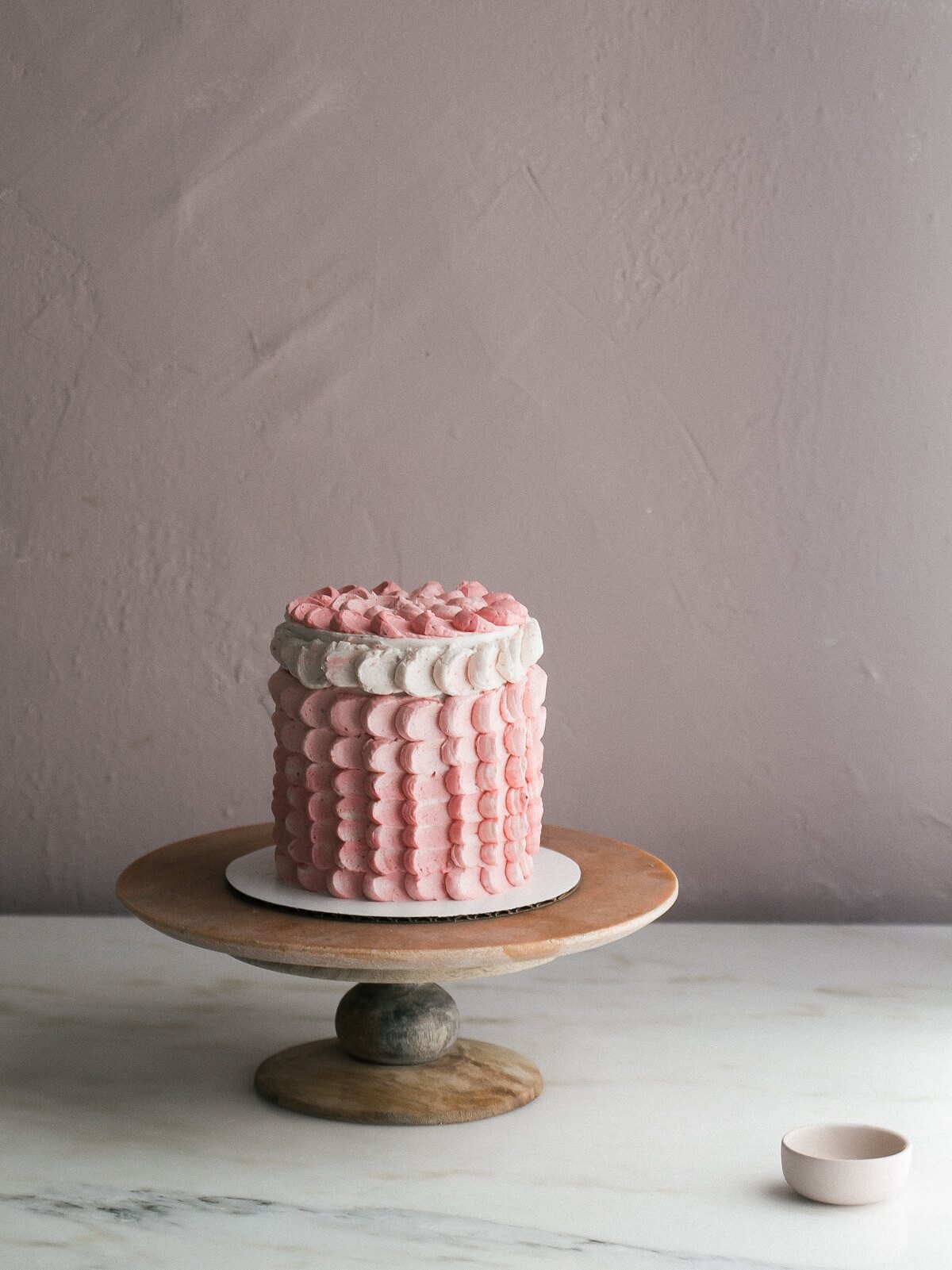 I decorated it in that dollop, swoop way. It’s actually kind of simple to do but it just takes a bit of patience.

I ended up putting on The Great British Bake-Off and decorating away. It took me about an hour but was actually super relaxing.

I put a little heart (that I glued to a skewer) right on top and it was ready to go!

And then came the car ride.

Luckily, LUCKILY it wasn’t too far away. I live in Echo Park and the party was happening in Silver Lake but if you’ve ever been to my neighborhood, you know that it has incredibly steep hills. 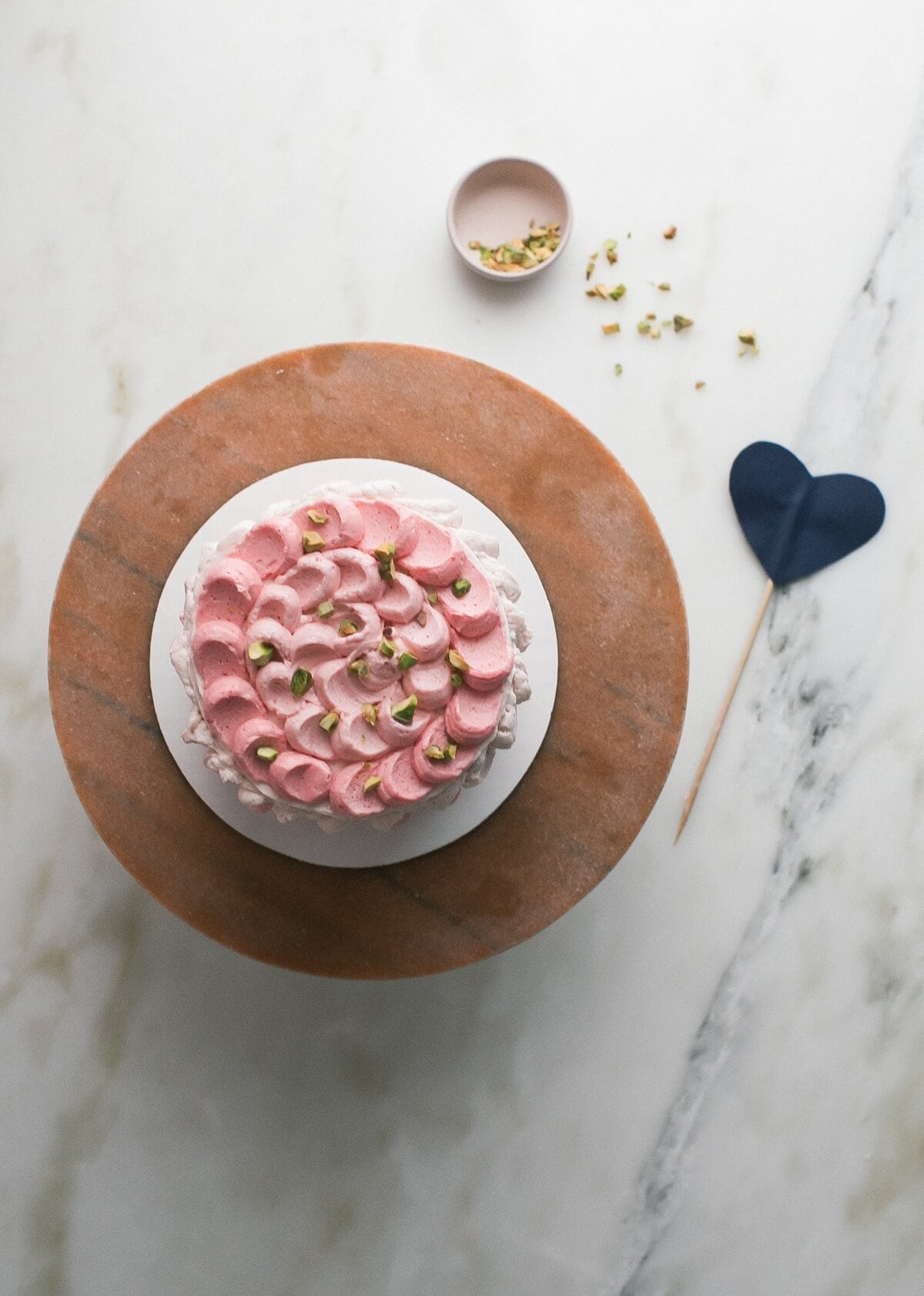 I live on a super steep hill so I parked my car at the bottom of the hill and carefully walked the cake down the hill. I brought a cutting board to put in my front seat so it had something stable to be one. AND, I took it off the cake stand (it was just on a cake board). I blasted the AC so the buttercream wouldn’t melt off.

And then, I drove…slowly. Like, 5 to 10 mph the entire way. The poor people behind me.

But it ended up being so worth it because they are the cutest couple! 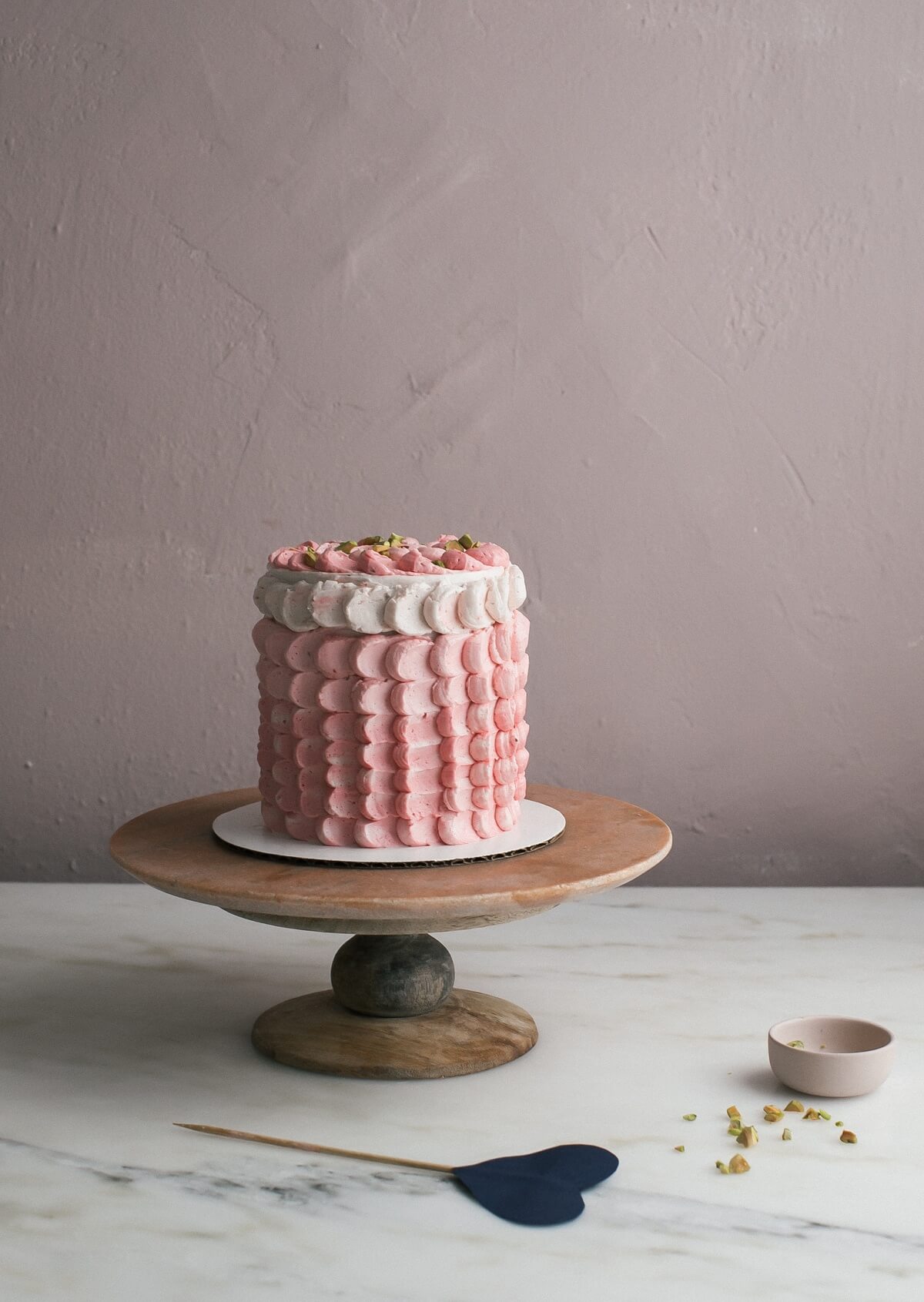 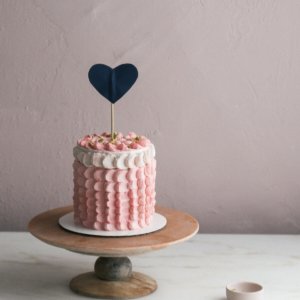 To make the pistachio paste:

To make the cakes:

Serving: 2g
Did you make this Recipe? Tag me Today!Tag @acozykitchen on Instagram and hashtag it #acozykitchen
April 27, 2017 by Adrianna Adarme 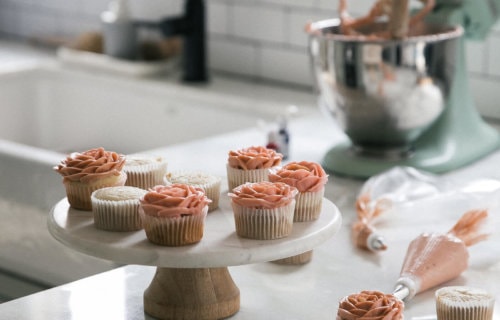 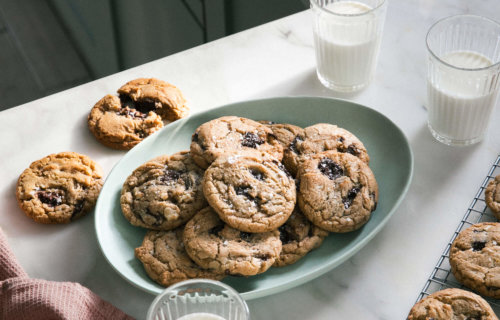 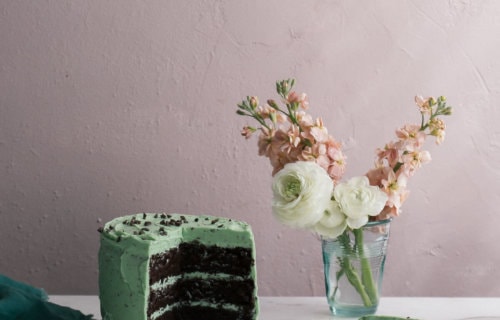