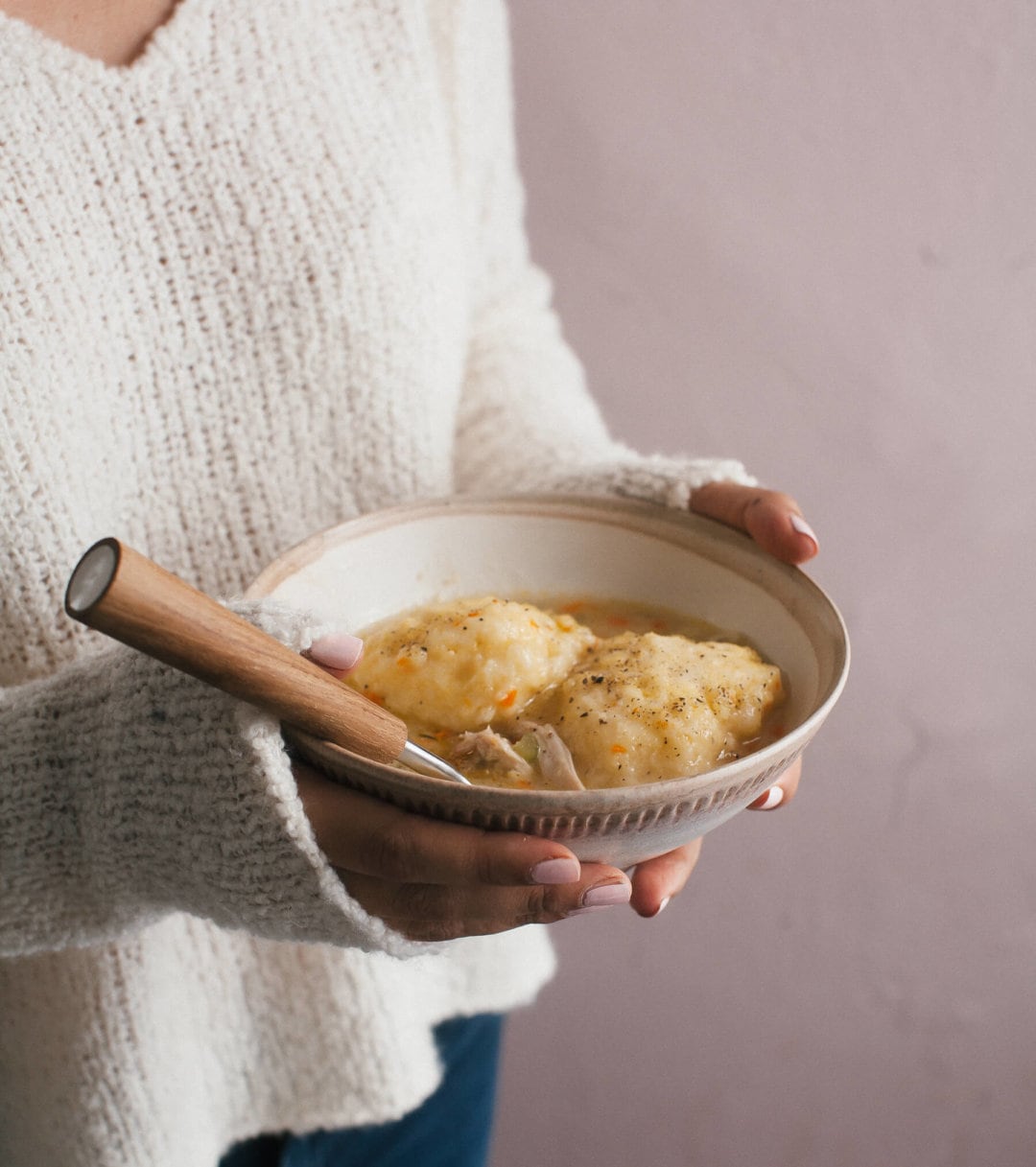 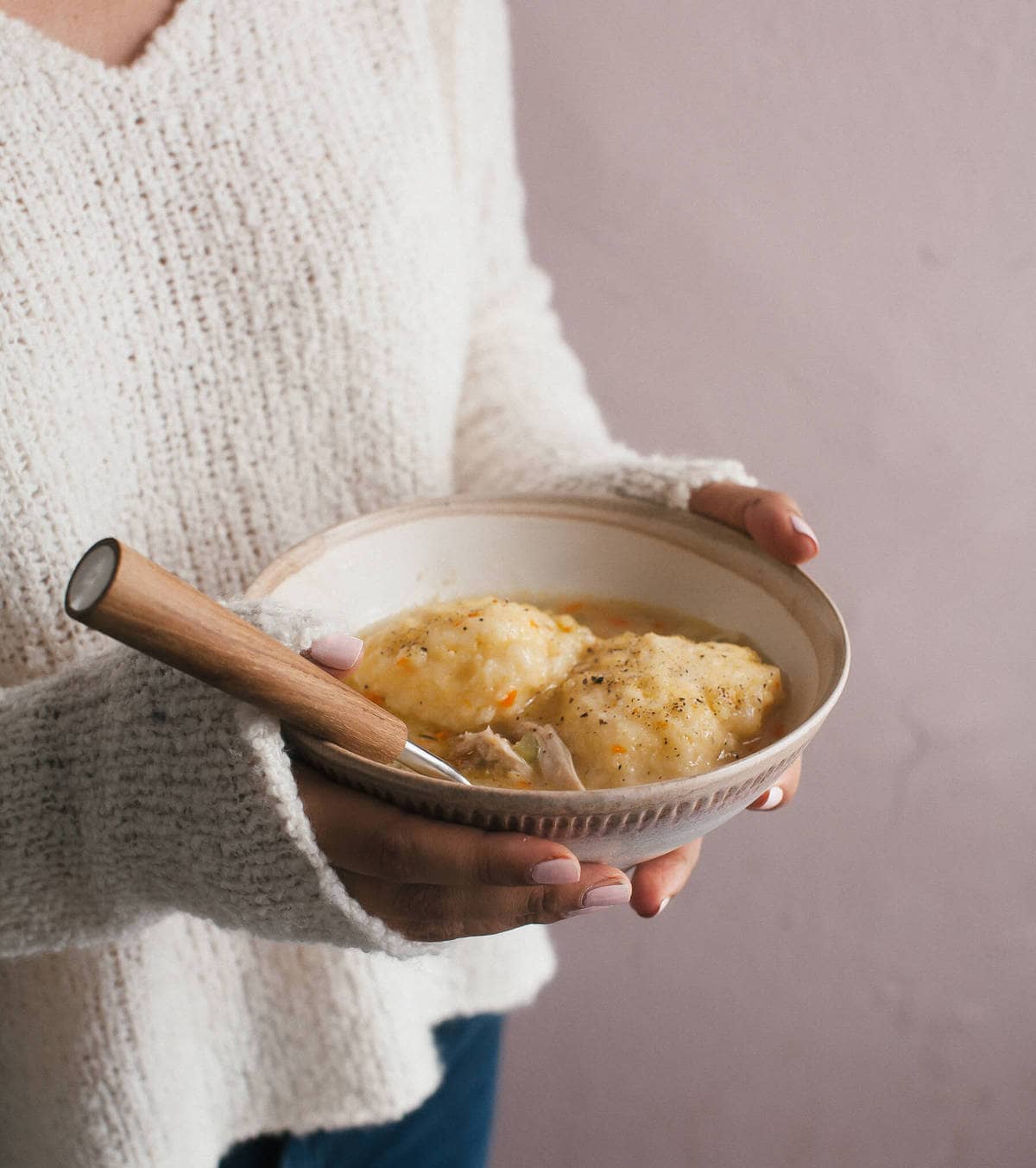 I have been on the verge of almost getting sick for almost a month. And if you’re like me and feeling a bit under the weather or are simply FREEZING cold all the time, then look no further. All you need in your life is a big bowl of this Cornbread Chicken and Dumplings. 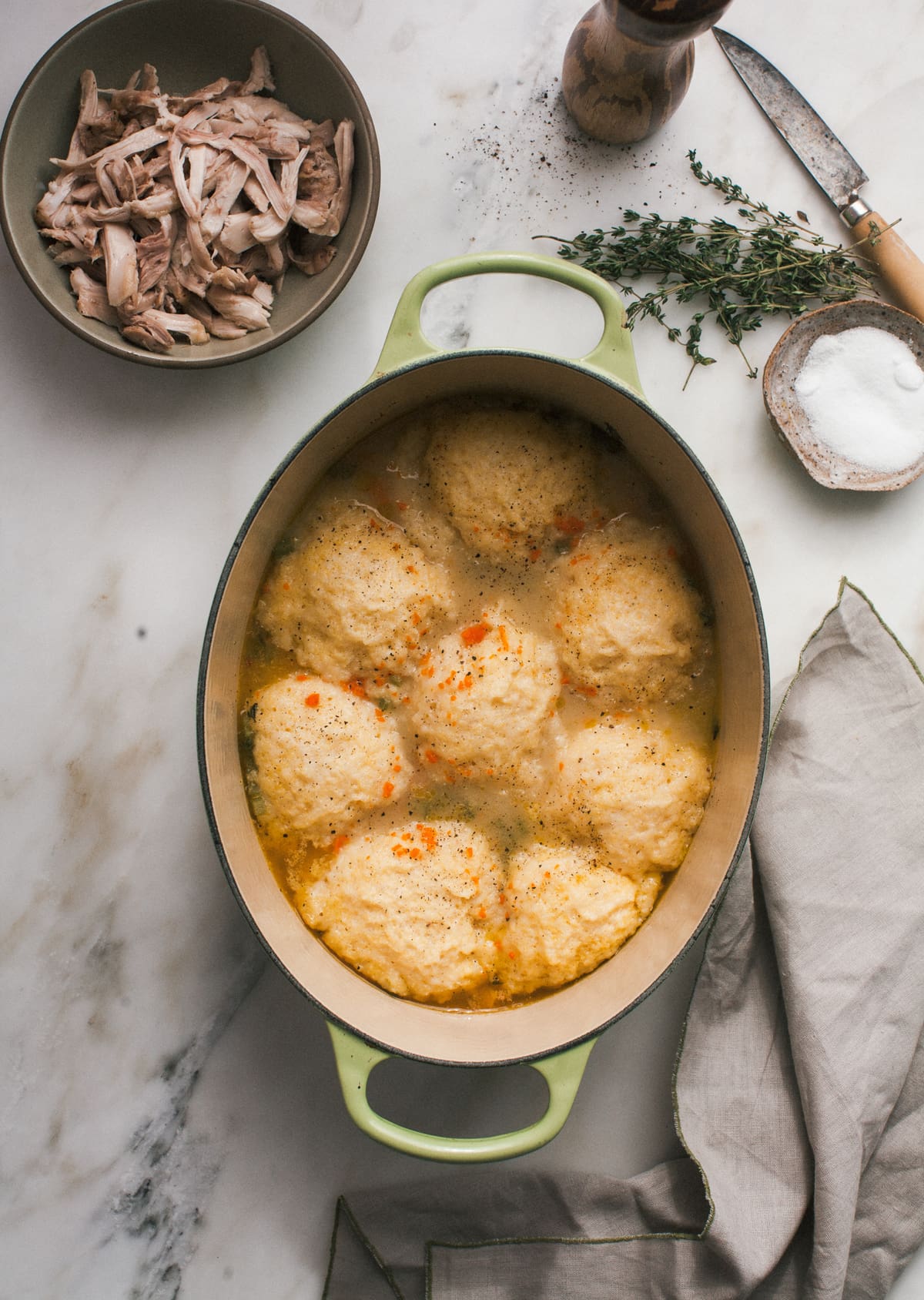 What is Chicken and Dumplings

The great folks at Wikipedia tell me that chicken and dumplings is a dish that consists of chicken cooked in water, resulting in chicken broth. And then brought to a boil with drop biscuits/dumplings added and then cooked.

This recipe is pretty Southern but I can think of a few other iterations from other parts of the world.

It’s a super comforting dish. The dumplings are cooked throughout with the broth feeling generous and warming. 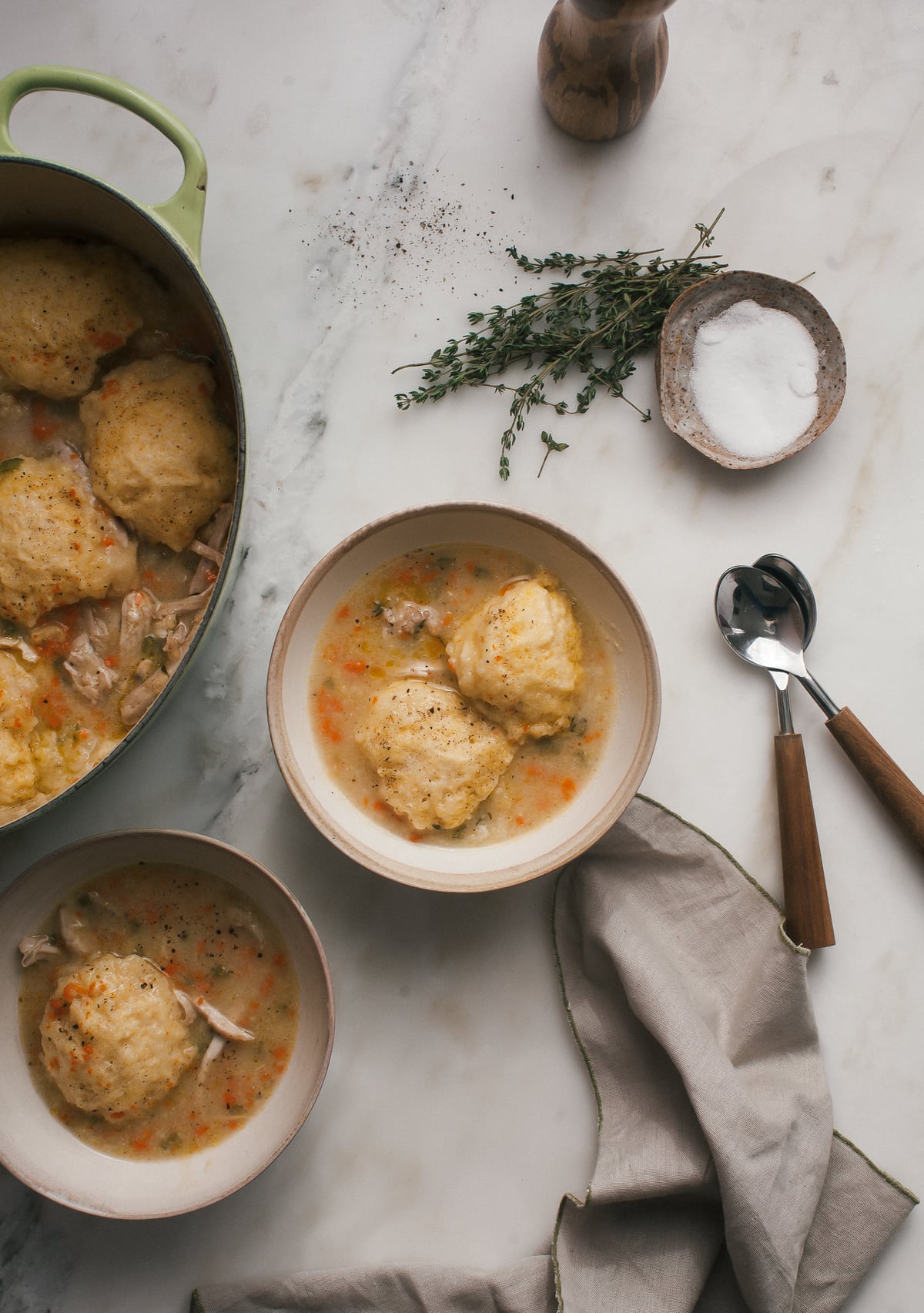 How to Make Chicken and Dumplings

This recipe couldn’t be simpler because it relies on a store-bought chicken broth. Of course, if you have some homemade chicken broth in the fridge, by all means use it!

Here’s Are the Steps:

– Sauté the onion, carrot and celery together
– Add the butter and when it’s melted, add the flour.
– The flour will dissolve into the melted butter, creating a bit of a roux. This will help thicken the soup broth
– Next, add the thyme. Thyme is a key ingredient in making any chicken soup absolutely delicious. It’s a MUST!
– After the thyme comes the chicken broth. Again, store-bought or homemade! Whichever one you have–both will work.
– Bring it to a simmer and cook for about 15 minutes, you really want the flavors married.
– While that’s going, mix up the dumpling batter. It’s super simple: buttermilk, a bit of leavening, salt, flour and corn meal. It tastes SO much like cornbread, it’s amazing.
– In the boiling points of the broth, you drop in the batter using a cookie scoop. Dropping it in the boiling point, creates a super fluffy cornbread.
– Cover the pot and that’s it! The dumplings will cook in about 5 minutes. 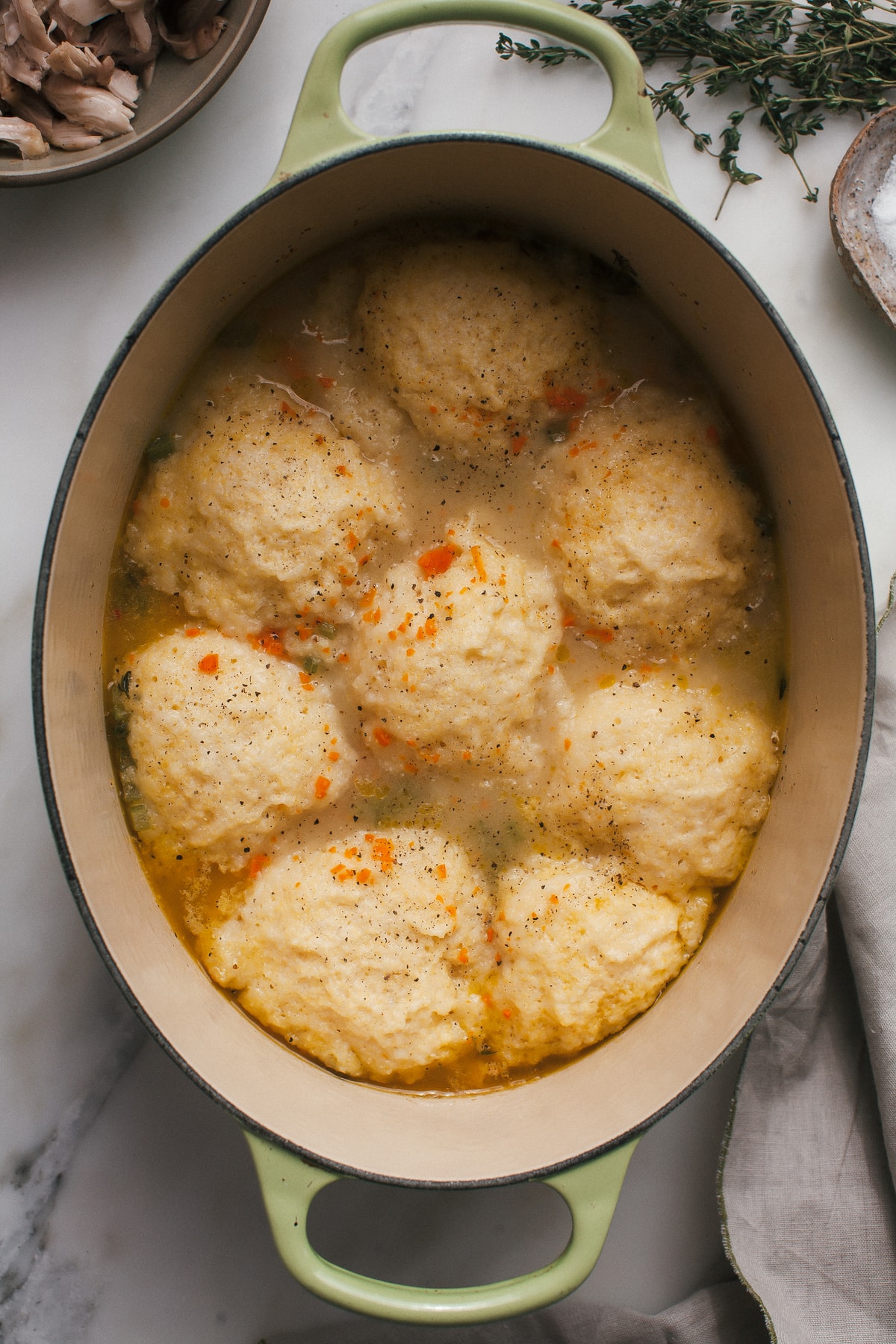 If you make this, for sure let me know on Instagram! 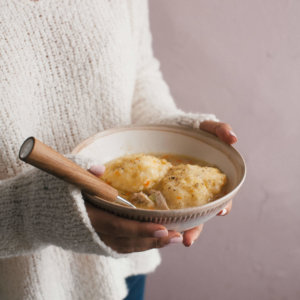 Adapted from The Year of Cozy 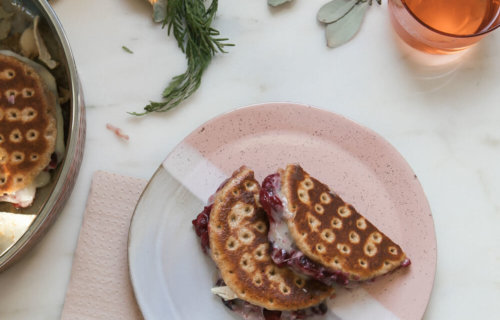 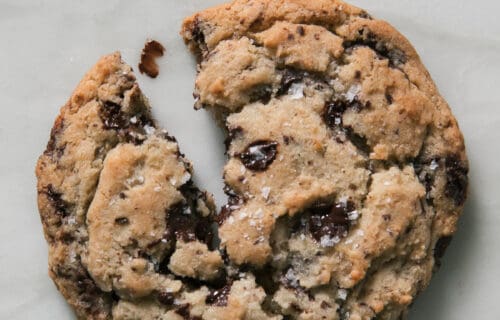 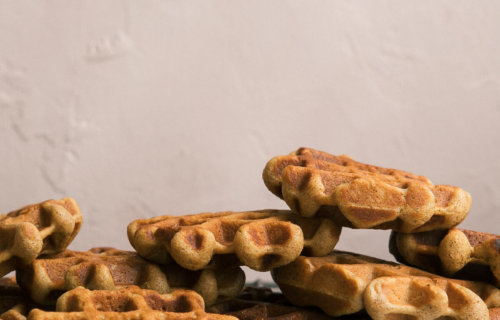