This recipe for Rösti yields the most perfect crispy potato crust. Here I dress it up with creme fraiche and caviar but you could easily just serve it with a fried egg for breakfast. 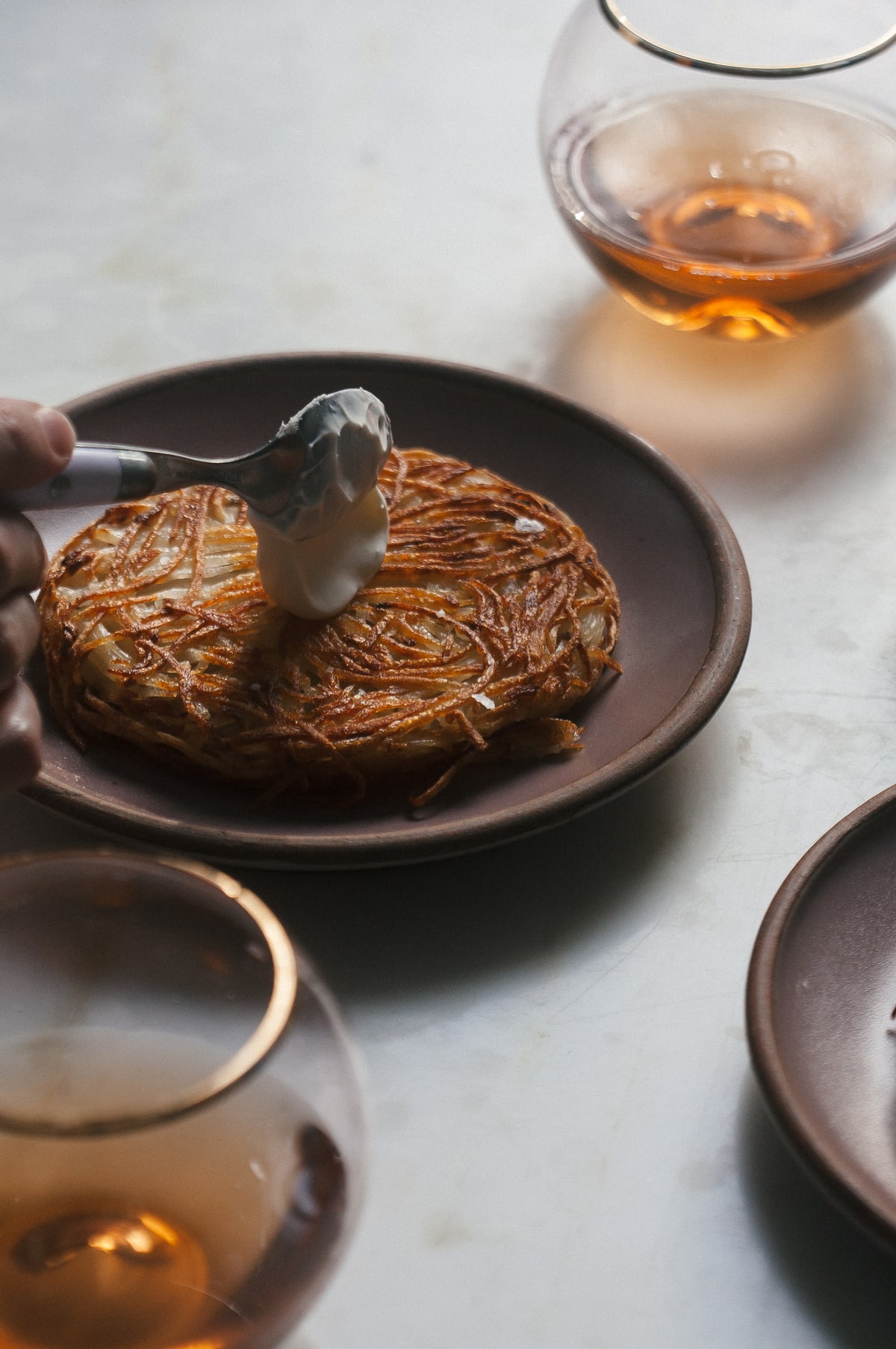 A rösti has been on my to-make list for a v v long time. If you’re unfamiliar, think of it like a latke but bigger and thicker. It’s more cake-like. I thought about making this rosti out of other things besides potatoes, but the thing I enjoy about them the most is their crispiness. And nothing in the entire world can get crisper than a potato. It’s made for dat crisp. Plus, the origin of the dish is Swiss where it was usually eaten with sausage as a breakfast dish. Potatoes and sausage is just classic breakfast combo.

What is the difference between a rösti and a latke?

If you’re asking yourself, “what is the difference between a rösti and a latke?!” not to worry, here’s the answer: A latke is held together with a bit of flour and egg, while a rösti is only held together with melted butter. It makes the execution a bit tricker.

Latkes are also much thinner than röstis which tend to be thicker and taller. Since there is no binder, the technique is pretty imperative. I used the technique from Chef Steps because they do a lot of good work over there and it was super duper simple. 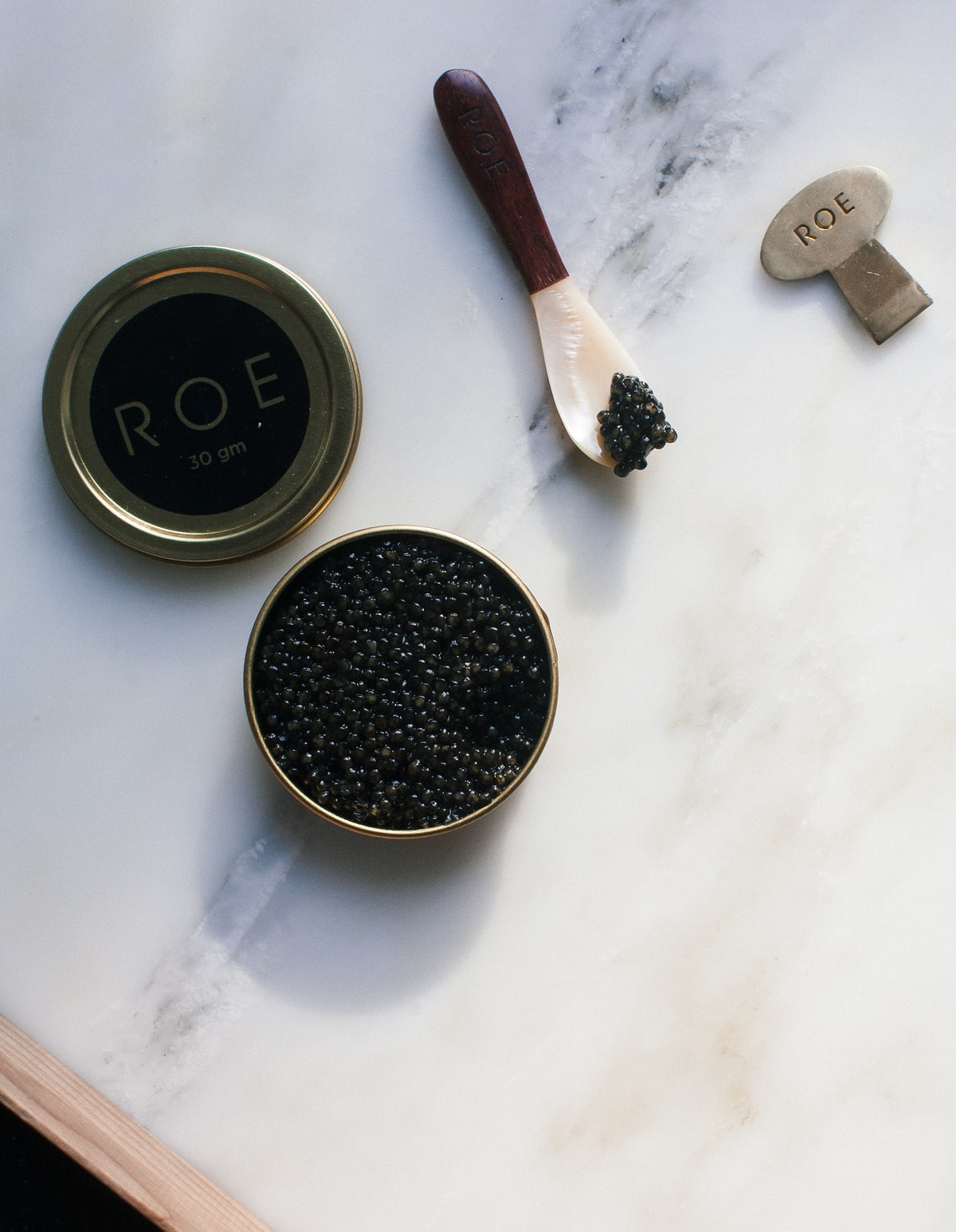 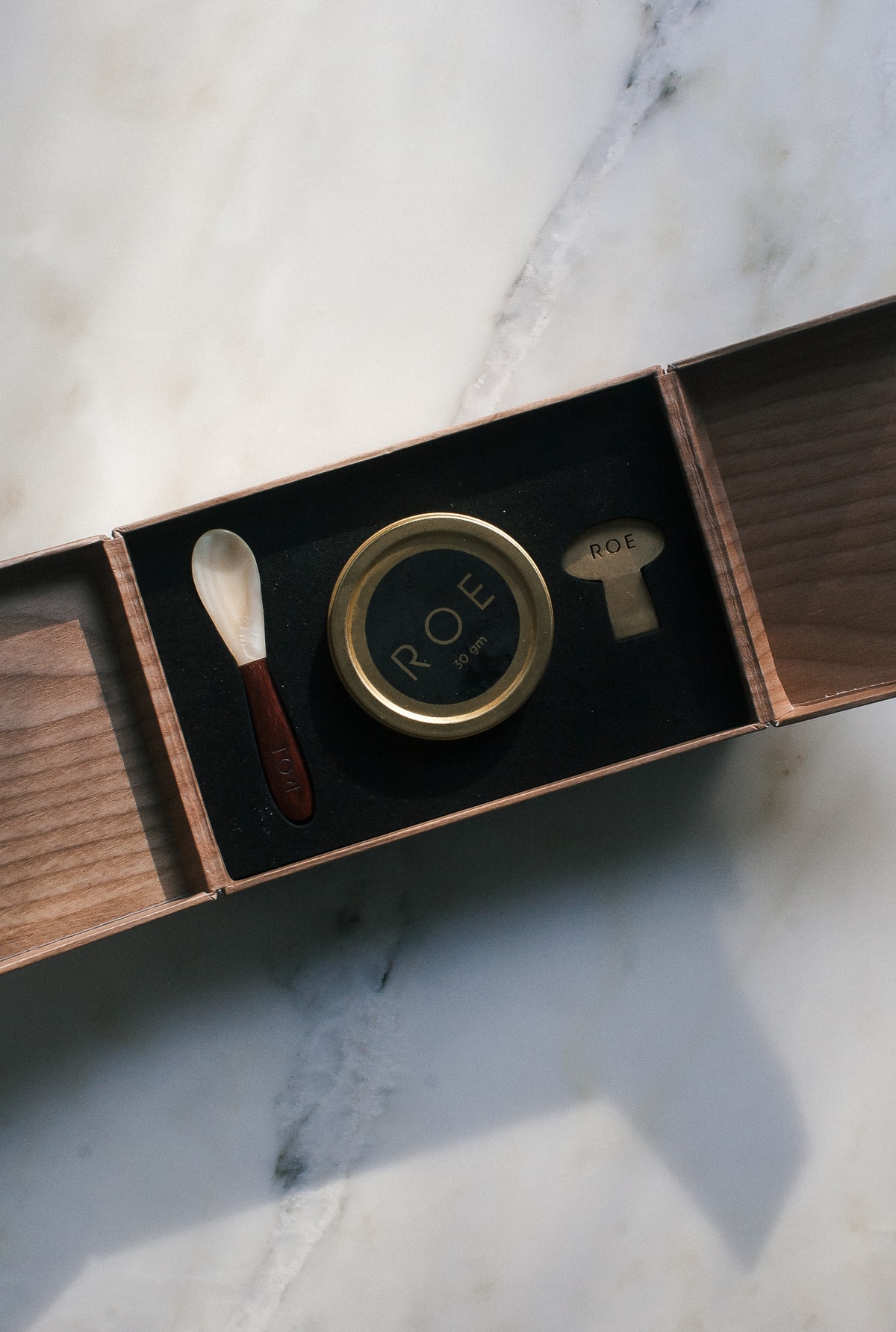 How to make potato rösti crispy:

Most important is that you want thin strips of potatoes and you want to dry them really well. You basically mandoline potato slices and cut those slices into strips. You’ll end up with long potato strips that are dried and then tossed with butter and a bit of salt. Those are packed into a pan, cooked on both sides and that’s about it. It couldn’t be simpler. 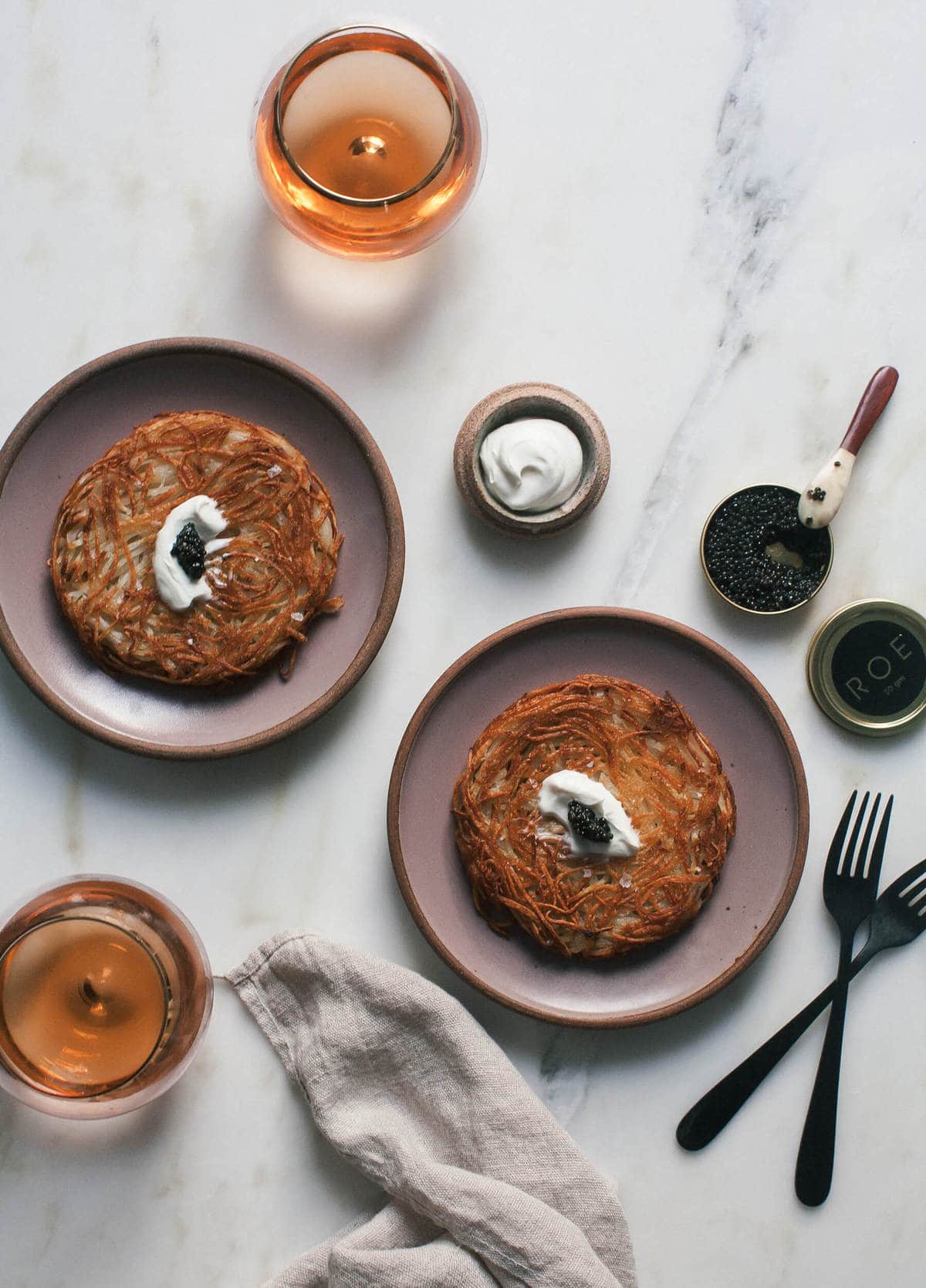 How to make potato rösti in the oven:

You always want to start the rösti on the stovetop then finish them in the oven. That way you get the initial crisp and then use the oven to help cook them through. The trick is to make sure you’ve got a pan that can be used on both the stovetop and inside the oven.

I made two röstis in mini cast iron pans but feel free to double the recipe to fill one cast iron or, honestly, use whatever pan you have. This is one of those recipes that is super flexible. 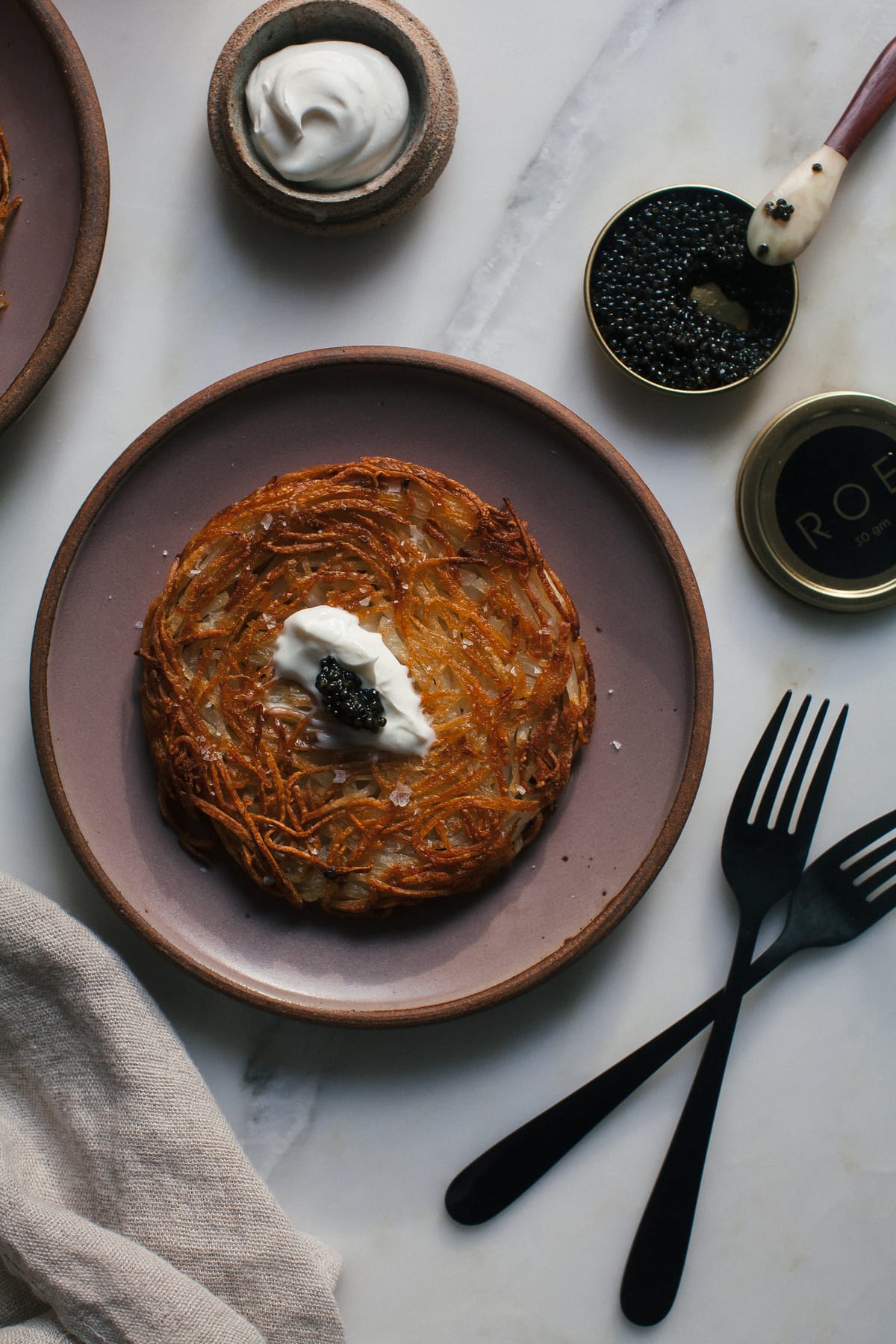 If you want to make these ahead of time, just prepare the potatoes up until the soaking point and leave them refrigerated in the water but only for a couple hours max. Too long and they’ll soak too much water and possibly discolor. 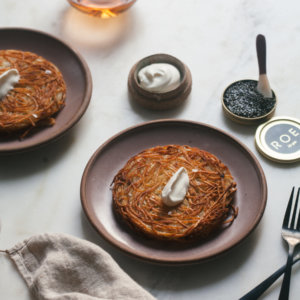 PRINT
Prep Time: 5 minutes
Cook Time: 30 minutes
Total Time: 35 minutes
Serving Size: 2 (5-INCH) RÖSTIS OR 1 (10-INCH) RÖSTI
Calories: 587kcal
This recipe for Rösti yields the most perfect crispy potato crust. Here I dress it up with creme fraiche and caviar but you could easily just serve it with a fried egg for breakfast.

Looking for more breakfast recipes? Here are some of my favorites: 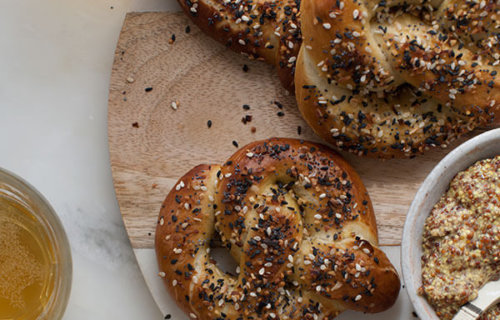 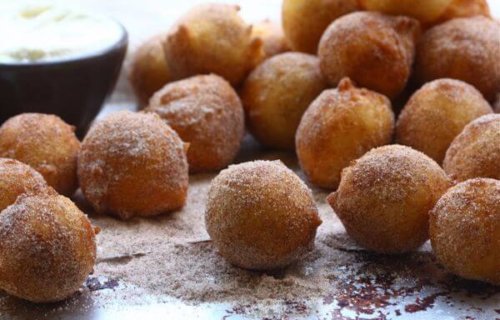 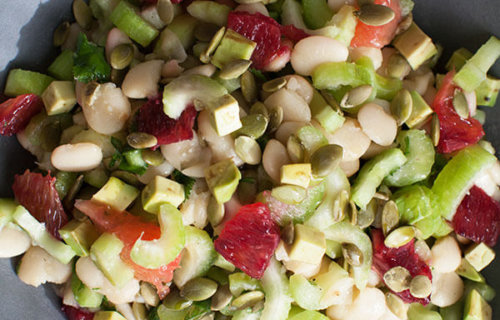