Published Oct 16, 2009Last Updated Jan 14, 2017
Leave a Comment
My love for biscuits started as a young lad. My mother was adamant that every night–no matter what was going on–we sat, as a family, and had dinner. Since it was the way things were, I… 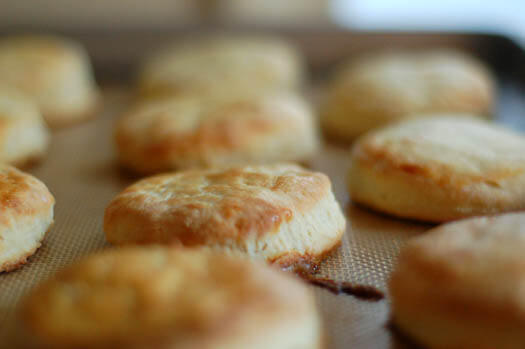 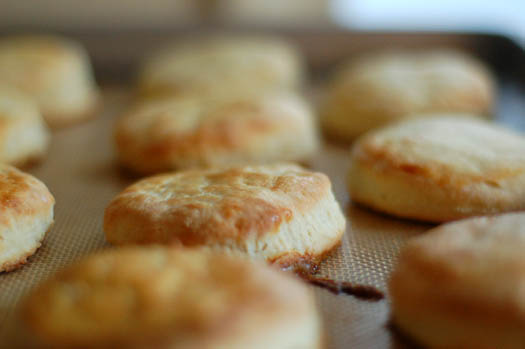 My love for biscuits started as a young lad. My mother was adamant that every night–no matter what was going on–we sat, as a family, and had dinner. Since it was the way things were, I usually looked forward to it, unless of course, I was watching something awesome on television like…My So-Called Life or Roswell, in which case I would grumble at the sound of my mother calling me in to the kitchen. She didn’t really trust my brother and I to do too much; the only tasks she asked of us were to set the table, make a salad, which till this day I still hate, and/or make biscuits.

Now you’re thinking to yourself, Homemade biscuits? Kids?! Oh no, we were totally content with the Pillsbury pre-made biscuits that came in the canned roll…you know, the kind where you peel the paper back and crack open the cylinder by slamming it on the side of the counter, then you’d peel the biscuits apart and stick ’em in the oven for 10 minutes. Those were the kinds of biscuits we were into. Homemade biscuits didn’t exist. My parents were too busy shuffling my brother and I to and from various practices, schools, club meetings and so on. But that was then. 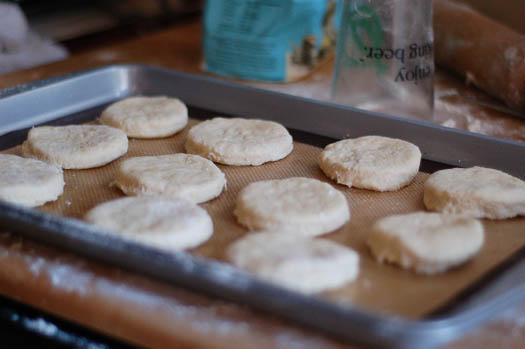 Now, they would scoff at such a thing; you see my parents begin their day by baking french bread at the break of dawn. Yes, fresh french bread–it’s no joke.

A few weeks ago, I was over Caroline’s house and brought over some buttermilk I had in my fridge (I figured we could do something cool with it). I was thumbing through one of her ten thousand cookbooks and came across a classic recipe for biscuits and remembered my fondness for them. I had never actually made real, homemade, classic buttermilk biscuits. And to my surprise, they were easy breezy. You can actually make these, flash freeze the dough and bake ’em up whenever you want fresh, warm biscuits for dinner. It’s basically the homemade version to the Pillsbury ones I ate as a kid–just as easy, sans preservatives. 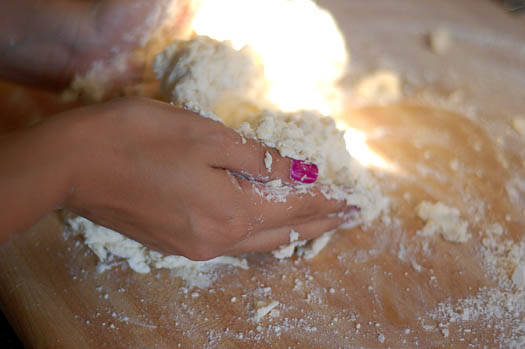 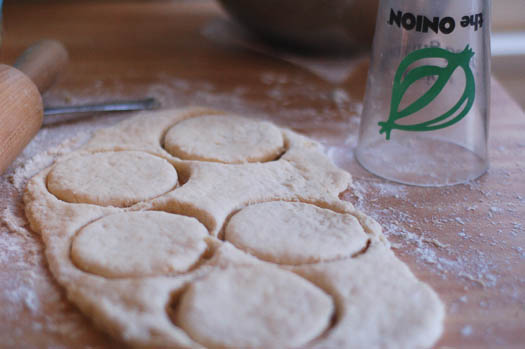 Pre-heat oven to 450F. In a large bowl, mix flour, baking powder, sugar, salt and cream of tartar. Working quickly, throw butter into flour mix and work it in with your hands until little balls form.

Make a well in the center of the flour/butter mixture and add butter milk all at once. With a large spoon stir mixture quickly, just until it’s blended and begins to mass and form a sticky dough. (If dough appears super dry, add 1 to 2 tablespoons additional buttermilk.)

Note: I’m pathetic and totally botched the measuring process. I measured wrong and they came out a bit thin. Make sure to grab a ruler and measure them out to 3/4 of an inch. You want ’em pretty and tall.

You can use a 2 1/2 or 3 inch biscuit cutter. I just used a pint glass from The Onion. Whatever works for you. Cut the biscuits out and arrange on heavy baking sheet. Try to get as many as you can out of the first roll. Gather the excess dough and roll out again and cut more biscuits. I’d discard the excess dough after the second roll out because they’ll turn out tough and chewy.

Place on upper third of oven and bake for 8 to 12 minutes until crusty and golden brown. Remove and enjoy with your favorite jam. 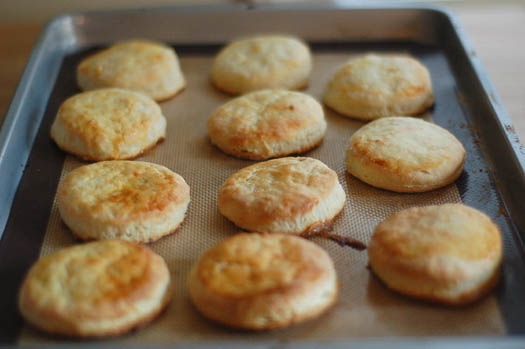 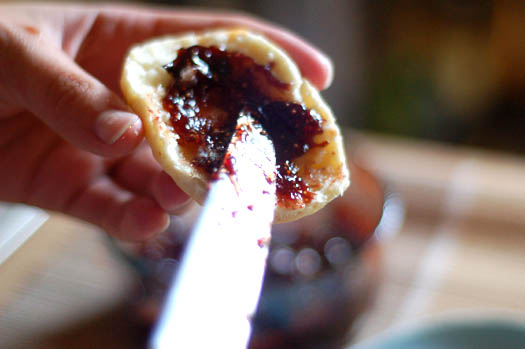