Published Feb 23, 2012Last Updated Jan 14, 2017
Leave a Comment
I’m doing a little series with Kin Community and I figured I’d share the first (of six!) video that was all about me making a recipe inspired by one of this year’s Oscar best picture nominations.… 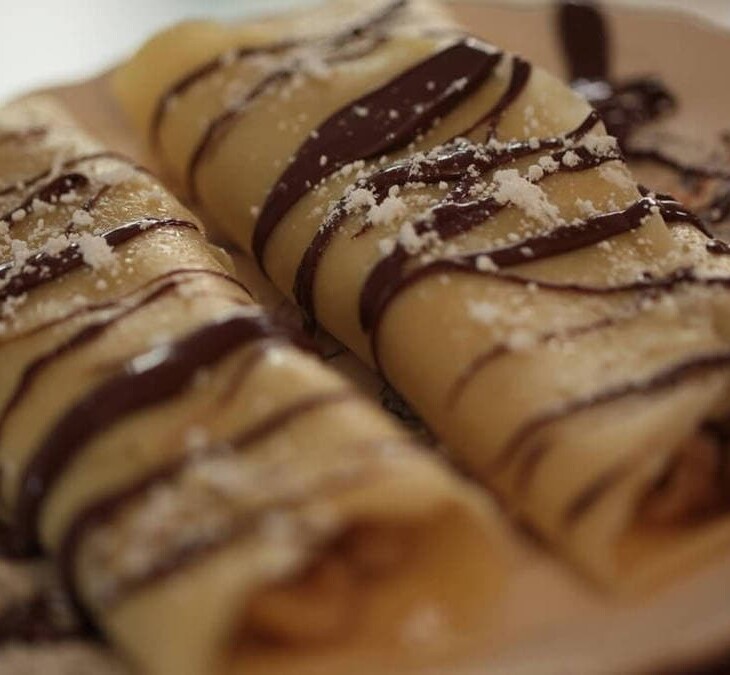 I’m doing a little series with Kin Community and I figured I’d share the first (of six!) video that was all about me making a recipe inspired by one of this year’s Oscar best picture nominations. I picked Hugo because the thought of making something inspired by my favorite movie this year, Tree of Life, seemed complicated and depressing. If you’ve seen Tree of Life, you know what I mean. Good gracious…that movie made me hate/love life (in a good way!). Hugo, however, was pretty adorable. I figured crepes would be cool, even though there’s really no eating in the movie–you know, ’cause they’re poor street children; so this recipe is probably what they wish they could eat. That’s kinda sad! Anyway, Hugo is a good movie–it’s Scorcese’s old man film. I totally dig it. So here you are…Chocolate Banana Bourbon Crepes.

P.S. Isn’t it weird hearing bloggers’ voices for the first time. I read so many blogs and obviously read all of their writing in my own head-voice, so it’s always super weird hearing their voices. Hope it’s equally as strange for you to hear mine. 🙂 xo

(Recipe after the jump!)

1. In a blender, add the eggs, milk, water and melted butter; pulse for a few seconds, until liquids are combined. Add the flour, sugar and salt. Pulse for 10 seconds or so and until flour is incorporated, being sure not to overblend. Transfer the batter to a bowl and cover. Place the batter in the refrigerator for an hour to rest.

2. Place a crepe pan over medium-heat. Brush the skillet with a light coating of butter. Add 2 ounces of batter to the pan, swirling it around until the bottom is coated evenly. Cook until the crepe edges’ pull away from the pan, about 1-2 minutes. Flip and cook on the opposite side for another 30 seconds. You may have to play with the temperature a bit. The common notion is that the first crepe goes to the pan, so don’t get discouraged if you have to try a few times to get the temperature right. When you’ve made a few crepes, transfer them to the oven to keep them warm, while you prepare the bourbon bananas and chocolate.

3. Melt chocolate in a double-broiler, or make your own by placing a heat-proof bowl over a pot filled with an inch of simmering water. Once chocolate is melted set aside.

4. In a small bowl, toss the bananas, brown sugar, bourbon and cinnamon together. Melt the butter in a small skillet over medium-heat. Once melted, add the bananas to the skillet and cook until bananas are softened and slightly caramelized, 3-4 minutes.

5. To assemble, lay a few crepes side-by-side and fill each one with the banana bourbon mixture. Fold each side over and drizzle with chocolate.