Published Sep 13, 2012Last Updated Dec 19, 2012
Leave a Comment
I really like weighing things. This is a weird Adrianna thing. I weigh everything I’m cooking, and sure I love precision, but it’s mostly because I just like weighing stuff. It’s the same part of me… 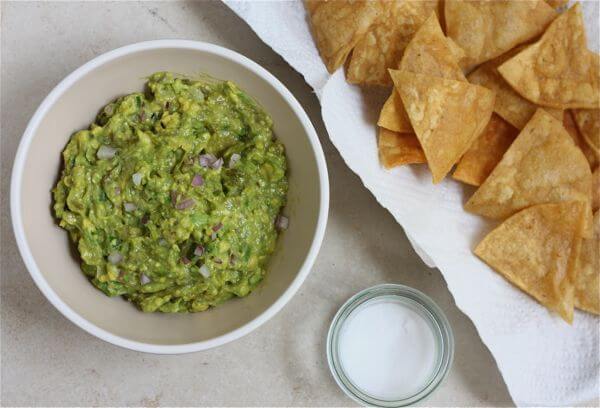 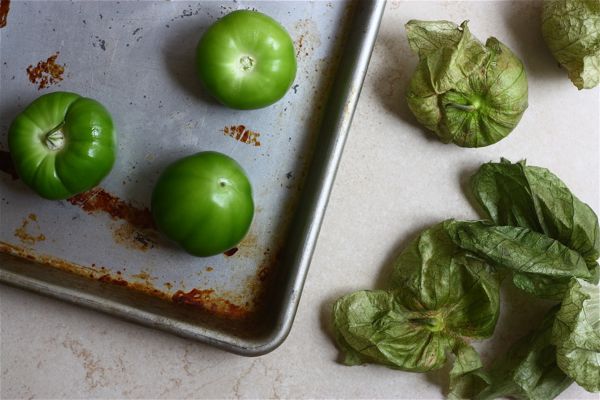 This isn’t normal guacamole. Instead I took advantage of the in-season tomatillos.

It all begins with charring cute little tomatillos under the broiler. 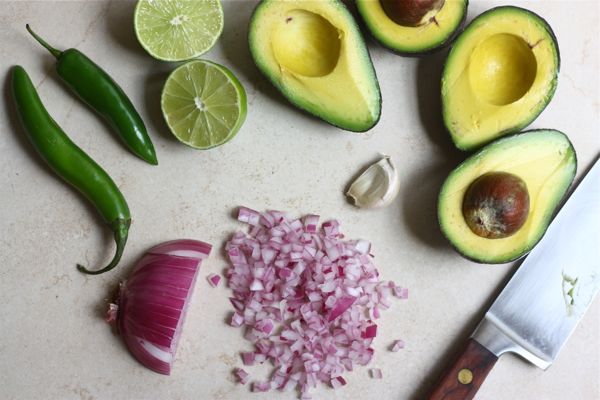 Even for people that cook a lot, broilers are scary. They’re usually located at the very bottom of your oven. It’s like this secret compartment that is dark, dungeness-like and hot. But they’re also a place where magical things can happen. Like charring little green tomatoes to perfection. So fear not, and instead just make sure you’re close by and go to town.

After the tomatatillos are charred, they’re minced up, which will result in basically an incredible flavorful and tangy mush. That’s mixed in with the usual players in guacamole: red onion, jalapapeño, garlic, lime juice and avocado.

For this recipe, I figured it’d be nice to make my own chips by frying up some corn tortillas myself. I know the entire world is usually against frying stuff, because it’s usually messy and annoying, but I only did it in about an inch of oil and it ended up being worth it, so I do highly recommend.

This guacamole, unlike most of its kind, is actually okay being made hours before–it won’t turn scary shades of brown due to oxidation. There’s enough acid in it–from the tomatoes and lime juice–to make it stay a pretty green color for hours in the fridge.

Perfect for a weekend snack. Or those football parties people are having. Or for just simply eating in celebration that your scale is just broken and not a mean, cruel person. 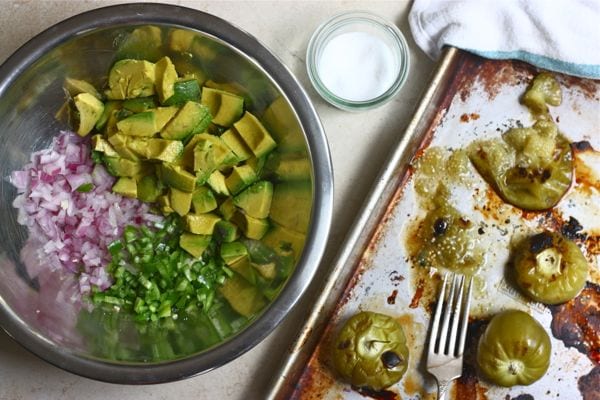 1. First we’re going to fry the chips. Add about 1 to 2 inches of vegetable oil to a cast iron skillet (or any deep- set pan or pot of your choice). When the oil is hot (or reads 350 degrees F on a thermometer), gently add the tortillas, being sure not to overcrowd the skillet. Fry them for about 1-2 minutes, flipping them at the 1 minute mark. Drain the chips on paper towels and sprinkle with salt. Repeat the fry process until you’ve gone through all of the tortillas.

2. Preheat your broiler. Place the tomatillos on a baking sheet or in a shallow baking pan, and transfer them under the broiler until the tops are charred, 7 to 10 minutes. Flip the tomatillos over with tongs and broil until charred on the opposite side, about 2-3 minutes more. Remove and allow them to cool slightly. Transfer them to a cutting board, and removing the stem membrane, chop the tomatoes finely. The tomatatillos will be more like a mush–that’s okay! Set aside.

3. In a medium bowl, combine the onion, garlic, peppers, lime juice and avocado. Mash the avocado using a fork and incorporate the other ingredients in the bowl. Fold in the mashed tomatillo. This is a good time to salt to taste. I ended up adding a little more than a 1 1/2 teaspoon of salt. Serve immediately or wrap the bowl with plastic wrap and refrigerate until chilled, about 1 hour.